Getting to Hix’s was an interesting experience. As a South of the River girl with a long term history of adverse events occurring on past visits to East London, this was comparatively new territory for me. Stories of a restaurant located within spitting distance of Smithfields Market, one of the best meat markets in the world, serving fantastic steak was enough for me to brave the journey. I had been telling anyone who would listen from Wednesday onwards in great detail about the huge juicy steak that I would be eating come Saturday night so there was a lot of anticipation.

After consulting the net the logistics looked simple enough, tube to Farringdon and a 2 minute walk. This would have been fine had some mentalist at Transport for London not decided that this would be a good day to a) close two of the three lines that serve Farringdon b) close Farringdon station itself and c) not put this on the TFL website. I hate arriving late for a restaurant booking and I especially hate arriving flustered. It always, always results in the need for a big fat cocktail (well on second thoughts this part isn’t so bad so maybe I should arrive flustered more often). The restaurant staff were lovely about it so, bar a taxi across East London, no damage done. The restaurant is actually very well located down a secluded little side street just off Cowcross Street. 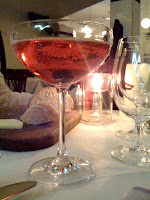 I started with the house cocktail known as a “Hix Fix”. Consisting of eau de vie soaked morello cherries and champagne; it was delicious but I would have liked more than one isolated cherry for my £14 (yes £14, we’re in Ritz price territory here…) . It was served in a beautiful flat, 1920’s style champagne goblet which always scores bonus points with me. Mr H opted for Mark Hix’s own brew of beer, the Hix Oyster Ale. I also liked the touch of being offered either a glass or tankard (what man is going to turn down a tankard!?) The ale itself was very dark with a bit of a treacly aftertaste. Real ale is not my thing but I’m told it was quite yummy. 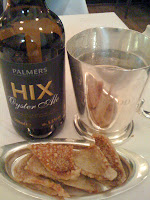 As a result of a lifelong love affair with anything porcine, I couldn’t resist nibbling on some pork crackling whilst I pored over the menu. It was served with a warm apple sauce which was the right side of sweet with a little bit of a tang. For me, the actual crackling was too hard. You genuinely felt at points that dental damage could occur, perhaps it was partly because the crackling was cold. For me the perfect crackling is salty and biting causes a firm crunch and leaves your lips shiny with hot grease.

Before ordering, a “steak tray” was brought round with all the different cuts being offered that evening. We opted to share the 1kilo Porterhouse as a result which has both the sirloin and the fillet on either side of a T-bone. The hangEr steak did look really beautiful though (and this was confirmed when I was later caught gawping at a neighbouring table’s plates so if I were to go again I would definitely try this. At £16 for a very large portion this made it even more of an attractive choice. 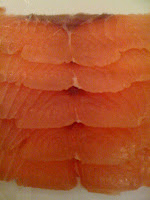 My starter was smoked salmon served with warm slices of Corrigan’s soda bread which had a nice sweet nutty flavour to it. The salmon had been home smoked by Mark Hix at his farm in Dorset. It did have a fantastically deep smoky flavour to it that you just don’t get in most other smoked salmon but I am terribly spoilt by having a Dad who home smokes his only salmon amongst other food. I think his is the best salmon in the world but then again Mr Hix’s tasted the same so in some ways that is the ultimate compliment. 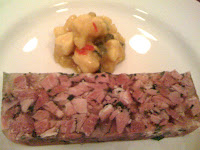 Mr H opted for the ham hock terrine with piccalilli. I had been put off this option by the description which included lots of references to jelly but in hindsight I really wish I had picked it (or is this just yet another case of food envy?) It wasn’t too jellyey at all and the piccalilli was very tasty,a light amount of curry and spice and not overly tangy but strong enough to cut through the fat and jelly of the terrine. It was also a whacking great portion so I did manage to scrounge a good amount. 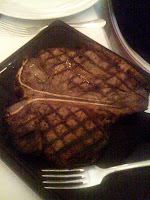 The porterhouse steak was a triumph. 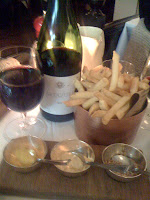 Cooked rare to perfection before being sliced at our table, we barely managed to finish it all between us. Definitely a cut I will be looking out for again. A side order of crispy “allumette” french style chips was served in a little metal bucket and three types of mustard appeared alongside.

Dessert involved choosing three portions between us. The sloe gin jelly shots were lovely but wouldn’t have been enough to constitute a dessert on their own so we added a slice of almond and cherry somerset eau de vie tarte with cherry cream. The cream was a bright pink and less sweet than I had expected with a slightly tart tang to it. I liked it very much but Mr H didn’t. 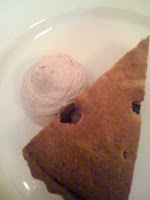 Our second dessert-proper was a steamed ginger pudding with custard. Now he won’t mind me saying this but being a northerner this was always more likely to be more of a winner with Mr H. Anything steamed is great but add custard and to him; that’s heaven on a plate. 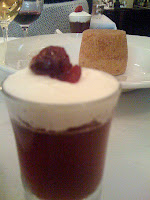 Both these desserts were accompanied by a glass of Lustau Pedro Ximenez (a well known friend that I know if always guaranteed to give me a sickeningly sweet blast of pure raisin nectar) and a glass of Jurancon for Mr H and the steamed pudding.

If I’m honest although much of my meal was delightful due to fabulous ingredients and good cooking I probably wouldn’t go again. We did really indulge in everything that we wanted from the menu but at £100 a head this still felt a bit pricey. It also didn’t feel as though you had had a special night out, it was just a bit too cool for school. The clientele are very casual and all a bit too Hoxton/Shoreditch trendy for me, but that’s just a personal thing. This hyper trendy vibe was enhanced by the Sue Webster and Tracey Emin art work on the walls and the offer of Stephen Webster jewellery designed for the restaurant. If oversized, black-rimmed glasses and drainpipe jeans on men are your thing you’d probably love it. Oh and definitely not for vegetarians!