The original Gazette is in Battersea SW11 and any reviews that I have seen have always been good, recommending the simple but effective menu and genuine Gallic style brasserie feeling. I had high hopes that the Balham outpost would live up to these reports.

The upstairs of Gazette is quite small and, I am sure, is light and airy on a nice sunny day or balmy summer evening. On an unnaturally chilly March evening, however, every new entrant was greeted by a shudder and a glare from fellow diners until the door had been firmly closed. Tables are in a long canteen style row so I wouldn’t recommend it for discreet romantic dalliances or a first date scenario. For a weekend supper with old friends it was perfect though. Tables are covered in blackboard paint and a pot of chalks is provided so once the wine starts flowing the table decoration becomes more and more elaborate. A small basket of sliced baguette was accompanied by a tower of proper salty butter; just how butter should be in my humble opinion. 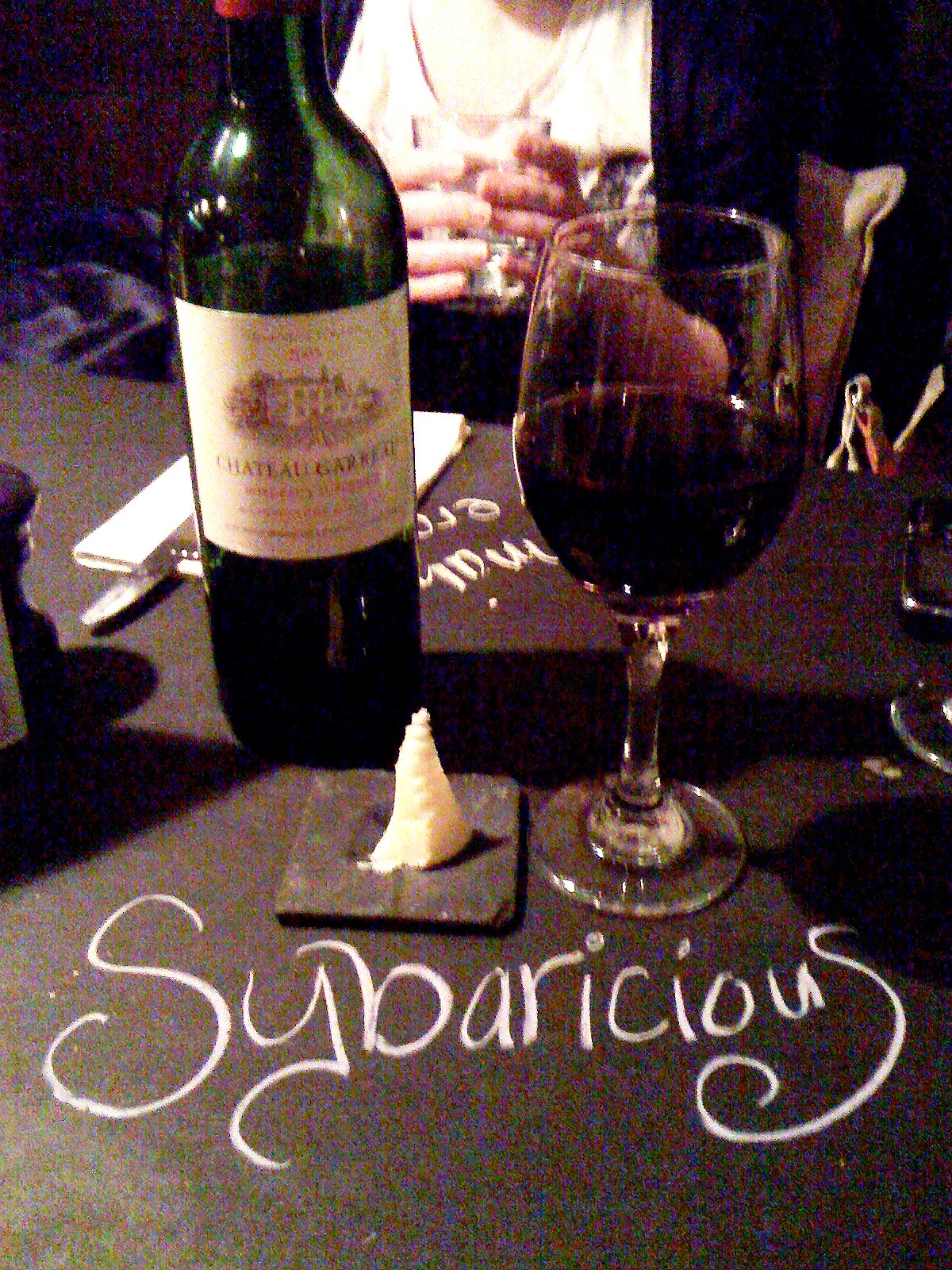 H ordered scallop chowder to start whilst L went for snails in garlic butter and I chose Oeufs Cocottes Meurette. It was some time before a waiter casually informed us that, in fact, there was no scallop chowder so Han belatedly changed to mussels in white wine.

L’s snails were served in a traditional French ceramic snail plate already out of their shells (all Pretty Woman moments therefore successfully avoided!). They were in a butter of garlic and carrot. 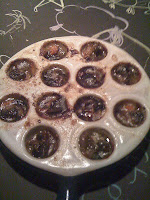 My Oeufs Cocotte were served in quite a deep and red hot Le Creuset pan. Pancetta and mushrooms had been pan fried in butter and three eggs added with some red wine. The result was very rustic (and very salty) but tasty if not particularly aesthetically pleasing. 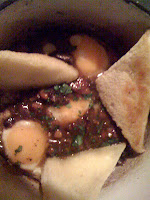 My main course was a sirloin steak with chips. The steak was big in surface area but quite thin which means that if you eat your steak blue like me, it’s going to be very hard for the chef to get it right. Mine was definitely rare and he didn’t do a bad job in the circumstances. I liked the way that chips were served in a pan lined with yesterday’s menu. It seemed like a quirky take on the old adage that today’s newspapers are tomorrow’s fish and chip paper. Bearnaise sauce was clearly home made in a little separate jug but had been sitting around long enough for a thick yellowy skin to form on the top. 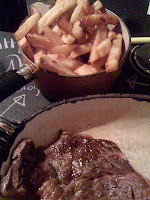 H ordered a tomato tarte which she reported to be very tasty if not particularly over exciting. L’s cod looked small but apparently quite a lot of fish was beaten into the mash and the flavour was nice.

During our main course the neighbouring table’s starters arrived. Well, one starter arrived. It transpired that the other person had ordered the absentee scallop chowder also but this time the waiter just hadn’t bothered telling her it was non-existent. To me this seemed to sum up the standard of service in Gazette. Red wine was poured up my arm clumsily and most questions or requests were greeted with a Gallic shrug, all that was missing was “Bof” on the end of it.

One of the common themes throughout the meal was that we had to wait an unnatural amount of time between courses. As a group of girls chattering away this wasn’t a problem for us but in other circumstances could have been quite annoying. I think this delay is caused by the fact that the majority of dishes on Gazette’s menu require oven baking and whilst their habit of serving all dishes in mismatching pans or Le Creuset skillets is quirky it also means a lot of oven space must be required and the kitchen really didn’t look that big.

I ordered a chocolate soufflé for dessert which was freshly cooked to order and was massive. A hole was pierced in the top of the soufflé by the waiter and hot chocolate sauce poured in. Not only did this add a degree of theatre to proceedings but was a welcome addition as otherwise I don’t think that the dessert would have tasted particularly chocolatey. 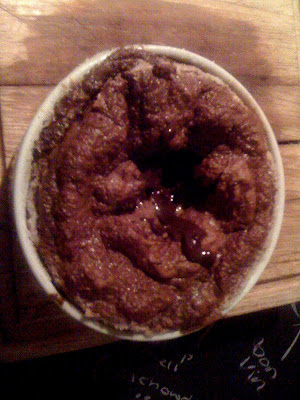 Hmmm the “and finally”. I couldn’t decide for a while whether to include the next bit in my review but decided as it was part and parcel of our experience I really should. In the (prolonged) wait between main course and dessert I spotted some form of insect crawling across L’s jumper. Upon closer inspection (and having both lived in & visited insect ridden countries in the past) we agreed it to be a cockroach. I drew the waiter’s attention to it and his reaction was to bash it to the floor and to crack a joke about how the restaurant really didn’t appreciate it when customers brought that sort of thing to their establishment. One thing is for sure, we didn’t bring it in and I didn’t appreciate the suggestion that we did. But, as far as he was concerned that was the end of the matter and I couldn’t be bothered kicking up a fuss. Ultimately however, this incident will probably be one of the main reasons that I don’t go back to Gazette again. The food was nice enough and I loved the idea of the upcoming fondue season followed by asparagus week but the cons outweighed the pros for me. There are plenty of other nice places nearby.