J&J were visiting from San Diego and have a well known penchant for all food Indian but we didn’t want anything too fancy for a casual Friday night supper nor did we want to venture West End so Khans in Clapham Junction was right on the money.

Upon arrival in the pouring rain the door swung open and a waiter blocking the doorway greeted us with “yyyeeeessss??” After managing to convince him that we did indeed have a booking we were allowed inside to wait whilst the previous occupants of our table finished up and left. Definitely a popular place to indulge in a curry fest on a Friday night!

Poppadums and chutneys were delivered promptly, nothing unusual in terms of chutneys, the usual mango, chillied pickles, onion cucumber offerings but all were tasty.

J&J tend to go vegetarian so opted for a vegetable korma and a pumpkin masala.   Being resolutely carnivorous (and also allergic to pumpkin) I can only go by their description but I’m told that the masala was quite spicy but bursting with flavour and texture.  It did also look quite pretty rather than the unidentifiable blobs in sloppy sauce that can be presented in some Indian restaurants. The vegetable korma was really delicious and even I might not have noticed the absence of meat as the sauce was so good. As kormas go it was a very sweet version with lots of coconut but this is a plus in my book. Steamed rice was nice and fluffy and lightly flavoured with cardamom. Garlic naan was not the most garlicky tasting bread I’d ever had but a subtle flavour is definitely preferable to the whole chunks of garlic you often get in Indian restaurants. 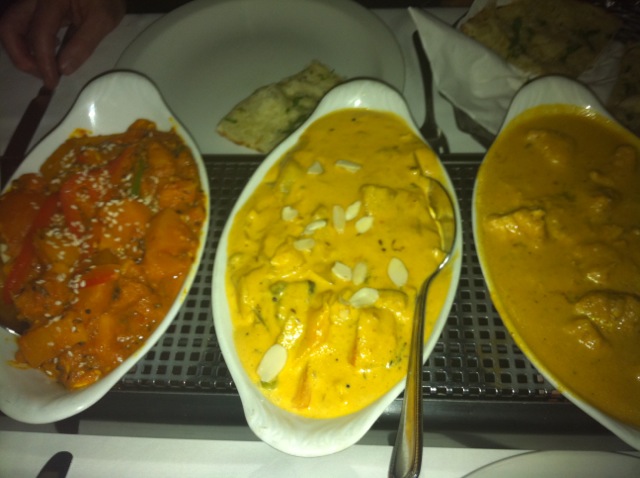 I chose a chicken pasanda badani which was chicken in a cream and saffron based sauce with pistachios. It had a very mild flavour but was enjoyable. I love that the curries are all kept warm on hostess trays, this is something that I thought had been dying out but very much still happens at the Khan.

The thing I like most about Khans is that they don’t use any ghee or colourings in their food. Anything containing cream or coconut cream is labelled on the menu so you are making a conscious choice to go for the less healthy option.

Ordinarily anything heralded as low fat or additive free sends me running for the hills as the resulting dish is usually a poor cousin to the one that you really wish you were eating but in this case I genuinely felt it was for the better. Sometimes clear evidence of fat in a dish makes you know it’s going to taste good, for example shiny pork crackling or an oozing creamy carbonara sauce however I’ve eaten many an Indian meal where the slick of orangey fat on the surface of a curry doesn’t make you think ooh “I’m in for a treat here”, more a case of “can I pour some off without anyone noticing?”.

My only gripe is that some of the waiters appear to have attended the Indian restaurant school of customer service where there must be training module 101 in upselling dishes as the practice is so ubiquitous. “Poppadums? You’ll have 3 each?” “no thanks just 2 each” “You’re sure?”  and then later on; “no starters only mains? And sharing rice and naan, not each?” Desperate times call for desperate measures I guess as even after our bill had been requested and arrived “Can we get you anything more, drink? food?”

We ate on a Toptable.co.uk offer of 40% off which meant that the total bill came to £30 for 3 including beers. Bargain.

I haven’t tried it (but definitely will do!) but you appear to be able to order for delivery online also.

UPDATE: I have now had Khan’s delivered to home on more than one occasion and was really impressed, decent discounts are offered for home delivery and the food was just as good quality, can highly recommend!