I loved Burger & Lobster and that’s why, bizarrely, I struggled to write this post. I’m not good at sycophantic and tend to veer more towards glass half empty than half full. In advance of my visit I had only heard good things about B&L, surely there must be something negative to write about it?! But there isn’t. Really, there isn’t. From start to finish it was one of the best meals I have had in ages.

Following what seems to be the current London trend, reservations are not possible. Therefore on a Saturday afternoon I was anticipating some lengthy queuing. This initially seemed true when an hour to an hour and a half was the estimate by the lovely, smiley lady on the door (such a nice change from many clipboards queens in no reservation establishments). What was a pleasant surprise was that you don’t have to physically queue, you can toddle off and await a mobile ‘phone call summoning you back. This is brilliant for several reasons: 1) you don’t get cold 2) you can have a drink 3) most importantly it doesn’t make other diners feel hurried or crowded.

﻿One of my pet hates is the restaurant which misrepresents the wait knowing that you’re going to be stood there like a lemon for upwards of half an hour whilst being upsold drinks. I’m relieved to say that this couldn’t be further from the truth at B&L. We popped our heads in after an hour and a window table was ready and waiting.

Lots of other recent London eateries are currently very niche in their menu, whether it be burgers or bbq etc however B&L takes menu minimalism to a new level. Three options: Burger, Lobster or Lobster Roll. Admittedly you then have the decision of cheese/bacon on the burger or steamed vs. grilled lobster but that bit isn’t rocket science (cheese AND bacon please). The drinks menu is the main area that offers choice.

Like any committed carnivore, I’m never averse to a juicy burger but when both lobster and burger are on offer (especially when they are at the same price of £20) there is no contest for me, lobsters win hands -or claws- down. H, on the other hand, was happy to go down the route of burger so game on with the cow versus crustacean comparison! 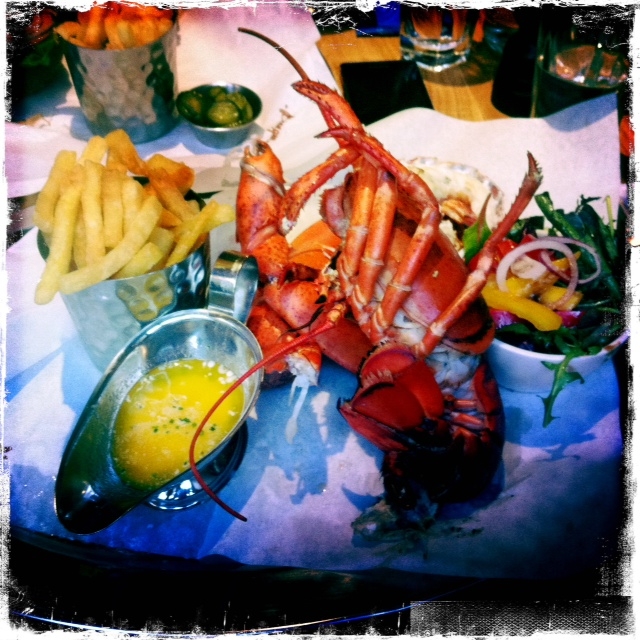 When it comes to lobsters, for me, size DOES matter. My grilled lobster was thankfully a big, fat specimen- after a lobster-related fiasco at Claude Bosi’s Fox & Grapes last summer, I’ve always been suspicious of lobster size. The next table actually laughed at me when they caught me just sitting and smiling at it for a minute or two. Lobsters are flown in live en masse from Nova Scotia twice a week then placed into two large tanks (which you can visit if you ask nicely and they aren’t too busy). On the day I visited 600kg of lobster had just arrived. That is a whole lot of lobster.

On to the all important question of taste. Full marks go to the garlic butter that accompanied it. Warm and oozing a not overpowering amount of garlic, it was lifted by a gentle lemon flavour which truly brought out the sweetness of the lobster flesh. I’ve had garlic lemon butter themed dreams ever since. Maybe it says something about me, but I’m always a bit diappointed if a lobster is presented ready cleared out with the meat carefully placed back in the shell. Sure put a crack in the claws and halve the chap but let me do the dirty work digging out every last morsel of meat. I had my opportunity in spades at B&L and what I had thought might be a superfluous branded plastic bib turned out to be utterly necessary.

The burger was excellent, cooked quite rare, particular praise was offered by H in relation to the pot of gherkins – the best ever tasted I was assured. *Warning* those who know me might be about to die of shock. It’s an underestimation to say that I’m not a big rabbit food eater, cucumber repels me and watery iceberg leaves me cold.  However, the side salads that accompanied both burger and lobster were something of a revelation for me; simple but effective. Nice variation of dark green leaves, pretty little yellow heritage cherry tomatoes, strips of red and yellow pepper and slivers of red onion in a tangy dressing. For the first time ever I finished my salad. So proud.

There has been plenty of discourse over why anyone would pay £20 for a burger when a whole lobster is on offer at the same price but apparently the ratio of orders at lunchtime is current about 50/50 (although lobster tips the balance in the evening). It was a very good burger but both H and I agreed that on our next visit it would always be lobster.

If you were to put a gun put to my head and force me to find a fault with Burger & Lobster it would be the fries. Many other blogs have waxed lyrical about the golden crispy seasoned fries but, given the option, I prefer mine to be a bit softer inside and less salty. The thing about salt is that it’s quite personal; you can always add more but you can’t take away.

Two desserts are on offer; chocolate mousse or lime mousse so you had better like mousse. Served in a paper tub like a big version of a theatre ice cream, the chocolate mousse wasn’t earth-shatteringly original but was very chocolatey and very tasty and that’s all I need a mousse to be. After all the burger/lobster is truly the main event here. 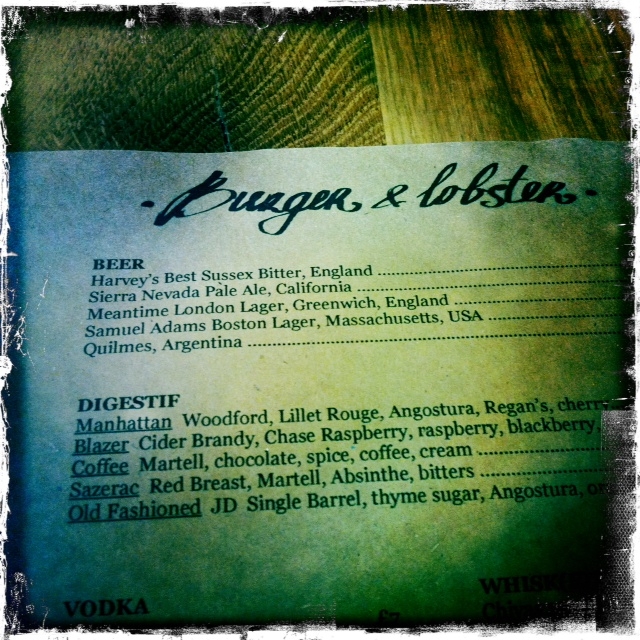 The drinks list is not extensive but provides enough choice at a wide enough spectrum of price points. My favourite Perrier Jouet Belle Epoque is a comparative bargain if you’re splashing the cash at £120 (on the basis its over £100 from a vintner) and wine starts from £15 a bottle. The cocktail list is fairly eclectic with a lot of egg white in there. I know that there is trend at the moment for old fashioned cocktails however I’m always going to struggle with the idea of raw egg in my drink I think. We tried the Bull and Beat (sp?!)  (Woodford Reserve, blackberry, raspberry, mure and zinfandel), the Clarges Buck (Chivas Regal, velvet falernum, lemon ginger syrup and pale ale) a Coffee disgestif (basically an Irish coffee of Martell, chocolate, coffee, cream and spice) and a Manhattan (Woodford Reserve, Lillet Rouge, Regans, Angostura and cherry).  All were nice if not mindblowing although the stand out ingredient for us was the Luxardo maraschino cherries in the Manhattan – a jar will definitely be joining my cocktail cabinet very soon.

Décor wise B&L surprised me a little. I had preconceptions of something rather more rustic and dark in line with other recent openings. Although it’s far from fine dining, and whether it’s due to the Mayfair location or the restaurant’s Goodman pedigree, its pale interior was rather smarter than I had imagined.

I really hope that B&L is able to maintain its price point and simplicity as, for me, that is the key to it remaining an outstanding restaurant rather than just a good one.

Clearly Burger & Lobster isn’t only hitting the spot with us mere amateur foodies, Angela Hartnett was sat at the bar during my meal and apparently AA Gill had been in earlier.  Were he not the epitomy of discretion, delightful and chatty front man Alex could soon be worse than a London cabbie: “Ere you’ll never guess who I had in the back of my cab the other day…..” And that is no bad thing when the people who are visiting really know their stuff.  In the words of one celebrity who- to the best of my knowledge- hasn’t yet been to B&L – “I’ll be back”.