In my last post I suggested that I thought I needed to eat somewhere truly terrible just to avoid being so constantly and irritatingly sunny and positive. It doesn’t suit me. Try as I might I’m more a glass half empty kinda gal (usually because I’ve drunk it). Although Casa Brindisa in South Ken was far from “truly terrible” it certainly had enough fatal flaws to sharpen my claws on and ensure that I don’t visit again. Probably ever. 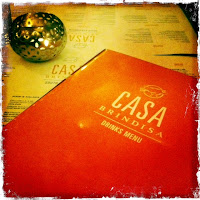 Now don’t get me wrong, I really did want to like it and I tried very hard indeed. I love Brindisa. If ever I need decent paella rice, quince paste, chorizo or any other number of Spanish ingredients, their Borough shop would always be one of my first ports of call, however that doesn’t mean that they can automatically use those top notch ingredients to serve up a good meal as V and I found out to our detriment.

Croquetas are one of my favourite Spanish dishes and as such I tend to have high expectations. Although they won’t be taking the Croqueta Cup for the best ones that I have ever tasted the ham and chicken ones were good and consequently the highlight of the meal. Nice and light with thin strands of chicken and ham flecked throughout the creamy interior and just being held together by the crispy outer shell. I would have those again.

Beetroot and Picos blue cheese salad with walnut vinagreta had all the markings from the menu description of being very tasty indeed. The individual ingredients were indeed rather yummy. That said the salad had not been very well combined, lacked enough interesting dressing and walnuts seemed added as a sort of “oh bugger they’re on the menu so we’d better add them to the plate” afterthought. Not a bad side dish though. 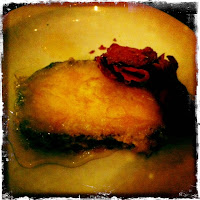 Baked goats cheese was never going to win any beauty paegent prizes and was a bit too sickly due to the honey it had been soaked in after being deep fried. It was quite tasty in a creamy rich sort of way and as a part of a tapas selection but even with my propensity towards rich and sweet food I couldn’t have managed a whole one. Perhaps adding something tangy to cut through the sweet cloying cheese may have improved it. 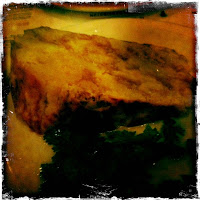 Tortilla: Imagine a balmy summer day, blue skies punctuated by fluffy little cotton wool clouds, sat on a blanket with a bottle of something chilled and fizzy. Wouldn’t an accompanying slice of cold tortilla be rather tasty? Contrast that mental image with a window table in a restaurant on one of the coldest nights this winter with other piping hot food on the table, and a cold tortilla is just disappointing. (I did check and it was apparently supposed to be served “between hot and cold” – it wasn’t.) Flavour was added by the presence of caramelised onions in the potato and egg mix but the brown of the sweet onions also had a slightly unfortunate aesthetic effect rendering it not dissimilar to an eve’s pudding mix where the apples have been left out a little too long and oxidised brown. In all though, it was rather hard to detect any distinct flavours in the tortilla itself as someone had drenched the dish prior to serving in olive oil Jamie Oliver stylee. This bath of oil meant that not only did the dish look greasy, but all I could taste was a strong flavour of oil which was a shame.  I’m convinced that had the dish been fresh and warm without the oil innondation it would have been a really pleasant tortilla (although sadly not as good as the one at Tortilla Trophy winners Angels & Gypsies).

Vegetarian bomba. £2.50 giant croqueta of vegetable, breadcrumbed and fried. Nice enough to make it worth its £2.75 price tag. 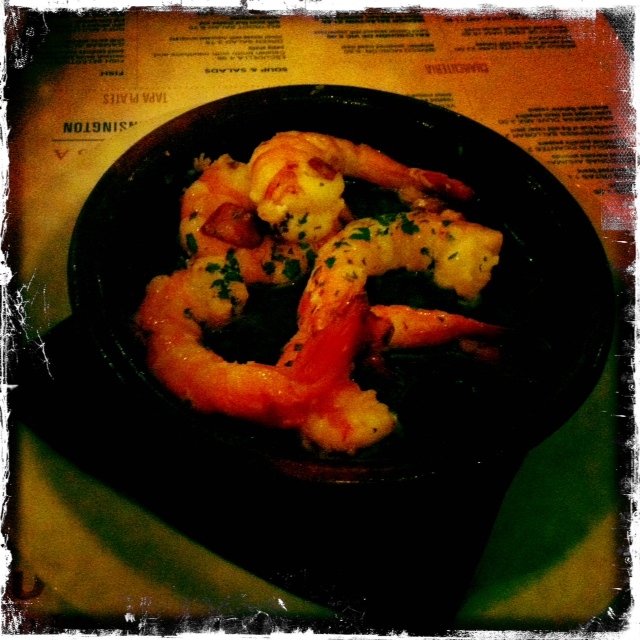 King prawns with garlic and chilli  The prawns were juicy and succulent with a sweet flavoured flesh although perhaps this sweetness was enhanced by the overwhelming burnt flavour of the scraps of garlic and chilli in the oil that they were sat in. There was no spicy kick to these prawns at all. I’m sad to say that I’ve inherited a pretty rubbish chilli tolerance level from my father however even when I intrepidly chewed on the burnt, dried out husk of a chilli languishing in the oil, heat effect was minimal. Not even a warm, tingly murmur.

Iberico de Belota Chorizo came served in thin slices and was a very generous sized portion indeed, so much so that half of it needed to be taken home and will certainly not go to waste. Provenance of great ingredients is not in any doubt here. There is, however, disparity in the pricing of dishes; five indifferent prawns for £8.50 or enough chorizo for four for £5.25. Granted the prawns involve more preparation but that chorizo was fabulous! Rich and greasy with just the right bite of smokey paprika, I would have been happy paying the same for a good third less.

Service was quite random, one two occasions the same waitress bought differing trays of someone else’s food to our table and tried to serve it. On other occasions catching an eye became something of a game. 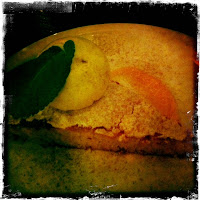 The service lowlight for me, however was when dessert arrived. A slice of almond cake was served sat on top of an ugly smear of orange coloured puree. Rather annoyingly, I’m allergic to a variety of fruits and veg (not great for someone who enjoys food as much as me!) and therefore have to be a bit careful about what I eat so we thought we’d better check it out. Dialogue follows:

Me: “hi, is there any fruit in that sauce please?

Me: So you’re absolutely sure there is no fruit in there”

Me to Waiter 2: “Hello, your colleague said this was caramel but it seems to contain fruit. This is rather important as I carry an epipen and have an allergy to some fruit and veg that can cause anaphyalxia”
W2: “I’m pretty sure it’s a sweet potato sauce”
Me: “Well that would be a problem as I’m allergic to sweet potato”
W2: “I’ll check but sometimes its sweet potato and sometimes they change it….. *disappears then returns*…….Its orange so you’re fine”.

Yes, I understand that those with allergies need to disclose it and I also get that kitchens do change sauces etc but a) I specifically asked what was in the sauce and was told the wrong thing by two consecutive waiters and b) they seemed really unconcerned about the possible ramifications of having given me incorrect information twice until I really rammed it home by pointing out that ambulances taking customers away isn’t particularly good for business and can be avoided by ensuring that waiting staff know what it is that they are bringing to the table.


Our other dessert of Turron Mousse with PX soaked raisins was pretty decent and not bad value at £5.50 but more raisins please!

On the wine front the cava that we ordered was nice (my favourite non-committal adjective again). A glass of Pedro Ximenez Verastegui with dessert, however, was unlike any other PX I have ever tasted. Not in a good way either. It lacked the blast of raisiny, syrupy Mmmmmm that I normally look forward to in a PX. My fault really as I should have noted the description of “light in colour” but disappointing nonetheless.


In summary, Casa Brindisa really does have excellent raw ingredients. Their hams are unsurpassable. That said, any idiot can buy really excellent ingredients and put them on a plate, it takes a bit of culinary skill and alchemy to then turn those ingredients into something special and this is where Casa Brindisa just couldn’t make the leap for me. The true measure of value of a restaurant is when the bill comes. I have been faced with restaurant bills for several hundred pounds and not flinched because the meal has been so utterly excellent that I would happily have signed away the rights to any future first born child without batting an eyelid whereas on this occasion all eyebrows were raised in unison at £90 for two as this really didn’t feel like good value at all. Until my visit the name Brindisa had been synonymous with really good Spanish food but the South Ken outpost has not only shaken, but uprooted this belief. They really need to sort their act out if they aren’t to damage the brand for the other stores and eateries. on the other hand maybe the brand is to blame, had I eaten this meal at an unnamed tapas restaurant I would probably thought it ok and not gone out of my way to return but I expected more from Brindisa, hoisted by their own petard maybe? Rant over, promise.

PS If you have any suggestions for decent weeknight supper eateries near South Ken tube send them my way!