Kitchen W8 is a bit of a schlep for me from SW17 and after nearly half an hour winding through the side roads of Earl’s Court I was definitely hoping that Kitchen W8 would live up to expectation with a growing grumbly tummy. If the smiling welcome and warm, friendly service of the staff was anything to go by then I would be in for a treat with the food. 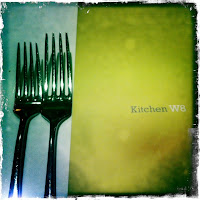 The interior of the main room of W8 is exactly how I would like to have my living room if I had access to an interior designer. Pretty wallpaper and gorgeous silver accessories and lights. It feels more relaxed, homely and welcoming than the more starched austerity of chef Philip Howard’s other London restaurant, the two Michelin starred Mayfair based Square. Perhaps Rebecca Macarenhas’ expertise with cosier neighbourhood haunts such as Sonnys in Barnes and Sams in Chiswick has combined with Howard’s culinary genius to create a match made in heaven. 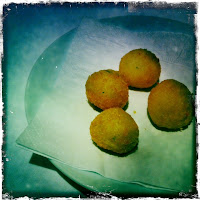 Kicking off with a glass of champagne (house bottle is Billecart-Salmon or Francois Diligent for rose) we were brought an amuse bouche of cod brandade balls. The first one was mainly light fluffy potato but the second had lots of flaky fishy flesh. A delicate lemony flavour really shone through and transformed what would have been a pretty uninspiring canape into something delicious. 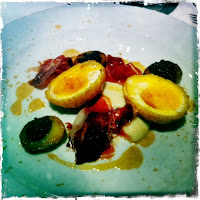 A dish of crispy hen’s egg, pata negra ham, truffled lyonnaise potatoes with a hazelnut powder was truly one of the most perfect starters that I have ever eaten. The egg was served halved with the yolk still gloriously runny with a crunchy, dark golden outside. The saltiness of the pata negra cut through the unctuous, rich yolk. The black truffle topped buttery potatoes were little bites of luxury that I was really cross I had offered to share with H. This was a dish that I immediately wanted to recreate at home but know that it won’t be a fraction as good. Every mouthful was a sheer delight. 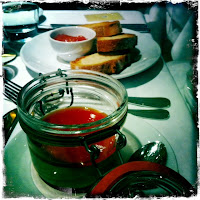 Our other shared starter was a foie gras parfait served with blood orange and rhubarb relish and sourdough toast. Sourdough bread is everywhere at the moment. From those Fabulous Baker Brothers to, seemingly, every restaurant in London it has become ubiquitous. I’m so over it and so are my teeth, too crispy and rough for me. Foie gras parfait is usually the entrée that I would always naturally gravitate towards and this one was nice. “Nice” is one of those words that can mean so many things though isn’t it? “Nice” on this occasion means “so/so” tasted good but didn’t blow my mind. The texture was extremely smooth and glossy but for me there was a slight bitter flavour to the parfait itself (and not just the jelly or chutney). This was a shame as it made the dish that I had thought would sparkle into one of the only mild disappointments of the evening.

The “near miss” dish that came close to being ordered was a ravioli of oxtail with caramelised onions which I would very much have liked to sample.

We accompanied the starters with a carafe of Anton Braun Gruner Veltliner and a glass of Sauternes respectively. Both were reasonably priced and the Veltliner in particular, a pleasant surprise. 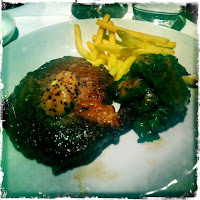 My main was a steak with smoked red wine butter and. What appears (particularly from the photo) to be nothing out of the ordinary, was a complete revelation. The pink speckled blobs on the steak looked a bit curious at first but tasted absolutely divine. Butter is infused with pellets of reduced red wine and frozen before being smoked over oak chips in W8’s kitchens. It was the most intense blast of smoky sweetness that I have ever tasted in a dish and now I have a sneaking suspicion that no sauce or butter on a steak can ever compare.

Chips were a huuuuge portion (less than a quarter are in the picture!)and served as French fries on the side. H likened them to “Burger King fries at their best” which is apparently a compliment so let’s go with it. 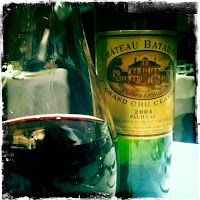 In an extravagant mood we went all out on the red wine and ordered a 2004 Chateau Batailley grand cru Pauillac. There is a reason why wines such as this cost the extra arm and a leg but it is so worth it on occasion. Gloriously smooth and velvety and packing a big fat red berry punch, its a Bordeaux that all too easily slips down the throat. The problem with drinking this sort of thing is it leaves me wanting more and preferably as soon as possible. Bordeaux is an expensive habit to get into! 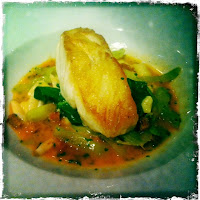 H ordered cod fillet with smoked gnocchi, razor clams and chorizo. Although the cod was beautifully executed, the runaway highlight was the smoked gnocchi. Little fluffy parcels of smokiness that melted on the tongue. Razor clams added taste and texture and the sauce was essentially chorizo based providing rich flavour. 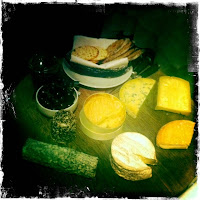 Kitchen W8 offer a comparatively limited but excellent quality cheeseboard. I hadn’t intended on an extra course but with a third of a bottle of Batailley left to polish off it seemed rude not to.  Epoisses, Comte, Cropwell Bishop Stilton and Reblochon were duly added to the calorie count. 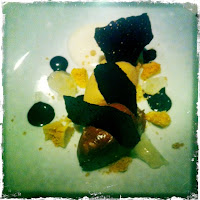 Dessert of bitter dark chocolate mousse with salted caramel ice cream (that salted caramel yet again!)hit the spot. The black wafer thingies were a bit bitter but the ice cream was delightful, smooth and sweet with a salty bite.  The mousse was delicious but if being hyper critical I would say it wasn’t particularly dark or bitter but cocoa heavy enough to sate my palate. Blobs of thyme jelly added a really interesting addition to the dish and lightened the heaviness slightly. 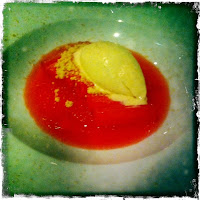 Yorkshire rhubarb jelly and vanilla custard was nice but would never be my first choice of dessert (when there’s chocolate on offer – are you mad?!) but H enjoyed it and with the custard it did remind me of the rhubarb and custard boiled sweets in jars in the newsagents as a child.

I completely understand and agree with the importance of using seasonal produce however one of the risks of doing this can be that your menu appears a little repetitive. Rhubarb featured heavily and was an ingredient in a dish option for every course as did blood orange. NB if the ingredient in question is truffle then I have absolutely no problem with repeated use, breakfast lunch and dinner, suits me fine.

I found that the thing that made each of the dishes that I ordered truly sing was the unexpected ingredient that popped out at you, with the steak it was the smoked butter and in the chocolate mousse it was the thyme jelly both of which had an intensity of flavour that really surprised me.

Would I go again? Definitely. One of the best meals that I have had in a very long time. Does it deserve its Michelin star? Undoubtedly in my opinion. Service is excellent and attentive without being overbearing, any fiddly questions that I had about ingredients were either answered knowledgeably or answers sought from the kitchen. I really cannot wait to return

Ok, so that’s two borderline sycophantic posts in less than a fortnight, I’m going to have to go somewhere rubbish just to have something to sharpen my claws on at this rate….