Despite being located in the heart of Covent Garden’s Theatreland, Joe Allens is not somewhere that you are going to happen upon accidentally. Marked from the exterior by only a small understated sign and New York style door umbrella you wonder what you are descending into as you walk down the rather gloomy stairs towards the inner door. JA is the sister restaurant of the same named New York restaurant and is something of a blueprint of the American outpost. I`m reliably informed that when the London outpost opened in the 1970s a New York Style bar and restaurant was a novel addition to London, alas that is no longer the case and, in terms of decor、JA looks tired.

Posters from theatre shows of eons past plaster the walls and many of the restaurants patrons are likely to have trodden the boards in years gone by. Over the last decade I don’t think that I have ever been in Joe Allens and NOT seen someone that I recognise from the television or stage. That said it is far from being a pretentious, starry s’leb type of venue.

Many other reviews of Joe Allens don’t view the food terribly favourably. Weirdly, considering this is a food blog and I’m a ridiculously fussy about good food, I tend to agree. If you are all about the food experience and want novel, inventive dishes cooked well at a good price then turn around and walk away as this is not for you.  If you want an atmospheric post-theatre fill you up with good company and good wine then stay right where you are. I’d like to be able to report a more diverse selection of dishes from my most recent foray into the Joe Allens menu but alas I cannot because why would you order anything else when you can eat one of their burgers? A, E and I (missing only ‘O’ and’U’) all ordered variations on a theme of burger, cooked medium or done through with either cheese, bacon, none or both. My burger was pretty rare, thick and juicy and of a level of greasiness where it is safest to keep a napkin fairly close to hand throughout. Served with raw red onion rings, plenty of gherkin and a sweet sweet bun, for me its how a burger should be, bun, for me its how a burger should be. 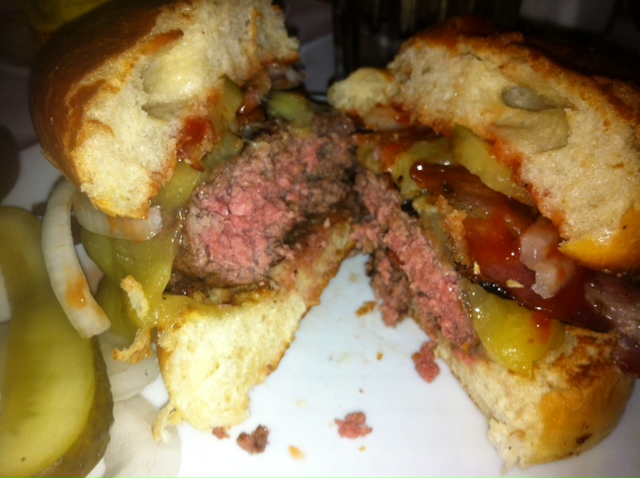 Looking around it is clear that the “secret, off menu burger” at Joe Allens is definitely not secret (in fact they now seem to mention it on their website whilst still referring to it as “secret” hmmmmm). I reckon that around 40% of the orders on tables surrounding mine involved burger.

I’m not a big fan of the super crunchy fries that seem to attract adulation at the moment in cyberspace so the salty skin on fries with a big pot of mayonnaise worked well for me.

It would be a crime to write any post on Joe Allens without mentioning the legend that is Jimmy the pianist. His knowledge of the London theatre scene is virtually unrivalled and he loves any morsel of theatre gossip that you may have. Having now tinkled the ivories at Joe Allen’s for several decades he counts many friends amongst the restaurant’s clientele and his playing is often punctuated by long pauses to chat to any passing actor or actress. Bearing a twinkle in his eye and a viciously sharp sense of humour, no visit would be complete without him.

To sum up, its no gastronomic paradise, but JA delivers exactly what you sometimes need. A late night greasy burger, some good drinks, a friendly face and a tinkling piano in the corner. To utterly misquote the film line that never was; “play it again Jimmy” and whilst you keep on playing I will keep coming.