Its no secret that Japan is now the most Michelin starred country in the world outstripping the French by some margin. Although Michelin have managed to gain entry through the secretive doors of many of these eateries the fact remains that for non Japanese speakers access to many remains nigh on impossible. Perhaps we hadn’t really researched Osaka enough compared to other cities but this is how it felt to us, either you stick to the main neon thrust of Dotonbori or doors remain rather closed.

In order not to completely break the bank we therefore opted to save our Michelin starred restaurant outings for Kyoto and Tokyo a decision which, whilst I am sure is doing other cities such as Osaka and Hiroshima a culinary disservice, seemed wise if we were to even remotely avoid the wrath of the bank manager. We therefore chose to use other cities to explore the panopoly of types of Japanese dish and styles of cuisine on offer. 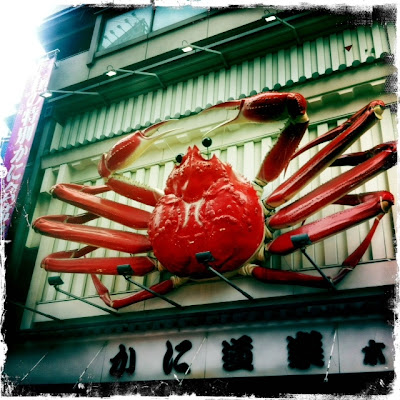 Every guidebook will tell you to go to the Snow Crab restaurant on Dotonbori in Osaka. How do you know which restaurant it is? Easy! There’s a massive great crab attached to the outside. I love crab, especially the inordinately sweet meat of giant snow crab legs and it was something we hadn’t eaten so far so we thought we’d give it a go. Like many tourist friendly locations in Japan the window of the restaurant had plastic reincarnations of the foods contained in the dish which were pretty much essential if you wanted to know what you would be eating. We homed in on a fixed price deal with a range of crab dishes included and went on in. We sat down in an almost empty but pretty restaurant overlooking the river and were handed menus. Completely different menus to the ones displayed outside. Menus that were VERY different in both price and content so we walked straight out again.  This was the only time that we felt ripped off or treated like idiot tourists in Japan so I’m happy to say that this kind of incident was very much in the minority. The same company has a restaurant in Shinjuku, Tokyo also and is renowned so perhaps this was a one off.

By this time tummies were rumbling and I might have been becoming a little hangry so the race was on to find food and fast.. We selected what turned out to be a Korean style barbecue also located on the main Dotonburi stretch. Dark as can be inside and boiling hot, it crossed my mind we had wandered inadvertently into the depths of hell but we left wondering how we had lived without Korean barbecue.

Our neighbours were Osaka locals and after thinly veiled amusement at our puzzled faces explained how the menu and cooking process worked and were particularly helpful when the flames got a bit too high endangering eyebrows (solution:sling ice cubes on quick).  We ordered various plates of different cuts of beef, pork loin, streaky bacon and even some vegetables. Its hot, its messy and you will leave reeking of charcoal smoke and cooking fat but its utterly delicious.

Our entire three week itinerary had been carefully designed around a major sumo championship in Osaka. I’d always assumed that sumo would be a regular occurrence throughout Japan however this is not the case. There are only six major tournaments each year. Although the day starts at 8.30am we had been advised not to arrive before lunchtime which turned out to be a very good tip as the locals didn’t show up until at least 3pm. As we entered the building we were given the foreigner’s basic guide to sumo and its rules which was invaluable as frankly it would have just been a  bunch of fat blokes staggering around otherwise.

I shan’t pretend to remember the intricacies of Sumo rules and tradition other than to say that if you’re ever in Japan it’s a sight worth seeing and a good day out. It is highly tactical and involves a lot of mind play trying to psych out your opposition. What also became clear was that it wasn’t necessarily the biggest sumo that won, on occasion a much smaller man would come up to compete against some monolith of a man and win. The most expensive tickets are the ones down by the matting, with only cushions to sit or recline on.

I had been hoping to find some interesting street food offerings inside the Sumo stadium but had to make do with some prawn crisps and a can of chilled Asahi, such is life!

The last fight of the day was clearly eagerly anticipated by all as the noise as the sumos approached the mat was thunderous. After much posturing and thigh slapping battle commenced. A couple of short minutes later and the champion had been vanquished, ousted from the ring by his underdog opponent. Padded seating mats from around the stadium were thrown up in the air like hats on graduation day leading to chaos. In true Japanese style though, order was quickly resumed as the audience were marshalled outside into the pouring rain bang on 6pm (got to love Japanese punctuality). 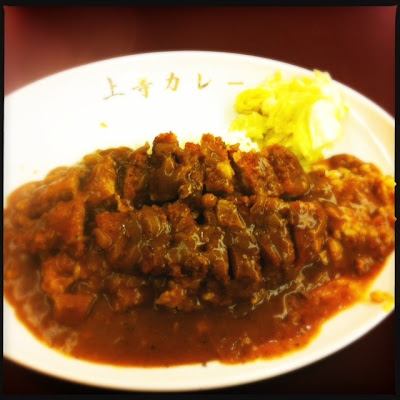 We took shelter in what quickly became the best katsu curry restaurant of the entire trip located right opposite the stadium. This was also my first experience of meal ticket vending machines where you have to pay at a ticket machine reminiscent of a car park machine in the UK and a meal ticket is dispensed which you hand to the chef. No money changes hands making the whole process very streamlined. This truly is fast food Japanese style.  I love katsu. I am now well aware that admitting this is the Japanese equivalent of confirming out loud that you’re a big fan of Kentucky Fried Chicken but that is the way it is. The gentle curry sauce is unlike anything you will find elsewhere. It has no recognisable spices in it and is, effectively, brown gloop. But combine it with succulent pork escalope, dipped in panko breadcrumbs and flash fried before being placed on a bed of fluffy rice and you have Japanese fast food heaven.