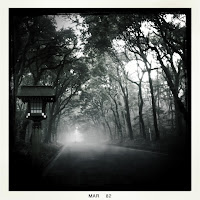 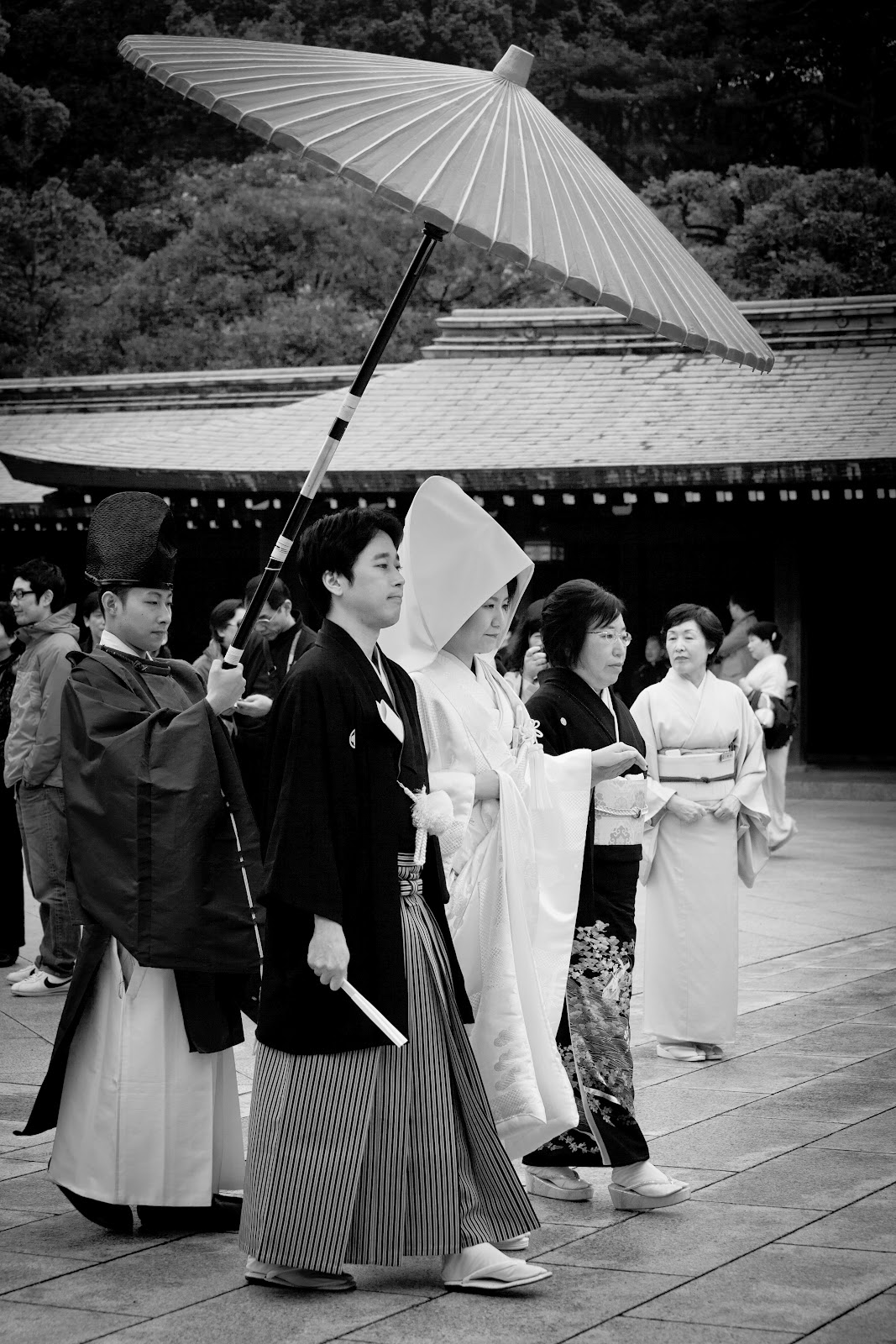 The morning of my first full day in Tokyo dawned early, very early. Jet lag struck and had me going stir crazy in the hotel by 6 am.  After a wander from Shinjuku down through the eerily misty Yoyogi Park we found the Meiji Shrine, still almost deserted at such an early hour save for the guests at a beautiful but somber and silent Shinto wedding procession in progress.


Carrying on through the back streets  with an increasingly rumbling tummy we stopped at the Ukiyo-e Ota Memorial Museum of Art, which specialises in Japanese art and had a great selection of Hiroshige pictures, before hitting the culture clash of Harajuku in earnest. Popular with teenagers of every which fashion persuasion from Goths to Anime cartoon characters and school girls (and boys!) to wannabe Lady Gagas, the shops reflect the zeitgeist. Graffiti and t-shirt slogans scream out a weird combination of Japanese and English words. Boutiques offer dog handbags and rock t-shirts (£80 for a gem encrusted Led Zeppelin Chihuahua t-shirt?). Basically if you can imagine it (and even if you can’t) you will probably find it somewhere in Harajuku. Leaving the back streets to join the buzz of the main Omatesando we were stopped by a Japanese man wearing a green furry hat and jigging around to Irish music emanating from a tinny ghetto blaster perched under a sagging gazebo to avoid the drizzle. He wanted to know a) were we Irish and b) would we be attending the “Grand Patrick’s Parade” at 2pm. At this point I’m ashamed to say that I was humouring him when I promised to be back and nodded at his assurances it would be “big, exciting event, lots of people” but was game for a laugh.

At noon the hunger pangs of having skipped breakfast grew too strong to ignore and being still a little nervous of some of the weirder looking establishments and menus we leapt through the doors of a sushi restaurant on Omatesando to be greeted by our first “irasshaimase” chorus from the chefs. A lunch of sushi, served conveyor belt style from which YoSushi found its inspiration, awaited. The conveyor belts aren’t actually as common in Japan as you might imagine so it later on trip I was glad we had hit upon one on the first full day. 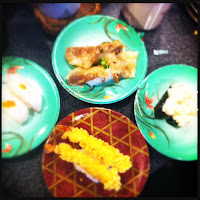 Ok, so it’s not gourmet fine dining and more closely ressembles Yo Sushi than Nobu but it was just really nice, honest to god, sushi. So nice in fact that we went back again on our last day. We had to try all the obvious stuff like salmon nigiri etc but also took the opportunity to compare different grades of tuna from the cheapest stuff through to the “toro” fatty tuna. Sounding like a complete philistine for a moment, I admit I didn’t really “get” any difference in taste but texture was the main differentiator, the ‘fatty’ stuff really does make your teeth feel greasy! My favourite plate was a prawn nigiri topped with akin of lightly grilled smoked mayonnaise plus spring onions and roe. So delicious I order 4 portions on each visit.  Ebi Katsu was the only disappointment of the meal as it was a bit soggy despite the prawns inside being a bit dried out and rubbery. I think the rule is, when in a sushi restaurant, stick to the sushi! 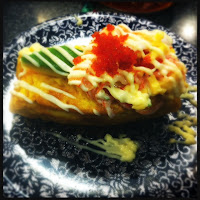 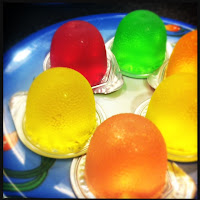 I hadn’t realised until I was reading up on Japanese food before the trip that a great deal of sushi prevalent on menus in the UK isn’t indigenous to Japan (can a food be indigenous or only the animal its made of?!) That said California rolls are now pretty common having been taken to heart by Japanese people who were ordering them in English segued into a stream of Japanese.  In a frivolous holiday mood I ill advisedly opted for a “dessert” of jellies sealed into little space age pods. I’m not sure how to describe them other as rather synthetic tasting (along the lines of what pineapple might taste like if you explained it to a martian who then tried to recreate it in a lab) but they were fun and inexpensive so no harm done. Needless to say they weren’t repeated on our return visit. 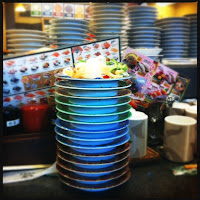 Appetites temporarily sated we were fanfared back out onto the street by a chorus of  happy cries of thanks and farewell from the sushi chefs, and found our vantage point on the parade route, still slightly sceptical. Sceptical that is, until we met Henry the dog and his owner. Henry was one of an unfeasibly large army of Tokyo based Irish setters and wolfhounds due to lead the parade who had all been dressed by their owners in full on stereotypical “Irish” regalia. I’m talking a doggie fashion parade of leprechauns, kilts and emerald tutus. Some dogs chasing their own tails to bite off ribbon adornments, others going into a frenzy in an endeavour to shake off ridiculous hats and some, well, some just trying to hump the one in front. Canine carnage. 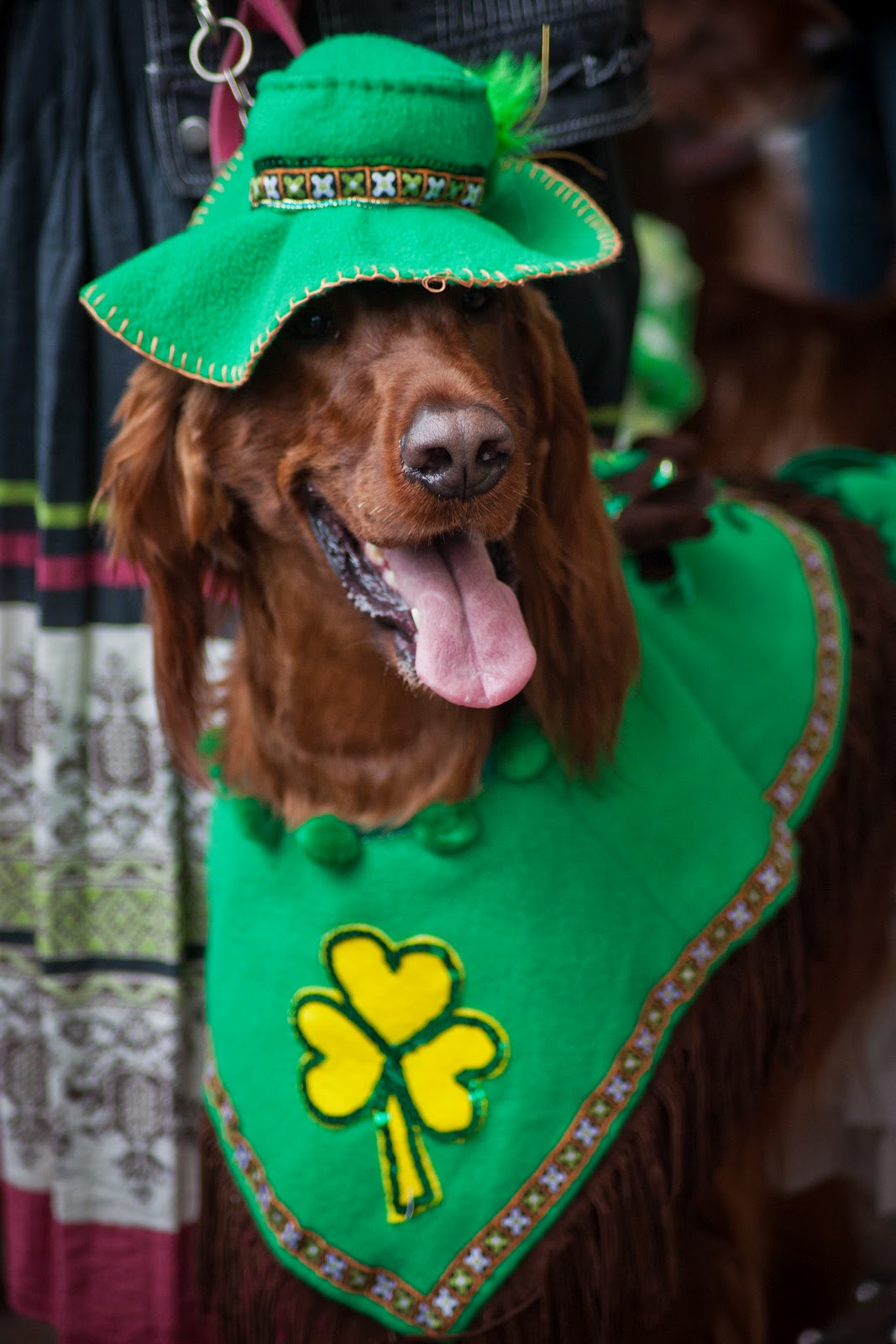 What followed will stay with me until my dying day. If someone had told me that they had spiked my lunchtime sushi with LSD then, frankly, I would have believed them.  When the Japanese do something its not half hearted, if a job needs doing then it needs doing properly. I’m absolutely confident that not even Dublin can boast a St Patricks Day parade like the one in Tokyo. Surreal and, in all honesty, occasionally downright inappropriate, it was amazing.

Our new friend Henry led the parade accompanied by all his dressed up canine mates. A man in an emerald green cloak seemingly depicting an indeterminate Pope complete with cotton wool beard and mitre hat followed on, a group of samurais waved swords in a rather precarious fashion (nope, I’m stumped as to what they have to do with Ireland either) and a group of clearly inebriated teenagers whose only link to the Emerald Isle was a banner depicting their love for U2 shuffled by. This went on for over 20 minutes with what must have been in excess of 1000 people joining the parade.   From the two sets of cheerleaders to the many Irish Bars represented, to the dancing Guinness pints to the Irish Tin Whistle Society of Japan (who were really rather good), I have never cried so much laughing and loved the enthusiasm with which they were celebrating the patron saint of a country nearly 6000 miles away that the majority had most likely never visited.


The first day couldn’t have been more of an extreme of contrasts but I loved every second. Japan you’re amazing.