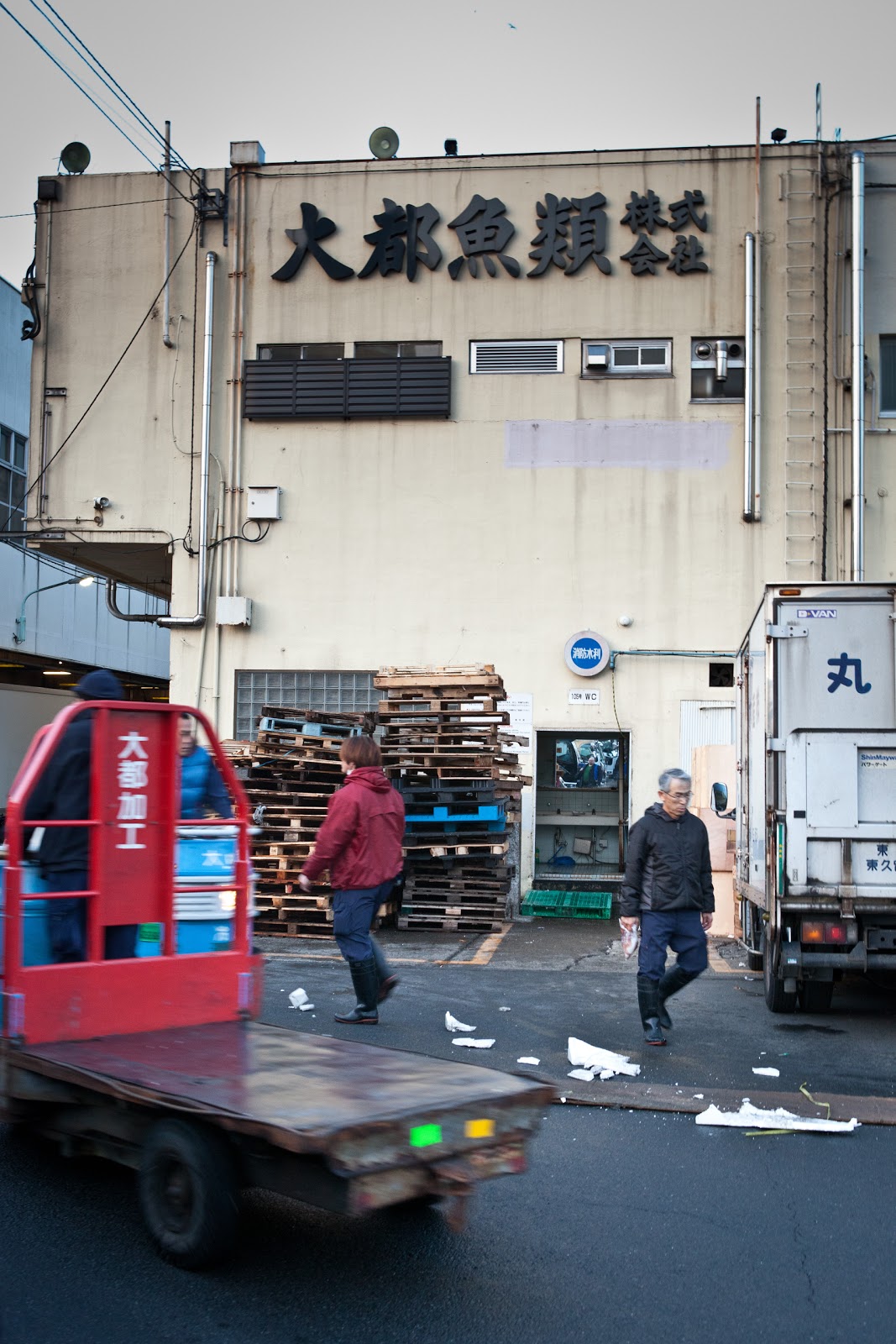 Tsukiji Fish Market is listed in the guidebooks as one of the “must sees” in Tokyo and is reputed to be the largest fish market in the world selling in excess of 2000 tonnes of fish and seafood each day. Having been affected by the March 2011 earthquake the market had closed down to tourists for a period of time however online founts of knowledge seemed to think it was open again but on a more limited scale; only 120 people per day.

I don’t ‘do’ queuing. I rarely go anywhere that requires lining up and just waiting. There usually have to be significant quantities of free alcohol or very reduced handbags to get me standing nose to tail with other people. This is why I hate the current London trend for no reservations in restaurants, it just makes me feel as though the owners are making a mockery of their customers. Sometimes, however, there are things that you know you are only going to get one shot at, things that come around once in most people’s lifetimes.  This is how and why I found myself getting out of bed at 4am to drag my bleary eyed corpse into a taxi to get down to Tsukiji for 4.30am. Although the market itself opens at 3am with auctions beginning at around 5am tours don’t begin until around 6am. The queue for tours allegedly opened at 5am so 4.30am seemed ‘reasonable’ in the circumstances. The queue already snaked around the outside of the market building and we were marshalled into line by an understandably grumpy old man.

It turned out that we had scraped in by the skin of our teeth as everyone arriving after us was turned away. ‘Too late’ by 4.40am. If you do make it into the queue you will have a long, cold wait ahead of you until doors open at 6. You really do need to be committed to seeing fish get sold! 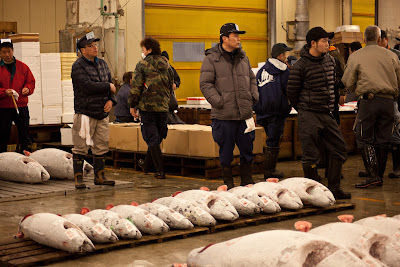 After an hour’s wait out on the street we were issued with hi vis tabards of the sort I used to wear playing netball as a teen, not a good look over layers of jumpers and coats… After all this hassle you might begin to question why anyone would be this excited about a fish. I certainly did but when you read some of the statistics online about the market you begin to realise how important it is to the fish industry globally. Over 30,000 people are employed within the market. I had always assumed – quite wrongly as it turned out- that the fish coming through Tsukiji would have been Japanese caught. It is more than likely that fish have been shipped in from as far afield as Australia, Spain, the US or Scandinavia.

How ironic that a fish caught by trawlers sailing out of New England’s major ports can make its way to Tsukiji for auction before being shipped back to the top sushi restaurants of New York or LA.  A sort of post-mortem migration. 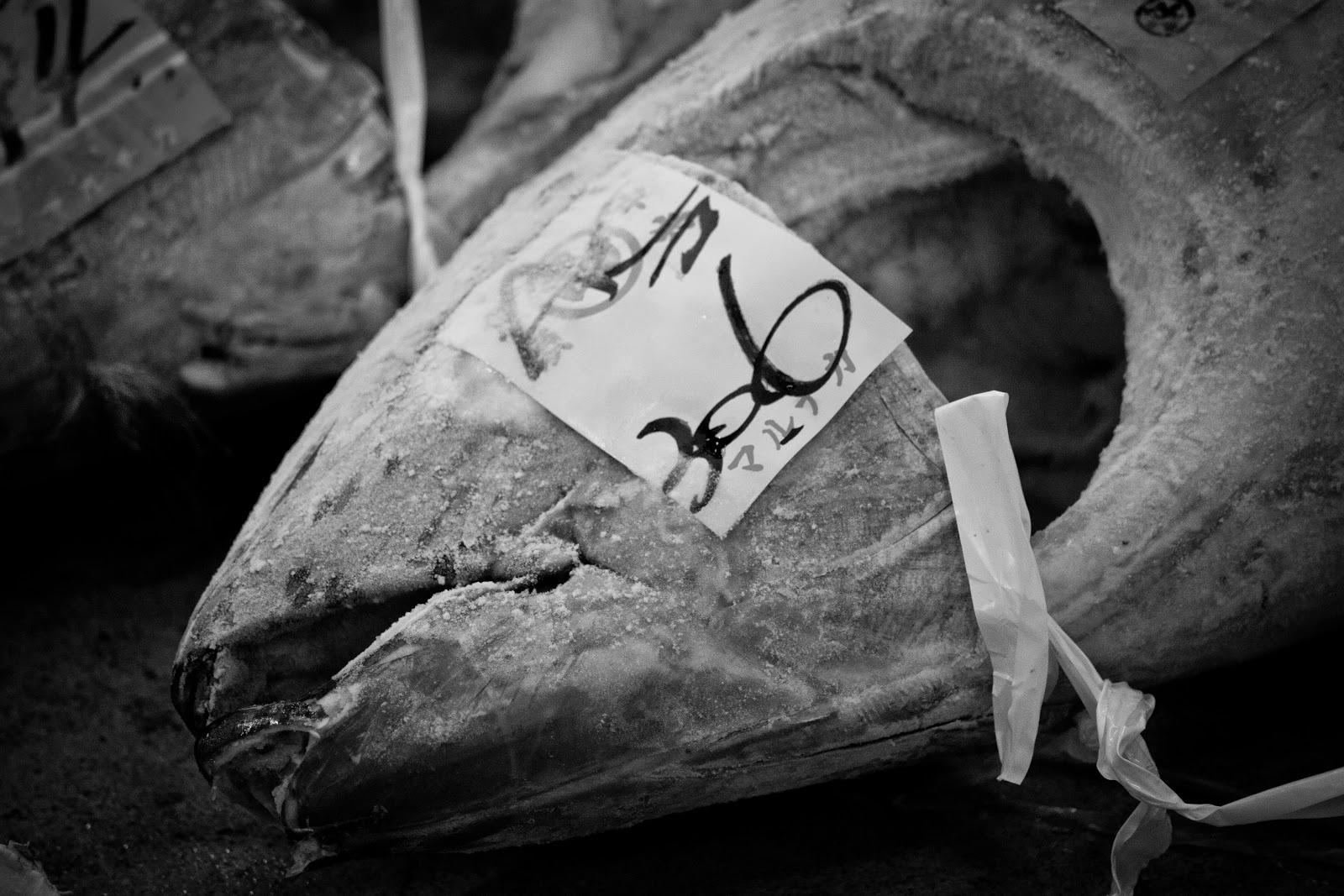 The only auction accessible to the public is the one for frozen tuna. Frozen tuna tends to have a more reliable price range as it is harder to buyers to assess the quality so they are no so prepared to take a gamble on the price of what they are bidding for. That said, it is not to say that fresh tuna is “better” than frozen, many of the frozen fish have been frozen immediately from the sea in blast freezers which some argue captures the ultimate freshness of the fish. Others argue that tuna can improve with age both in flavour and texture although to me this may be a justification for the length of time it takes to ship fish from four corners of the planet  to Japan then back out again.  I like my beef well hung but maybe not so much my tuna. 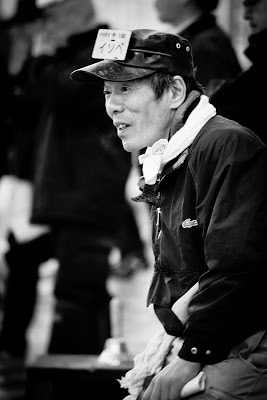 In the run up to the auction buyers with numbered plaques tucked into their caps wander round with a torch and sticks poking at the frozen tuna lined up on the ground. Considering the combined value of the fish- it is not infrequent for single fish to sell for tens of thousands of pounds-  it seems strange to see them lying around on the floor being prodded at.  Small slices are cut into each fish so that the buyers can shine their torches through the meat and also through the fins to assess the quality of the meat. Apparently a two second glance at a thin slice of meat can give a practised tuna buyer a good understanding of how oily the fish is, whether it was healthy when alive and how old it is in just the same way that an oenophile might examine a glass of Bordeaux.


Most recently one bluefish tuna sold for in excess of $1.75 million, crazy money for one fish. That said this sort of sum needs to be put into context in terms of what the fish can be sold on for. It is rare that one outlet will take the whole fish. it is usually bought by a fish trader from within the market who then slices it carefully and sells on parcels. An average sized blue fin tuna can make in excess of 8000 individual pieces of sushi if cut by a master carver.

The sale itself is kind of crazy. One man with a handbell like the one used by a town crier stands on a crate and an element of hush descends. Quiet before the storm….. 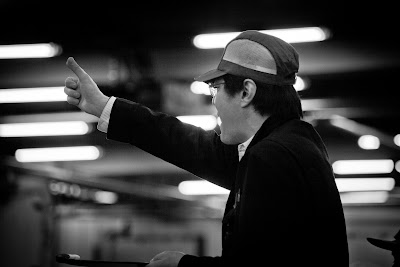 When the bell rings the auctioneer begins a tirade of shouting and gesticulating that leads you to the conclusion that war may have just been declared rather than a fish been sold. These manic arm movements and shouts continue until the last fish in the row has been sold. The whole cast of players then take a few minutes to regroup and poke at the next row of fish before the whole shebang starts over. 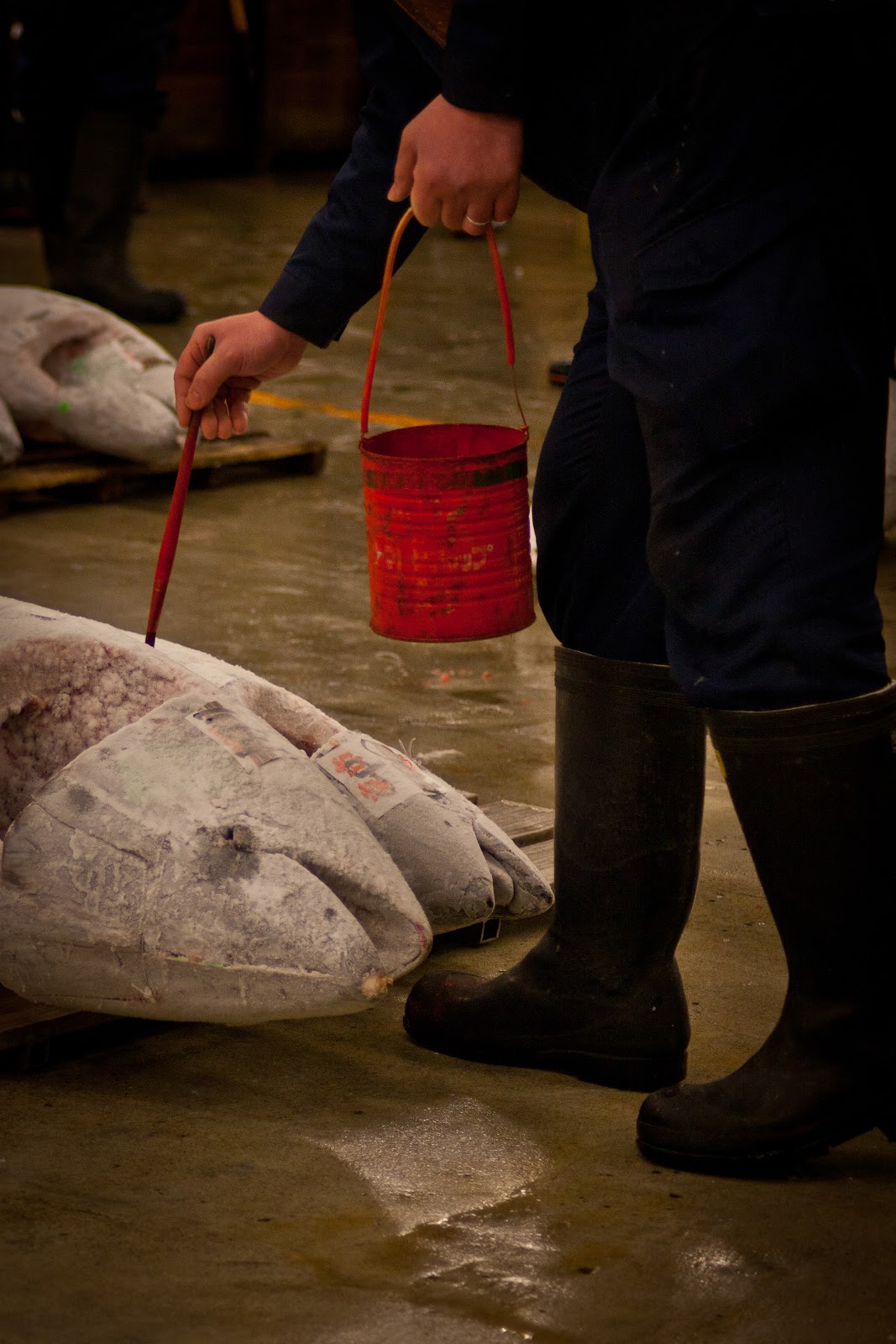 Once each fish has been sold a red mark indicating the new owner and agreed price is painted on the flesh in red.  Porters with trolleys come in and haul the frozen fish onto a trolley for the next stage in its onward journey.


It is an interesting experience to see the auction process but compared to the chilly wait it does seem over before its begun and you are ushered out into the dawning sunlight. The route through the market takes you past stalls with giant bandsaws cutting the newly purchased tuna into large chunks. Trolleys whizz past with varieties of fish that you are never likely to see on the Waitrose fish counter or, frankly, anywhere in the British Isles. Seafood of every shape, size and colour has a place and a willing palate somewhere in the market.

After the tour we wandered round the market past the small Shinto shrine where fisherman and marketmen leave their offerings seeking protection and luck from the sea. In all honesty they would be better off seeking protection from the motorised forklift trucks being driven at demented speeds by tired looking men in grubby white coats and wellington boots, cigarette inevitably hanging from the sides of their mouths.

Despite the fact that what I really wanted was a return to my bed and something hot for breakfast, it seemed churlish not to sample some of the wares whilst within the market walls. So, off to choose a sushi restaurant for breakfast. Although there are plenty of places selling food many are targeted at the market workers and don’t actually sell sushi, the best choice can be found in the fruit and vegetable area of the market at the lower Shinohashi side of the market. 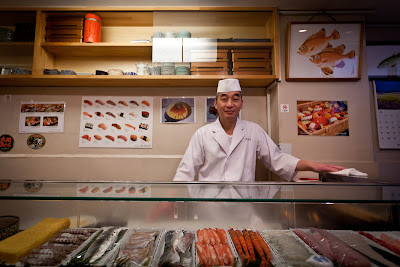 The majority of people were headed for Sushi Dai which is reputed to be the best sushi house in the market (or maybe just the most famous). Of almost paralelled renown is Daiwa in the same strip of eateries.The queue was already very long with an estimated wait time of 2 to 2.5 hours. Having already spent what felt like half the night queuing to see the fish get sold I’m afraid my British queuing gene deserted me and we opted for elsewhere. It seems to me that it would be hard for a bad sushi house to continue right alongside the sushi Kings and I’m always reassured when you see locals eating somewhere so we jumped into the first restaurant with a few seats already taken and got ordering. 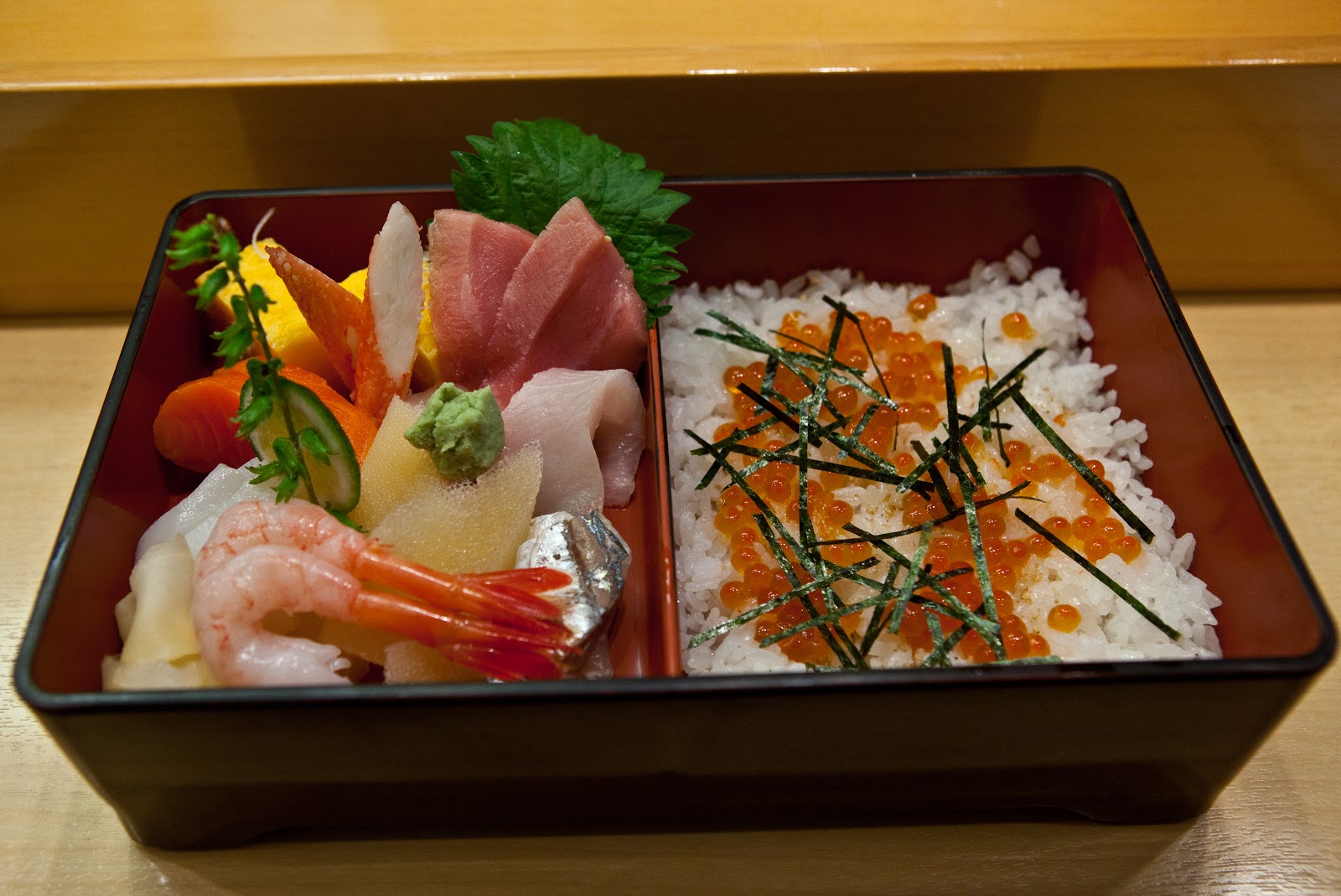 We chose a selection box of sashimi and seafood then ordered some additional tuna so that we could compare different grades of tuna side by side. Toro tuna or “fatty tuna” is quite distinctive compared to the standard grade style of tuna used in basic sushi. 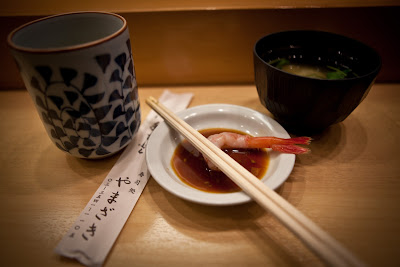 The more fatty the tuna becomes the lighter the colour of its flesh and the more marbling that you tend to see. Grades range from maguro (which is the most lean and pinky/red tuna) to chu toro,  to toro, through to oo toro which is taken from the under belly of the fish. We opted for toro.  This is where I may demonstrate that I truly am a fish philistine. Yes, there was definitely a difference in terms of colour and the texture difference was very pronounced (it is truly “fatty” leaving an oily slick on your lips and teeth). I’m afraid that whilst I’m game for trying any well, game, on the meat front unknown sea products leave me a bit squeamish so we stuck to what we knew, mackerel, salmon, bit of octopus, that kind of thing…. 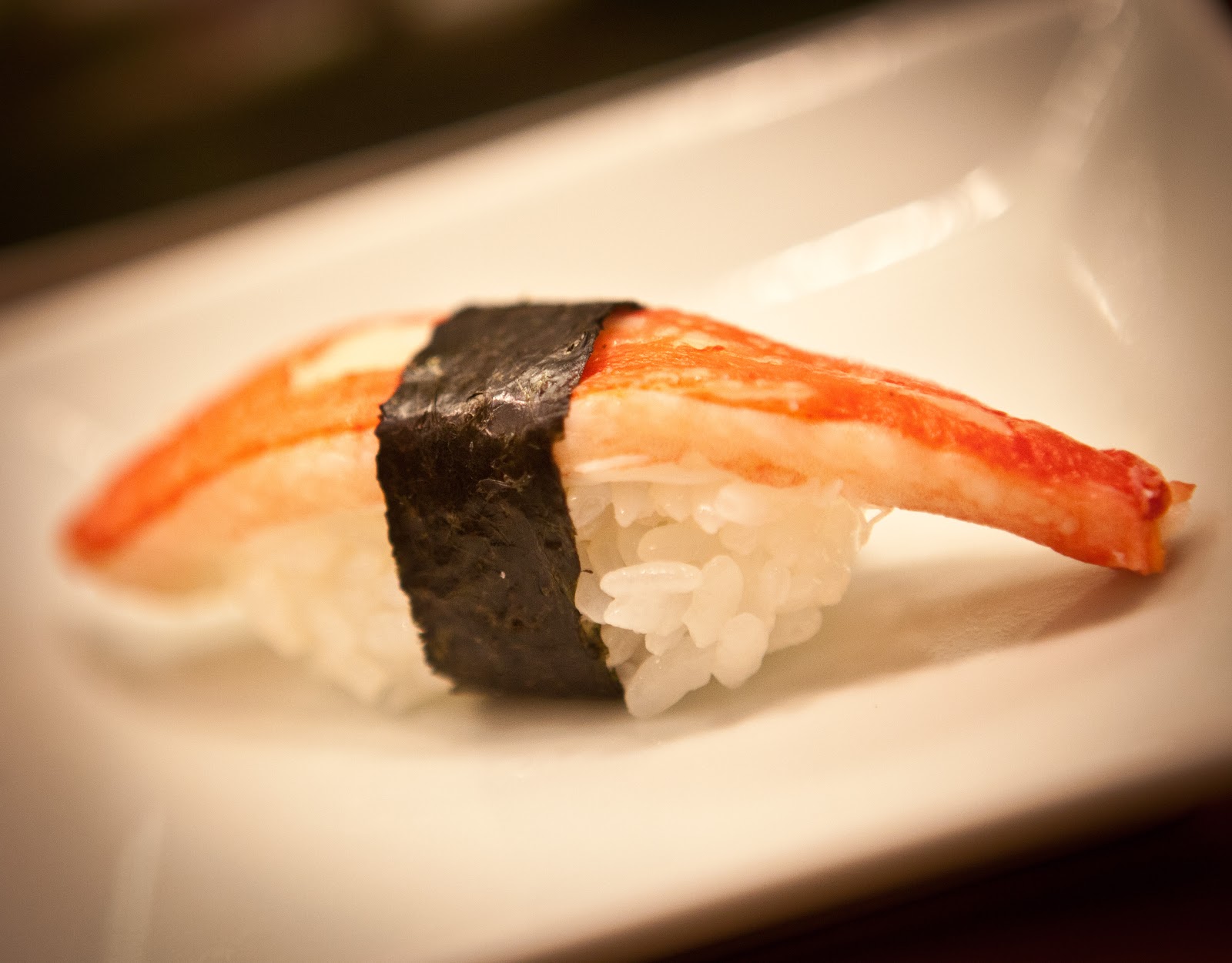 It was fantastic to try fish so icy fresh but in all honesty I can’t see myself making a habit of sushi for breakfast. They can definitely keep the weird yellow spongy stuff that seemed to be like a cross between tripe and roe.

The snow crab claws were the absolute highlight for me; beautifully sweet and fleshy. I also loved the little sweet prawns or ama-ebi that are so different to the frozen squiggly little things we get in the shops in the UK.


If you are in Tokyo it is worth the visit just because it is so different to anything else you will experience. The early morning start isn’t as hideous as I make it sound. After all, the jet lag will have you up with the fishmongers anyway….