A glorious Sunday morning dawned and following a promise I was looking forward to a saunter around London watching some maniac marathon runners do their stuff from the sidelines. Couple of drinks maybe and a pub lunch? No sireeee. This marathon runner stalking thingummyjig is almost as exhausting as the marathon itself*. Several hours later with an unhealthy dose of blisters- yes I managed to get blisters as a spectator, don’t ask- and very soggy from a torrential downpour I found myself heading back through Battersea feeling both starving hungry and just a little bit grumpy.
(*massive exaggeration alert) 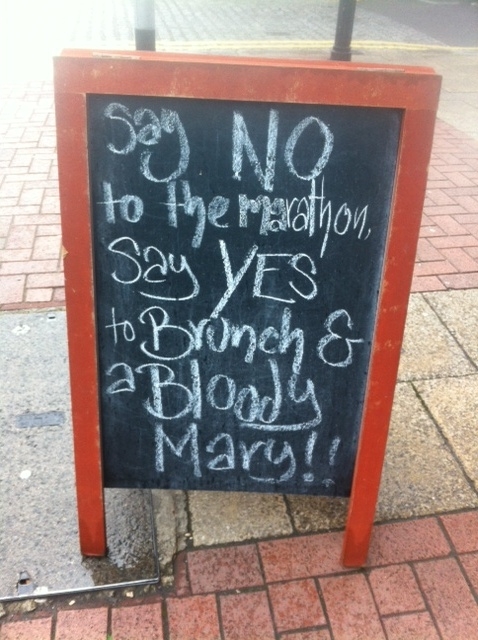 I had been tempted by the sound of Ben’s Canteen for a very long time having been mutual followers on Twitter and this seemed like a perfect opportunity to refuel. My end of marathon day sentiments seemed to be echoed by the sandwich board outside Ben’s; not a Bloody Mary maybe and a bit late for brunch but a gin and burger would have exactly the same effect.

The decor of the restaurant is quite rustic with stripped wooden floors, chunky tables and mismatching chairs. The toilets are unusual but follow quite a cool idea of letting a local artist loose in each cubicle to put their own stamp on it.

The giant wordsearch on the wall had me fixated and resulting in my blurting out random words throughout dinner much to the annoyance of A & E whose conversation was punctuated by my shouts of “gazelle”, “hippo” etc as words popped out at me.

Having been called by the sirens of the Ben’s twitter account towards the mythical and much praised Scotch egg (an all day breakfast one don’t you know!) I was devastated to discover I was too late, other devotees had guzzled them all, the selfish buggers. No matter, the absence of Scotch egg just means I will have to return (as does the absence of the rolo chocolate tart with peppermint icecream but more of that later). Straight onto the main event then…. 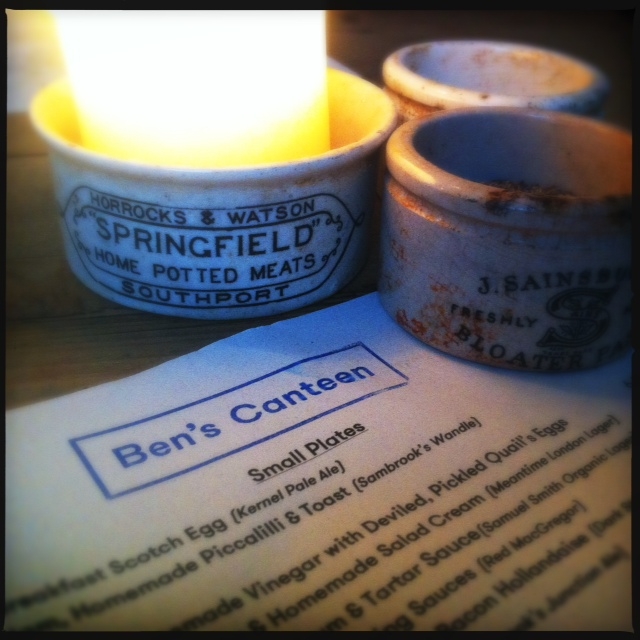 Although it was a Sunday and the roasts sounded amazing, I wanted to check out the rumour that Ben’s offer one of the Best 10 Burgers in London.

The burger sauce is really good. I’m not going to try and hazard a guess as to what goes in it other than to say that its both tangy and creamy at the same time and, whilst I’m overusing words ending in “y”, its also bloody yummy.

A&E did both order the roast and the beef, in particular, was beautiful. Note that I don’t say it looked beautiful. I know is was beautiful because E had so much beef on her plate that it was almost a whole cow so I obliged with some plate clearing assistance. Both rare and tender, call me selfish but I can’t wait to go back and have a whole plateful to myself.

Dessert was probably my only slight dip in the evening. I had been eyeing up a rolo tart with peppermint ice cream since the menu arrived however it was all gone and, despite appearing again on the newly printed evening menu (albeit this time with spearmint icecream) none was to be forthcoming. There had also been a white chocolate tart on the first menu we were given but this too had disappeared from the menu we were handed at dessert time. I wasn’t feeling terribly inspired by the remaining non chocolate desserts (including rhubarb eton mess, lemon three ways, Dark Star Cheesecake and rum jelly with coke ice cream) but really wanted a taste of something sweet so went for lemon three ways.

The three ways in question were an ice lolly, lemon curd and a lemon sponge pudding. The ice lolly was more style than substance, it looked great in the tower on the plate but tastewise lacked in flavour a little. This essentially meant that the dessert was lemon sponge pudding with lemon sauce. It was an excellent sponge, all light and fluffy and suitably sweet and zesty and the curd sauce was equally delightful

The staff are absolutely lovely and very knowledgable about the food that they are serving and dealt brilliantly with my minor childish tantrum over the rolo tart (I thought the whole point of the Rolo is that you save the last one for someone hmm? hmmm?)

The wine list is comprehensive and priced by the glass or bottle, we settled on a couple of bottles of Spanish tempranillo that slid down quite nicely and warmed us up on a chilly, wet spring evening.  If you’re in the Clapham Junction area there is really no reason not to give Ben’s a try.

UPDATE:  I have been back to Ben’s again since my original visit. Lured by the Twitter sirens once more, I saw the promise of a midweek barbecue on one of the few evenings that we have been able to call “summer” so far this year. The burger was good (although a little overdone perhaps due to an unruly barbecue) but the pulled pork roll was sublime and a total bargain at 6 pounds. I think Ben’s is increasingly likely to become a reliable neighbourhood staple for me.