Itsukishima Island is just an hour away from Hiroshima and easily accessible by train and a short ferry ride. Better known by the descriptive name of ‘Miyajima Island’ or ‘Shrine Island’, it is unlike anywhere else that I saw on my trip to Japan and was one of my favourite stopovers. It is perhaps most famous for the giant Torii gate out at sea, accessible on foot when the tide is out and appearing to float when the sea is in. At just under 12 square miles it is navigable by foot and has very little traffic.

The island gets awashed with Japanese tourists arriving on the regular passenger ferries, especially at the weekend, so if you can stay at a ryokan overnight you really get to see a different and much more peaceful side to the community once the last ferry disappears onto the horizon and the chatter melts away. 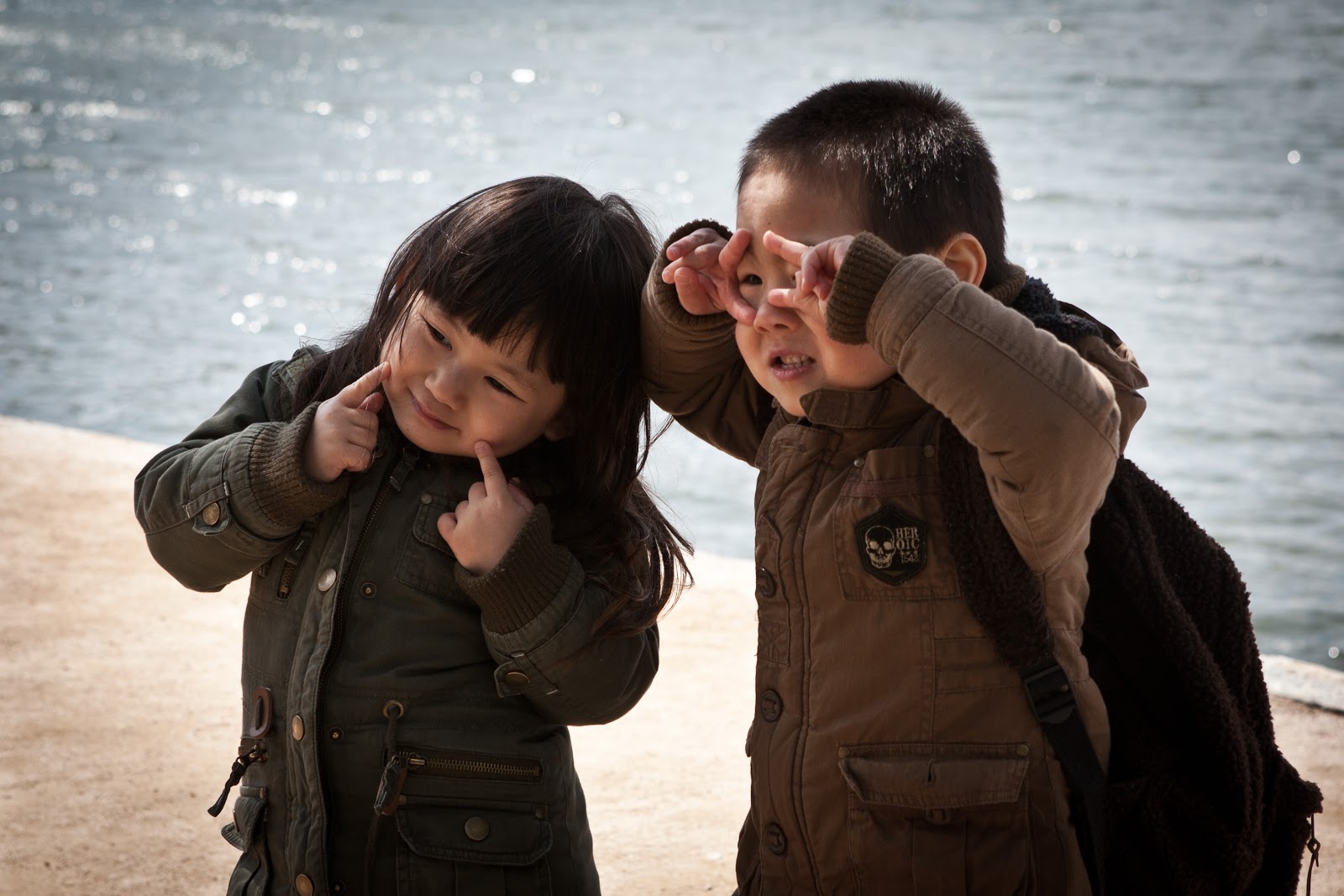 Like Nara, the island is home to lots of small, wild but very friendly Sika deer who trot up and down the streets occasionally begging for food but generally ignoring the alien invaders many of whom treat them with a great deal of respect as they are considered to be sacred under Shinto religion. 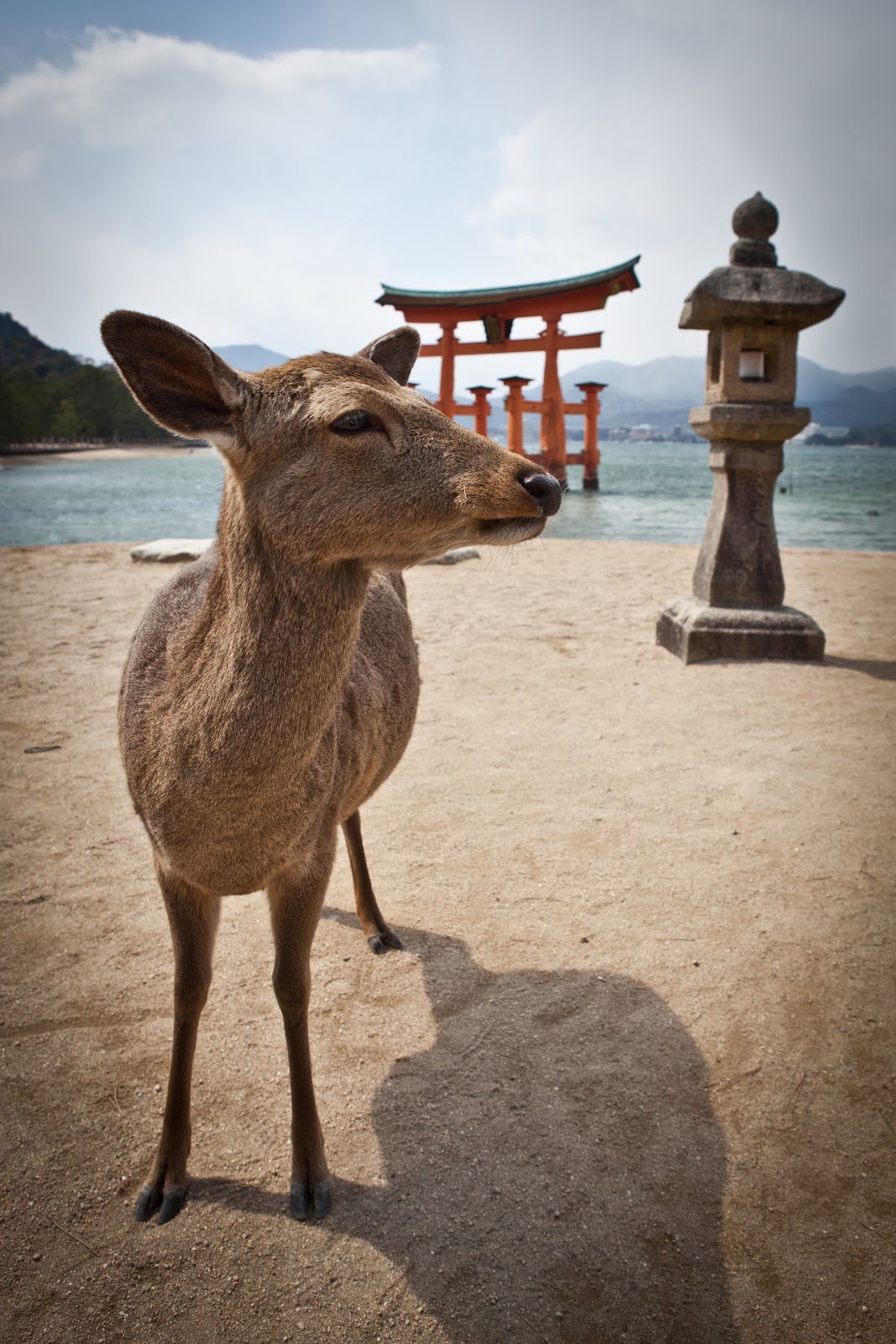 Most towns and areas of Japan have their own special, local sweet delicacy to be taken back to friends and colleagues as a token from your trip. On Miyajima this comes in the form of the Momiji manju, a maple leaf shaped cake that can either be served plain or with various fillings. We tried custard, jam, cinnamon, red bean paste, chocolate, apple and pistachio, some were better than others (hold the bean paste for me please…..) 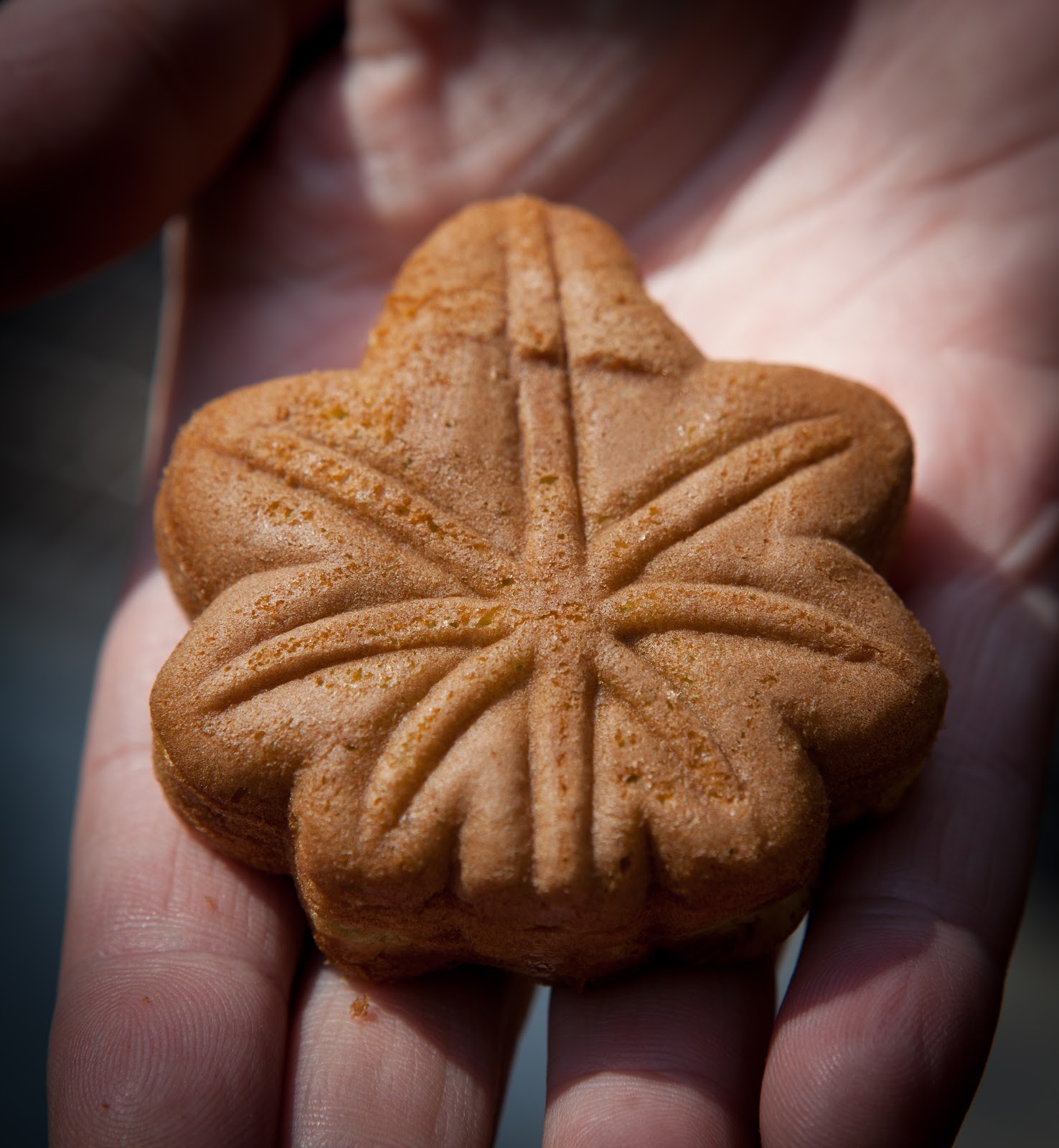 Lunch consisted of a selection of random street foods. “Meat sticks” were a lot more tasty than they sound, we devoured various shapes, colours and sizes including crab, asparagus & bacon and octopus amongst others. Nothing gourmet but they were good and filled a gap keeping us warm from the biting wind on the seafront. 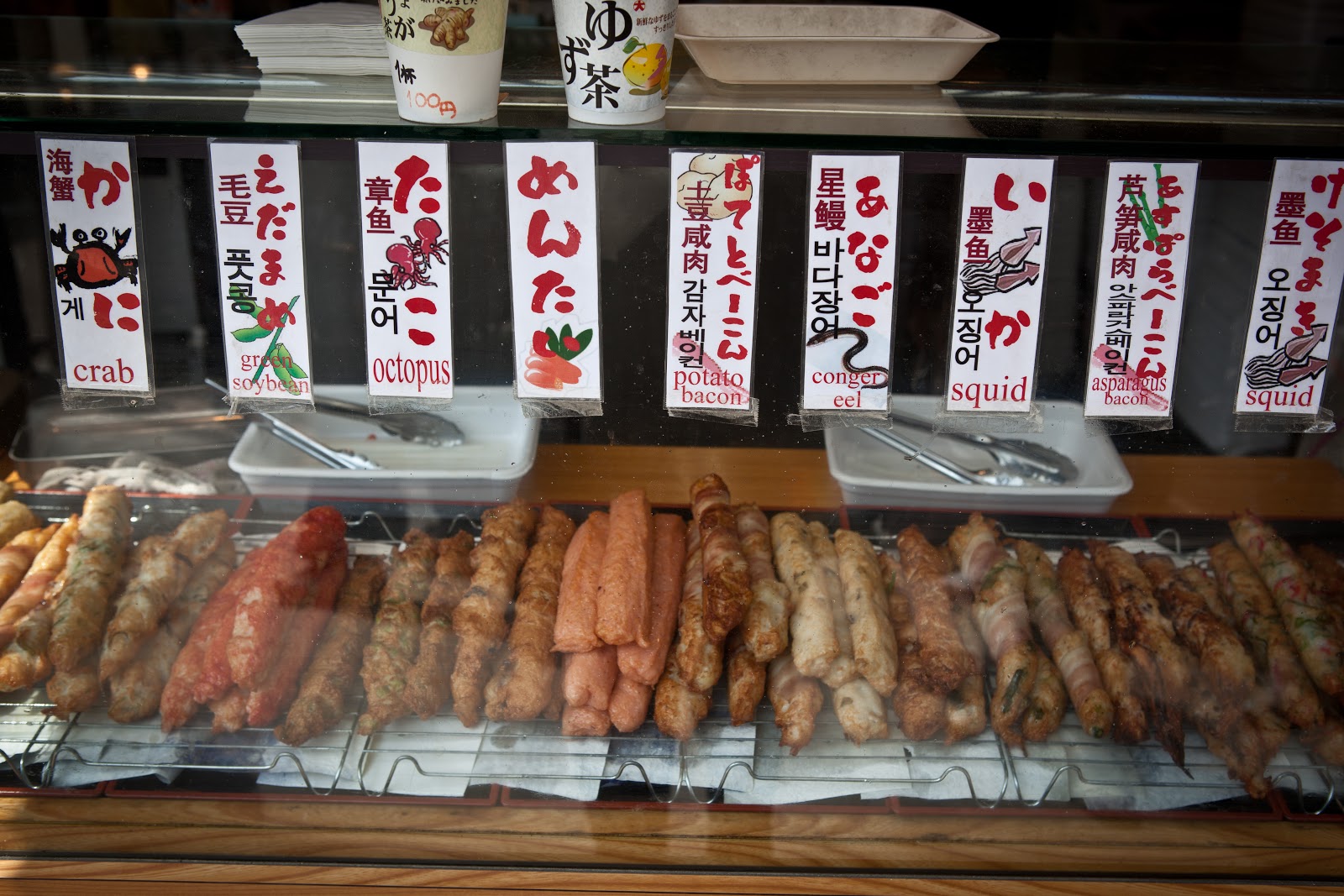 One of the other island specialities is charcoal grilled oysters with numerous vendors out on the street calling at you to attract you to their wares. I’m never going to be an oyster fan unfortunately so the sales patter fell on deaf ears. Although the island is small and easily negotiable on foot, the other option for getting about is in a manpowered rickshaw which plenty of the Japanese tourists were taking advantage of. It seemed like the epitome of laziness whilst I was walking along the flat town roads, when I got a further up the hill in the ten minute walk to the cable car I was starting to be a little envious.  Crowning over the island is Mount Misen at around 500m which may not seem enormous but is very prominent on such a tiny island. Although you can climb all the way to the top of the mountain if you’re so inclined, we caught the two staged, kilometre long cable cars up to the top and then had a bit of a wander, visiting the small temple but unfortunately didn’t see any of the wild monkeys that the signs warn you about. On a clear day you do, however get a 360 degree view out over the ocean and back to Hiroshima. 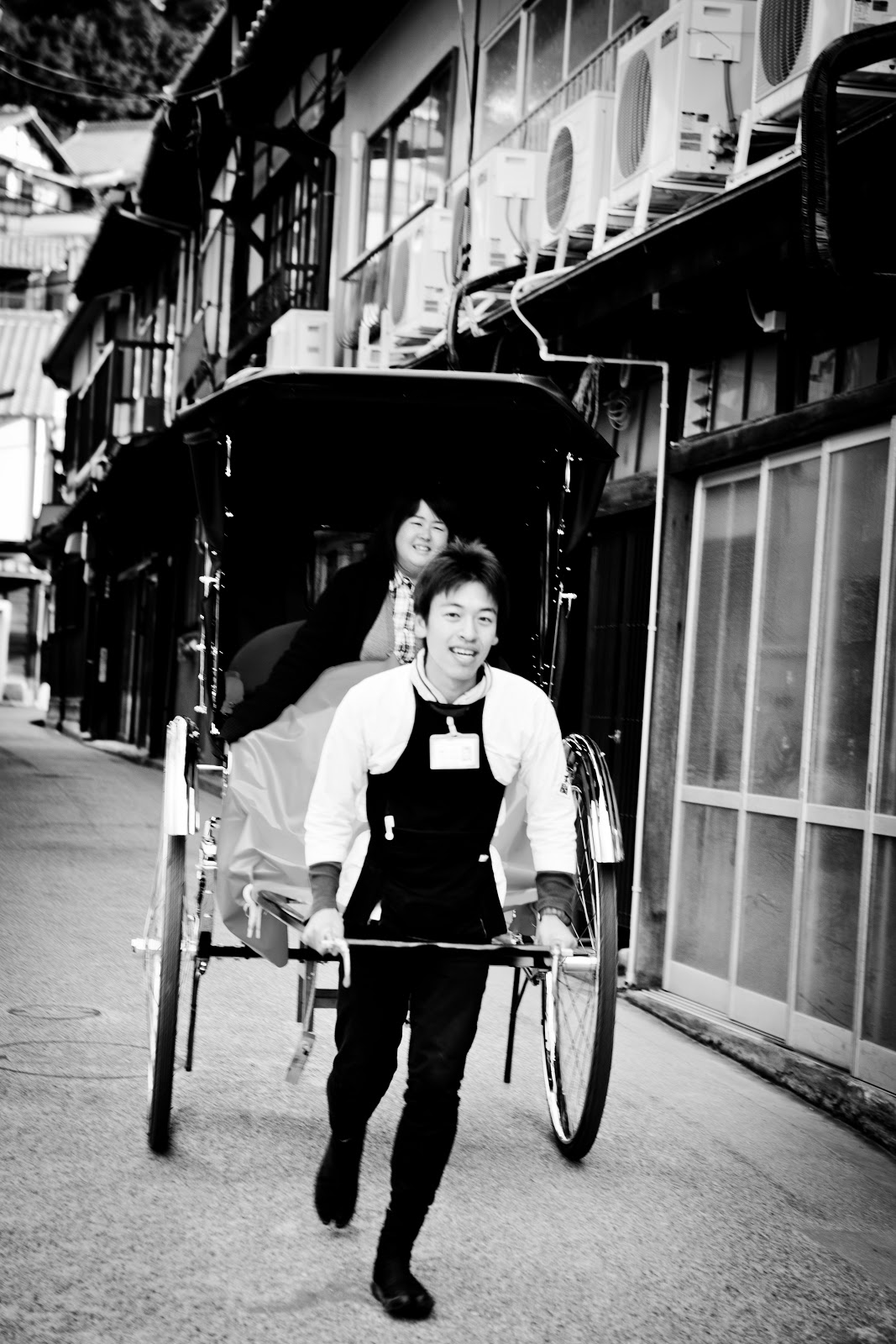 Whilst the whole island is designated as a World Heritage Site it is at the top of Misen that one of the most important sites is located. Reikado Hall is home to a cauldron that has an eternally burning flame tended by resident monks who glide serenely around the plaza outside the Hall and ensuring that The sacred flame in the cauldron was the one used to light the flame at the peace monument in Hiroshima. 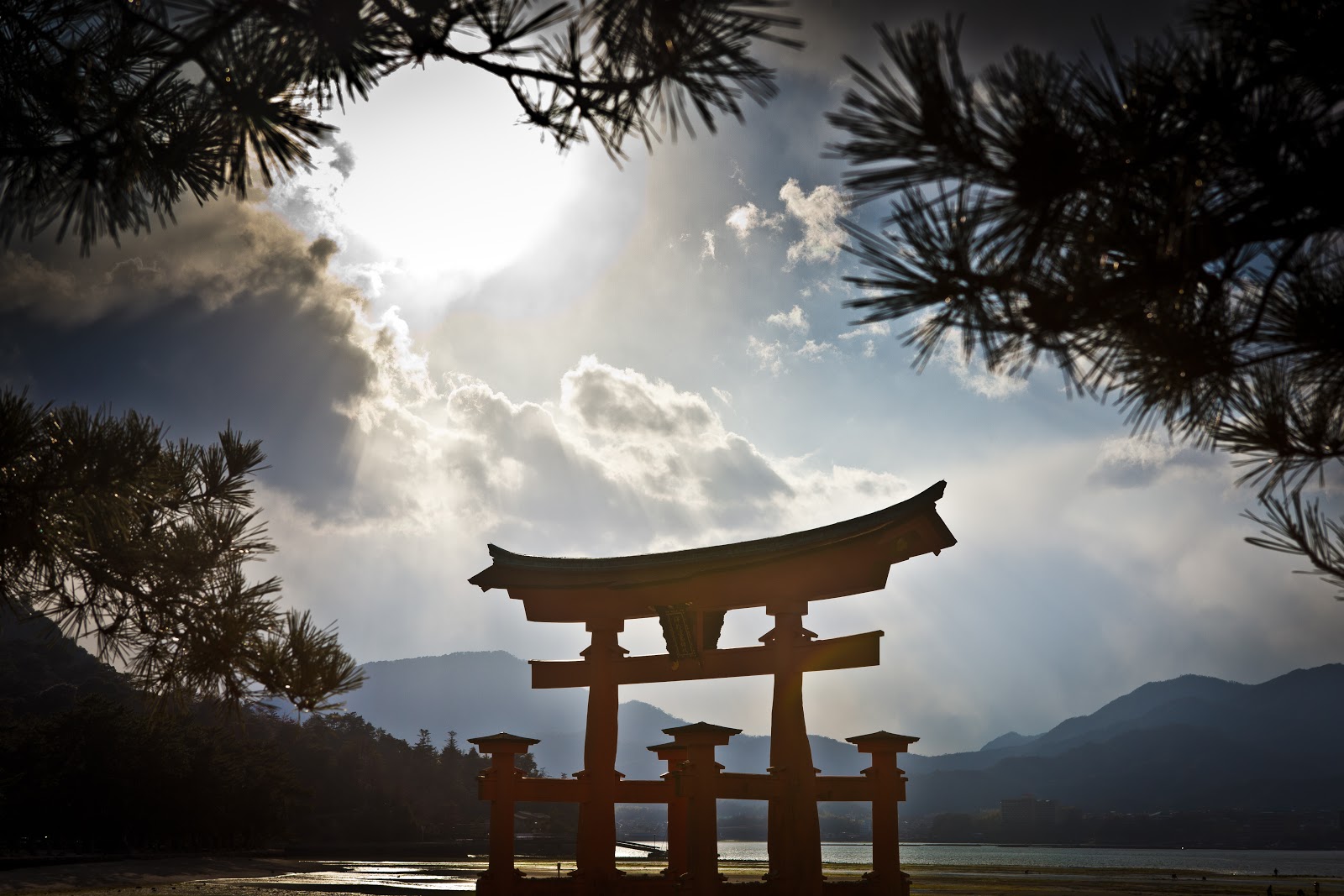 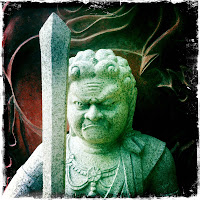 Our ryokan, Ryoso Kawaguchi,  was quite a small one set back on a street parallel to the main sea front tourist thrust. The day that we arrived we were the only non Japanese guests which meant quite an audience at dinner intrigued as to how we would react to ryokan food. Kawaguchi had two onsen bathing rooms, one with a very large onsen that would have fitted at least six to sit  (or just me wallowing about like a hippo in the steam) It really is a very relaxing way to spend the early evening floating around in gloriously warm water before retiring to your room to put on your yukata coat and slippers ready for dinner. Unlike many ryokan where dinner is served in your room at low table on the tatami mat, dinner at Kawaguchi was served in a main dining room downstairs. The meal was served kaiseki style as a series of small courses although scaled down slightly from the traditional full 14 dish offering.

The opening course of seared salmon sashimi was delicate but beautifully flavoured, quite literally melting in the mouth, orange juice giving it a contrasting citrus tang. 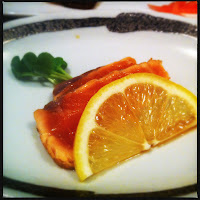 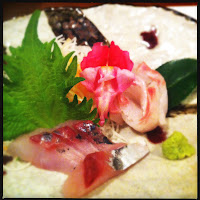 Unagi was cooked well with a sweet teriyake style coating and served with wasabi broccoli but the tiny bones in the eel and the accompanying skin put me off too much. It is however, considered to be a valuable delicacy so in it went with a smile on my face. 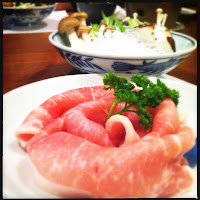 The Mukōzuke was sashimi of sea bream and mackerel. Tasty and prettily served on a tiny dish.
The Shiizakana course is usually the most substantial of the meal and in this case was a pork hot pot.

The ingredients are served chilled and fresh on a tray and you then cook them in the broth as you like it. The broth was unusually creamy but quite delicious based on clams and the slices of raw pork loin cooked in only a couple of minutes. Additions of enoki mushrooms and a pak choi/ cabbage like vegetable added crunch. Small chinks of silken tofu added yet another textural dimension. 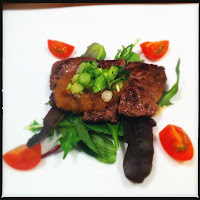 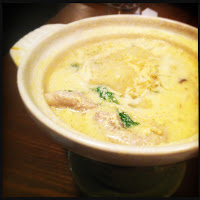 Another course of seared beef served with spring onion and yuzu was excellent and I could quite merrily have just eaten a large plate of the beef with some rice and been more than happy. I can’t quite find a course within the traditional kaiseki meal that fits the beef so I think we were probably winging it a bit. The next course of tamago and snow peas was a delicate end to the savoury part of the meal.

The Mizumono conclusion to the meal was  an orange sorbet acting as an effective palate cleanser.﻿﻿

The ryokan was also the location of our first taste of sake during the trip. I had tried sake in England but only ever had it served hot which I didn’t like and rather short sightedly it had put me off. I don’t know why it had never occurred to me just how varied sake can be, after all if wine can be broad in its styles and appeal then there is no reason why sake can’t be either. This one had a very delicate, slightly sweet flavour and was served ice cold.

Although after a relaxing onsen and slow paced dinner it is very tempting to retire for the night in a happy glow, but if you visit Miyajima please, please do make the effort to drag yourself back outside and go for a walk at night. The knee high stone lanterns along the sea front are lit and provide the only light by which to navigate the island as by nightfall all the shops are shut and boarded up for the night. A quiet peace falls broken only by the wind whispering through the lanes. The entire island is a very different place to the brightly lit, gaudy rows thronging with crowds souvenir hunting during the day. 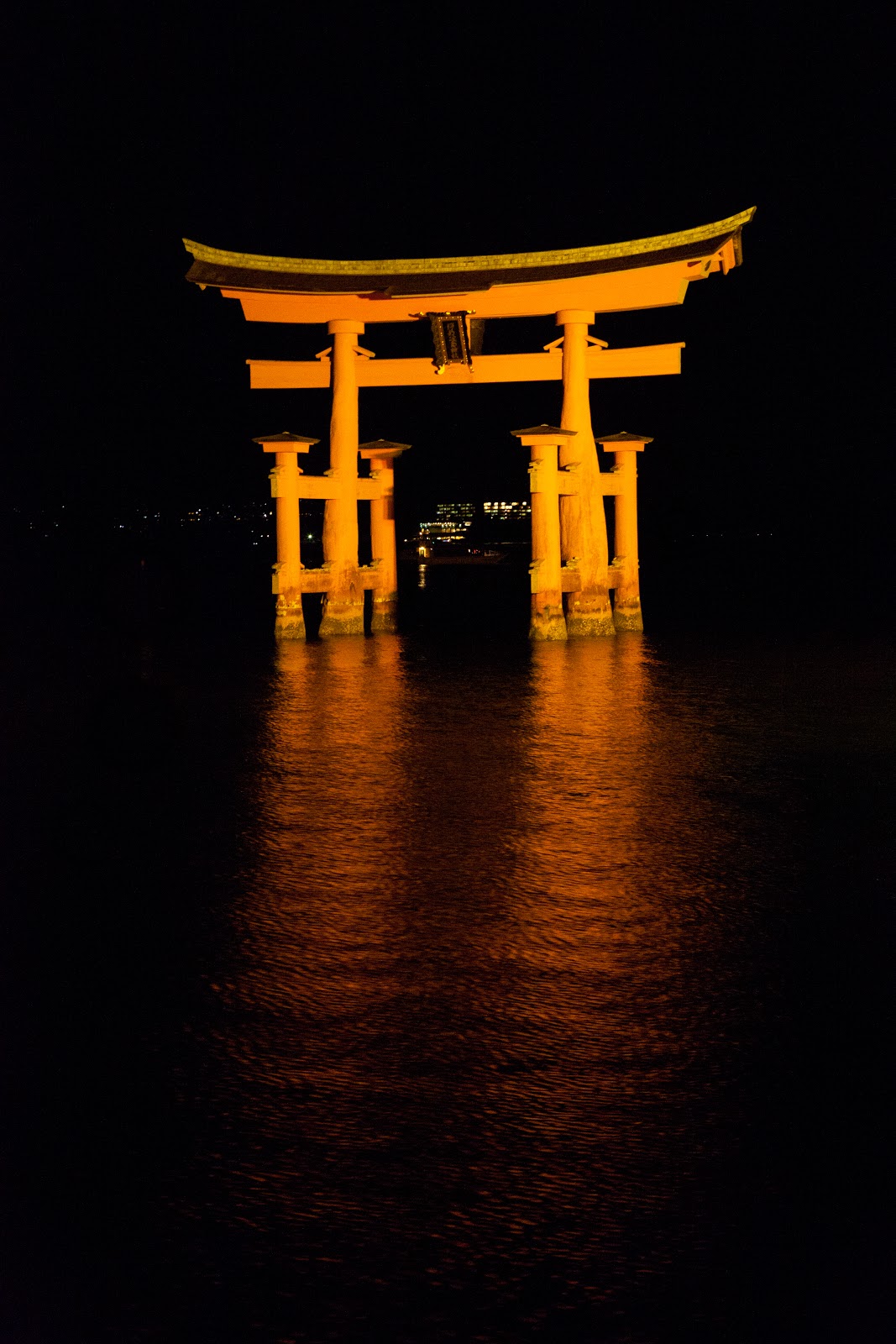 Personally I couldn’t go to Japan and do an entire trip purely of ryokan stays. Whatever any die hard purists will tell you to the contrary, tatami mats are not comfortable and despite layering up the mats a la princess and the pea, it is still not a good night’s sleep.  Doing everything at floor level is also kind of touch on the knees. I hate old that makes me sound and feel but sadly its true! It’s a great experience and lots of fun to dress up in a yukata etc but you do find yourself thinking about mattresses and duvets in a much more obsessed and yearning way than seems entirely right.