Wimbledon isn’t know for its wealth of culinary creativity. Wimbledon town is home to a plethora of eateries many of which sadly are more of the Walkabout/Nandos variety. There is even an establishment called Jimmy Spice’s “World Buffet” which boasts of its prowess in the fields of Chinese, Indian, Italian and Thai cuisine. (£9.99 for unlimited Tikka masala with your lasagne with your spring rolls anyone?) An impressive breadth of purported skill for any chef.

If you venture up the hill to swanky Wimbledon Village, the inhabitants may be somewhat wealthier but the food on offer to them is still not as high quality and varied as you might hope. There are, of course, exceptions to this rather bold statement; the Lighthouse does a decent supper and I’m dying to pay a visit to the comparatively new Lawn Bistro whose menu sounds lip smackingly enticing but in general I wouldn’t race across London at the prospect of eating in SW19. I’m quite sure there may be many delightful establishments in both the Village and Town that I just haven’t been fortunate enough to visit yet but from experience so far, that has not been the case. Wimbledon’s attitude to food was summed up for me by the manager of Claude Bosi’s Fox & Grapes last summer during one of the most apalling meals that I have ever had the misfortune to encounter (and the only time that I have ever walked out of a restaurant without paying for some of my food) when, upon paying £25 for a lobster and being unable to scrape more than a forkful of lobster out of its dried out carapace I was essentially informed “well what do you expect for £25, this is Wimbledon?”. I don’t care if I’m in a 4 Michelin Star restaurant on the moon, if its billed as lobster then there had better be lobster in it, end of. I hope that said manager has since experienced what £20 will buy you lobster wise in Mayfair… 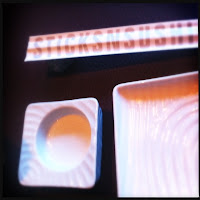 Anyway, having set the scene for the general gastronomic malaise in SW19, back to the matter in hand, Sticks n Sushi.

Ordinarily I would have a rant about the use of the rather irritating “n” in the middle of the name. It could be interpreted as an uneccessary attempt to be trendy, albeit in a rather 90’s way. One might ask why the more sedate ampersand couldn’t have been deployed ? – ‘Sticks & Sushi’ looks much more classy. However, on the basis that S&S (I’m going to use the ampersand even if they don’t) already has nine outlets in its native Denmark I will let it drop. Yes, you did read that right. Nine outlets in Denmark then one in Wimbledon, unusual business expansion plan maybe but one that I very, very much hope will work for them- there is certainly the gap in the market.

Located on Wimbledon Hill in the bit that straddles the area between super posh and well, not so posh, its easily accessible and is going to be a big hit. It’s only been open a month and local Wombles L&S already seem to have eaten there multiple times per week (enough to ask for a loyalty card and no, there isn’t one. Yet.) I joined them on a rainy Wednesday to sate my Japanese food habit recently acquired in the land of the rising sun.

First impressions of the decor are that this is a pretty huge floorspace (maybe explaining why they opened in lower price per sq ft Wimbledon & not Soho). Decorated in the kind of luxe/industrial that Scandinavians seem to do so well; big silver pipes and ducts overhead, a giant brick print curtain across one whole wall but with low lighting, touches of leather and ergonomic wooden seating to keep it classy. 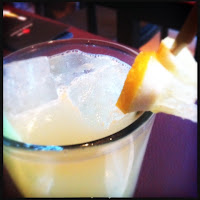 The cocktail list is not massively extensive but uses more unusual Japanese ingredients and had enough choice that I struggled to make my mind up opting first for a yuzu and whisky creation then later for a yuzu martini. I love yuzu and find it unlike any other fruit flavour despite the fact that it is often described as a Japanese lime. They are, however, virtually impossible to find in the UK. Indeed S&S confirmed that theirs are shipped in monthly from Africa. So my yuzu quest continues, if anyone finds any let me know! 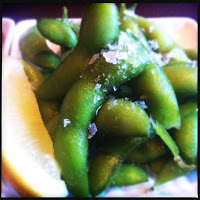 Yasaisticks (posh name for raw vegetable bits) with miso dip were tasty with the tip offering a rich and powerful umame flavour. The ubiquitous edamame beans served alongside crackers were also fine.

S&S offer a variety different fixed platters of different size and shape some majoring more on the fish side of things others of the cooked chicken variety. Quirky names like “bankrupt”, “green keeper”, “man food” and “four meal drive” give you a clue as to their content. You can also go down the a la carte route but platters are the most cost effective way to get a taste of lots of things.

A wealth of yakitori options are on offer. From the traditional terikayi chicken type options to the less Japanese sounding goats cheese & ham or beef and herb butter they all sounded divine and (unusually for fussy old me) I could have merrily eaten all of them. There are so many bad examples of how not to do fusion cooking out there so it was a pleasant surprise to find one that really works. Although Japan and Denmark are geographically distant, gastronomically there are certain parallels; clean, simple flavours and presentation and a fondness for fish being just a couple!

We opted for a Sticks n Sushi platter with additional choice for three. Here is what a two person portion looks like on their website and, unlike many establishments, the picture was near as dammit true to life. Yum.

Salmon, hamachi, prawn & tuna nigiri all consisted of good quality, fresh fish and well seasoned rice. Hard to say anything beyond that, very nice but nigiri is nirigi really. 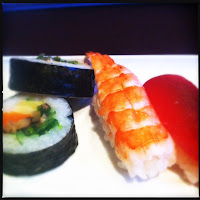 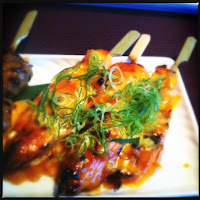 The yakitori was where S&S really shone. The tsukune chicken was a stick of seasoned minced chicken meatballs, asparagus with bacon gave a salty crunch but the best by far was the chicken teriyaki with spring onion yakitori. The sauce went beyond the usual teriyaki and was thick, gelatinous and very moreish whilst the chicken was juicy and grilled to perfection.

Highlights of the Uramaki inside out rolls were the  ‘Tuna sparkling roll’ – the sparkle taking the form of some orange shiny roe and the ‘Cut the … roll’ consisting of surimi, sugar snap and sesame.

Dessert was one of the real highlights of the meal. Usually in Japanese restaurants (and indeed in Japan itself) there are not a huge variety of desserts designed for the western palate. Mochi and red bean paste take some getting used to. S&S however, has chosen to take the route of offering desserts with a Japanese twist, for example. The desserts on offer are much more varied and interesting than those listed on their website. 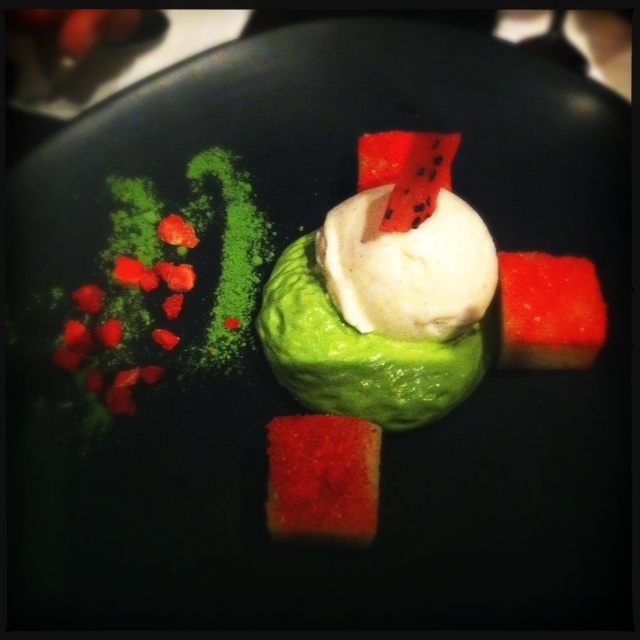 Espresso chocolate fondant was topped with crispy caramelised hazelnut pieces and served with a creamy hazelnut ice cream. The fondant was just molten in the middle- a minute more in the oven and we’d have been in trouble- and the flavour of espresso was prominent without being overpowering. All in all, a seriously good dessert. Creamy green tea parfait held a vivid and deep matcha flavour with the red of strawberry nougat made a colourful contrast on the plate. Cubes of financier added a more solid texture to the dish.

Service was extremely attentive and really accommodating. I’m allergic to avocado which can make sushi a minefield but the chef prepared a special platter for me, not something many places would do on a fixed group menu. Both the yakitori and the sushi were both equal in quality to anything that I tried in Japan last month and, in some cases, much better. High up my list for next time will be the scallop kataifi yakitori where scallops are wrapped in a crispy birds nesty thing and also the ebi bites, looks like a type of prawn popcorn – sounds delicious. I will be back again very soon!