I hold my hands up and admit that I am a nightmare to travel with. ﻿ Half the fun is in the advance planning for me and several months can be spent researching locations, restaurants, transport, weather. You name it and there is a fair chance I have researched it. So when it came to planning a trip to Japan one of the major criterion was weather and more specifically blossom or sakura. I consulted various websites detailing the bloom dates in various towns over the preceding five years to try and ensure guaranteed blossom.  So we arrived. No blossom. Not a problem, still two and a half weeks of the trip to go and quite a journey south. Two weeks on and down in Kyoto there is still no blossom. Back to Tokyo and our last full day in Japan having left Ueno Park to the last possible moment, perhaps most famous for its blossom and the hanami parties- essentially picnics- held under the trees.  There were odd patches of blossom so I didn’t go completely without…

In summary a grey, windy and rather chilly day was not how I had hoped my Ueno Park experience would pan out….

We started in the north of the park from Ueno station on the JR train line. At least nine  museums are located within close proximity including the National Museum of Science and Nature , the Ueno Royal Museum, and the National Museum of Western Art. as well as Tokyo zoo. Wading through the hordes of overexcited groups of Japanese schoolchildren we headed towards our target for the morning, Tokyo National Museum. 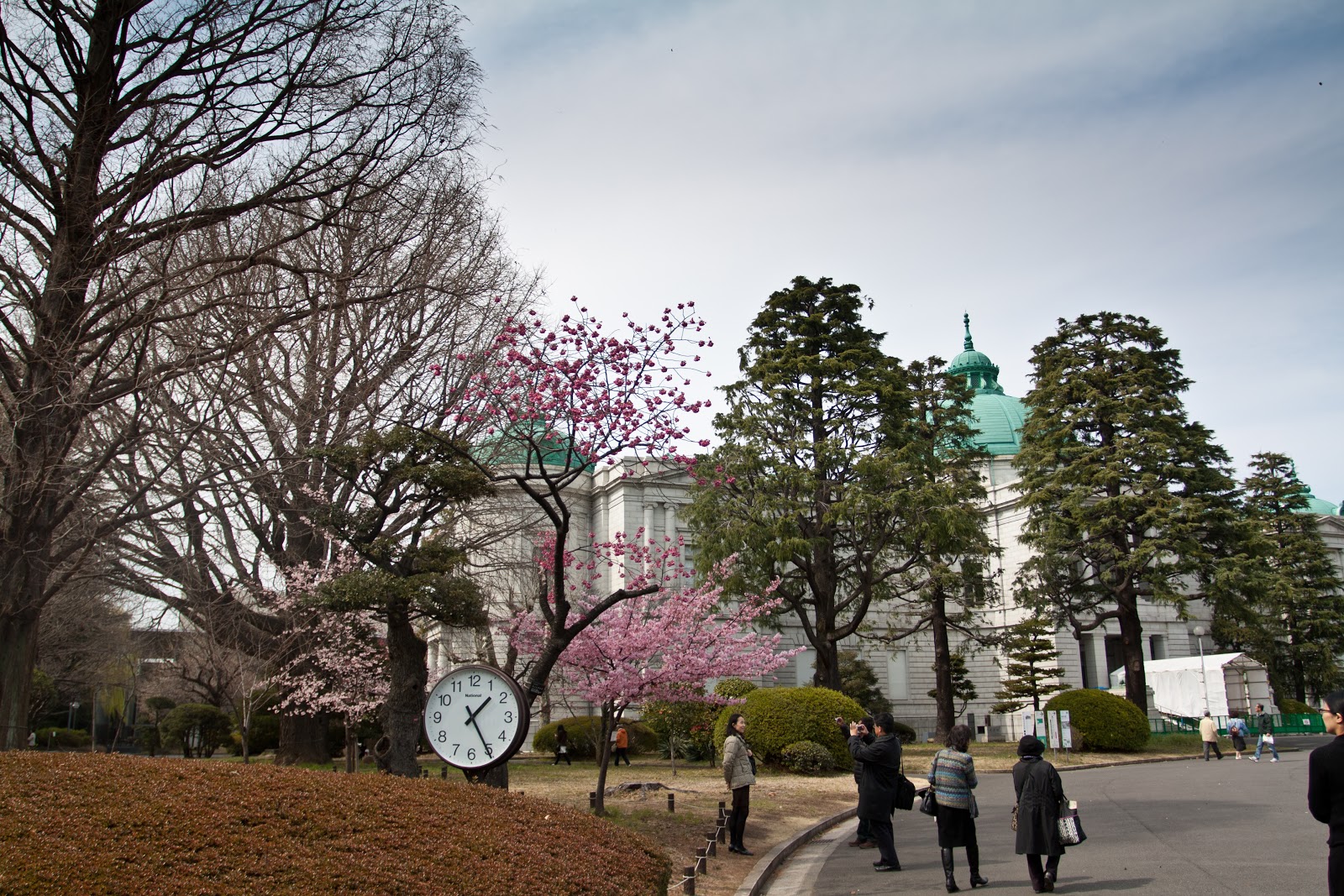 Tokyo National Museum is worth a visit if you are interested in better understanding some of the historic Japanese periods throughout the ages and seeing artefacts from each era.The building it is housed in is also quite beautiful. Just like the British Museum or the Met in New York, you could spend an entire day there and only scratch the surface but for me it was more interesting to dip in and see a few of the highlights to get some context to what I was seeing elsewhere.  The park is far from being only about museums, it also holds several shrines including the Toshogu Shrine (close to the zoo) and Bentendo Temple in the middle of Shinobazu Lake.

I had heard stories of how lower ranking businessmen are sent by their bosses to sit all day and guard the best sakura spots but had never quite believed it to be true until I saw it with my own eyes. Junior accountants, lawyers, management consultants all suited and booted just sat, all day, on a blue tarpaulin awaiting the arrival of their colleagues after hours.

One thing that cannot be disputed is that the Japanese truly do LOVE blossom. Gaggles of people were crowded around the few trees already in bloom taking pictures on everything and anything from top of the range Canon SLRs to the most basic of mobile phones. Much posing and peace finger signs ensue. 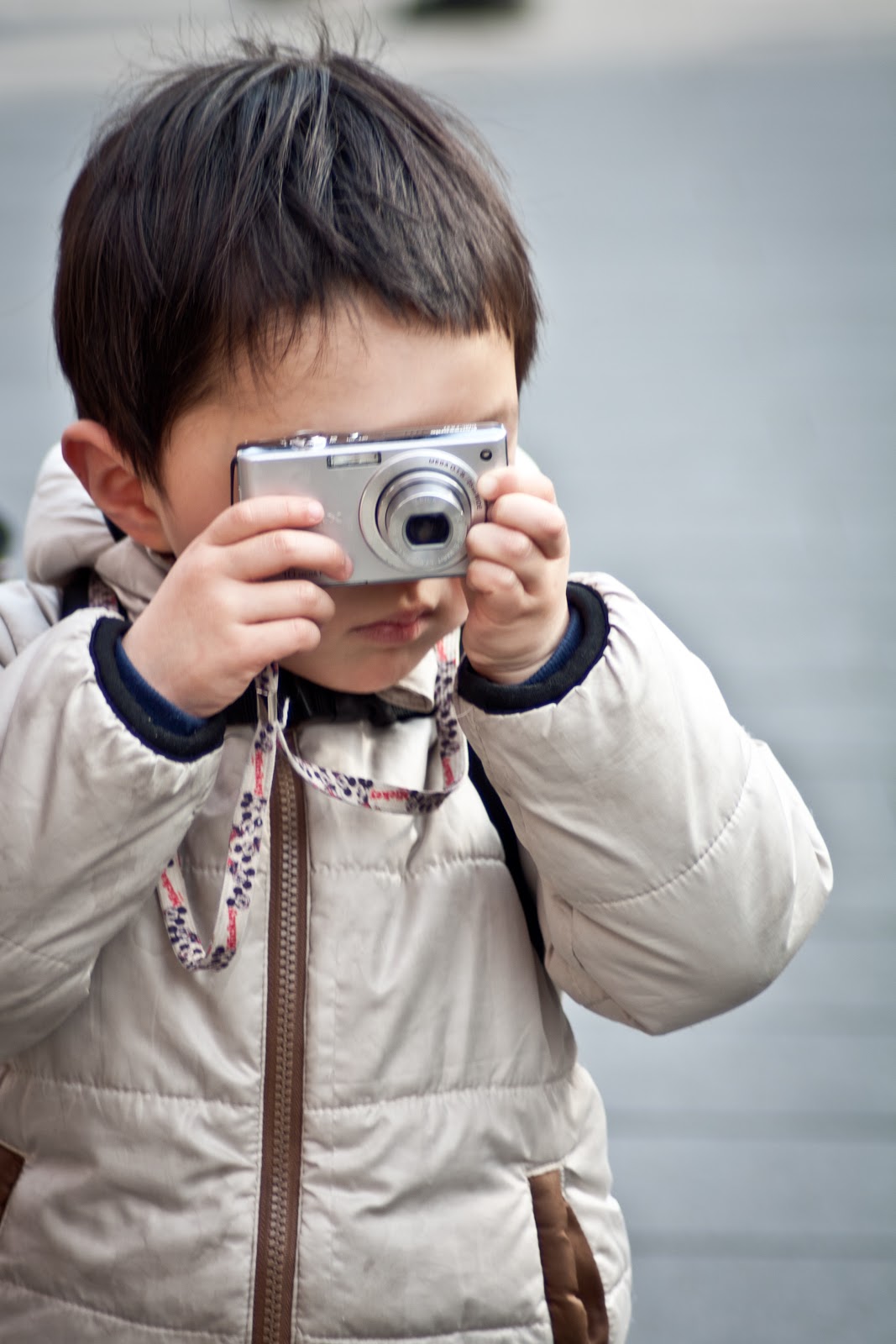 Wandering down along the long, straight lane of over 1000 cherry blossom trees, around a quarter were about to bloom and many early sakura hunters were out in force. ﻿﻿ Restaurants and shops all release special sakura themed dishes or products, even international companies get on the bandwagon, I came home with a limited edition Le Creuset blossom shaped tea set and Lanvin, Celine and Dior sakura handkerchiefs all at much lower prices than the non limited edition would be at home.

Reaching the Southern end of the park I took a detour towards the lake. During sakura season numerous street food sellers line the bridge that crosses to a small islet set out into Shinobazu Pond. 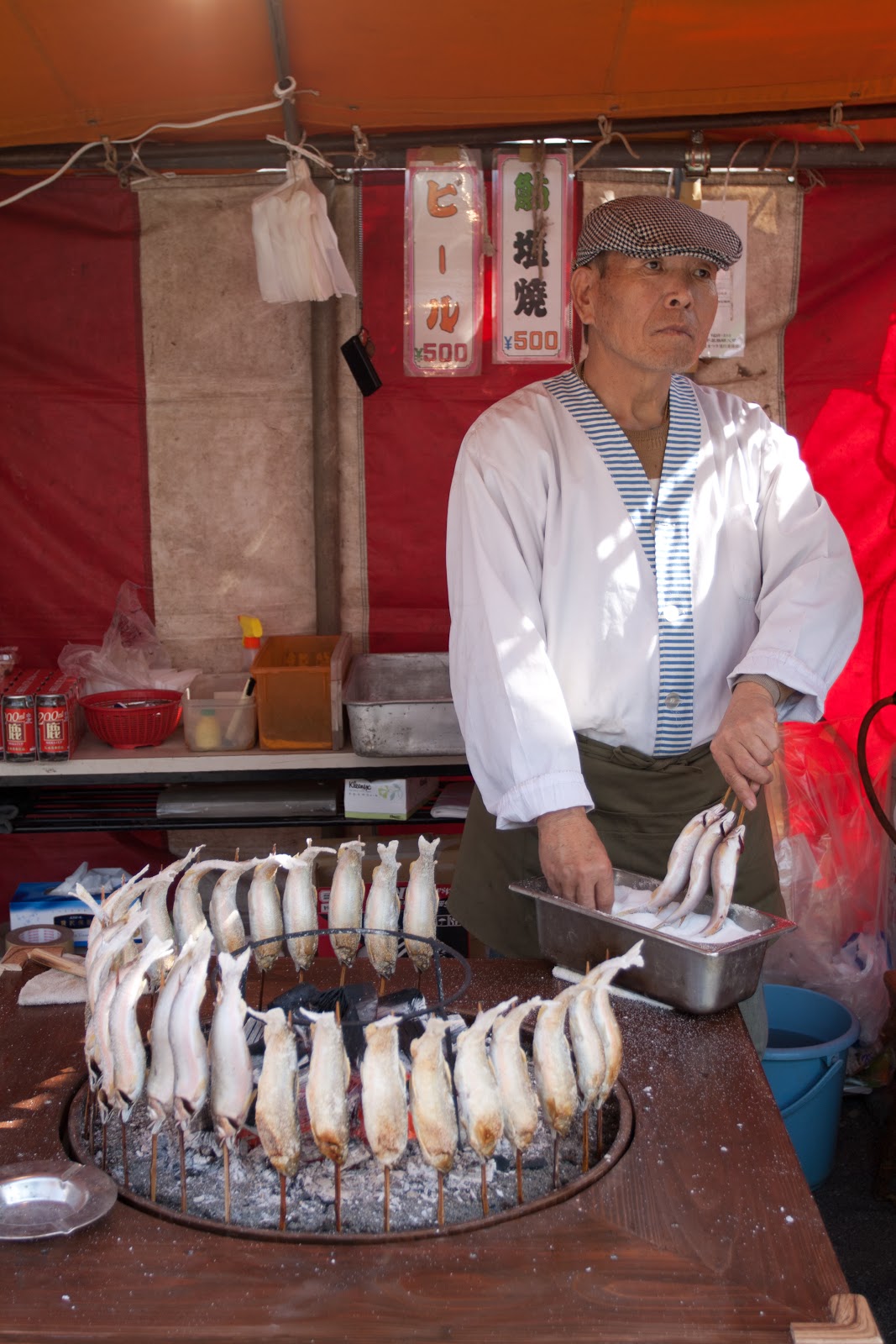 All kinds of weird and wonderful sweet and savoury finger foods are on offer and stalls are busy with passing trade.   I ordered a barbecued chicken yakitori stick. In all honesty it was a bit disappointing, too much overly sweet sauce but it was a bit early in the day for salted sardine or chilled octopus kebabs.

Locals and tourists weren’t the only ones eyeing up the seafood…. 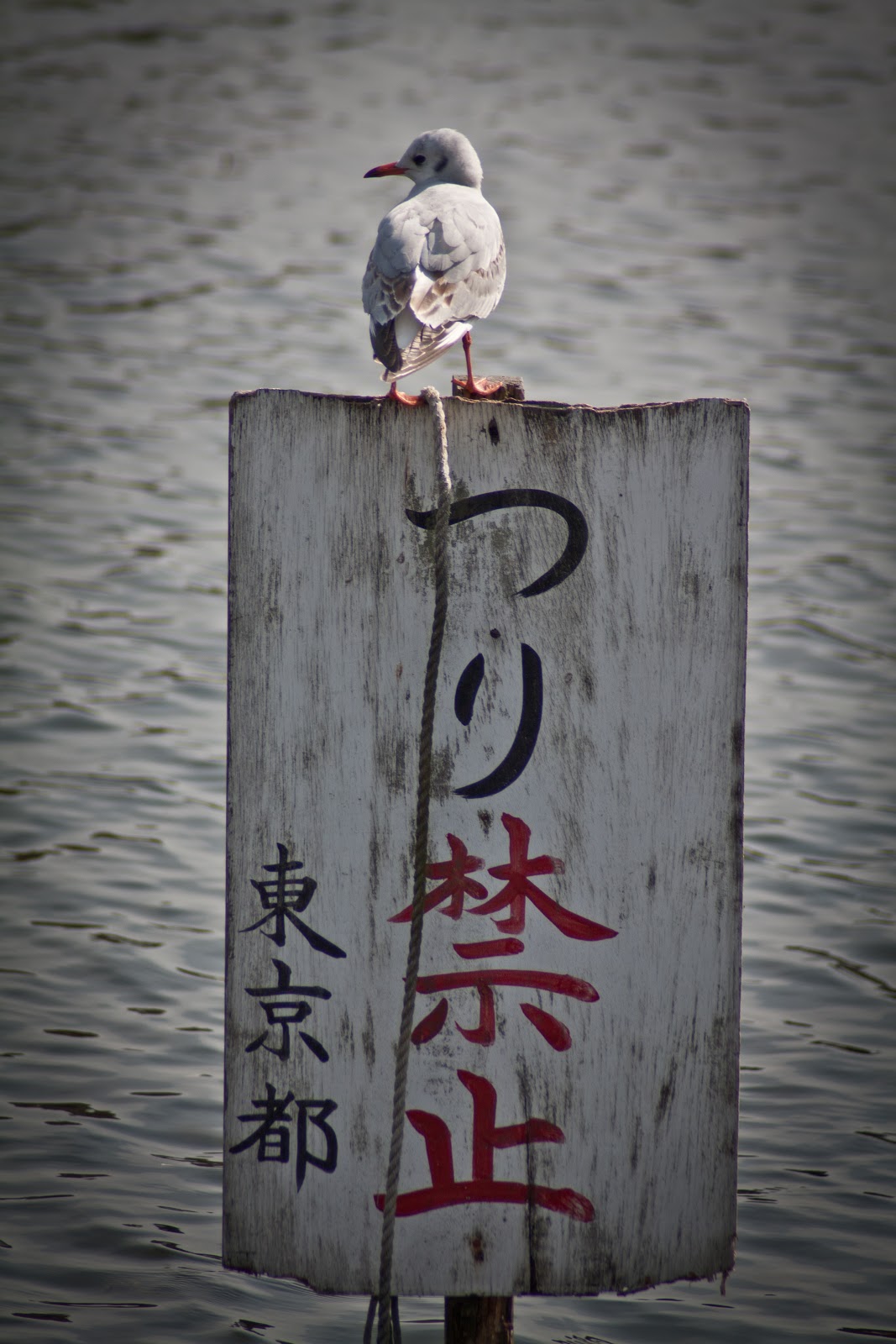 You can’t go to Tokyo and not visit Ueno Park no matter the time of year- it is such a melting pot of Japanese culture and a relaxing spot in an otherwise non-stop city. 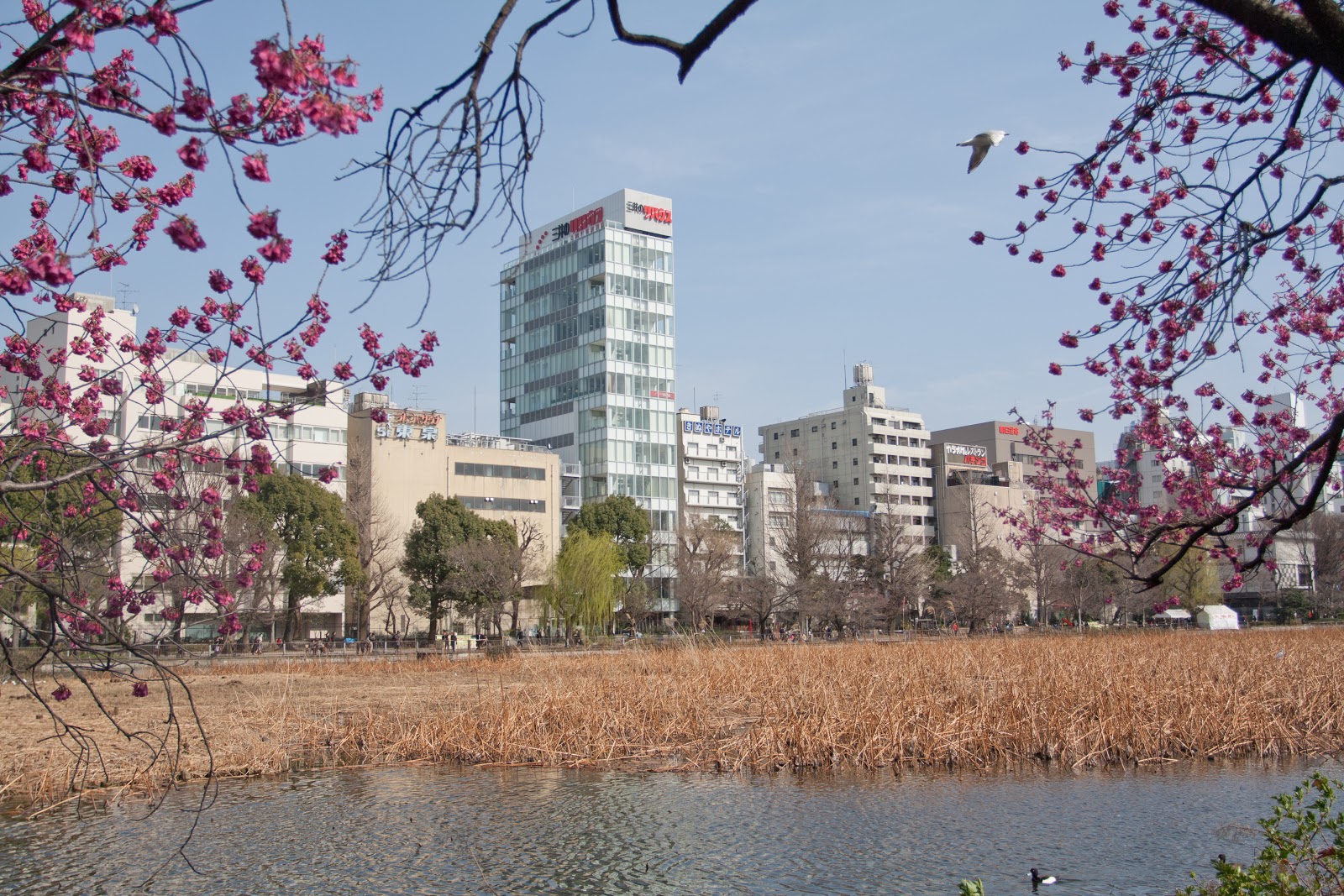