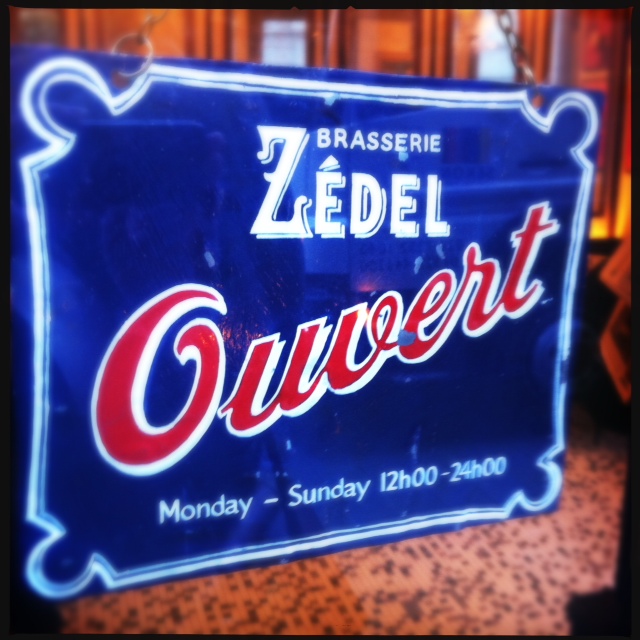 Brasserie Zédel is a very welcome newcomer to the Piccadilly Circus area. Brought to London by the Corbin/King team behind the much pricier but quite lovely Wolseley and Delaunay, I knew to expect good quality grub set in European Belle Epoque style surroundings.

Walking in past the ‘authentic’  “Ouvert” sign (but not so authentic that the opening days are in French- us Londoners and tourists alike cannot be trusted to know that lundi means Monday) I was greeted by what seemed to be a pretty small café with suitably art nouveau posters on the walls and newspapers hung on reading sticks. Nice, but not what I expected.

Catching the lift downstairs past the old fashioned cloakroom and heavily mosaic decorated floor I was really rather shocked when I walked through the curtains into the main restaurant to be greeted by hustle and bustle and a wall of noise. It is huge, HUGE I tell you. The general first impression is rather an assault on the senses. In a good way though. Waiters fly by, trays held aloft, sporting black waistcoats and long white aprons. You have the option of taking a pre or post prandial drink at the highly mirrored and polished brass bar or taking a banquette and digging straight into the menu.

Taking all this in, the cynic in me did wonder whether this was just a highly skilled pastiche on what the creators would like us to think that a nostalgic French bistro should be like. It felt almost a bit too polished to rival the big old Parisian bistros- waiters with pencil behind the ear ready to write your bill on the paper tablecloth- but not chic enough to be another Wolseley. But it turned out that I was being just too cynical – bad habit of mine.  Sat next to us were an ex-pat French couple who told us that they come to Brasserie Zédel every weekend because it is the only restaurant in London they have found that really reminds them of home in Paris. They originate from the Grands Boulevards/ 2eme area of Paris where Chartier has been renowned for the last couple of centuries.

Chartier has been getting a bad rap recently on t’internet and Twitter mainly due to how touristy it has become in recent years and the generally caustic & insouciant nature of the waiting staff but it will always hold fond memories for me. Aged 18 and on a school trip to Paris consisting of 15 girls (pity the one poor male teacher) in the middle of the Algerian freedom fighters bombing campaign of the mid 1990’s, and Chartier was the first proper French bistro I had eaten at. In those days it was possible to get a 3 course bavette steak dinner with a small pichet of wine for less than a tenner and although prices have increased a little over the years (eeh gads, I’m getting old…) it is still at the cheaper end of the spectrum at around 11 Euros for a steak.

Granted, Zédel is of the slightly more chic restaurant model and the service much less surly than that of the vieux serveurs of Chartier, however the principle is the same: good value traditional french cooking in a bustling, turn of the century, canteen style atmosphere.

Brasserie Zédel was clearly a very nostalgic journey for me above and beyond the Chartier link as I ordered a red Pineau des Charentes as my aperitif. Many childhood holidays were spent on the Cote Atlantique and throughout the Vendée where Pineau des Charentes is both plentiful and delicious, served chilled before a barbecue following a day playing in the surf.  Usually a combination of Cab Sauv, Cab Franc and Merlot, it is fortified using eau de vie and aged for over a year. That said it is comparatively light and fruity but with port-like sweetness, at £3.50 a glass it is worth a try. 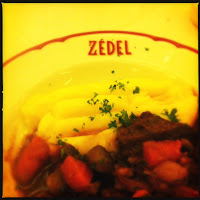 The menu is familiar territory, you know what you are getting with a cassoulet, ham hock terrine or a bourgignon so no one is reinventing the wheel here, it does what it says on the tin. For that reason alone I can foresee that Zedel will become a very welcome shopping or pre-theatre pitstop. I ordered a boeuf bourgignon which at £9.50 was not a massive portion but still very good value.  Meat was suitably slow cooked and fall-aparty (yes that is a word). Silky, slick  baby onions gave a burst of caramelised sweetness as they melted into the mouth. The mash is also excellent. Smooth with no lumps in sight and fluffy as a cloud. Mashed potato is always a strong indicator for me as to the quality of a restaurant. If you put “crushed potatoes” on your menu then I am going to assume that your chef was just too lazy to peel or rice the potatoes. No such lackadaisical preparation here! 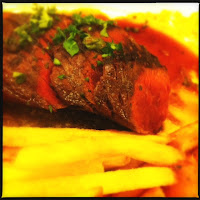 The onglet grille with confit d’echalotte is a bargain at £12.00. I have to admit to not having ordered it purely out of suspicion as to how good a twelve quid steak could be but regretted the decision when I saw H’s pre sliced beautiful red meat (and the chips weren’t bad either).

The wine list is interesting in that it is, of course, unashamedly French but also quite limited in its content. I’m a massive Gigondas fan, considering it a still underrated Rhone neighbour to the more ubiquitous Chateauneuf-du-Pape but at £46 a bottle for a wine just listed as “Gigondas” with no producer information that seems a little steep. I’ve had decent Gigondas in Michelin star establishments for less. Don’t get me wrong, if it’s a terribly good example of a Gigondas warranting the price tag then tell me about it to justify the price and I will gladly order it. This lack of chateau/ producer labelling extends to all the wines other than their “Reserve du Patron” section. I don’t this so much for a £24 Picpoul de Pinet or Corbieres but once you pass the £30/35 a bottle mark and I’d like to know a little more about what my hard earned cash is being spent on. This pricing and listing strategy does mean that some of the “Reserve” wines do come out looking comparatively bargainous, £78 for a 2007 Langoa-Barton – ok its not the best year going- but at least you have a good idea of what you’re getting. 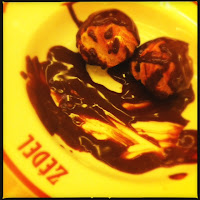 I didn’t mean to have dessert but then my Gallic neighbours ordered the profiteroles……. Perfect little choux puffs and a jug of warm chocolate sauce poured over the top, glistening and dripping onto the plate below. It was all I could not to reach across and wipe a chocolate smear from their plate but that sort of thing tends you get you kicked out of restaurants so I restrained and ordered my own. As you can see from the rather yellowy picture on the right, I didn’t manage to restrain from dragging my finger across my own plate.

The only real disappointment of the meal was the crème brulee. Large in portion size but far too sweet and cloying with a slightly perfumed aroma to it. It also had a rather gloopy consistency rather than a firm cream/custard texture. If I was being uncharitable I might guess that it had come from a packet mix but I’m sure they wouldn’t do that to us, would they? At £4.50 a dessert when the London average seems to be around £8, I guess there may be an element of “you get what you pay for” but I wouldn’t be ordering it again.

I also just adore the idea of the adjoining evening cabaret venue, suggestively named the “Crazy Coqs”, the gorgeous art nouveau decor is just crying out for Marlene Dietrich or Edith Piaf to pop up and break into song.
In summary, its not going to blow your mind or your taste buds but its utterly reliable and excellent classic French brasserie sustenance. To top it all off they take reservations, an anomaly amongst the West End openers of 2012.

On a cold winter’s day or night a warm, bustling subterranean cavern serving lovely little dishes of comfort food is utterly inviting, that said, I’m not sure I see myself visiting on a balmy summer’s evening. Nonetheless I expect that as those shiny, new decorations age Zédel will settle down to become a London institution for many years to come.