When people use the term “new world”, it can deceptively make you think of a recent comer to the table, somewhere with comparatively youthful experience of viticulture.  Certainly that was the misconception in my mind before visiting South Africa. Bear in mind that Klein Constantia was first planted in the late 1600s. Vin de Constance was revered throughout the 18th and 19th centuries by many of Europe’s top leaders and politicians being reputedly the favourite wine, ironically, of both Napolean and Nelson, the former allegedly requesting it on his deathbed. Even Jane Austen gave it a name check in Sense and Sensibility and Dickens in one of his unfinished novels. Not many vineyards can make that sort of claim to fame. 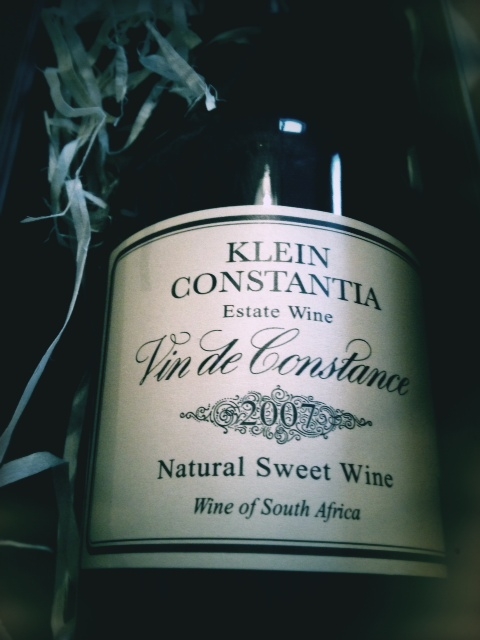 In the late 1800s an attack of phylloxera left the vineyard in ruins and little production took place until 1980 when the vineyard was purchased by Dougie Jooste and by 1986 the new Vin de Constance was being bottled.

I first visited the vineyard in 2010 not having really heard of Vin de Constance other than on the occasional restaurant wine list. My knowledge of South African wine in general was pretty shoddy and limited to the dreaded Kumala or similar in the supermarket. Located in the wealthy neighbourhood of Constantia a half hour drive outside of Cape Town, the vineyard is home to 82 hectares of vines as well as a tasting room for visitors and close by to Groot Constantia and Constantia Uitsig (both also worth a visit whilst you’re in the area). Its a beautiful and peaceful place to visit will rolling vineyards as far as the eye can see and when we arrived a gentle mist was being burnt off the valley by the morning sun.

The range of wines available includes a premium range of white and red (predominantly sauvignon blanc and cabernet sauvignon) as well as the standard estate wines and even a sparkling MCC totalling 10 offerings in all.

Those that I tasted were all pleasant, although my slightly hazy recollection is perhaps due to the fact they were living in the shadow of the great Vin de Constance. In fact two other KC wines in addition to VdeC were awarded a maximum 5 star rating by SA Wine guru John Platter the year I visited; the Perdeblokke Sauvignon Blanc and the Estate Cabernet Sauvignon so are most likely excellent as in my experience Platter knows his grapes.

The sheer number of vineyards visited over three weeks in South Africa meant that many of the wines and tasting rooms tried and visited blurred into one. Whilst the majority of wines were of good quality, only a handful of wines stood out as things I needed in my life. Meerlust Rubicon being one, Toren Fusion V another and then Vin de Constance. As I stood in the tasting room with a series of glasses balanced on an upturned oak barrel hearing about the muscat de Frontignan grapes that go into it, how the wine is made leaving the already shrivelled grapes to macerate a few more days after picking from the vine and the make up of the terroir, I took my first sip of what remains one of my favourite sweet wines. Rich, intensely golden amber colour, honey and apricot on the nose, marmalade with a little caramel on the palate, slight oiliness slicking your teeth but enough acidity to keep it balanced. Its just crying out for a slice of apple pie!

So that was then. Over the following two years I had bought the occasional bottle as a treat or for a special occasion but hadn’t laid any down. Towards the end of November 2012 Robert Parker’s team retasted the 2007 and upped its score to 97 points – the highest score ever awarded to a South African wine. Love him or hate him, just the name Parker tends to send demand for wines rocketing and this time was no exception.

Although until the middle of last year most vintages were retailing at the circa £25 mark, the revised Parker score focused attention on the vineyard and the 2007 and it is now not only hard to come by but when you can get it its closer to the £35 a bottle mark. With excellent prospects for cellaring- I’ve been told by more than one person that 40 years + would be perfectly reasonable- I’ve added a case to my cellar.

I have heard that the vineyard is planning the imminent release of a new drink “the Spirit of Constance” which may be venturing into the territory of a grappa style spirit. Whilst the new ownership and the more recent merger with Anwilka in Stellenbosch clearly spell exciting times ahead for the vineyard, I hope that it doesn’t lose its focus on the beautiful wine that is Vin de Constance.