Short and sweet this one. Well sort of sweet.  Haché is a small, family owned chain of burger restaurants founded in 2004. Their aim was to offer good quality, innovative burgers so in that respect you might say that they were the forerunners of London’s ongoing burger craze.

Haché, Clapham opened in 2012 and joins the current stable of four restaurants, the other three located in Fulham, Camden and Shoreditch.  These really are ‘posh’ burgers, there is a strong emphasis on steak mince provenance, in fact every burger’s name begins with “Steak”. Quite different in style to last year’s “dirty burger” trend; there is no industrial style, stripped wood and bare light bulb decor, no dark, cavernous atmosphere with thumping music just white tables and walls bearing glowing pink fairy light blossoms. Yes you did read that right; pink, flower fairy lights. Wouldn’t get those at MeatMission would you? The same pink blossoms are also found on the website along with some rather fetching little flickering stars. We’re definitely not talking testosterone central here; they even offer vegetarian burgers. That says a lot.

Haché offer a very wide variety of burger options to the extent that it rather feels like they are trying to be something to everyone; beefsteak burgers are accompanied on the menu by lamb, fish, duck and chicken burgers. Some are of the less usual variety (and quite possibly include ingredients that should never meet between bread bun halves on top of a beef patty) for example the ‘Steak Louisiana’ consisting of crunchy peanut butter and melted cheese. Others are of the more standard burger offering such as “Steak Canadian” (sweetcure bacon and cheddar cheese),

There are four options on the potato front, fries, skin on chips, wedges or sweet potato chips as well as a plethora of other sides. One thing that is for sure, there is certainly no shortage of menu options. Having had and enjoyed a blue cheese steak burger on a previous visit I wanted to try something different and went for a “Steak Bavaria” consisting of beef patty with smoked cheese. All burgers can be served on either ciabatta or brioche but for me brioche wins every time. Purists will hate the fact that lettuce is replaced by rocket in the burgers- personally I prefer it- but the tomato and onion remain. 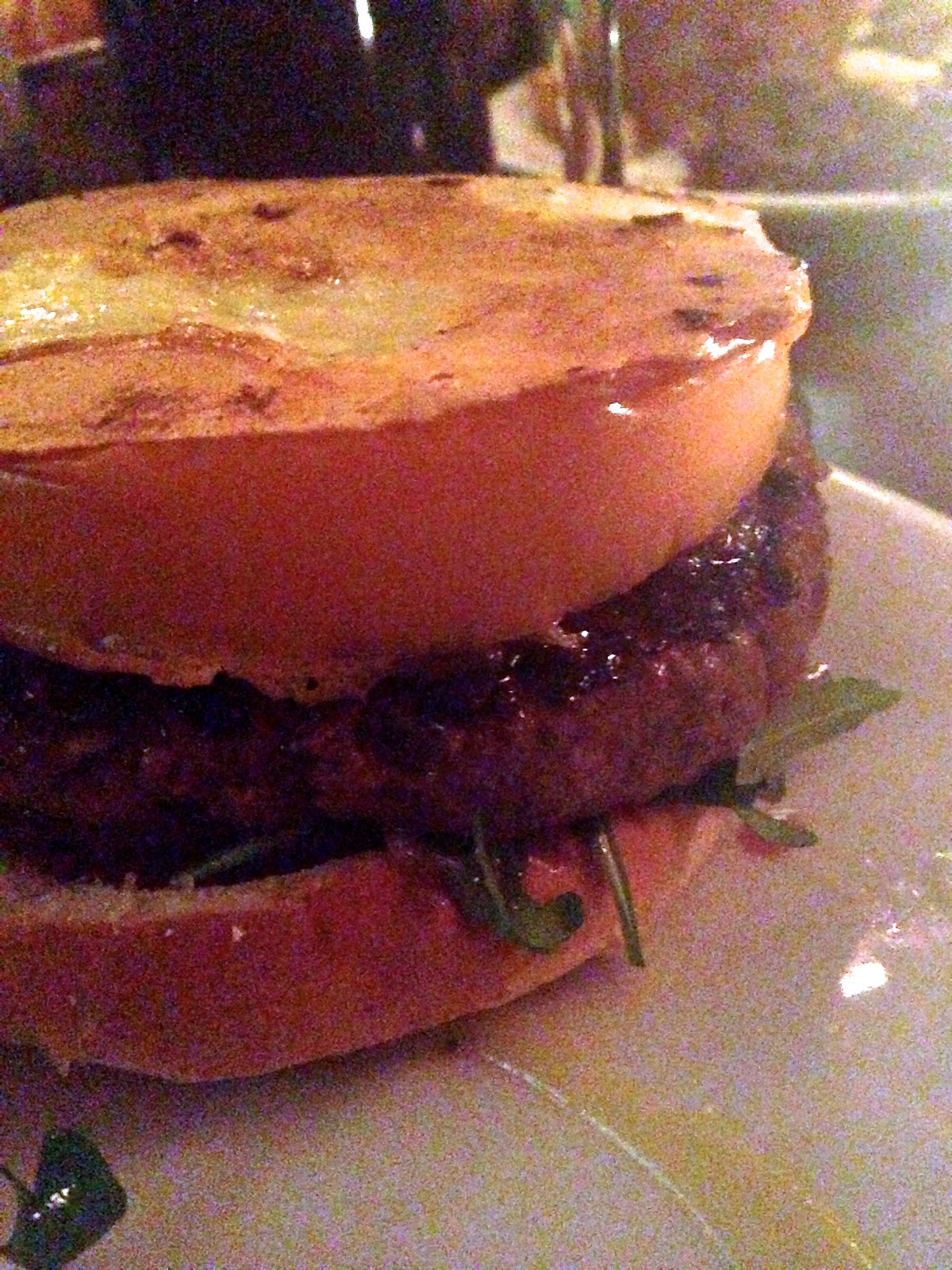 Now, just to clarify because I know its misleading at first glance, the inch thick beige rondel at the top of the photo is not the top half of the toasted brioche bread bun, it is, in fact, the biggest slab of Austrian smoked cheese that I think has ever been found in one place at one time before. To put it into context by volume there is more cheese than burger. It was a nicely cooked burger, pink and juicy in the middle and excellent quality steak mince with a decent char crisp on the outside but just too much cheese. Don’t get me wrong, I adore cheese and never thought that “too much cheese” were words that I would ever utter together so this is really saying something.

The wine list is nothing to write home about, six whites and six reds. You get the feeling that it was not put together by someone who is passionate about wine. One of the whites is simply described as “Chenin Blanc, Stellenbosch: This famous Loire grape is soft…..”. Where to start? Well which vineyard is the chenin blanc from? Granted yes chenin blanc is widely grown in the Loire in France but if its South African wine then it seems a little odd to describe it as Loire, you wouldnt call Chilean Cabernet Sauvignon ‘Bordeaux’ would you?
I ordered a bottle of the “Kleine Cabernet Sauvignon” on the basis that I guessed it might be Kleine Zalze (it was, not sure why the ‘Zalze’ was missed off the menu). At £22 a bottle its a significant mark up on the £8ish retail price but not a complete shocker.  Decent blast of red fruits with a little bit of peppery heat, it works well with a burger and stands up to the chargrill and cheese.

At around a tenner a burger and £3 for chips we’re not into breaking the bank territory and I would go back again if I was looking for something reasonably priced and quick before the cinema but I’m not sure I’d agree with whichever reviewer is quoted on their website as having suggested it as a romantic date location. In the Clapham area they are clearly still doing something right however as at 7pm on a Saturday evening they were packed with people queuing up for a table. The atmosphere was very buzzy and – perhaps due to how close together tables are- very, very hot.

Haché proudly display French newspaper, Le Figaro’s review of the restaurant naming it as the king of burgers in London. Given that Paris isn’t too well known for its burgers I’ll take this with a pinch of salt. In 2005 Time Out apparently described Haché as “the best burger restaurant in London“. They are undoubtedly tasty and well cooked good and provide more of a traditional dining experience than lots of other currently acclaimed London burger offerings. Times have changed though and really good burger offerings have become ubiquitous. In summary, in 2004 this place would have been a great find. In 2010 even, but I think that were Time Out to be awarding a 2013 title of Best Burger in London, it more than likely would not go to Haché.