Kit Kats are Kit Kats right? Like Coca Cola and McDonald’s fries, they are the same the whole world over. Except in Japan. Different flavours are launched on a regional basis. Sure, we have the current spate of flavours in the UK but by including mint, orange and hazelnut they are hardly pushing gastronomic boundaries flavour wise. I had heard tell of the unusual flavour phenomenon found only in the land of the rising sun and wanted to explore it however on my first visit, despite hunting high and low, I was only able to find two “weird” version of Kit Kats in the form of green tea and secondly cinnamon.

Apparently the reason behind the success of the humble Kit Kat relates to its meaning in Japanese. Phonetically it sounds like ‘kitto katsu‘ which roughly means ‘good luck to you!’ Kit Kats are therefore offered as good luck tokens. The Japanese also have a tradition of taking cakes or sweets to people that they are visiting when embarking on a journey. Therefore, by making different Kit Kats limited edition to certain regions they attract a certain collectability.

After putting together a small panel of expert chocolate eaters (aka work colleagues) each flavour was scientifically contemplated and compared (aka wolfed down at coffee break time) especially for this post. 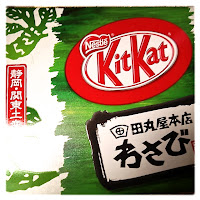 Wasabi was a little disappointing. It had a gentle horseradish type smell on the nose but was less exciting on the palate. Having tried Lindt wasabi chocolate which has a decent kick to it, I had expected a local Japanese version to, if anything, pack even more punch. On the contrary it was predominantly white chocolate with a slight hint of wasabi. Kit Kat flavour fail…. 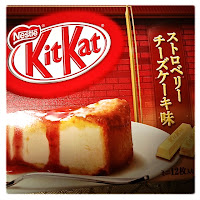 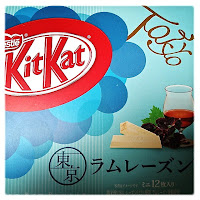 Rum and raisin. This is possibly the one that I had been looking forward to the most and it didn’t disappoint, a really distinct rum flavour pervaded throughout and was actually properly yummy, I’d be up for trying to persuade Nestle to do this one in the UK. Would have been better covered in milk chocolate than dark chocolate though. That said one of the samplers disliked this one the most. 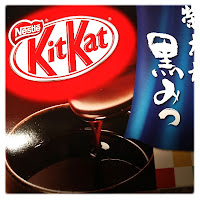 Brown Sugar Syrup I’m not sure that I even know what brown sugar syrup is? I’m guessing that its something approximating treacle as that’s what I got an olfactory blast of when I opened the packaging. Tasted something like treacle in porridge all in all though probably due to having been coated in that damned white chocolate again. Rather overly sweet, If it had been dipped in dark chocolate it would have been really rather lovely, shame. 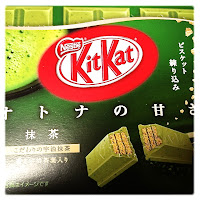 Matcha Green Tea  This remains one of my favourite flavours and tastes exactly like proper powdered matcha tea. The lurid green chocolate is quite alarming at first but all part of the fun… 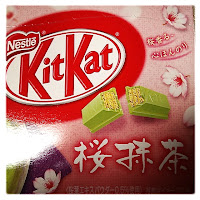 Green tea and sakura blossom flower. YUM. I was being pretty cynical when I opened this one. After all, the Japanese are bonkers about blossom. Literally everything has a limited edition blossom themed version in the spring, even beer. Cherry blossom is also used widely in Japanese cuisine and has a really delicate pretty flavour that is also quite distinctive so I wasn’t hopeful that it would be too faithfully reproduced in chocolate biscuit form but sure enough it was. 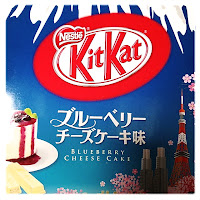 Blueberry Cheesecake-This one came packaged in a very cool Mount Fuji shaped box. Good job it had something going for it as this was my least favourite of all the bars. Didnt taste much of actual blueberries just more of that sticky sweet white chocolate with an indeterminate fruit flavour. I’m soooo over the white chocolate thing now and getting grumpy despite the sugar rush….. 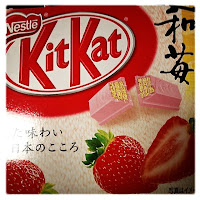 Strawberry. Unlike the cheesecake version, this one was covered in pale pink chocolate and had a more distinctive strawberry flavour although it was that synthetic strawberry taste that you get in bootlaces and medicine.

If we could routinely get them over here I would buy the green tea, the green tea and blossom and the rum & raisin but I wouldn’t bother with the rest.  The rest of the tasting panel agreed that they are too sweet even for chocolate lovers. More gimmick then flavour and substance. I love the idea though. If you wanted to give them a whirl and don’t know anyone headed to Japan any time soon you can get them on Amazon albeit it at a price!