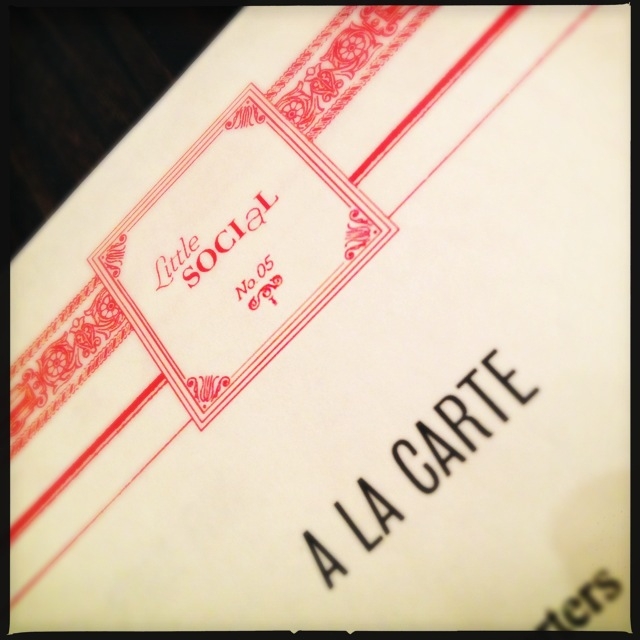 Little Social is the latest venture from Jason Atherton of Pollen Street Social fame and is conveniently located right over the road at 5 Pollen Street.

Other than the inevitable “foodie” Twitter buzz, the launch of Little Social has been comparatively quiet. When I booked it had no website and the phone line was shared with Pollen St Social (I see a basic website  and menu has now gone up). None of the crazy overhyping seen from some other recent new openings. From my experience I found it rather unfair of Gillian Orr in the Independent to make negative comparisons regarding inaccessibility and overhype with places like Bubbledogs and Balthazar. I called Little Social on a Tuesday and got a Saturday table in the first week of opening without any problem. That’s two bonus points above Flat Iron for starters 1) they take reservations and 2) they deign to speak to their customers on the telephone.

It seems that the intention is that Little Social will be a more laid back affair than its Pollen Street sibling and will aim to offer a traditional French bistro style experience. Dangerous perhaps from more than one perspective. We’ve already had the likes of Giles Coren in the last couple of weeks lambasting Balthazar for transplanting an American interpretation of French casual dining over to London. 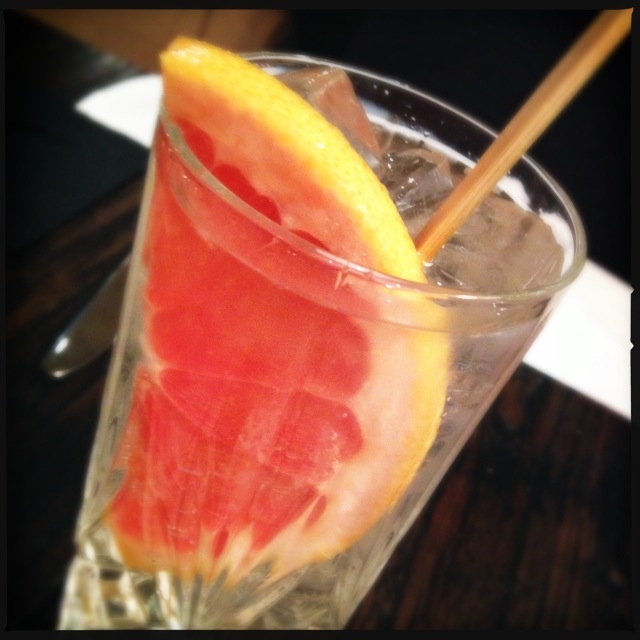 Dangerous also because simple food is often the easiest to go wrong with. Traditional French bistro fare sounds so easy in theory, steak and chips, ham hock terrine, these are all classic, French basics, but its amazing how one little blip leaves them utterly wrong. Perhaps the reason they are so tricky to get spot on is due to their very simplicity- there is nowhere to hide. One slip up, a soggy chip or a slightly overdone pastry and the whole thing is effectively ruined.

Cocktails are excellent, original and beautifully served. At around £12-14 each they aren’t the cheapest but I guess that’s becoming the standard West End price bracket. We tried and liked an “Au Pear” –

The wine list is really very disappointing. We had called ahead and asked about corkage rates as a friend had a bottle of Ch. Palmer that “needed drinking” but were told resolutely that outside bottles are not permitted even to those willing to pay to bring wines that have no comparable offering on the house wine list. Fair enough but if that’s your policy then you had better have a damned good wine list and they just don’t.  If I’m buying off a restaurant list then I’m not looking for anything fancy but at £29 a bottle the Costiere de Nimes was a little too young and lacking in punch or depth. It didn’t even have enough tannin or acidity to promise more in the future. Would be a tenner retail and wouldn’t be worth that. 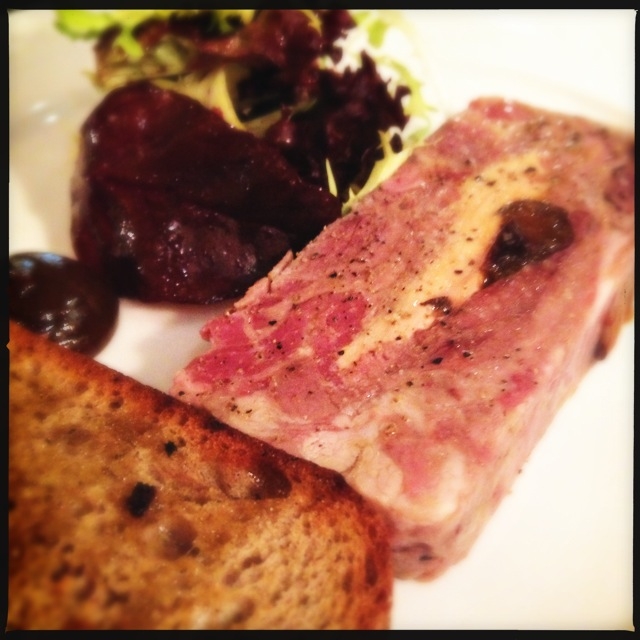 Taking a look at their sparkling offerings and other than a cider the cheapest sparkling is a “Vincent Gaudron ‘Vouvray Extra Dry’ non vintage” at £9 a glass or a whopping £52 a bottle. I wanted to find out a bit more about this sparkling “NV” Vouvray that is worth charging more than most house champagnes on London wine lists and this is where I came a cropper. There is a Domaine Sylvain Gaudron and there is a Monsieur Vincent Raimbaut who both produce named vintage year sparkling Vouvrays that retail at around £10 – 13 a bottle. There is also one Mr Vincent Gaudron who is manager/trainer of Limoges Football Club who is nothing, to the best of Google’s knowledge to do with winemaking. It’s also the case that the vast majority of sparkling Vouvray wines do give a vintage year, it is for the most part only those at the very cheapest end of the spectrum (Under £10 retail) that are listed as NV. So I remain completely unsure what you would be getting for your £52 at Little Social and think I would want to before splashing that kind of cash. 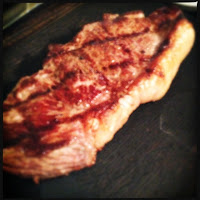 We started by sharing a pig’s head and foie gras terrine served with toasted sourdough bread and a prune and green tea relish. This was really delicious, a generous sized portion and worth its circa £11. The pig’s head element was really meaty and flavoursome with a generous, thick vein of mi-cuit foie gras running through the centre as well as sweet prune.  The relish was tasty also although any green tea flavour struggled to make itself heard over the fruity prune. A good start.

Bavette- frites is £15 whilst sirloin is £26 and having tried both there is no contest. I actually found the bavette tastier and would have saved nine quid to boot. Good quality meat cooked beautifully. Don’t get me wrong the sirloin is also excellent but the bavette is so good its hard to justify the extra to myself for the sirloin. 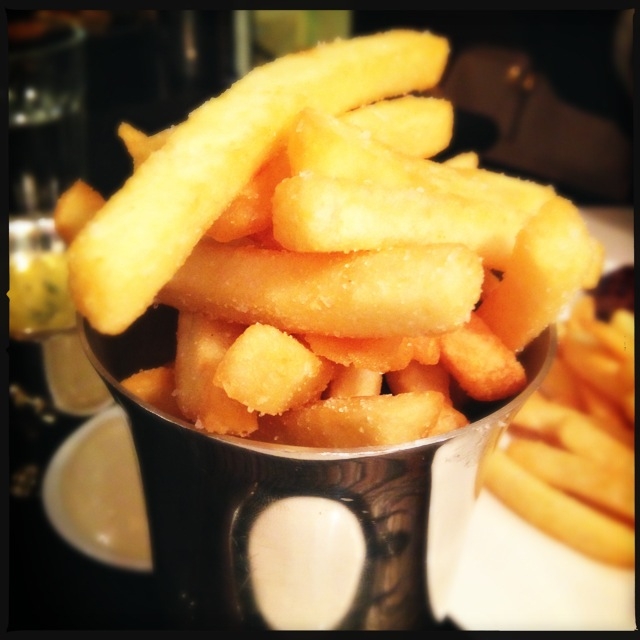 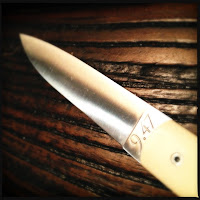 It was this at this point that we hit our only major stumbling block of the meal. The fries. Sure they look pretty enough, nice and crisp on the outside and fluffy on the inside but take a closer look at that picture and you’ll see just how much salt was on them. We tossed them to see if it was just on the top but no, throughout these were some very salty chips indeed. The maitre d’ did oblige by exchanging them but to be honest the new ones were pretty high on the salt scale too. In addition the house salad was incredibly salty, weird as there was no discernable dressing other than oil on there. 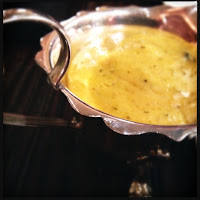 What does deserve a very honourable mention however is the bearnaise sauce. All steaks are offered with the choice of bearnaise or peppercorn sauce and I’m so glad we chose the former (although the latter may be excellent who knows?!)  A wonderfully rich, creamy bearnaise: gelatinous and gloopy enough for a big old blob to grab each chip and coat it in tarragon wonderfulness without dripping off. Superb stuff. 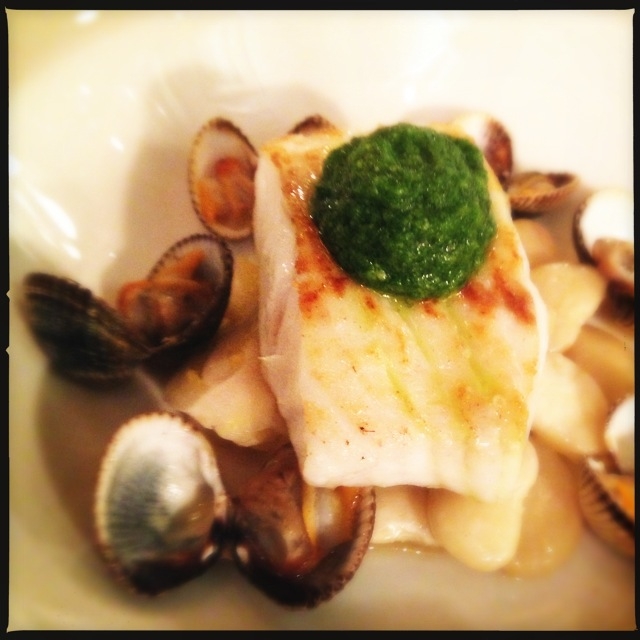 On the non meat side the a la carte offered a roast cod fillet served with cabbage pesto and clams popped on top of some borlotti beans and squid. Definitely the lighter option on the menu but cooked tremendously well (and not too much salt!)

The decor of Little Social is fabulous, very different from its light and airy, modern art smattered older sibling over the road. Here it is all about cosy and warm (which was utterly welcome on a snowy Saturday) Squished elbow to elbow with your neighbour on a leather banquette, warmed by a early 20th c style lamp, you felt as though you could have been in the dining carriage of a Belle Epoque steam train flying through the French countryside.  This sentiment was emphasised by the vintage Michelin roadmaps papering the wall down to the kitchens as well as the Art nouveau style French tourism posters. Clichéd? Maybe slightly, but lovely nonetheless. 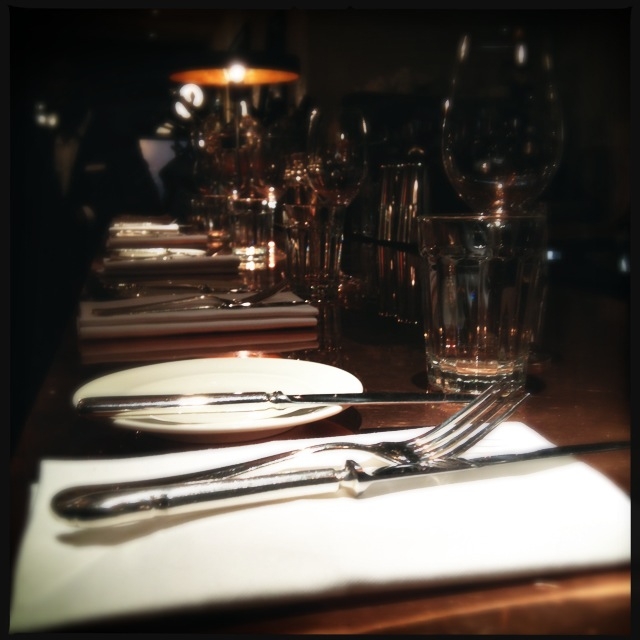 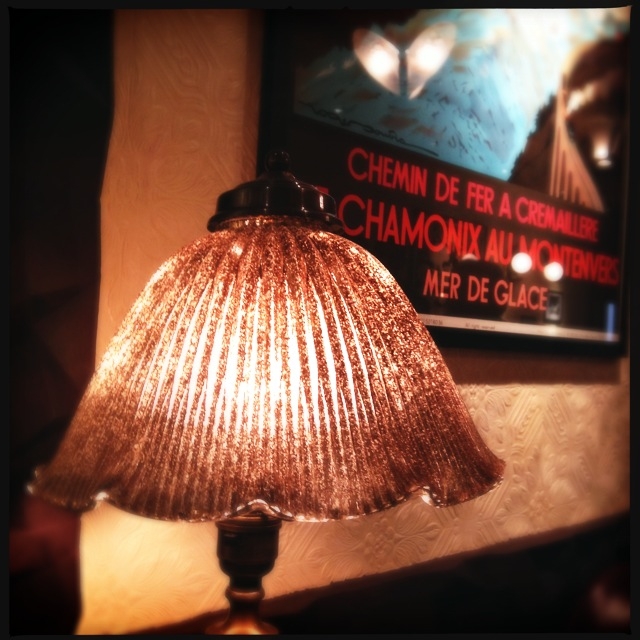 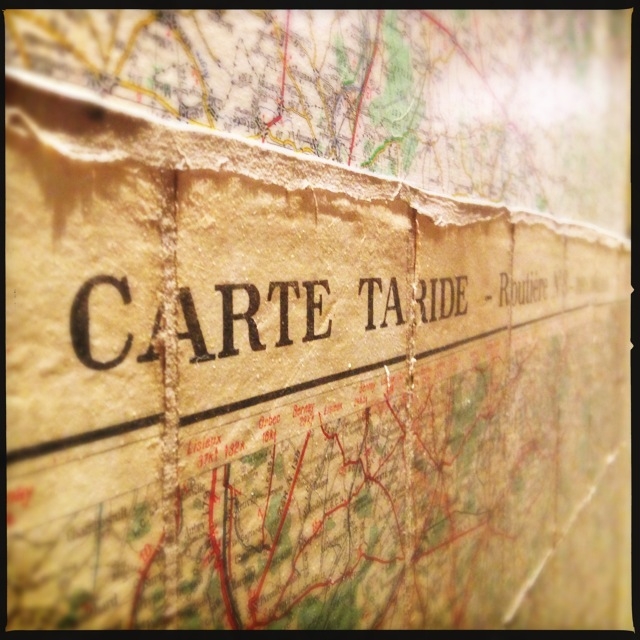 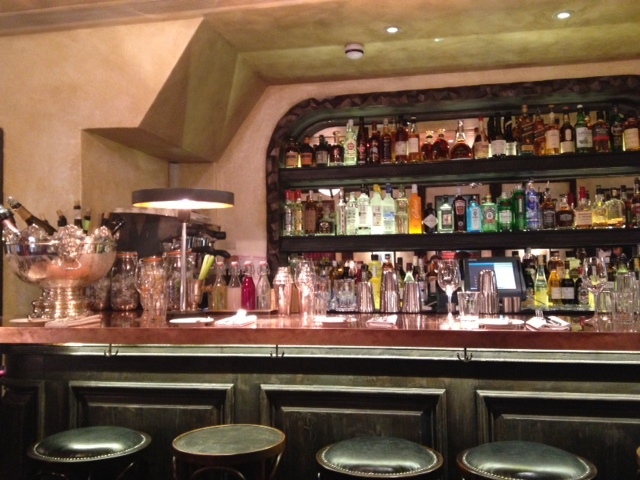 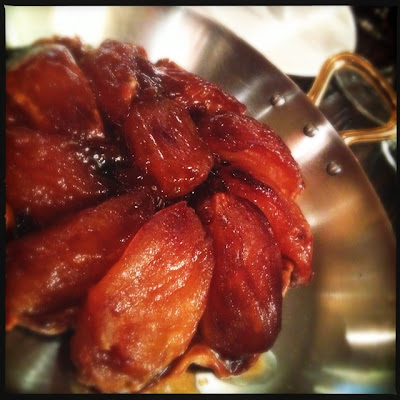 And so to dessert. I love tarte tatin. Apples so slowly roasted in rich, sticky, dark brown caramel that they are teetering on the verge of collapsing into a glorious compote. Topped off with buttery soft pastry just waiting to fall apart in your mouth. This tarte tatin was without any exaggeration THE most perfect specimen I have ever tasted outside of France and definitely the best one in the last decade. The day I visited it was listed on the specials to share for two but I hope beyond all hope that it makes it onto the permanent menu as this tarte would be reason alone enough to return. Served alongside it is a double cream ice cream that is more impactful in the idea of extreme extravagance it represents rather than in flavour. If you are someone that pours liberal amounts of cream on desserts then you would love it. 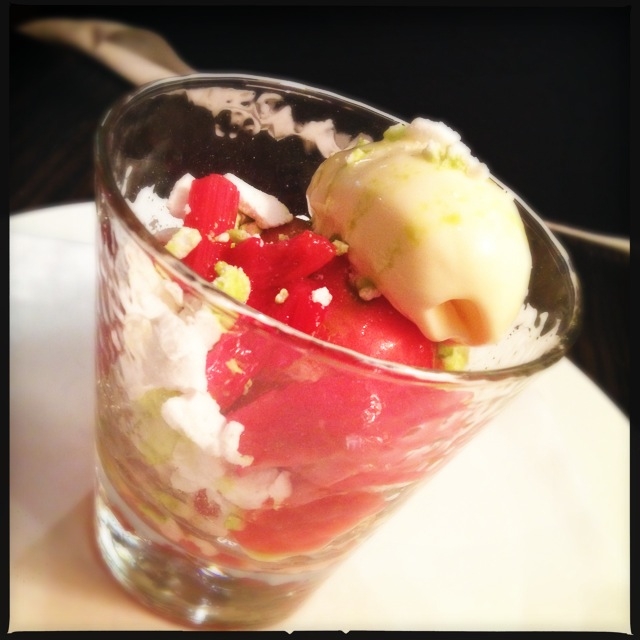 Presently seemingly ubiquitous on all London menus, rhubarb shows its face at Little Social also. This time in the form of a poached rhubarb Eton mess with rhubarb sorbet. The mouthful that I tried of this dessert was fab. Tangy sorbet just sweet enough not to make your face shiver squished in with crumbs of super sweet meringue. The rhubarb itself lurid pink and poached to perfection. I would normally avoid Eton mess due to it being very creamy but the cream was present only in the form of a scoop of very heavy clotted cream. A bright green mint oil drizzled over the dish made for both a welcome colour and flavour contrast.

To make up for the salty main course the sommelier very kindly brought us a glass of Riesling Spatlese. Just sweet enough to make it onto the dessert wine list whilst light with a gentle sparkle. Definitely the wine highlight of the meal and usually a reasonable £6.50 a glass.

Although it couldn’t be more different in style from Pollen Street Social, service is great in both and both have a clear place in London’s myriad of dining styles and options.


In short; sharpen up the drinks list on the price, accuracy and variety fronts, sort the salt levels and Little Social would make a welcome bolthole hidden away just off the shopping madness of weekend Regent Street. Somewhere, in these austere times, that would appear nice enough to clients whilst being sensible and not overly grandiose. That said its not cheap. Two and a bit course lunch came in at £210 for 3- mainly due to the cocktails but nonetheless, eek! yes, by taking a 2 course prix fixe lunch with one glass of house wine you could have come out with a bill of just over £30 with service but you really would have been stinting. Desserts are fanastic and perfect just the way they are. Got the makings of something very good indeed.