Now that there seems to be an occasional hint of sun in the sky (may I not jinx it by saying this) and the daffodils are poking through I decided to have a bit of a spring clean of the old drafts folder. Sure enough, tucked amongst the published posts I found a heap of places that for one reason or another never made it into a full on blog post. Not because they weren’t good by any means, more often becuase I got busy and never got round to the full write up. Or that the photos were rubbish and who doesn’t like a good photo? So here they are a brief memory dump of some of the more interesting meals I’ve eaten recently. For some reason most of them seem to feature French/European style bistros so we have a theme. 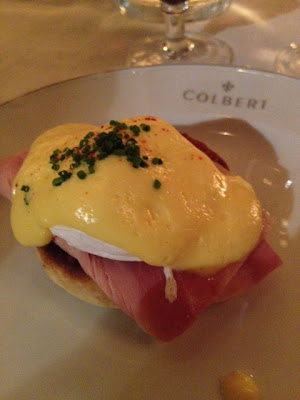 The unstoppable steam train success that is the Corbin/King duo strikes again? The most recent of the bunch (or should that be brunch) being Colbert, is located in the space that was Oriel in Sloane Square.

When Oriel closed its doors lots of stories did the rounds about its disappearance, the most widely reported being that the landlord the Earl of Cadogan went to lunch one day and found it so horrid he immediately refused to renew the lease on the basis that the location in prime time Sloane Square is such a good one that anything there will be a success and he at least wanted it to be good.

Arriving quite late on in the evening with no booking, we were more than happy to sit outside nursing a glass of red wine and watch the world go by until our table was ready. About half an hour later we were fetched and whisked through to the back room. The decor is like the other Rex restaurants in that it is designed to emulate the grand cafes of a time gone by and does this at Colbert with lots of old photos and French adverts. The number of covers in Colbert is quite deceptive due to the winding nature of the restaurant with different rooms but doesn’t have the giant feel of Zedel.

It might have been late at night but there are certain breakfast dishes that work at any time of day or night. Eggs benedict is one of them and also, in my experience offers a reliable yardstick to compare restaurants by. H and I therefore just had to share a small portion as a starter. Excellent quality hand carved ham – tick, decent quality hollandaise coating the runny poached egg- tick. No complaints.

I followed it up with steak. Decent meat, nicely executed, decent chips. not Hawksmoor but perfectly pleasant. H went for the cassoulet and I have to admit to having been a bit of a green eyed monster as it was seriously fab. There are few things gastronomically speaking that can be more fulfilling on a chilly rainy night than a good, old fashioned cassoulet. Especially one that contains not only Toulouse sausage but also confit duck.

On their website, Rex restaurants describe Colbert as a “neighbourhood cafe” which I think is doing it a disservice when Zedel is described as a brasserie- this is so much more than a cafe serving a versatile menu, a decent drinks list and would also be very much worth travelling for. I very much hope that Lord Cadogan continues to enjoy the food at Colbert as I would hate to see it disappear

Would I go back? Definitely. I’m keen to try the “Croque Grand Monsieur” which is essentially a pimped up cheese and ham toastie replacing the normal cheese with comte and the ham with bayonne ham. Bring it on!

Speaking of Corbin and King, the early part of this year also held a long overdue visit to Piccadilly stalwart, The Wolseley. Meeting my parents from a charity event, I came face to face with my father accompanied by a large walking box hovering somewhere just above what appeared to be my mother’s legs. It transpired that she had won an unknown star prize in some raffle or tombola type affair which was presented in a giant box. It was therefore with excellent grace and aplomb that the doorman and the maitre d’ of the Wolesely greeted our arrival and said cumbersome box was whisked away for storage without even a hint of a raise of an eyebrow. We were whisked to our table in the centre of the main floor giving us excellent people watching potential over our fellow diners.

I’ve since been told by a friend that Corbyn and King restaurants have very distinct seating hierarchies (this was also reinforced by Marina O’Loughlin’s trip to The Delaunay). At the time I had no idea but it seems we lucked out and were sat in what those in the know consider as prime time seats – maybe it had something to do with the box incident, keep ’em where we can see ’em! We were right next to fabulous actress Gina McKee so maybe there’s a grain of truth in it. Anyroads, its a good parent dinner place. Nothing too weird or foreign, not too dark with no obtrusive music to muster frowns.

A significant part of the short wait for our food to arrive was spent taking in the architecture and guessing at what its history had been. Parent 1 guessed bank and parent 2 car showroom;  a brief foray into the world of Google and hey presto, you’re both right!

I started with the seared scallops, jerusalem artichoke puree and hazelnut oil. Very tasty, pretty and well executed but at £16.50 for a starter portion the serving felt perhaps a little on the stingy side. In contrast Severn & Wye Valley smoked salmon with soda bread was a super generous portion, a whole large dinner plate covered in plain salmon. Not complex perhaps but delicious in its quality and simplicity.

Peppered beef fillet with brandy cream sauce was very nice but also very peppery leaving me happy but kind of envious of my Dad’s rib-eye steak which was apparently excellent.

The wine list is not going to be winning any prizes any time soon for either its breadth of choice or its originality but it is adequate.

A coffee eclair for dessert was everything that you would expect from classical European patisserie. Stuffed with cream and a bit fat coffee chocolate worm of icing glistening on the top of the lightest of choux pastries. It lasted about 2 minutes. Max.

Service is good, clearly the staff are very busy which doesn’t lend itself to a feeling of a relaxed dining experience but part of the enduring appeal of the Wolseley is its buzzy, classic cafe feel. This is somewhere that people come to see and be seen.  Arguably they have gone a little bit commercial offering Wolseley branded oils and rather pricey pepper grinders for sale on their website but I suppose its not a crime.

I’m terrifically keen to return for breakfast one day although I expect that they will be just as run off their feet then as at any other time of the day. Still by far and away the flagship of the group’s collection, The Wolseley looks likely to carry on forever.

Various internet and magazine coverage of Soif often describes the style of dishes on offer as ‘tapas’. Call me picky or annoying (and you wouldn’t be the first) but I have a marked dislike for any ‘tapas’ that isn’t Spanish as it invariably disappoints me. Using the word “tapas” feels completely wrong to describe somewhere that is so completely and utterly Gallic. Everything from the decor of the restaurant to the accent of the ridiculously good looking waiter oozes Frenchness. You get the feeling that only the pesky smoking ban prevents the middle aged Frenchman sat reading a paper at the bar (Le Monde, natch) from exhaling a rising curl of blue Gauloise smoke.

A and I opted for the special, Nduja, a dish of spiced, minced sausage blended with chilli and served with bread with ricotta and rosemary. A small plateful of padron peppers were a good addition at £3.50. Little chargrilled bites of green pepper were crisp with a salt crust, and would have been perhaps too much on their own but were great with the nduja and some slices of saucisse seche.

We were warned several times by various members of staff that the Nduja was very spicy, we were even told a tale of the very-good-looking-waiter crying after eating it (allegedly not through pure joy). I’m not known for my tolerance of all things spicy so it was bit of a gamble. On the Indian scale of spice, dopiaza is my limit. The one benefit of this “small dish” approach to serving food (nope, still obstinately not using ‘tapas’) is that you can risk ordering something you might not usually try, or suspect you might not like and its not going to wreck the meal if it turns out to be an inedible dud. Luckily, however, on this occasion our gamble paid off and, far from being a dud, the nduja was a little taste bomb of flavour and spice.

For a place who’s name means “thirsty” Soif live up to their moniker with a super extensive wine list, in fact ‘list’ is a bit of a misnomer I’d go with ‘book’. Soif do place a lot of emphasis on natural/bio wines which the cynic in me finds rather annoying but there are plenty of good value and unusual “normal” wines to choose from.

We shared a whole roast quail with salsa romesca for our main course. We accompanied it with a portion of asparagus, duck egg and parmesan wihch was simple but well put together.   The menu changes on a daily basis so I’m keen to go back and give it another go to try out some of the other options. Revisiting their website for a bit of fact checking I got sucked into today’s menu and I would definitely be eating whole dressed devon crab and confit duck if I was there today.

The older that I get, the more savoury that my tastes seem to become however when it came to the dessert list I was torn. Two of my all time favourites were right there for the taking. Almond and pear tarte or chocolate in the from of a pot au chocolat? Weighing it up we went for the only sensible option in such very trying circumstances and ordered both.

Almond and pear tart was held together by a buttery, crumby pastry and the almond frangipane not too dry, always a risk. Chocolate pot was supremely chocolatey, utterly smooth and nothing short of delicious.

PS did I mention that the waiter was very good looking?