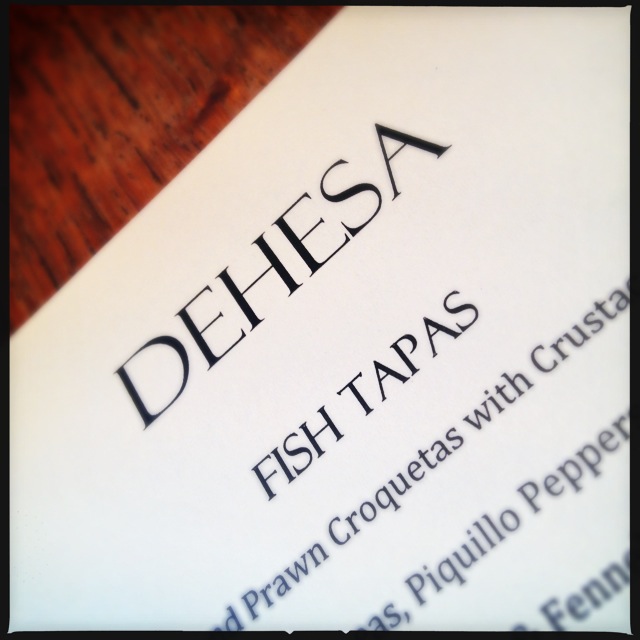 How Dehesa has, until now, completely missed my radar I’m not sure as it is so completely and utterly ‘me’. Apart from anything else, it’s been there FIVE years for goodness sake. I’ve been to sister restaurant Opera Tavern and loved it, I adore Spanish tapas and its not exactly rare that I’m out and about around Soho so this counts as a major oversight. Anyway, feeble excuses aside, it was brand new to me. 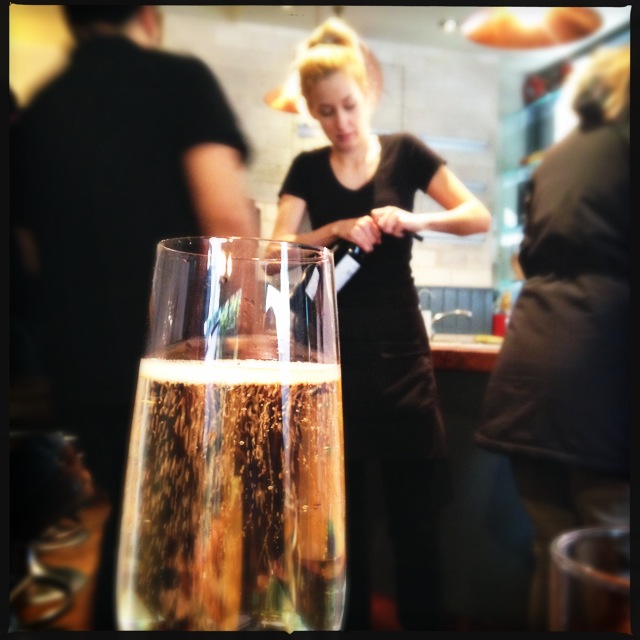 I woke up on my birthday knowing that if only one thing were to happen that day (other than getting another year older) then it had to be that I would eat croquetas. There is just something about that crispy breaded outer being the last bastion standing between me and a hot, oozy centre that gets me all of a tizz every time. Cue Google quest for decent Spanish tapas around the Oxford Circus area.  It ended up being a toss up between Dehesa and Copito so if anyone’s been to Copito and had a good time, do share! 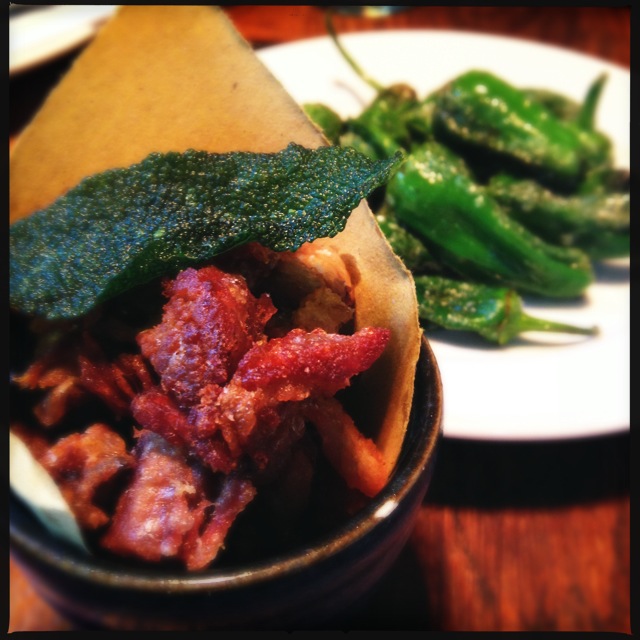 So back to Dehesa. I have to admit to having been a weeny bit suspicious of combined Italian/ Spanish tapas but the menu is just too delicious to hold that thought for too long. I was also completely wrong; Spanish and Italian together can be a wonderful thing. We attacked the bar snack side of the menu first for something to nibble on whilst contemplating the altogether more detailed tapas options over a glass of cava. 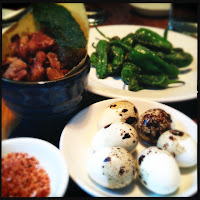 Both the pork and chorizo terrine and the chorizo & guindilla pate had sold out so I will have to go back for those another day.

First to arrive were padron peppers, quails eggs and pork rillions. Sitting somewhere on the pork spectrum between scratchings and well done pork belly,  rillions are meaty little morsels that just oooze terroir. I am fully aware of just how pretentious that last sentence sounds but its true, the flesh is so flavoursome that you can just picture happy pigs running around the countryside snuffling out acorns. Padron peppers were lightly charred to release the pungent bittersweet flavour and salted to a tang.  Quail’s eggs were, well, quail’s eggs albeit left in half a shell which, whilst pretty, was also a bit fiddly.  Special mention has to go to the smoked paprika salt for dipping the eggs. Simple, inspired and sooo being copied next time I have friends over. 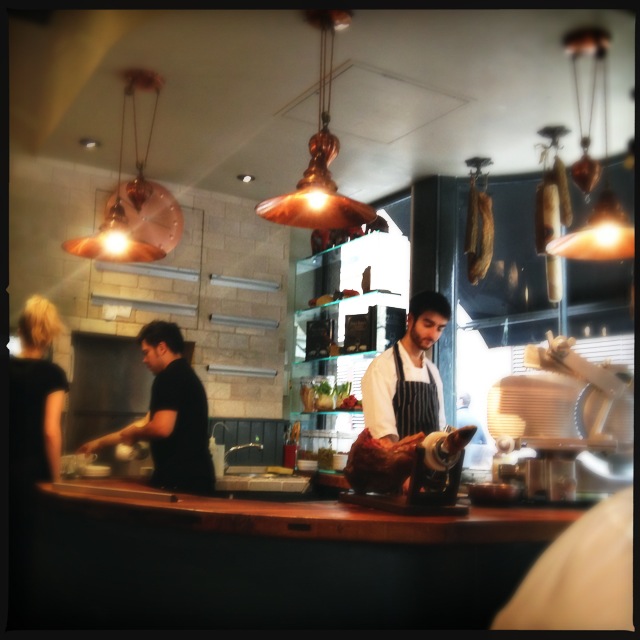 Dehesa itself is a laid back but bustling kinda place, lots of high chairs at long tables and some comfy chairs at lower round tables, cleverly built into the round windows so that you have excellent opportunities for people watching both inside and out. On one side the bar staff are doling out the wine or mixing up drinks whilst in the far corner is the fun bit; a huge pata negra ham sits waiting for the chef to carve off little salty slices on a preparation area next to the dumb waiter so you can see all the dishes appearing as if by magic from the kitchen. 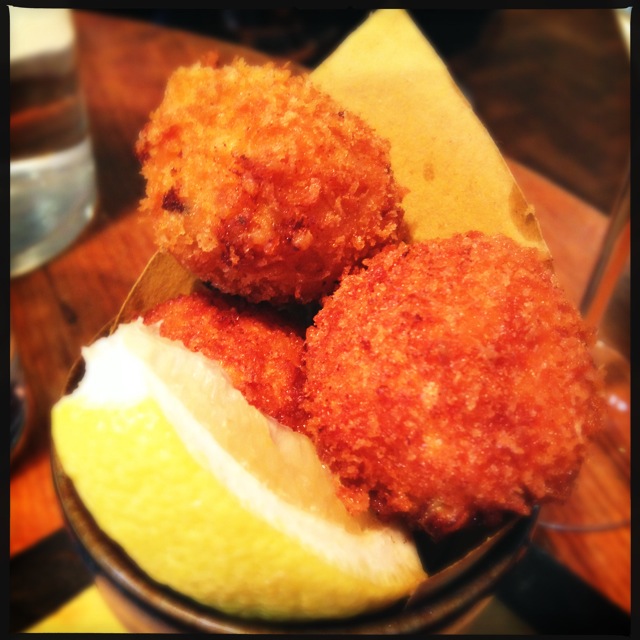 The croquetas on this particular occasion were of the cornish crab and prawn variety served with a crustacean aioli. The aioli had amazing depth of flavour, like a much reduced lobster bisque in mayonnaise form. The velvety seafood sauce was complemented by a dash of saffron flavour binding the crab meat in the croqueta itself. If I hadn’t had a dinner ahead of me that evening I could have sat there all afternoon eating plate after plate washed down by endless cava.

Grilled chorizo with smoked aubergine puree wasn’t the most aesthetically pleasing dish to come out from the kitchen but it was bursting with flavour, the mellow smokiness of the roast aubergine cuddling up to the paprika packed chorizo in a glorious comfort food hug. 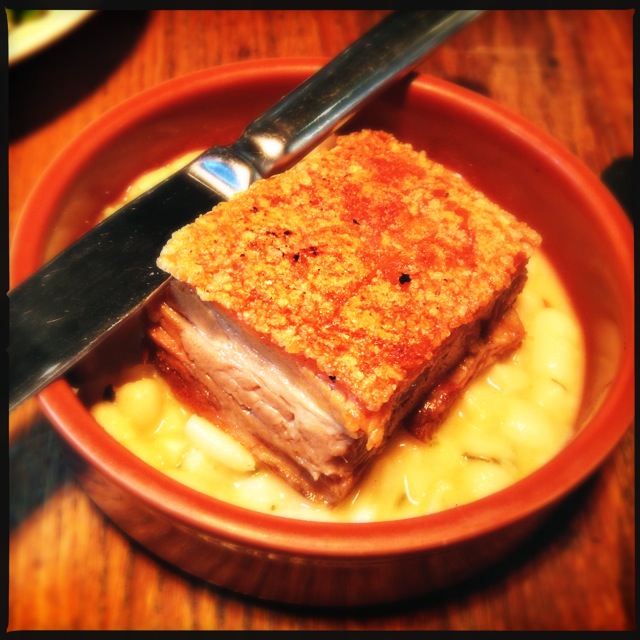 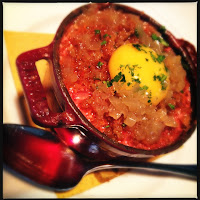 A dish of pork belly and rosemary scented cannellini beans was well executed with a nice amount of crunch on the pork skin. For me it was very rich and greasy (not a criticism when it comes to pork belly….) and whilst the cannellini beans were nice and very definitely of the rosemary variety,  I would have liked something to cut that grease just a little bit more. Last of all came the beetroot and taleggio gratin with egg, migas and truffle dressing; bright pink in colour and tangy with powerful taleggio. I hope I’m not showing my ignorance in admitting that I did have to google “migas” but it apparently means “crumbs”. As you can see below, it seemed to be more like a caramelised pickled onion but whatever it was I liked it, adding bite to the very creamy, rich gratin.   Not the most super truffly dish I’ve ever tasted but pretty darn good nonetheless.

Other dishes that imminently need to be a part of my life include the courgette flowers with Monte Enebro and honey, the jamon iberico de bellota with Ermesenda toast and the octopus a la plancha with chickpeas, piquillo peppers, spinach and gremolata. I defy anyone other than the most hardened vegan to read that sentence without admitting to even just a hint of salivation.

Would I go back? Definitely. Its not somewhere you’d go for a special occasion but its great for a catch up over a decent bottle of wine with a friend or a pitstop when shopping. Best of all you can also reserve some of the tables in advance thereby avoiding the dreaded Soho curse. 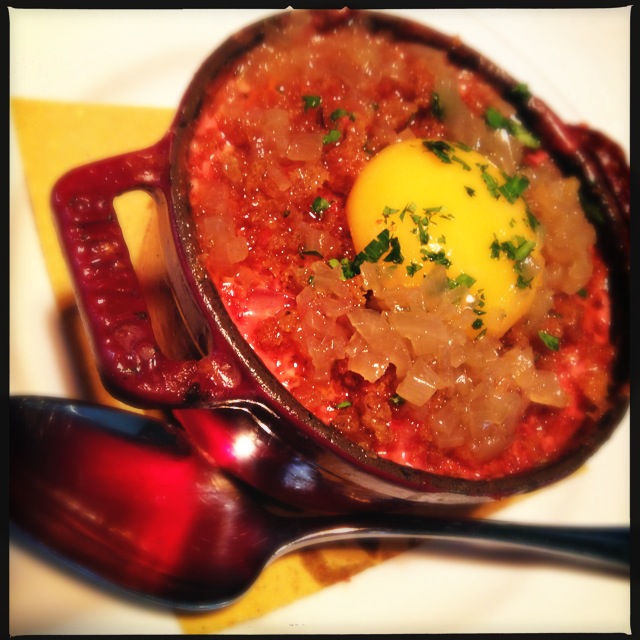