Continuing last week’s spring clean and the series of bistro type venues I’ve failed spectacularly to blog until now, here are some more. I’ve noticed a correlation of reason for not having blogged earlier; bistros tend to be quite dark which leads to rubbish photos. Prepare yourselves for a series of hideous overly yellow and slightly grainy images. Sorry! 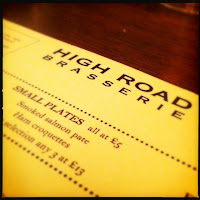 This was a work outing which always makes it harder to keep notes, even on a mobile you look like you’re rudely texting away. I felt it was worth a mention though as the meal we had was actually rather nice in a plain simple, traditional-brasserie-food-done-well kind of vein. Between us we had a brilliantly ooozy, cheesy and horrifically calorific French onion soup which almost made me regret my choice but not quite, some scallops with pea shoots (a touch overdone but not so far into the rubber category that they had reached inedible) the highlight starter for me was the twice baked gruyere soufflé- light and fluffy with a deep cheesy flavour and nice crunchy outer. Served with a chive butter sauce in a little jug on the side, at £7 it was reasonable value. 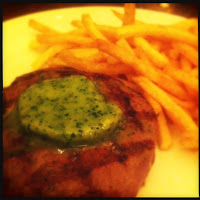 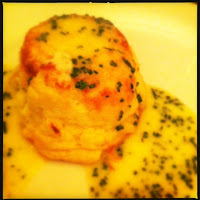 Meat is all sourced from well known West London butcher, Macken Bros so is of excellent quality. The garlic butter served on top of the steak was more herb than garlic for my tastes but over the years I seem to have become immune to levels of garlic in combination with cow so its probably just fine.

In all honesty you’re probably not going to travel across London to dine here, especially not on the basis of their rather underwhelming website. That said it’s a definite contender as a good quality Chiswick meal that can compete alongside Sam’s Brasserie on the nights when you can’t afford nearby La Trompette. Does what it says on the tin. Doesn’t over promise and doesn’t over deliver but is just good.

Hidden away just off Sloane Street on what, at first glance, looks like a residential street, Le Cercle is just a climb down a staircase into a cavernous basement restaurant. 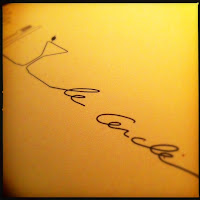 The menu is a combination of classical French with what can, at best, be called experimental additions. Despite my predilection for anything porcine I have to admit that “crispy pork and melting tuna” sounds like a pretty horrific concoction and not one I’d be willing to spend £6.00 on to try and prove myself wrong. Duck “chocobar” sounds very interesting and could either be a triumph or a disaster and nothing in between but didn’t make the cut on this occasion. What did, however was the mini duck burger from the ‘grignotages’ list which, despite being “mini” was definitely worth its £4.50.  A warm brioche bun gave way to crunchy lettuce and a rich well seasoned duck finish.  I’d like to see a full size one on the main course list. A “winter salad” was essentially veg that you would eat with a roast, but raw. The dressing added to it was nice but it struck me as an undercooked side dish rather than a dish in itself. 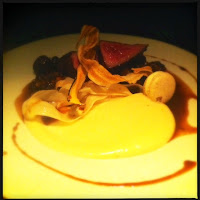 There is a definite leaning towards bringing the sweet into what should really be savoury dishes. Sometimes this works other times it doesn’t.  An example of when it doesn’t is the juniper macaron served with the braised and seared venison & vanilla oil mash. The venison was a beautiful piece of meat cooked wonderfully well but it was totally overpowered by dessert- sweet mash, the vanilla reminding me of a creme patissiere, then topped off with a juniper macaron. It was a nice macaron and would have been welcomed with open arms as a petit four but with roast venison? No thanks.  Duck creme brulee with lemon pearls and cardamom crust was another one that sounded more like it belonged at the end of a menu than in the middle. 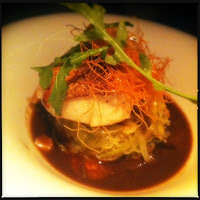 I have to admit that I wasn’t paying full attention to my dining companion’s main course. I *think* it was a sea bass with roast choucroute and spiced wine sauce but I’m not 100% sure. He seemed quite pleased with it though and it did look pretty on the plate.

Melting middle chocolate pudding and a citron tart were both very well made and delicious leaving the meal on a definite high. The chef clearly has a sweet tooth and is most at home with excellent desserts.

Charging us for an entire bottle of dessert wine instead of a glass was, I am absolutely sure, just an accidental oversight but unfortunately one that we only picked up on once the transaction had gone through and I understand the resulting refund took a couple of weeks which is unfortunate.

I did try to go back a couple of weeks later with my parents and booked a 9pm table. I got a phone call a couple of days before from the manager telling me that I was the only table booked in that evening and “although we’d happily open perhaps could I think of ….? Would I like to possibly not….? Maybe it would be a bit quiet……. “.  So what you’re trying to say is that you don’t want to cancel my table but would quite like me to cancel? Fair enough. We ended up at the Wolseley. Good swap.


I have to admit I’ve gone off Le Cercle somewhat since they subsquently sent me an email newsletter in which they proudly boasted of their appearance in the first episode of the new series of Made in Chelsea in the same breath as Pippa Middleton having name checked them somewhere. Not sure these are the sort of credentials that a restaurant linked to Club Gascon should look for but hey ho….

The atmosphere in the restaurant is relaxed and the service pretty good. Prices are very reasonable for the style of restaurant and the location in Knightsbridge/Chelsea. It’s not going to knock your socks off but, provided you’re not ultra fussy, it won’t disappoint. All in all a nice evening out but mainly down to the company rather than the food and restaurant experience and with a plethora of other great places to try I probably won’t be back. I see that they are offering various voucher deals or cut price offers on certain websites and it would be worth a try on a deal but I wouldn’t pay full price for it again.