I love dim sum. Juggling slippery har gau with chopsticks, peeling opening bright white springy char sui bao buns to reveal the sticky pork inside, its the stuff dreams are made of. In short I absolutely adore it but being as most Chinese restaurants only serve it during the day when I’m usually squirrelled away in an office somewhere overlooking the M4 I don’t often get to eat it. Not many places of any note serve the decent stuff in the evening and last year’s debacle that was Ping Pong has made me very wary indeed.  That said J&D were visiting from Liverpool with a craving for dim sum which had to be sated. Cue an outing to Yauatcha.

Located amongst the fabric shops and farmer’s market on the corner of Berwick and Broadwick in prime time Soho, Yauatcha does stand out somewhat from its surroundings like a bright blue fish tank.  Once inside the building is divided into two, the upstairs being a more casual tearoom with an absolutely gorgeous patisserie display. Heading down some neon blue lit stairs into the dark cavernous basement beneath feels a little bit Star Trek at first. The downstairs dining room resembles the flotation pool in a posh spa; twinkling fairy lights in the ceiling and tanks of tropical fish around the bar with flickering faux candles embedded in the gold tiled walls. The early evening chill out dance music adds to this feeling. Nothing wrong with this per se, very relaxing indeed but just a little um… unusual.  As the evening went on the music went uptempo to become slightly more discoey (is that even a word?) – well you know what I mean.

I have a bit of a love/hate relationship with Alan Yau’s restaurants generally. Wagamama clearly has a place in the world of chain, fast food dining and was pioneering when it first emerged but I never seem to find myself eating there these days. Sake no Hana was a bit of a disaster from start to finish (tried in my pre blog days otherwise it would have been a corker) whereas Hakkasan I found very pleasant but clearly in a completely different league to the others in the Yau stable. Despite having been sold in 2008, Yauatcha still bears the hallmarks of the Yau dynasty with its contemporary but classic spin on oriental cuisine. 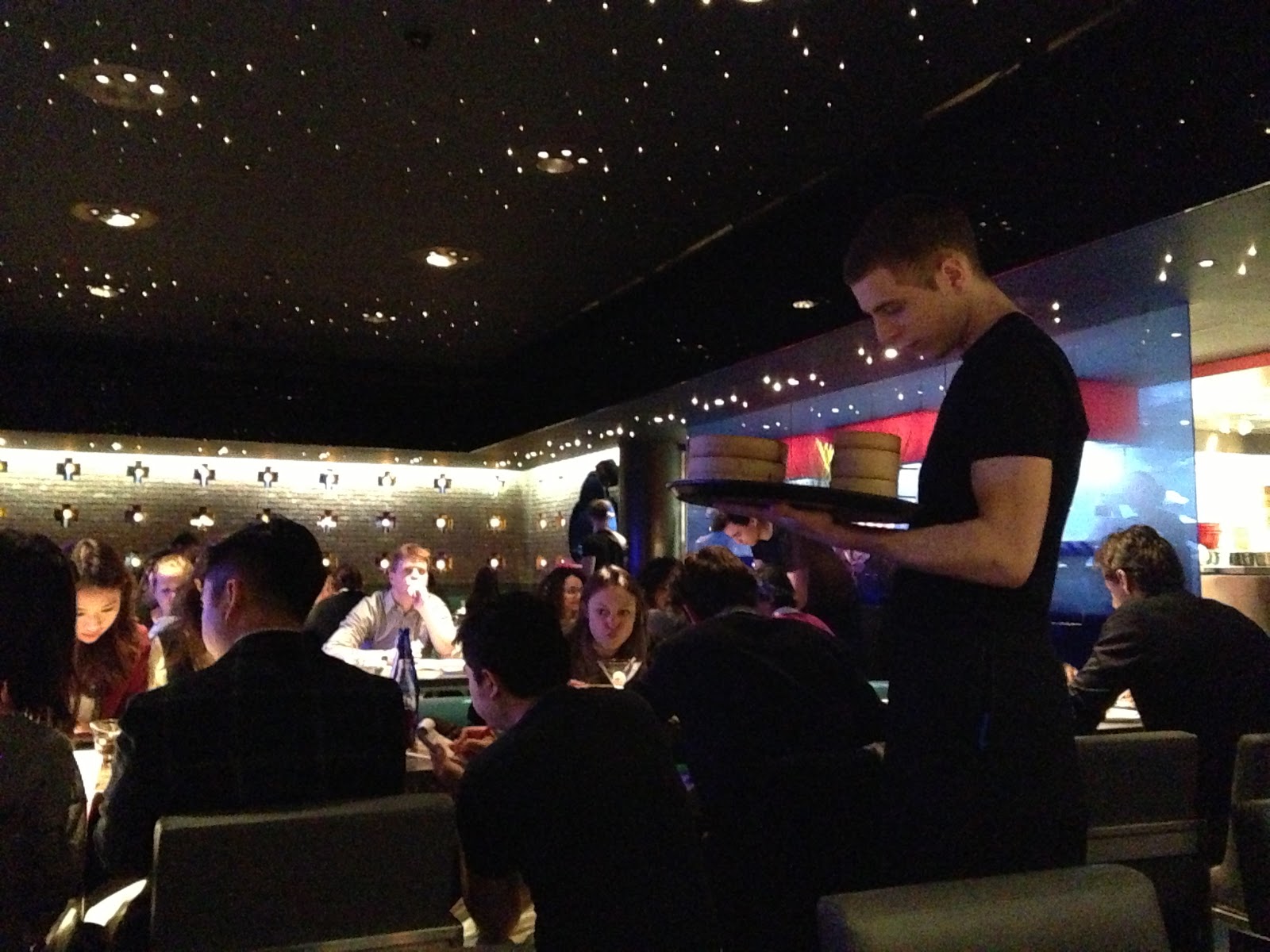 The cocktail list is pretty varied and versatile with various options leaping out at me. Between us we sampled a few my favourite of which was the Golden Aster martini conjured together from bourbon, sweet vermouth, aperol and lemon chilli syrup. Warm and spicy but just light enough to still be refreshing.

The chilli martini, lychee martini and the citrus martini (gin, vodka, limoncello, passionfruit, grapefruit & orange juice) all also hit the spot and there were plenty of other options on the list I’d be keen to try on a return fixture.

At £9.80 each cocktails are pretty reasonable compared to many other Soho hangouts and complex enough to feel like they have earned their keep. 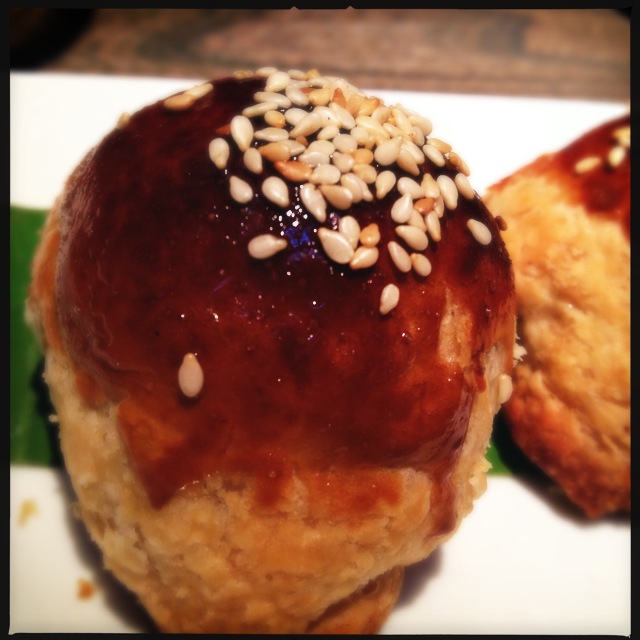 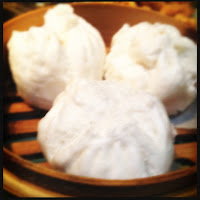 Venison puffs were first to step up to the plate encased with buttery, sesame topped flaky pastry concealing a hot, gelatinous gravy soaked gloop of sweet seasoned tender venison. I had thought at first that they might be overly dry due to the amount of pastry but in hindsight they had done well to keep the pastry so crunchy with the amount of lovely filling.

Char sui buns were equally gorgeous in their filling and generous too. Just like the ones that you get everywhere else but kind of ‘supercharged’!

Crispy duck rolls were big fat cylinders absolutely stuffed to the gills with shredded duck meat, thin cucumber and spring onion strips snug inside a crispy but not overly greasy casing. By far and away the best duck rolls I’ve ever had. The hoi sin sauce was, well, like normal hoi sin sauce but complaints there. 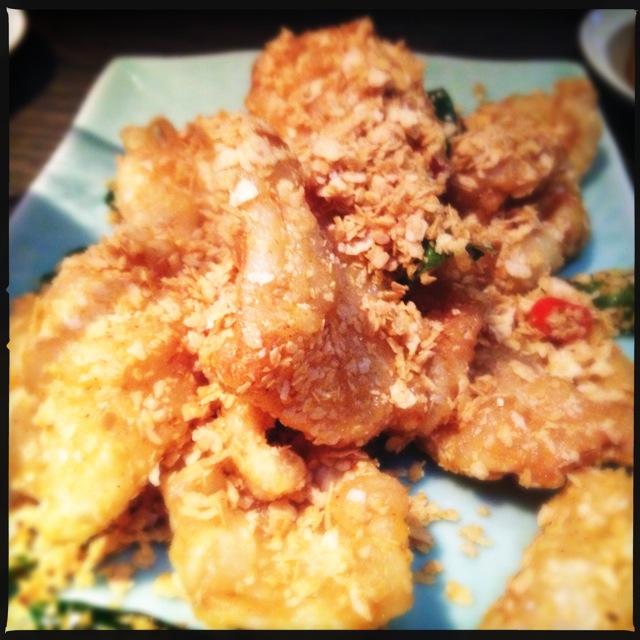 Chilli squid with oatmeal was springy without being rubbery whilst maintaining a crunch on the outside. Yes, oatmeal might be a rather unusual ingredient for chilli squid and could be classed as a cheating a bit were you to be of a grouchy disposition but it was very good. Just enough chilli heat to tickle your taste buds and salty enough to get the juices flowing without having you reaching for the water

Almond fish cakes were unusual, the filling was almost quite rubbery in texture like thai fish cakes but then coated in  crunchy almond outer casing before being fried. They had a lovely fragrant flavour further enhanced by a light but tangy orange blossom type dipping sauce. 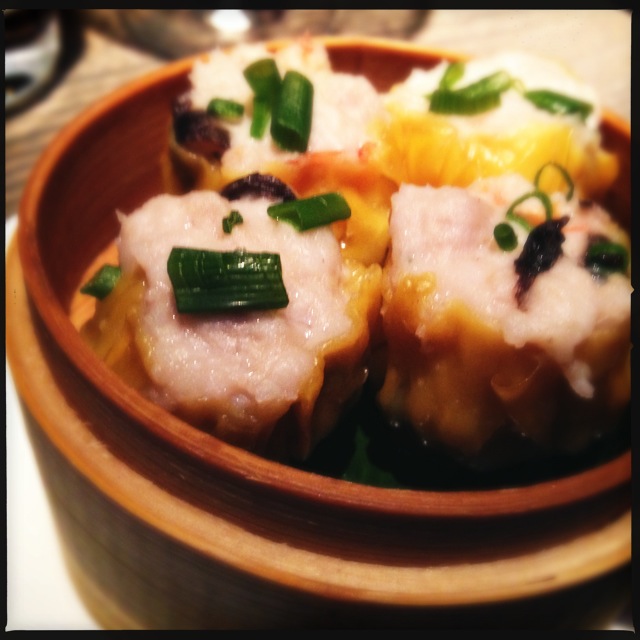 Pork and prawn shui mai are hardly innovative but this rendition of an old favourite was extremely well executed. Too many shui mai I have had recently have an overly meaty flavour to them but these were perfectly balanced between prawn and pork and well seasoned.

This brings me on to one of the criticisms levelled at Yauatcha out there in cyberspace which is that many of the dim sum dishes are nothing new or imaginative but then again what would dim sum be without har gau, shui mai or char sui bao? If anything it is harder to impress with your version of something classic than it is to impress with something new.

Next time I’m definitely going to be trying the lobster dumpling with tobiko caviar and the blue swimmer crab shui mai, I got too full to order them this time unfortunately! 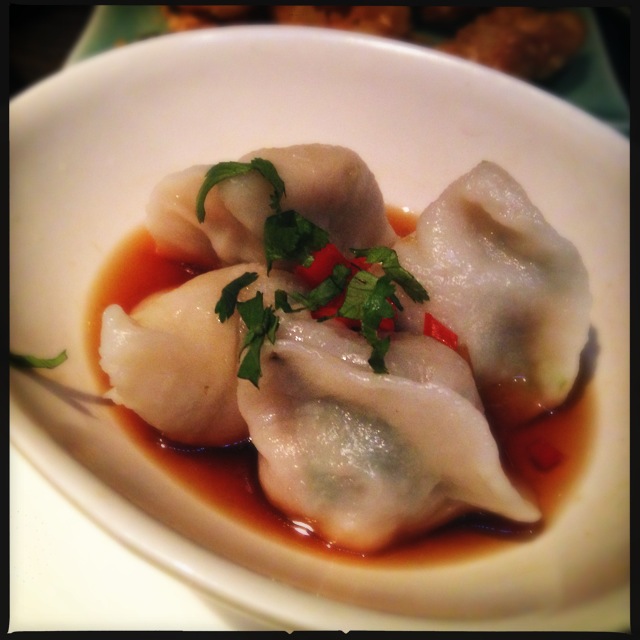 Poached peking spicy chicken dumplings were little sticky pockets of flavour, plenty of coriander then a warm surge of spice in the accompanying broth.

One of the indisputable stars of the show was the platter of jasmine tea smoked ribs, a main course option at around £12. Although covered in a very sweet and sticky (but utterly lovely) barbecue sauce, the soft smoky tea flavour of the meat itself was clearly distinguishable.

Mongolian venison with red pepper, potato and onion in a thick butter and black pepper sauce was possibly the most tender venison I have ever eaten. At one point we were left scraping the sauce off just to check it was slices of meat and not mince patties underneath it was that soft. Gentle game flavour just coming through the sweet but peppery sauce. 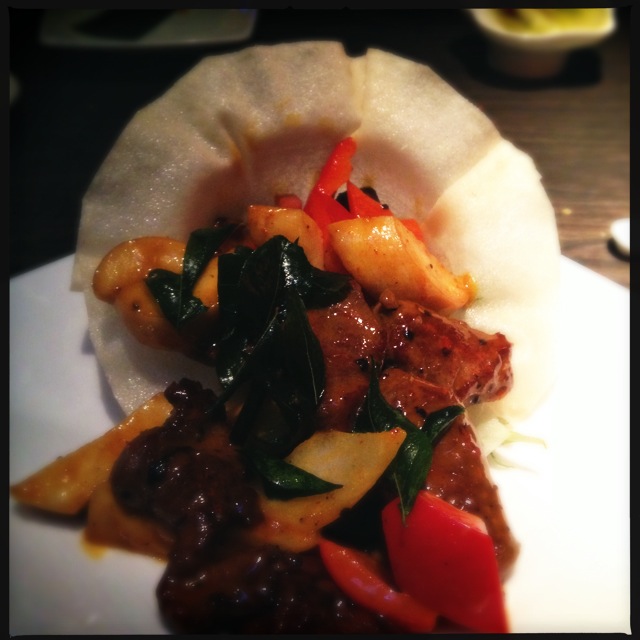 Every bite that we took whilst at Yauatcha was absolutely beyond criticism.

So, onto the cost of this escapade. I really, really dislike the practice of many Parisian restaurants (and a fair dose of New York ones too) of not putting any prices on their website. This insistence of sharing a menu but no costs is one that smacks of arrogance and a sense of “if you have to ask the price you can’t afford us“. It’s rare that this happens in London but I was disappointed to see that Yauatcha’s website is one of those unforgiving places, this implied to me that I was in for an exercise in rampant wallet bashing.  Totally unnecessarily so as well since prices, although higher than your average Gerard Street eaterie, are not that bad. Most dim sum dishes are around £7 and desserts around £8. Considering I called at 3pm for a 6.30pm table on a Friday night Yauatcha are not super-fully-booked, maybe not being so recalcitrant on the published price front might attract more punters?

We ordered at least 7 dim sum dishes, a couple of mains and multiple cocktails and left stuffed to the gills and a bill of £140 between three; less than I’ve paid per head in Ping Pong in the days before it turned into Pong Pong.

The big remaining question is whether it deserves that Michelin star? The food is undoubtedly an excellent example of its kind, definitely a notch above most other dim sum places. That said, I don’t think it is as good an experience overall as Hakkasan and is not what I would traditionally categorise as a Michelin starred one.  Chopsticks are snap-yourself wooden jobs and napkins are paper and presentation is nothing incredible. It’s always hard to make a comparison across different cuisines, but the type of experience that you get at somewhere like Chez Bruce, Dinner by HB, Joel Robuchon or any number of other “fine dining” (I hate that phrase!) venues leaves you feeling much more special than you do here.

Quite a few people online had pilloried the service at Yauatcha referring to it variously as ‘dreadful’and ‘cold’ but this wasn’t my experience. Ok, it wasn’t top notch service wise (I did have to chase for soy sauce and some other bits) but it was far from the bad experience I had steeled myself for.

So a couple of niggles around the overall visit but one thing I couldn’t fault at all was the food and ultimately isn’t that what we’re there for? Would I go again? Yes definitely. Excellent for pre theatre or casual catching up with friends but probably not what you’re looking for on a romantic night out or special dinner. Having missed out on dessert I can’t wait to go back soon and sample the delights of the tea room.