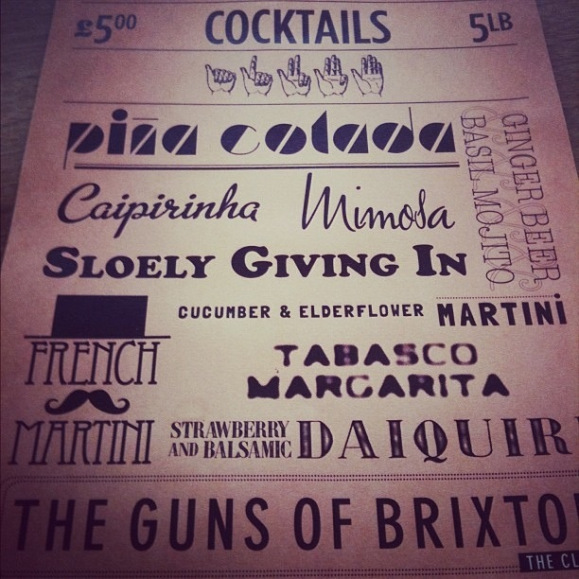 If I was being generous I would start by saying that I suppose Seven isn’t technically a restaurant. But I’m not feeling generous. Far from it, in fact, because sitting down at the computer and recollecting my visit to Seven has made me cross. Seven sits in the now well renowned Market Arcade in Brixton and  does an excellent impression of pretending to be a purveyor of food in the form of Spanish style tapas.

Rammed to bursting on an unseasonably chilly Friday night, customers were put off neither by the cold, the dark room, nor the elbow to elbow crowds huddled around the ubiquitous mismatching furniture and dangly industrial lights. The upstairs is given over to local artists resulting in interesting decor but you couldn’t see it even if you wanted to as the place was so crushed.

After wriggling to the bar we ordered various of French Martini, strawberry balsamic daquiri and Sloely Giving In. The first and last were both well made and pretty tasty and I could happily spend a summer night whiling away the hours getting steadily squiffier on five pound cocktails however the strawberry concoction I could take or leave- too much ice and not enough strawberry.  The bar is apparently known for its pintxos and I would have been keen to try them but genuinely felt that I might be risking my future gastrointestinal health if I’d proceeded. They had taken on the appearance of having been laid out at the edge of the overcrowded bar for quite some time, festering gently like some form of GCSE Biology experiment. 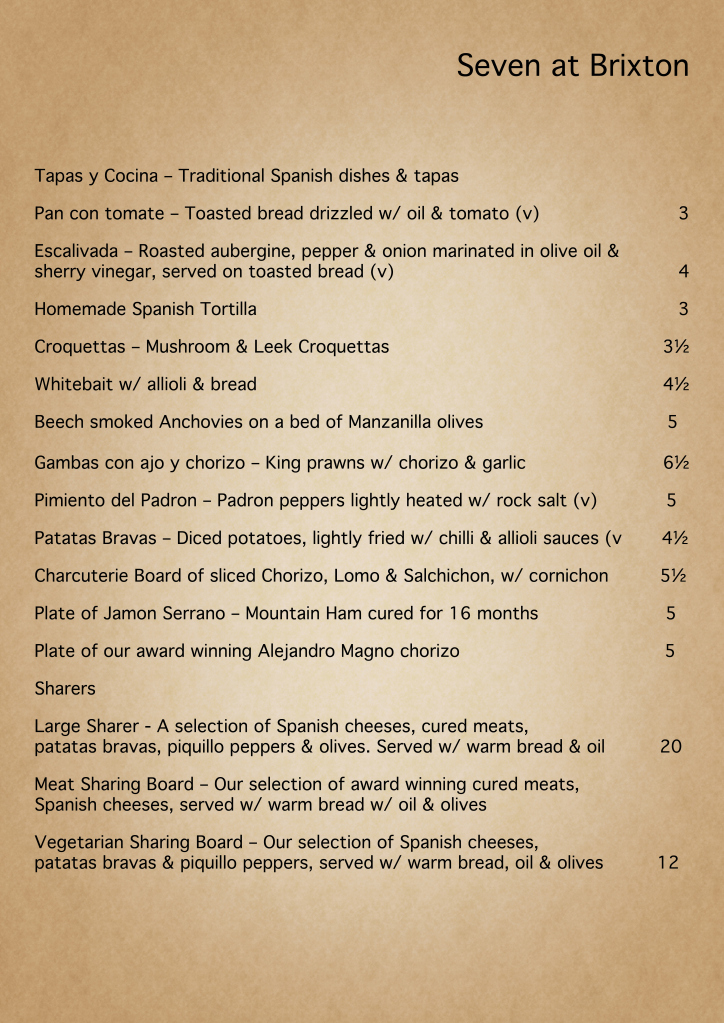 Now, I know that we’re pursuing a Spanish theme here but just what is wrong with the humble pound sterling sign might I ask? As currency symbols go it’s not a bad one and it’s done the trick for millions of people for quite some time now. So why the trend of leaving it off? Whilst I’m at it, why has 50p turned into ½? Are we going to see 75p in the near future as ¾? Or perhaps 40p as 2/5 (sorry there wasn’t even a symbol for that one)? It’s just silly and I don’t like it.

At £5 (sorry that should probably be ‘5 or something) padron peppers are not worth their price tag. If Dehesa can do them for less than a fiver then so should you, Seven. Your overheads are much lower and your food of a lesser quality than Dehesa, there is just no excuse. Croquetas, one of my favourite things on earth were ham and leek. HAM AND LEEK?! In a croqueta?! We’re creeping into ironic Findus crispy pancake territory here and I don’t even think they were being ironic. Although I suppose at least they were on the cheaper side at “3½”. 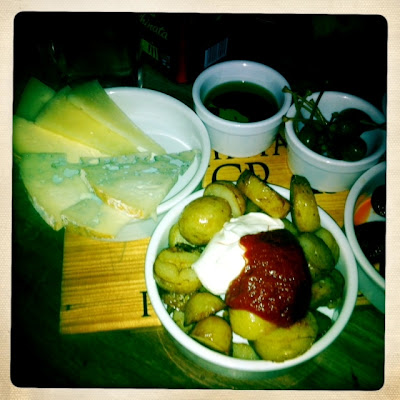 We ordered a large sharing platter for £20 and a couple of extra dishes. The platter consisted of patatas bravas (see more on that below), olives – decent but not exceptional, piquillo peppers, bread and oil, sliced cured meats and “a selection of Spanish cheese“. The sliced meats were decent quality and had been taken out of their packaging in a very skilled manner and been arranged prettily on the plank. Well done.

I am a massive cheese fiend. It is such a wondrous and varied creation with so many beautiful permutations, second only to wine but both sharing the characteristics of being a living thing that evolves and develops throughout its life and according to its surroundings. It was very clear to me that the slices of cheese had suffered greatly due to their surroundings having been cut some time previously and left out.  They had achieved the very special acclaim of managing to both sweat and curl as well as drying out. The blue was just clinging on but the second of the ‘selection’- possibly once manchego?- had long since deceased and was inedible.

It took three goes to find out what the blue cheese was. The first response was “blue”. I know its dark in there but, really? Your average Nappy Valley six year old would have a better punt at a description than that. When I dared to probe for slightly more detailed information the waitress offered to ask a colleague; “Spanish Blue” was the inspired response. I must have inadvertently let loose a small frown as the ‘chef’ was asked and finally we found out it was a Picos de Europa. Picos is usually quite a wet,  semi soft, sticky, cheese (not dissimilar in texture to a French Roquefort) however as you can see from the picture any sign of sticky had long since gone, the blue veins dried out to white. 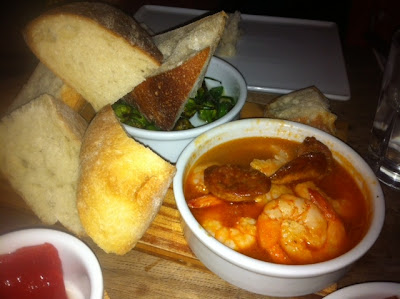 I put ‘chef’ in inverted commas because in all honesty I’m not sure that someone who visits a Spanish deli, lets the ingredients get to the end of their reasonable shelf life then serves them up on planks of wood deserves the title ‘chef’ but I don’t suppose he/she will be the last to be given this ill-deserved moniker.

One of the few dishes on the menu that does require cooking, mores the pity,  is the king prawns with chorizo and garlic. Overcooked, rubbery prawns bobbed around like sunburnt Costa del Sol tourists in a watery, oily tomato sea. If you had told me that they had been microwaved I would not have been surprised. The chorizo had been so over cooked that its flavour had faded to “slightly porky” although on the up side all its paprika had leached out into the liquid surrounding it giving a modicum more flavour.

Another “cooked” option was the patatas bravas. There was nothing brave about these potatoes. Roughly hewn slices of skin-on new potato were topped with quite sweet and sickly tomato sauce. This combined with the topping of a dollop of creme fraiche does not a patatas bravas make.


To me Seven at Brixton is the perfect example of hipster culture gone too far. I appreciate art, I love good food and am a sucker for a well mixed drink but the totality is just very underwhelming. Unimaginative, badly prepared food being served at over inflated prices to people who are there because someone said its cool. Noone in their right mind would travel to what is essentially a cold, cement market stall for fun unless there is a VERY good excuse to do so. Needless to say I won’t be eating there again any time soon.

It’s been a long time since I’ve written up such a hatchet job of somewhere as I generally have a lot of respect for the amount of work that goes into running a restaurant but in this case I have no such compunction; they clearly have no respect for their customers or the produce and ingredients to be serving this kind of drivel up. Maybe I caught them on a bad night, who knows? All I can attest to is that on the night I went it was pretty awful.  Pop in for a really very reasonably priced cocktail over the warmer summer nights by all means but please for the love of God if its anything like when I went, steer clear of the food. After all, its a matter of metres to all kinds of yummy treats in the form of Wishbone, Franco Manca or Honest Burgers amongst others so why would you put yourself through it?