So Chinese wine. Those two words in combination are not something that would usually get the pulse of your average oenophile racing. Admittedly when I think of China I don’t automatically bring to mind a great drink producing nation.  My last experience of local Chinese alcohol was on a trip to Beijing involving near lethal shots of jaw-shudderingly awful “baiju” sorghum spirit ultimately leading to an incident involving a pole dancing pole in a bar in Sanlitun and a skull-splitting hangover the following day. Call me small minded but memories like these don’t engender warmth and excitement about other Chinese drinks.

That said, China does have some pedigree when it comes to wine production.  Archaeologists believe that grape wine has been drunk and also made in China for over 4000 years.  What was made was generally for domestic consumption with over 90% of locally produced wine remaining in China. There is no geological reason why China can’t produce great wine. Partly due to the sheer size of the country, so many climates are covered within its borders. The diversity of it’s landscape and soils provide further opportunities for variation. 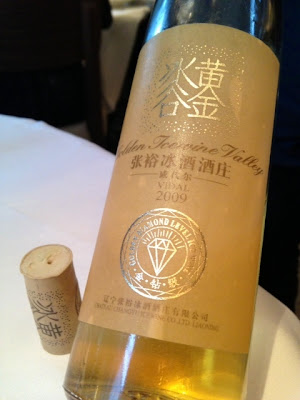 Berry Bros have received a lot of publicity over the last couple of months or so due to their decision to introduce four Chinese wines to their regular stock list. What drew more attention still was the fact that, of the four wines, three are ice wines, perhaps surprising considering around 80% of wine produced in China is red.  Plenty of cynics have suggested that this move is to curry favour with an increasing number of their Chinese clientele thereby indirectly questioning whether these wines are really that good or if there is an ulterior motive for stocking them. Either that or they are on to the next big thing and kudos to them for being brave enough to take the step.

Due to my ongoing love affair with sweet wine, I’m always going to be intrigued by a new dessert wine so set out in quest of a bottle. Oddly enough despite the publicity back in March, Berry’s didn’t actually have any of the 4 wines in stock. All are being sold “en primeur” despite the fact they are bottled and ready to go. but despite originally quoting June arrival Berry’s still don’t have stock apparently. They are also only selling in half cases of 6 bottles which is interesting. Personally I would be minded to try all of them if they were on sale by the bottle, if only for the novelty, but I’m not prepared to risk a punt on 6 bottles each of unknown stuff not due for another few months. Sort it out BBR!

Luckily there are others in the UK that do have stock albeit not at a retail level. Berkmann Cellars have some in stock now and have supplied to Medlar in Chelsea which is where I have tasted a glass and subsequently a whole bottle of the 2009 Changyu Golden Valley Ice Wine, Gold Diamond Label, from Liaoning.

Liaoning is a province right up in the north of China bordering onto North Korea. Nestled between the Nulu’erhu mountains towards the Mongolian border in the West and Changbai Shan and Qianshan mountain ranges to the East, the winelands are in a flat valley irrigated by the Liao river which flows through the province. The region is considered to have a monsoon climate with significant rains during the summer and dry weather for much of the rest of the year but, critically for ice wine, temperatures of down to -7c in the winter.

The “gold diamond label” (they’re not one for underselling their wines, are they?!) is made from the third press of the grapes and is therefore the lightest and consequently least costly option. Served in a tall, narrow, hand blown bottle it looks different right from the off.

Made of from Vidal (a blend of Ugni blanc and Rayon d’Or), the style is not incomparable with a light Canadian Ice Wine however, both the novelty of the wine and the more attractive price point make this a goer in my eyes.

Colour-wise it is almost the colour of apricot skins, mainly a light orange with slight pinky shades. Deliciously fragrant on the nose (expect tropical fruits), it follows through and delivers on the palate too. Balanced by a good acidity to temper the sweet, slightly viscous texture. Whilst bearing the expected honeyed citrus there is also an unusual but pleasant underlying light smoky tone which I hadn’t expected.

An excellent match for fruit desserts but equally delightful sipped on its own and would be lots of fun to subject  people to in a blind tasting were you so cruelly minded!