Plenty of people have been raving about Shoryu for some time now, so much so that I had expected arriving to Pitt Cue or Flat Iron style queues down the street. But no. The gas guzzling patio heater thingy was burning purely to warm the night sky rather than any hungry, patient punters. We walked in to a slightly feeble out of sync mumbling of “irashimase” and had the pick of the tables as the place was half empty. 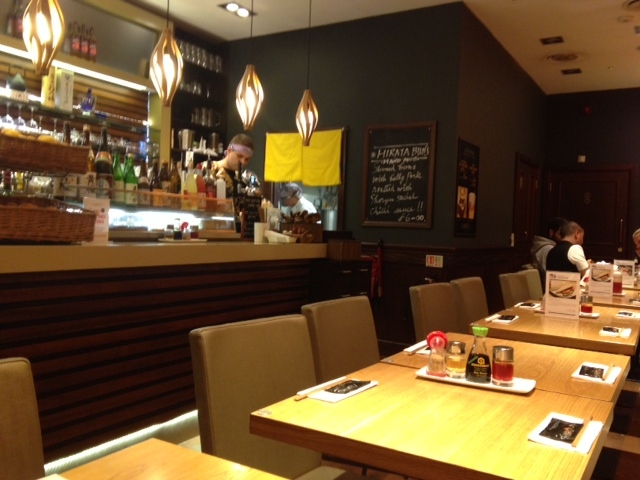 Maybe the slightly ghostly atomsphere was because I went to the Regent Street branch shortly after the Denman Street pop up opened. Granted it was a Monday night and on the plus side the majority of those frequenting the filled tables were Japanese which is always a good sign. Maybe I just got lucky. Overall, however, I can’t help thinking that I’ve missed the initial wave of enthusiasm and that, as the queues of excited London foodies have dissipated, so has Shoryu’s attention to detail.

Shoryu might claim to be Japanese run (by Japan Centre over the road) and to have flown in a chef especially but there was no hint of it the night that we visited. All those wearing chefs whites were distinctly pale and mousy of European extraction as were all but one of the waiting staff. Without meaning to be overly personal, there are some people who are not suited to wearing tight fitting stretchy oriental patterned shirts (I count myself amongst them) – I considered a photo but it would have been cruel. They look good on those for whom they were designed but get over a certain height/weight and its not good. Those same people should also probably not be forced to endure wearing a lilac purple “Daniel-san” Karate kid head band.

Hugh of Twelvepointfivepercent talked about a warm welcome and the beating of a drum, as did Marina O’Loughlin,  however on our arrival (and throughout the visit) the drum was just a silent, large and cumbersome ornament blocking up the main counter (albeit the only token towards a Japanese theme other than the fancy dress staff).  Shoryu, perhaps rather than theming your poor staff, you might focus on making the look and feel of your actual restaurant slightly less like any high street chain coffee shop and more like the “authentic” ramen joint you pride yourself on being- I’m not talking about making it a ghastly “themed” restaurant but at the moment its rather odd (right down to the flavoured coffee syrups on display – what’s that about?!). The accompanying soundtrack of “smooth jazz” music only helps to add to the sentiment that at any moment you might hear the whoosh of an Italian coffee machine and someone calling “skinny soy latte and the code for the free wifi please“. It feels wrong. 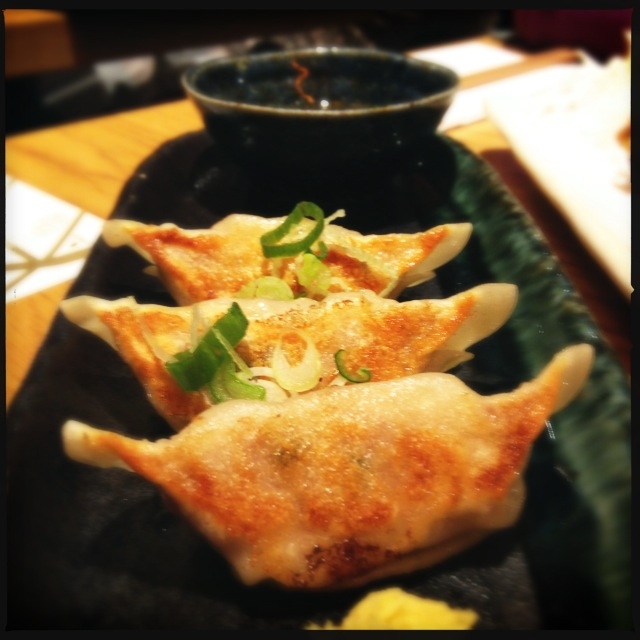 We ordered cocktails, opting for a Mountain Berry Martini and a Lemongrass and Ginger martini.  The mountain berry was off apparently so was swapped for a wasabi martini but apparently they couldn’t do this one either (how is this even possible? Wasabi is an every day item in the larder of any Japanese restaurant surely?!) So five minutes later two lemongrass and ginger martinis emerged. They were dire. I get that we don’t expect an inexpensive ramen joint to be master cocktail mixers but if you can’t do them properly then don’t do them at all.  Chunks of ice were floating around in the martini, no martini should ever have chunks of ice. There were also slightly weird browny black and hairy blobs floating on the surface which the lady in the black suit with  a supervisor badge (with power comes permission not to wear the silly outfit clearly…) claimed was ginger but I’m 99.9% confident that it wasn’t. Ginger is not black for starters and, whilst fibrous, is not hairy. So they both went back. L – rather bravely in my opinion- agreed to a replacement whilst I went for draft Kirin which is seemed altogether more reliable than the preceding cocktail disaster.  The replacement was ok. Just ok though. When they say ‘martini’ by the way, they literally mean “Martini” as in slightly 80’s connotation vermouth drink. They told us that the lemongrass had been omitted this time, oh and no shochu either (so just a ginger martini then…) and the raw ginger replaced by Belvoir ginger cordial. Ultimately a lemongrass and ginger martini supposedly made with shochu and fresh ingredients morphed into posh British ginger cordial mixed with Martini and water.

Ordering food was almost as painful. I am sure that the handheld electronic ordering machine and system is designed to make the system as accurate and efficient as possible but it didn’t work. Not only did we have to repeat our order multiple times for it to get typed into the little black box but two sets of other people’s food were wrongly brought to our table and I later got the wrong dessert. Perhaps good ol’ pen and paper might be better?

From the “Starters” list we tried gyoza which had a decent flavour and a little kick oozing oil into the dipping sauce. Soft shell crab was not bad, the tempura coating quite light but a little on the greasy side. 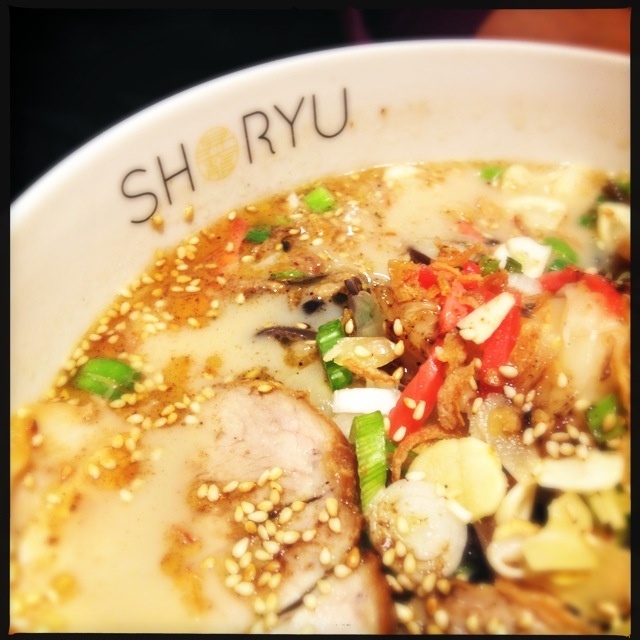 Onto the main event. The redeeming feature is the ramen. The basic ramen package involves kiruage mushrooms, bean sprouts, spring onion, sesame, ginger, nori and mayu garlic oil as well as the unforgettable nitamago egg; soft in the yolk and rich as can be (although I’m always left wanting the other half as you only get half an egg).

The char siu pork is lovely, tender rolled roast pork but is categorically not “bbq” as the menu claims, not a whiff of barbecue colour or flavour in sight. The meat is nice and succulent though and good as roast pork goes. The broth, however, is an absolute delight. Deep and rich in flavour and creamy in texture, there are no watery bland noodles served in the name of ramen here. This is down to the heaps of pork bones that are stewed for a loooong, long time in preparation whilst meticulously skimming off the surface to leave behind an opaque but smooth soup. 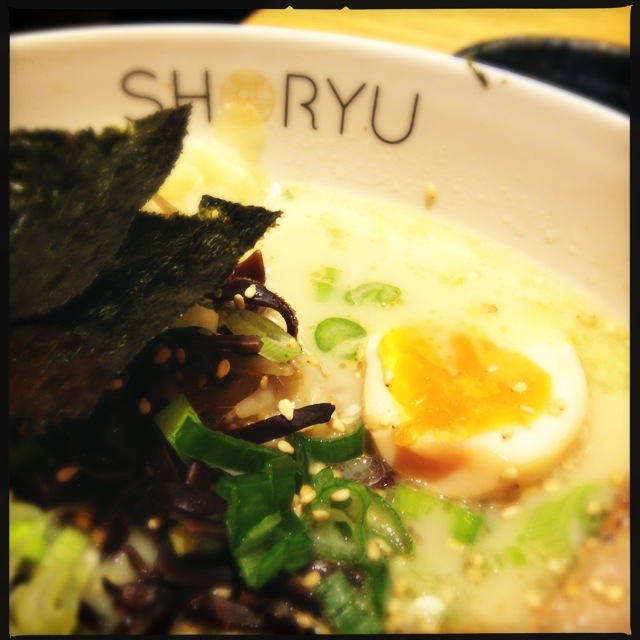 As long as you aren’t planning on speaking to anyone for the following 24 hours, the Dracula Tonkotsu Ramen is an excellent choice. In addition to the basic package you get added mayu oil, balsamic vinegar and garlic chips leading to a darker soup. It claims on the menu to be spicy but I didn’t find it overly so. This would be my choice if I were to return.  There are over 15 further permutations above and beyond those we tried and many do sound pretty good. Menu highlights for me include the Yuzu tonkotsu and the Hokkaido curry ramen.

Desserts are bought in from Japan Centre over the road so don’t be expecting anything that London hasn’t seen before on that front. I always forget when I go to Japanese restaurants in the UK that the Japanese aren’t massive on desserts on home turf let alone abroad (memorably after a spectacular seven course savoury meal in one michelin star Tokyo sushi house, dessert was a single strawberry). 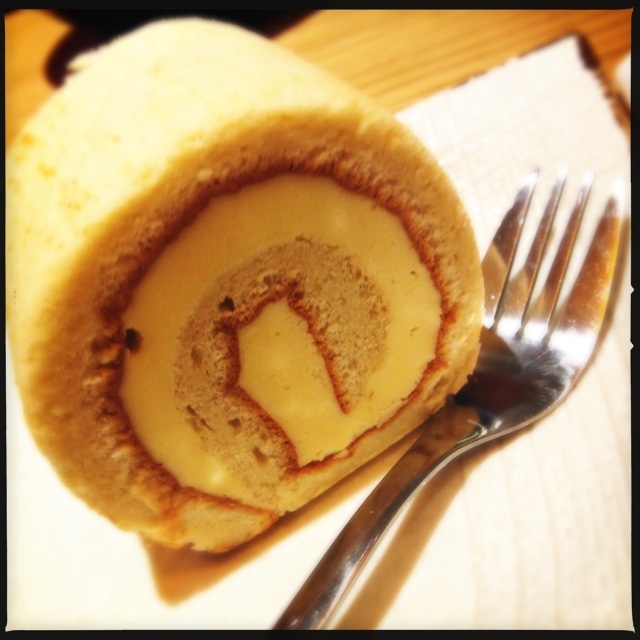 The yuzu sponge roll was sort of like an arctic roll but with a large quantity of some kind of slightly citrus flavoured butter instead of ice cream. Very greasy and just a tiny bit bland.  It wasn’t awful but I wouldn’t order it again.

Would I go back? Ask me after I’ve tried other ramen trendies Bone Daddies and Tonkotsu! If I were in the area and very hungry then I would definitely stop by for a bowl of ramen but I wouldn’t travel for it. I also regret not having tried the hirata buns so they might be worth a revisit. So long as you stick to just a ramen and a cold beer and are immune to service issues then its excellent value for money and a good example of a decent ramen. If you want a great dining experience then avoid.