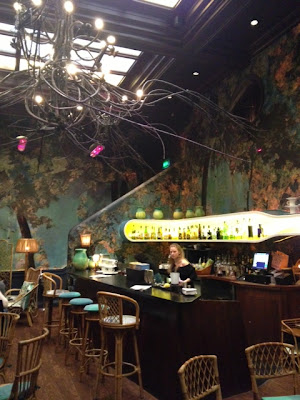 From the outside Sketch could be just another one of Mayfair’s private member’s clubs. You know the sort; well kept white painted, stucco fronted Georgian townhouses, guarded by the obligatory bowler hat adorned doorman. Take the first step through the door, though, and you find yourself in a fairytale house, each room more different and stranger than the last.

In fact, the whole building is all rather crazy fabulous and reminiscent of a set from Alice in Wonderland or Charlie & The Chocolate Factory. A hopscotch chalked on the floor leads you inside from the front door (of course I couldn’t resist it, such a child!) to the main desk with a neon art installation inciting you to “jouez” behind it. That kind of sums the whole place up, its all about play.

Sketch’s website advertises the afternoon tea as being served in “The Glade” which is effectively one of the bars adjacent to the main restaurant. The walls are painted as a forest and a giant chandelier of branches hangs overhead. LED projectors on the back wall beam little red lights onto the walls refracted by moving mirrors. Whilst its all very pretty, it might have been less disconcerting if the moving lights were white like little zippy fireflies rather than the wandering bright red lights which made you feel every so often as though a rogue sniper had locked his laser target on your dining companion’s head. 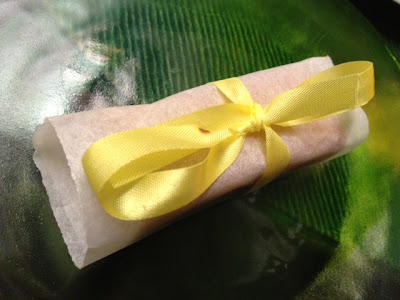 Priced at £36 this comes in on a par with various other afternoon teas in London. This possibly didn’t feel as good value as some other venues as no refills were offered whereas places like the Ritz and the Berkeley are constantly plate refilling. This is more a psychological issue than a real one though as we did leave feeling full to bursting. A large coupe of Pommery champagne can be added for an extra £12, slightly steep maybe but it makes it more of an occasion

The tea is served in a rather natty stack of plates and cups stuck together to make a three tiered tray. You are advised to begin with the warm pesto and mozzarella croque monsieur wrapped delicately in paper and tied with a yellow ribbon (although the inclusion of a staple to keep the paper attached to the sandwich was perhaps an odd decision from a health and safety perspective). Glorified cheese toastie it may have been but it was also properly delicious. 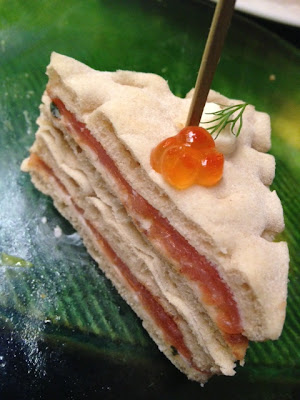 Other savouries included a slightly limpid and soggy cucumber and ricotta sandwich topped with asparagus – being the only disappointing thing we ate all afternoon despite being quite pretty. A richly flavoured egg sandwich was topped with caviar and a half quail egg truly taking the humble egg sarnie to new levels.

One of the highlights of the whole tea was the smoked salmon flatbread sandwich which had a fabulous citrus zing to it and may well have been the best smoked salmon sandwich that I have ever eaten.


Scones were springy and buttery and peppered with raisins. Served warm and tucked away in  a napkin cradle, they were the epitome of a classic British afternoon tea. Coated with excellent clotted cream including the obligatory yellowy crust and beautiful smooth, sloppy strawberry jam and orange marmalade. I’m definitely a cream first then jam girl. It really is amazing quite how heated a “discussion” can become about which way round to do it! Who on earth in their right mind would ever put the jam on first? Honestly! There was supposed to be a scone photo but I got over keen and jumped in teeth first before remembering I was supposed to be taking a picture. 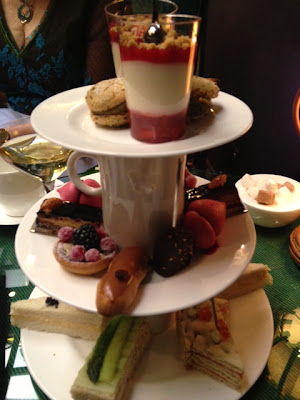 The pastries were by far and away the highlight of the experience though- and so they should be coming from a Pierre Gagnaire managed kitchen in all honesty. Pistachio macaroons were a rich green with pistachio ganache filling. Nothing new you might suppose but they held the surprise of a sweet cherry hidden deep inside the filling whilst dainty, pink raspberry meringues were stuck together with a runny but tangy raspberry coulis. Coffee eclairs were firm of choux pastry but squidgy of middle, stuffed with a delicate coffee custard. The Opera cake was a complete success; praline, cream and chocolate sponge topped off with a perfect mirror smooth slick of chocolate ganache on the top.  Red berry tartlets consisted of a crumbly, buttery soft pastry filled with a wobbly creme anglaise and topped off with sugar dusted berries. 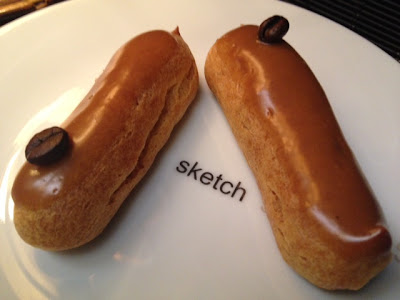 Topping the triple-tiered tower of treats was a trifle. Not just any old trifle but one described as “cheesecake in a glass”. A sweet but tangy rhubarb compote was tempered by a creamy layer before a jelly and crumble completed the topping. All your nursery favourites in one little shot glass.

The “parlour” room serves all day food and drink and serves larger cakes on their own so even if you’re not up for the full ritual of an afternoon tea it makes an excellent pitstop for a quick cake or cocktail during a hard day’s shopping on Regent Street or Bond Street. 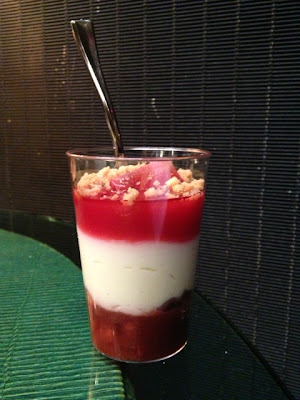 The tea selection is very good, a full selection from over 15 teas, including all the golden oldie black teas (earl grey, English breakfast, Assam etc), a couple of Oolongs, white tea through to several green teas, the list culminating in the heavy matcha green tea. I went for the flowering osmanthus green tea, mainly because it looks so pretty as the flower opens.

Its impossible to write anything about Sketch without mentioning the toilets, they are without a shadow of a doubt the craziest toilets I’ve ever seen. Up a bright white spiral staircase to a stark white garden of eggs with a huge rainbow curved glass roof above. Each toilet is a pod within a separate egg. When Sketch first opened there were all sorts of rumours about the pods being used for various nefarious purposes, some just about legal, some not so much and I can well imagine it. 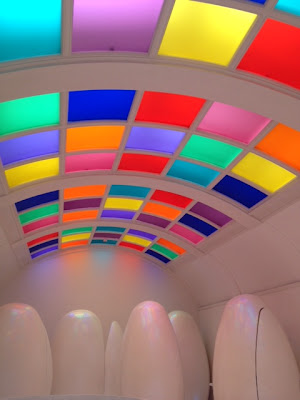 Were there any negatives other than the “no refills”? Hmmm maybe the service which swung from super attentive to sporadic and was on occasion a tiny bit patronising (“You’ve managed to finish all that food? Oh well done you!”). Looking around though the average clientele does seem to still be very “fashiony/PR/mediaaah” so its entirely possible that most people don’t finish the tea. Oooops.

So how did it measure up on the afternoon tea scale? Visually the Berkeley really would take some beating but purely on a taste basis Sketch was a winner for the combination of flavours and avoidance of over cloying sweetness. That said The Berkeley, although a bit less trendy, felt like more of a treat so I’d probably go back there before Sketch. One thing that is worth remembering though is that afternoon tea is served until 6pm so it does make a more novel alternative to pre theatre dining in the West End.