Bumpkin has crept onto the London restaurant market over the last couple of years and spread its tentacles throughout the more traditionally well heeled areas of London. Now appearing in Notting Hill, South Kensington and Chelsea (or “Glamorous Chelsea” as it is described on their website) it is most definitely designed to attract a certain crowd. I’m thinking hangover food for the cast of Made in Chelsea or buggy friendly brunch for perplexed couples looking lost on a Sunday morning when the nanny’s got a day off.  The focus here, as we are repeatedly reminded at every opportunity,  is on keeping it British. 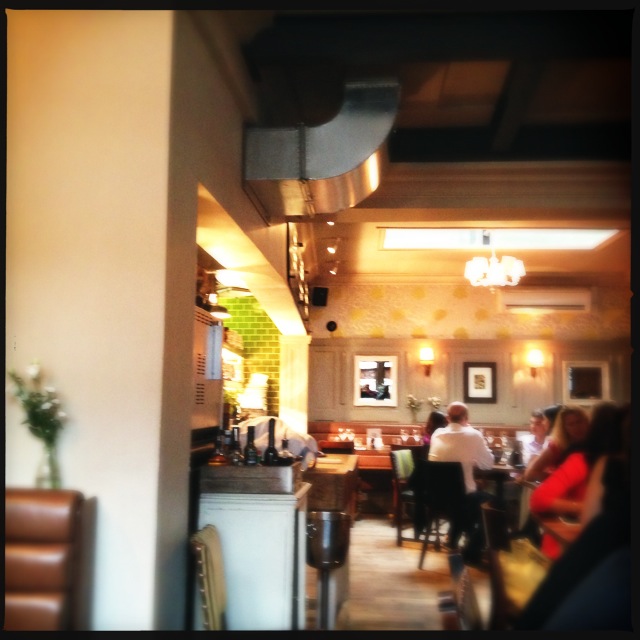 Even the name of the chain tells us a lot. A bit oldy worldy and countrified. Its designed to appeal to those who would ideally take little Tarquin and Lily to the Cotswolds country cottage at weekends to appreciate everything “rural” but have found themselves into negative equity on the townhouse so this will have to do for now. The decor is rustic chic (sometimes too rustic, I snagged my dress on the underside of a table). Leather banquettes rest alongside aged tables and wilting flowers nestle on the side in recycled glass vessels whilst posh wall paper and chandeliers do just enough to make sure we don’t forget it’s more than a country pub. Ultimately, its a middle class eaterie churning out all the right phrases that make well to do Londoners feel good about themselves; organic, locally sourced, sustainable blah blah. Yes, its all important stuff but its not a business model.

Sitting in the bar with the intention of a pre-prandial glass of white, I struggled to get the attention of anyone working there. Despite three people stood chatting at a till less than two metres away I was left with my arms flailing wildly like a loon to manage to place an order. Having eventually succeeded in hailing a passing waitress my first choice was “off” and the second arrived just before we were taken to our table. The wine list is limited at best and lacking in quality. Replete with the popular favourites by the glass (all the usual suspects are present, Australian chardonnay, pinot grigio etc) there is nothing there that is going to rock your world or widen your wine knowledge. A £30 bottle of picpoul de pinet was a little too acidic and rather overpriced (£6-7 a bottle retail).

Despite the menu being pretty wide ranging with nine separate themed sections (such as “Best of British Pies”, “Sides from the Garden” and “From British Shores”)  I was stumbling to find something that really rocked my boat and made me think “eat me now”.. 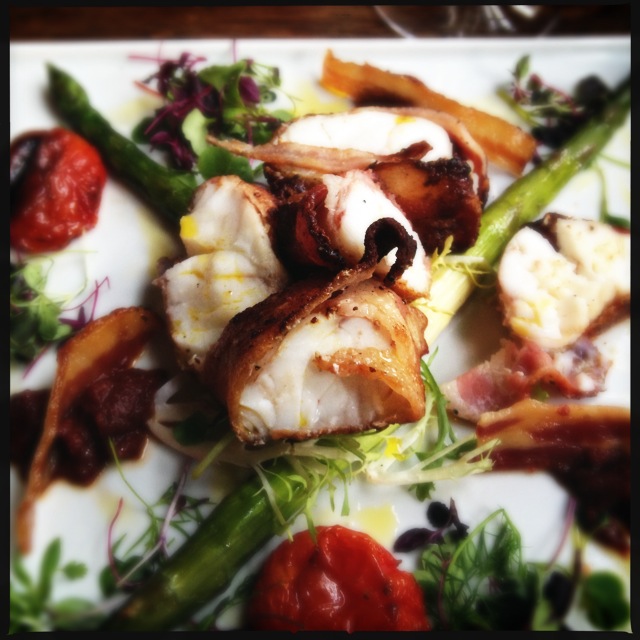 After rattling mechanically and slightly incomprehensibly through the day’s specials, we managed to establish from the waitress that there were two fish specials which we both ended up ordering. In my case this took the form of the monkfish wrapped in bacon with roast asparagus.  Hailing as I do from asparagus land on the borders between Warwickshire and Worcestershire, I am conscious that I am used to very high quality seasonal asparagus. Perhaps this has set lofty standards for my taste in the stuff or perhaps not. This was not so great. Rather too woody in the stem and slightly undercooked, it was a little underwhelming. The monkfish, though, was beautifully cooked. Firm and springy to the touch whilst maintaining a moist succulence. The outstanding highlight of the dish, though, was a bacon tomato jam. Deeply savoury with the salty smoke of the bacon prominent, it was an absolute joy. If I could only have nipped in, bought a jar of the stuff and scooted out again perhaps I would have a rather better opinion of Bumpkin. 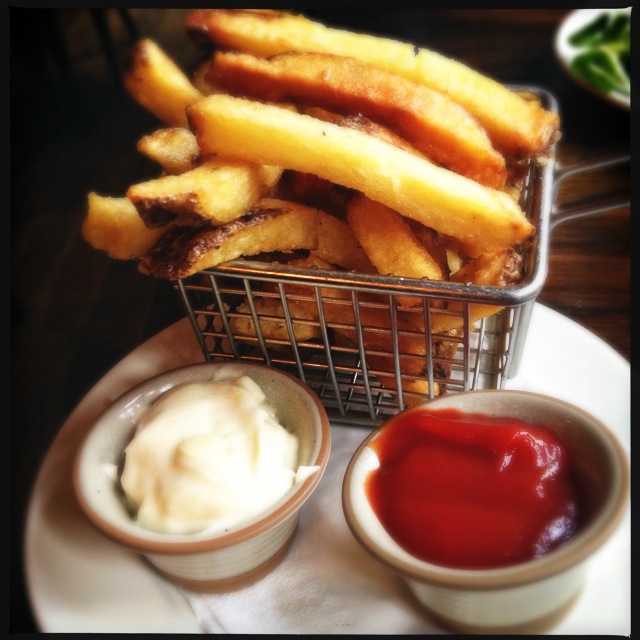 Lacking in carbs somewhat I ordered a side order of chips which arrived in the now ubiquitous mini frying basket and were good and crispy on the outside but a little floury inside. Their main flaw however was that they had a faint but pervading flavour of fish making me wonder whether the fish from the fish and chips (listed on the menu as “sustainably sourced and very British!” – quel surprise…) had been cooked in the same oil.


C went for the other fishy special in the form of a whole seabass. Granted he’s not particularly photogenic and would have me running for the hills with all those bones, skin and that milky eye but apparently he was quite well cooked if rather overpriced. 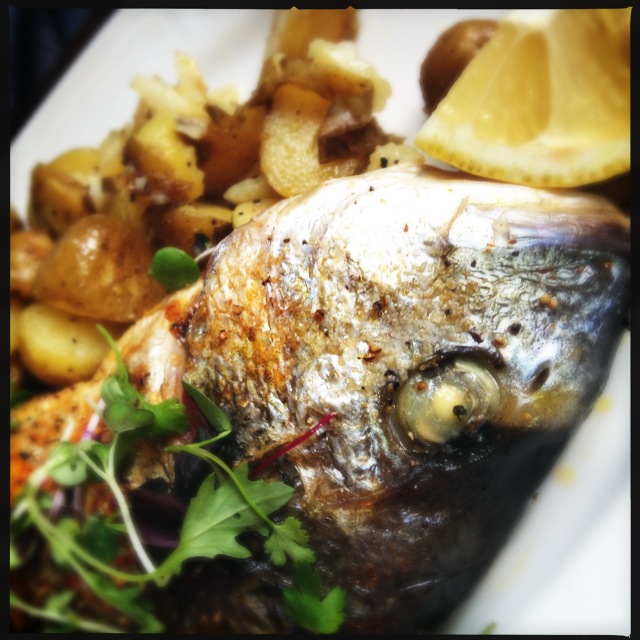 So pros and cons. The food we had was decent quality and generally presented and prepared competently. Service was mediocre at best. So here’s the rub. At over £40 a head for one course and a bottle of very standard wine it didn’t feel like great value for money. Would I go back again? If someone told me they were going I wouldn’t tell them not to but equally I won’t be rushing to recommend it.


A decade ago Bumpkin would probably have been rather innovative in its offerings both in terms of presentation, sourcing of ingredients and outlook but in a post jubilee come down and a much more crowded market for posh pub grub its image and menu are all rather hackneyed.

Call me snobby but I’m also yet to find anywhere truly worth revisiting that has also featured in an episode of Made in Chelsea. There is a definite correlation developing. First came an average meal at Le Cercle and their subsequent PR release about featuring in the illustrious Bafta winning show and then up popped Bumpkin on screen in more than one episode. I’m sensing a trend and may have to keep watching only in the interests of knowing where not to go you understand…..