Location, location, location.  Its a catchphrase that has spoken only the truth since way before Kirsty and Phil got their hands on it and one that applies in spades to Thai on the River. Despite London being split in two by the long winding Thames there are comparatively few good places to eat overlooking the river compared to the length of water. Sure The Ship is lovely at Wandsworth Bridge as is The Gun over at the Eastern end and there are plenty of other gastro type pubs but they get understandably rammed the moment that we have a glimpse of sun by drinkers. So where to go that might not be so well known?

Located overlooking the Thames, Thai on the River has a fabulous view of the river with access from both the river path and also the main road to the rear. There are few things in London that can make a person quite as happy as a beer on a warm evening by the side of the river.  I think this is, unfortunately,  possibly the only reason that TOTR limps on as a going concern though (that and their takeaway service).  I tend to end up visiting once every couple of years and have never seen it any more than a quarter full despite pretty decent food and the river view.

On the downside, the restaurant is located very close to Battersea heliport so any chance at conversation is intermittently drowned out by the landing of a nearby aircraft.  If you aren’t approaching from the riverside then it is also a bit of a toad to get to which can’t help dining numbers. The 170 bus from Clapham Junction will take you there but other than that its a good 15 minute walk from nearest overland station and 10 minutes to the nearest main road for other buses. 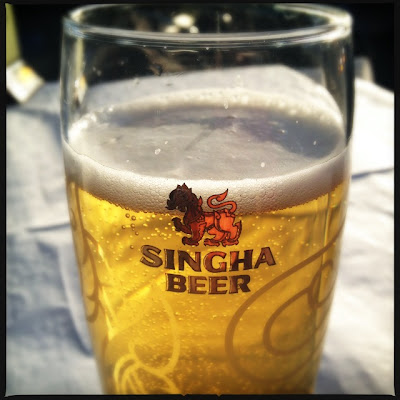 The wine list is really very limited and unimaginative whilst also not necessarily selected to match Thai food (for example there are no Riesling or Gewurztraminer wines on show). There is, however, the only Thai wine ever to have gained wider repute (or notoriety depending on your thoughts on it) in the form of Monsoon Valley. That said, a glass of house champagne is £7 and a Singha beer £3.50 so its not like you’re stuck for reasonably priced options.

The menu offers little beyond standard thai fare so I wouldn’t come here thinking you’re going to find anything remotely innovative or groundbreaking. P opted for corncakes to start with sweet chilli dip. To say that they weren’t fabulous is a little bit of an understatement, the batter mix outweighed the corn content and wasn’t cooked through so there was quite a gungy, doughy texture that clogged up your teeth. The non-veggie fish cake version was far superior with a spicy chilli blast, that sort of spongy springy fish filling that only Thai fish cakes have and a good deep golden colour. 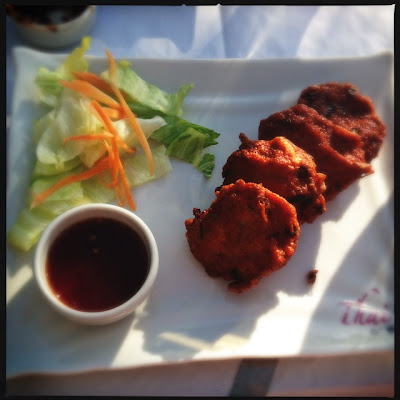 The chicken massaman was a total triumph. I have eaten a few too many watery, over spiced slops claiming to be a massaman recently so was overjoyed when this one had the thick creamy consistency it ought to with a fantastic depth of flavour.  The coconut was prevalent but didn’t drown out the more subtle cardamom and cinnamon notes. It also had a gentle growing warmth rather than an eye watering blast of spice.  Ultimately, I think that I prefer a beef or lamb massaman where the super slow cooking has broken down the meat to “fall apart on your fork” consistency of the type that you find at the Blue Elephant however the chicken was succulent and plentiful. Jobs a good’un. 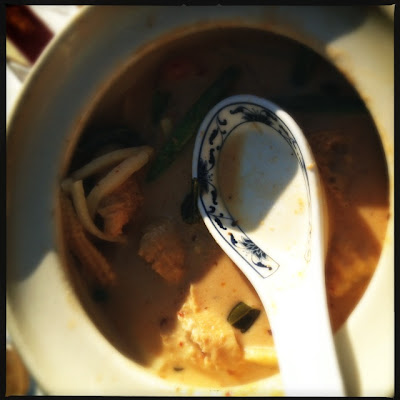 P liked her veggie red curry and had nothing but praise for it although I thought it a little insipid and not quite as spicy as I would have expected.

No complaints from the coconut rice however the sticky rice took the word “sticky” to new heights. Glued in a giant dollop into the little basket it arrived it, it took effort worthy of a Crystal Maze game to prise it out and split a chunk off to eat. 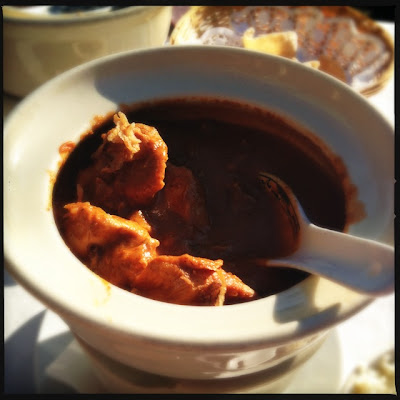 Sadly, as with many Thai restaurants, desserts are nothing to write home about so we gave it a miss.

Mains are between £8-12 so we aren’t talking crazy prices and there is a 10% discount if you book in advance online. There is a very varied £20 set menu for two people plus and there is also an unlimited Sunday buffet for £16 a head which sounds as though it could be excellent value.

I feel a little sorry for Thai on the River. It has been in situ for decades as a good local Thai with a solid local customer base. Suddenly along comes Blue Elephant moving into a location only a few hundred yards down the road and TOTR becomes the shabbier little brother. I hope that it can cling on.

Would I go back? Yes but only to sit on the terrace on a balmy, summer’s evening and nibble away. If its just for Thai food and its not a sunny warm day then are probably better places to visit.