The uncharacteristic heatwave of the last few weeks has made us forget the wash out weeks of June when we all thought a sunny day would remain ever elusive.  On a June Friday night pre-theatre visit to the Ivy, as I shook off my umbrella having been splashed by a passing taxi, comfort food was close to my mind. Comfort food is something that the Ivy undoubtedly does extremely well. Once past various paparazzi images of celebs falling out of or into cabs, a Google search of “The Ivy” would be guaranteed to bring up more references to cosy options like sausages and mash, shepherds pies and berries with white chocolate sauce more frequently than any other dishes. 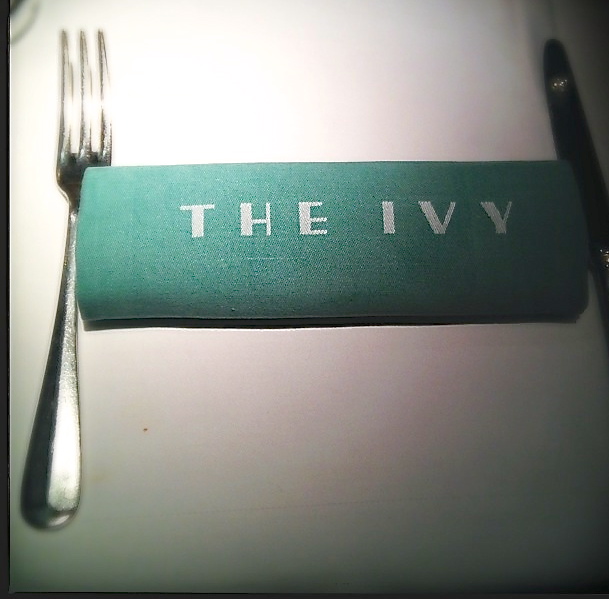 I think that certain myths abound about the present day Ivy, none of which have ever been my experience:

1) Its really hard to get a table

True enough, I’m not suggesting that you can just walk in without a booking but if you know when you want to eat and ring up a couple of weeks in advance for prime time then I’ve never struggled. On more than one occasion I have called for same day pre-theatre tables and succeeded. Equally, it is isn’t cheap but, whereas it was very expensive in the uber-fashionable heydays of the late nineties and early noughties, prices haven’t gone up much in the last few years. Many mains are between £15-£27 which is the going rate in many a half decent West End location these days. As for the service, I’ve always found it to be smiley, efficient and effective. 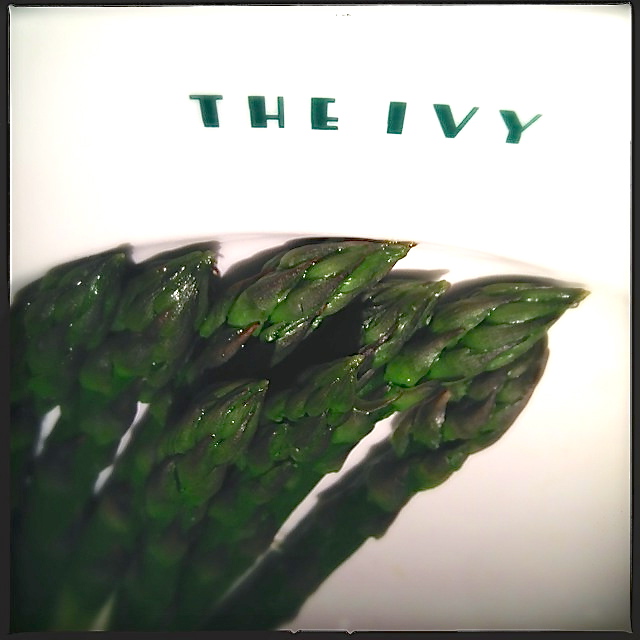 Now that the bulk of the celebrity throng has drifted on to pastures new many of the regulars at the Ivy are, (how to put it politely?) getting on a little in the tooth- perhaps explaining the preponderance of comfort food. That said, there is always a buzzy atmosphere, even at 5.30pm when the pre theatre crowd are in full swing. The menu also offers a wide variety of options and regularly changes with only a few stalwarts keeping their place on the list. If you want to go with grilled fish and salad, hold the dressing then that’s absolutely possible (you’d be an idiot to but if you’re that type then you’re probably not reading this blog to begin with…)


Summer was in evidence only in that beautiful English asparagus can be found featuring on London menus. There can be few things more lovely than the simple delight of the first crop of English asparagus dipped into fresh hollandaise sauce. The Ivy offers a starter portion for £12 which seemed a little steep for a vegetable starter but it was pretty huge,  we shared it between 3 as an ample light starter and used the spears to mop up every last drop of smooth hollandaise. Properly delicious. 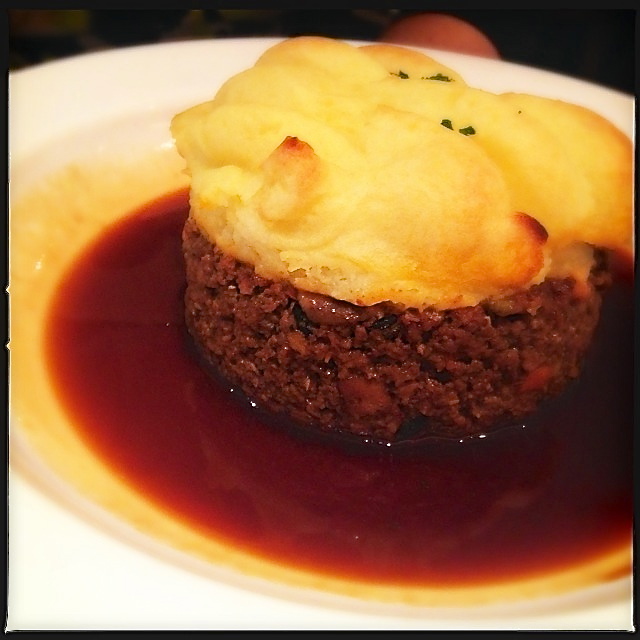 Despite several people having recommended the shepherd’s pie to me, I’ve not yet selected it as my own option (i’m not the world’s biggest lamb mince fan)  but definitely will on my next visit. The gravy is exceptionally rich with a surprising depth of flavour (dare I mention that overused term ‘umami’? No thought not…) Topped with fluffy, buttery potato peaks just crisped off to a golden brown. Its also enormous, I’d challenge anyone to order it and leave hungry.  One thing that does up the cost a bit at the Ivy is the fact you do really need to order sides of vegetables, as you can see from the Shepherd’s pie, without a side order its just meat.


The wine list has some pretty heavy hitters with suitably stratospheric price tags to match as you would expect with some of The Ivy’s clientele; £450 for an ’88 Ch Palmer or £195 for a ’94 Leoville Barton. That said, there are options under £30 and I went for a Montellori chianti at £35. Light enough not to smash through the subtlety of the veal but strong enough to stand up to the shepherd’s pie. Job done. 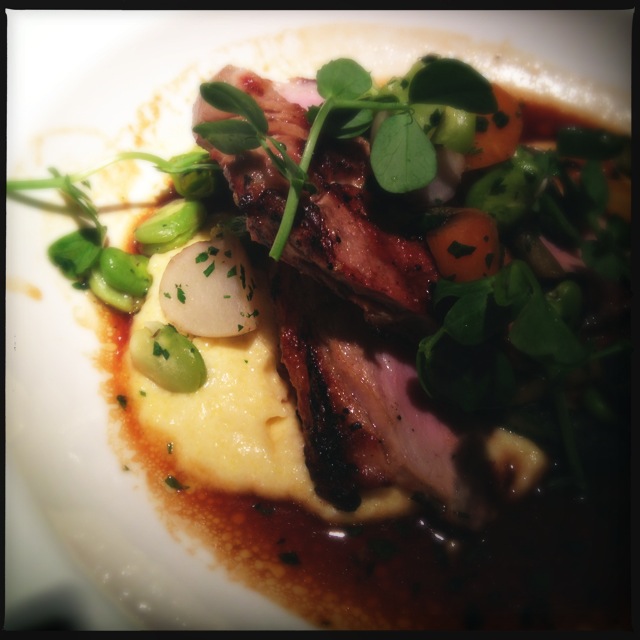 A caveman sized veal chop sourced from Southern Ireland was a beautiful rose colour and as tender as can be. A rich sticky jus was accompanied by broad beans and watercress. I’m a recent convert to veal. I’m ashamed to say that historically I had few cares about where my food came from with the sole exception of veal. The idea of the palest white meat on an Austrian schnitzel plate meaning that the little calf may not have seen the light of day was pretty horrid so for years veal was verboten. I’m even more ashamed to say that it was Janet Street Porter that converted me. Seeing her explain on tv that actually lots of British bull calves were being slaughtered because noone wanted their meat seemed like even more of a waste so I started eating it again and boy am I glad I did. A good British or Irish rose veal is a delicious thing.

Crackling pork belly with parsley mash and honey carrots was another success eliciting oohs and ahhs from every slippery, glistening mouthful.  I can also vouch from previous visits that the sausages and mash with onion gravy would take some beating. None of this stuff is in any way healthy, the mash is more butter than it is potato but by god, its good. 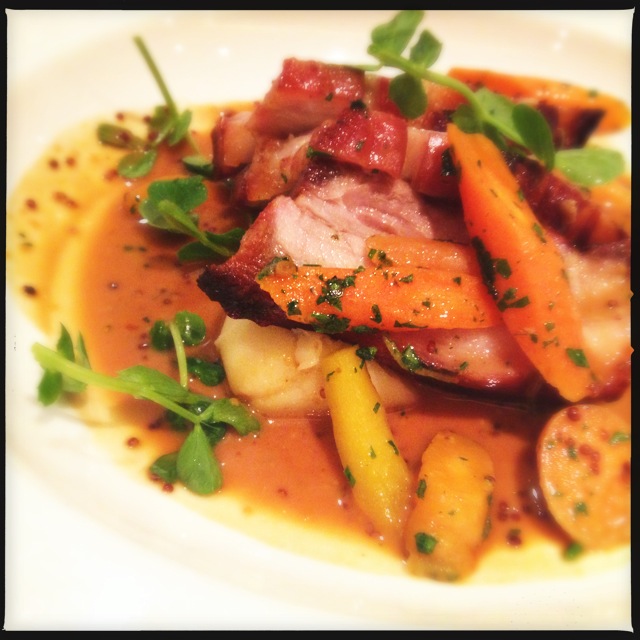 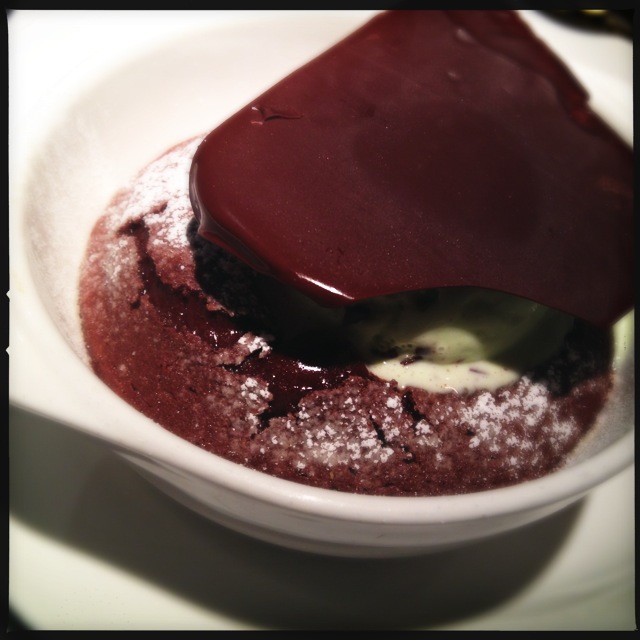 Hot chocolate souffle with mint ice cream was essentially like a chocolate fondant served in a ramekin rather than what you would traditionally think of as a souffle but no complaints coming from me.  It was, completely, utterly, irrefutably divine. I even cast aside my weird aversion to combining hot and cold things as the mint ice cream was plunged down into the oozy fondant centre.

A lot of people think that my Dad is fussy (some say that I might have inherited it…..) but I know he’s not really. All he wants is simple food made from good quality ingredients, prepared well. He’s not alone in that I suspect but its amazing how often places manage to get it wrong. If any restaurant gives him an excellent but simple steak and chips followed by apple pie he will be loyal forever. Apple pie is a rarely seen item on many menus these days though. I tend to involuntarily hold my breath when my Dad gets to the dessert menu as its so often all about deconstructed lemon meringue pies with crumbs of meringue on the side or jellied blobs of weird savoury stuff mixed in with a dash of fruit puree. But a simple apple pie is a wondrous thing so it was with a sigh of relief that I saw it on the Ivy dessert list. It didn’t disappoint either. 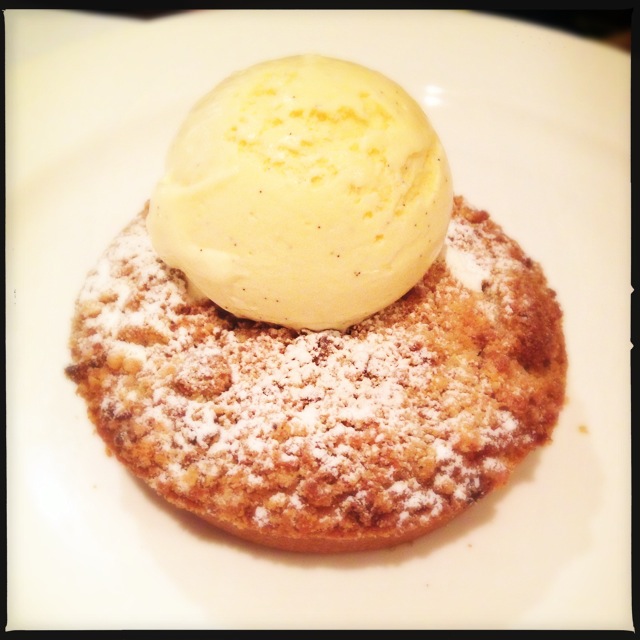 I’m not suggesting that The Ivy is cheap by any stretch of the imagination, however it isn’t as crazy outlandish as many imagine and I have to disagree with its detractors, from my multiple visits it has never been anything other than an absolute pleasure and I have no doubt that I will be returning time and time again (especially as my parents now seem to view it as their new London haunt…).