I seem to have acquired a bit of an afternoon tea habit in recent months. Served late enough in the day to pop open something fizzy, it always feels like something of a celebration. I somehow try and justify that filling myself with a plethora of pastries and sandwiches is a good thing on the basis that a) tea can replace lunch and dinner thereby meaning you eat one less meal making it “healthy” and b) all the components are bite size small (although I’m sure that it would be frightening to see them all in a big heap). I am also supremely confident that this is a false economy.

I’m not the only one that has jumped willingly onto this cake laden band wagon. There are now whole websites devoted to identifying the best afternoon teas. Some years ago it seemed to be only tourists who came to London with “afternoon tea” on your tick list of things to do.  Now even long time Londoners are regularly to be found gossiping away over a pot of lapsang souchong and a plate of scones.


Some  London eateries are going out of their way to find methods (I was going to say gimmicks but that might be unkind) of marking themselves out from the competition.  The Berkeley has the “Pret a Portea”, BRGR Soho is currently marketing a “burger afternoon tea” and the Sanctum Soho hotel is doing a men’s afternoon tea replete with mini burgers and JD and they are just the tip of the iceberg. 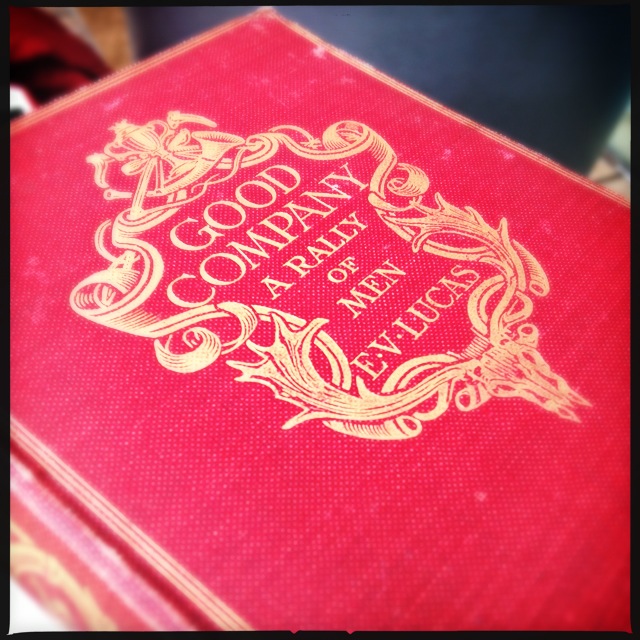 The Sanderson has gone down the route of an Alice in Wonderland “Mad Hatters” theme. Their website has a bizarre warning that fancy dress will not be tolerated which gave me fantastic mental images of someone taking theme a bit too literally and turning up late dressed as a giant rabbit. 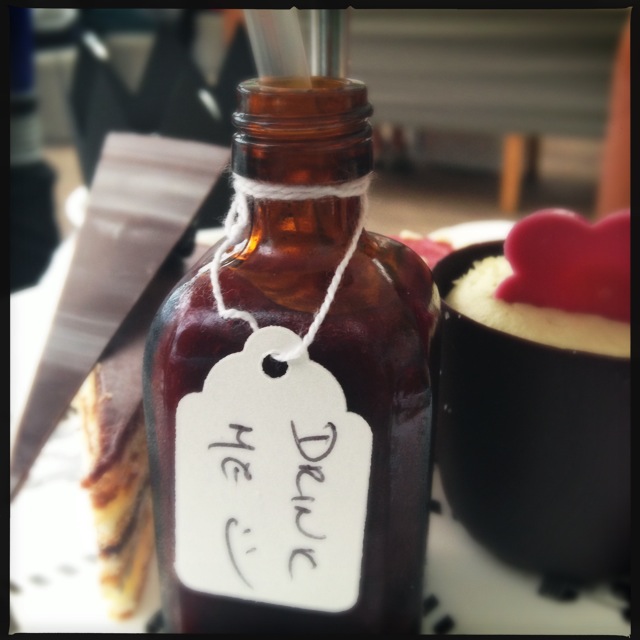 On arrival I wandered through the bustling main restaurant area, hoping my table was not one of the indoor high ones with stools (who wants to eat afternoon tea perched atop a bar stool?) until I found P lounging in the corner of the garden. Phew.

Perhaps it didn’t help that I had a colossal hangover, but I expect an afternoon tea to be a soothing, calming experience. What should be a haven of outdoor tranquility (especially as its called the “Japanese Garden”) is spoilt partly due to the sheer number of tables they have crammed out there each with a two hour turnover- don’t even think of trying to have a private conversation-  and secondly due to an excessively noisy water feature. I feel a bit like “Outraged of Tunbridge Wells” even using the phrase “excessively noisy water feature” but its actually really annoying. It took four, yes FOUR, attempts at ordering a Diet Coke before the waiter could hear me and he blamed the water feature. Yep, sure it looks pretty but can’t it be pretty a bit more quietly? (doesn’t that apply to so many things/people in life?) 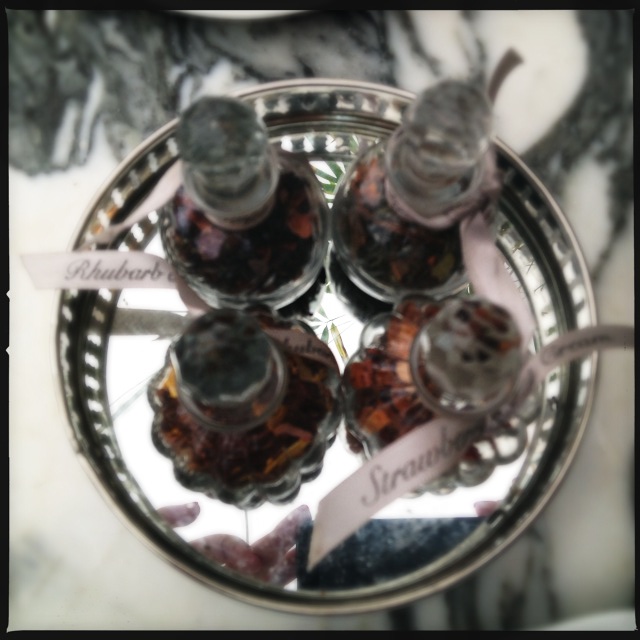 A silver tray of four crystal bottles introduces the four specialist teas including mint chocolate (chocolate tea? Hmmmm), strawberry, rhubarb and custard and  apple pie. They all smelt either sickly sweet or rather overly perfumed to me (and one actively looked like pot pourri) so I opted for a standard green tea which arrived in a suitably themed teapot. 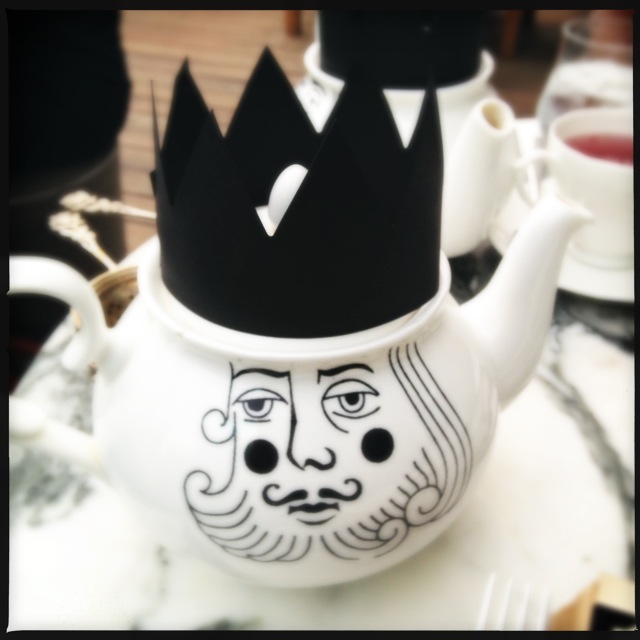 So onto the actual food (when it finally arrived that is, well over 30 minutes into our 2 hour “slot”). 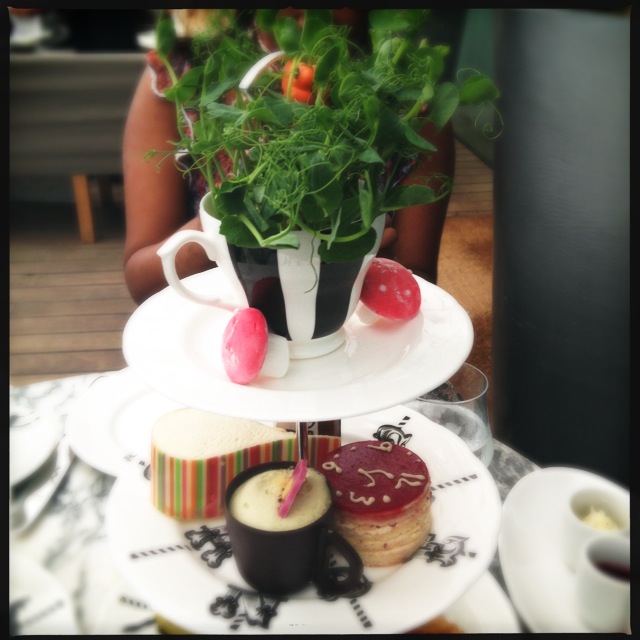 The carrot meringues in a pot of pea shoots make a visually stunning topper to the tea carousel but, again, had no real flavour and had gone very slightly mushy. 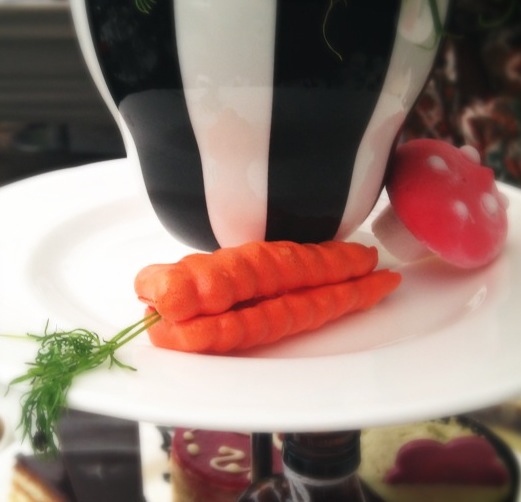 The highlight for me was a delicate dark chocolate cup filled with a white chocolate matcha mousse topped with a pink chocolate daisy. Totally OTT clearly and very much on the sweet side but very delicious. A victoria sponge clock was also a tasty play on the classic and deserving of its place on the tea stand. The real let down of the outing, however, were the savouries. I know that in the original book Lewis Carroll described sandwiches that were rolled “like hedgehogs” but the fact is that unless the bread is super fresh sandwiches aren’t made for rolling. In this case they were crumbling apart and seemed slightly stale. I appreciate that when you’re serving what must have been topping in excess of 200 covers every 2 hours you can’t make a fresh batch for each table but if you can’t do them well, don’t do them at all.  The fillings were the standards with a twist; ham and mustard on tomato bread, smoked salmon and lemon butter on rye bread, egg mayonnaise on a slight funny sweet tasting bread (the menu claimed it to be egg and smoked sea salt on lemon bread) and a cream cheese and cucumber roll on spinach bread. 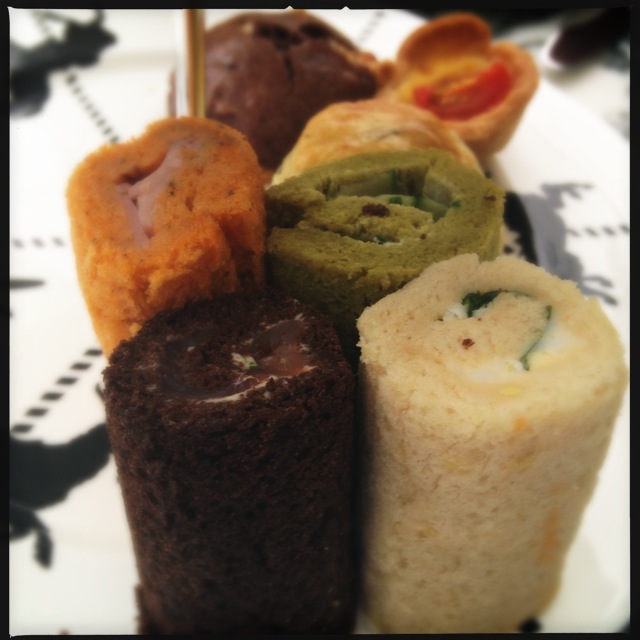 The savoury scone was a high point with a dense flaky crumb served with herb butter. Most disappointing of all, perhaps, was the chocolate scone. It didn’t look like a scone for starters. Scones are supposed to rise. They are supposed to have a gentle outer crust that breaks to reveal a soft, warm inner just crying out for clotted cream and jam. These were rock cakes. They should have been embarrassed to serve them in all honesty. 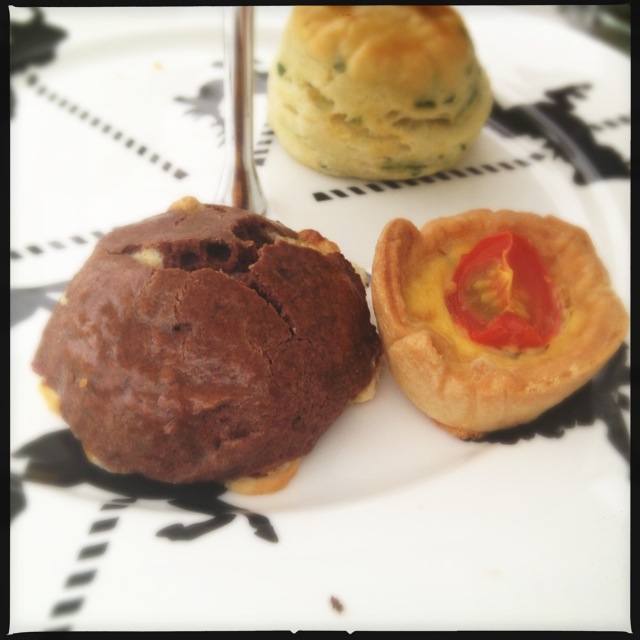 Talking of being embarrassed to serve something, this brings me finally onto the cheese and tomato quiche. I genuinely would not have served these misshapen objects to any guest in my home and I’m no professional. A heavy, clumsy blob of solid shortcrust pastry contained a tiny teaspoon of under seasoned eggy cheese mix topped with a shrivelled cherry tomato quarter (too shrivelled to be fresh and not shrivelled enough to be sun-dried; just ugly!)

The experience ends with what is optimistically titled “jelly wonderland” which turns out to be a table that you can go and serve yourself from buffet style of various flavoured jellies. I was too full to be bothered especially after P had reliably informed me that a) it was hard to determine what flavour each one was supposed to be and b) they were all horrible.

Price wise, at £35 (without champagne) its on a par with some of the other big hitters but the quality was not there for me both in terms of food and service. Despite the extremely patchy service there is 15% service whacked on top though which almost brings it into line with the total cost at the Ritz and I know where I’d rather be. It was a fun afternoon and a good girly activity – maybe as a break from shopping on Oxford Street, perhaps ideal for a hen party as you wouldn’t be making too much noise. I think I will carry on my quest for the perfect afternoon tea for now though as I didn’t find it here.