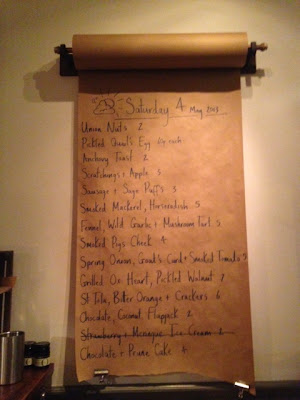 I love Adam Byatt’s first restaurant, Trinity, nestled away in Clapham’s Old Town. Good honest produce, cooked well. Bistro Union was his much heralded second opening on Clapham’s Abbeville Road just a stone’s throw away from Trinity. I knew we weren’t looking at fine dining but other than that didn’t know what to expect. What I got was a warm and welcoming neighbourhood bistro with plenty of options whatever the size of your wallet or appetite.  It wasn’t all plain sailing though…. 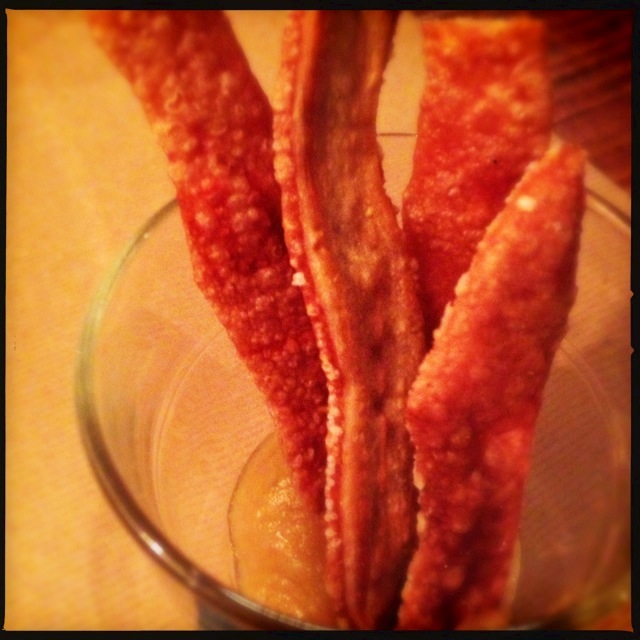 A drinks list offers a decent selection of both wine and cocktails and something I’ve never seen before, what are essentially mini cocktails as a pre prandial snifter. I had a gin based confection for only around £3.


A brown paper roll announces the day’s bar snacks and either offers something to nibble on or a selection of cheap starters depending on how you look at it. Pork crackling with apple sauce sounded like the perfect accompaniment to some menu perusal. The uniform sticks of crackling were very pretty and the apple sauce tangy and not over sweet but the crackling didn’t seem super fresh meaning that, rather than being crunchy hard, they had softened off slightly into both chewy and hard. Every bite felt rather like I was tightrope walking a precipice into potential dental disaster unfortunately and this may have been the first time that I didn’t finish a pork product.

A carafe of wine was plonked in front of us unceremoniously and we were left to sample and pour our own.  However after trying to pour it myself I can see why the server didn’t want to pour it for us. The carafes are clearly designed by the same mischievous person who designed those metal cafe teapots that resolutely refuse to pour liquid into a cup but result in more of it ending up on your hands and the tablecloth.


The house red wasn’t bad and works fine as a “gulper” to accompany a basic dinner. 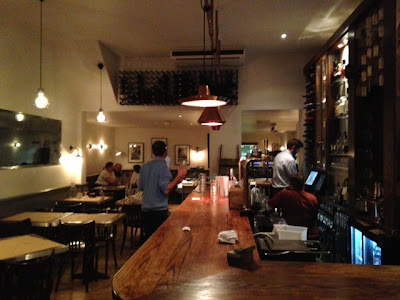 Service was a little haphazard with wrong dishes appearing and disappearing at frequent intervals. Some of the staff were super friendly whilst one was clearly having a bad day with his own personal rain cloud

Mushroom, wild garlic and fennel tart came from the small bites menu which are kept on the bar counter. It was very tasty although I couldn’t identify fennel amongst the flavours. If tasted blindfolded I would have thought it just creamy mushroom and garlic.


Mac n cheese was good and worth going back for especially for a vegetarian. Properly nice and gloopy with thoughtful vegetable additions  which might annoy a macaroni purist but turned it successfully from a side dish into a veggie main course. 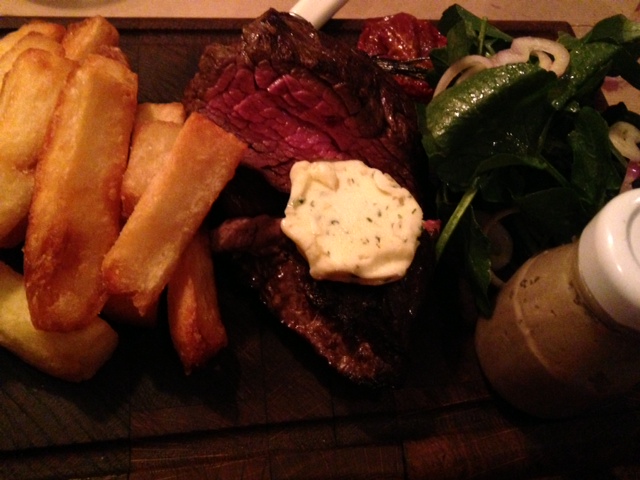 Bavette was cooked medium rare (I had been warned that it would be too chewy rare) and to be honest it was still overly chewy and half of it stayed on the board. Chips were very good  but please, for the love of god, stop using those infernal mini ketchup bottles! On one hand you have to shake it like an imbecile to get anything out and even then half of it stays in the bottle to be eternally unreachable even when you root around in there with your knife. They must be an absolute bugger to clean and they waste so much sauce. I pity the poor sod that has to fill them each day. The mushroom ketchup that was served with the steak (in one of the annoying bottles) was not very mushroomy and had more of an anchovy taste to it and, well, just wasn’t very nice really. If you want to make mushroom ketchup take a leaf out of Heston’s book I reckon.

Chocolate and coconut flapjack was a little on the tough and dry side resulting in yet another sore tooth moment. The ice creams and sorbets though are definitely worthwhile and a great little sweet ending to my carnivore meal (I don’t know what it is but when I’m dining with a vegetarian I always seem to inadvertently order the most bloodthirsty options possible oops.)

Although it was, overall, a pleasant evening and supper, I was left wondering whether some kind of deal had been done with the dentists down the road to cause maximum risk of tooth based troubles after dining. Between the crackling, the steak and the flapjack I did begin to sense a conspiracy…. Considering the pedigree of head chef Karl Goward (Soho House New York, St John Bread & Wine) I might have expected more consistency in all honesty.

Would I go back? Yes, if I was meeting friends locally and wanted a bottle of wine with a really good selection of bar snacks, then I would. The menu is extremely good value, especially the bar snacks.  It is very much a neighbourhood restaurant but probably not worth travelling the length or breadth of London for (whereas Trinity very much is).