The two major elements of my life
seem to be fusing rather publicly on Twitter at the moment. When I’m not
wittering on about food and drink here on my blog I spend my days earning a
crust as a trade mark lawyer*. There have been a few instances over the last
few months of companies applying to register trade marks for things that a lot
of us would assume are rather descriptive so I thought it might be an idea to
clear up some of the misconceptions about what you can and can’t do in relation
to IP and food.

The most recent incident involves
Pho Holdings Limited who started their restaurant branded as “Pho” in
Clerkenwell in 2005. They appear to have contacted “Mo Pho” who are based in South
East London with a legal threat based on trade mark infringement and passing
off. Apparently they are demanding that Mo Pho change their name which I think
is a big old shame as a) Mo Pho’s name is a really cool play on words and b) I
think that Pho’s name is rather boring; its like calling a Dim Sum restaurant “Dumpling”
or “Har Gau”. On the face of it “pho”
is a dish that all us foodies (and any Vietnamese) know and love as a classic,
iconic dish of Vietnam so why or how could someone acquire a monopoly right to
prevent others from using the name?  In
fact there are essentially two questions to be answered here 1) Are Mo Pho
infringing Pho’s trade mark? and 2) Should Pho’s trade mark even be registered
at all?

At its most basic you can’t register
a trade mark which is either a) descriptive or b) non distinctive.  This is what has got people hopping up and
down about the Pho case. “Pho” feels descriptive. Also where would this end? Will Pho be chasing down every London restaurant that dares to have “pho” on its menu? The system is designed to prevent this.

Pho Holdings Limited appear to be
claiming on Twitter that they aren’t actually claiming a monopoly over the dish
name but to the right to use the name for restaurant services. When you file a
trade mark application you have to choose from a list of goods and services to
which your trade mark will apply. For example class 29 is meat and processed
foods, class 33 wines and spirits whereas class 43 is for restaurant
services.  From a quick check of the
trade mark register, Pho Holdings Ltd have registrations in the UK and EU for a
whole host of classes some of which actually include food (thereby arguably covering
the dish itself) They even have a registration for “Phocafe” which covers “noodle dishes”.  Naughty, naughty!

One way of getting a difficult
trade mark registered is to include a logo (making it more distinctive) and
this is what Pho seem to have done. They  have a variety of registrations for the logo mark (see above). They only have one word mark for “Pho” but its arguable you could challenge this as a) not having been used in a trade mark sense (a cursory glance indicates they only seem to use the logo mark on their website and use “pho” generically on the menu) and b) descriptive (see below re cancellation). This
means the legal comparison could potentially be between the entirety of each mark i.e. “MO PHO”
versus the “logo+Pho”.   Even more different now eh?!

To decide whether something is an infringement
you need to compare the marks and if it can be shown that either a similar or
identical mark is being used for similar or identical goods then, in essence
this could be the grounds for an infringement claim. One defence to
infringement is to show that the claiming mark should never have been
registered at all and if not then to file a cancellation action. If I was Mo
Pho this is the route that I would be exploring with some specialist lawyers right about now. The challenge will be to show
that “pho” was recognisable to consumers at the time of filing (2005) in a wide
area (i.e. not just London or even a Vietnamese populated part of London).

Mo Pho have also apparently been
accused of “passing off”. Passing off occurs when someone (in this case Pho
Holdings) have good will and reputation in a brand which they can show has been
misrepresented by a third party (in this case Mo Pho) and is in danger of
leading to damage to their brand. Or in essence, would consumers be likely to
be confused into thinking that Mo Pho is in some way linked to Pho and as such,
money is spent at Mo Pho which would have been spent at Pho?  It is very hard to prove in the UK (and
expensive) so let’s hope Pho have got their cheque books ready and that Mo Pho
get the support they deserve to fight this.

On this I wish Mo Pho all the
luck in the world as I would like to see them able to continue trading under their current fab and imaginative name. That
said, let the Twitter storm and the PR continue – the case deserves it!

Soho House Group have applied for
a whole host of trade marks in the past year including “Duck Shop”, “Meat Shop”,
“Fish Shop” and “Steak Shop” covering (amongst other related services) “Services
for providing food and drink” all of which have successfully reached
registration.

They have also registered “Dirty
Burger”, which I’ve used for years to describe a multitude of burgers
(especially ones outside football grounds), meaning that the next time you’ve
had a skin full and say to a mate “I
could murder a dirty burger” you should in theory say “I could murder a Soho House Dirty Burger™”

I’d be interested to hear if
there are any other examples out there. Okay so taking the work hat off now, boring
law lecture over and back to the usual antics of eating and drinking. Cheers!


UPDATE: After an afternoon of Twitter doing what it does best at a frenetic pace, Pho Holdings posted the following tweets this evening: 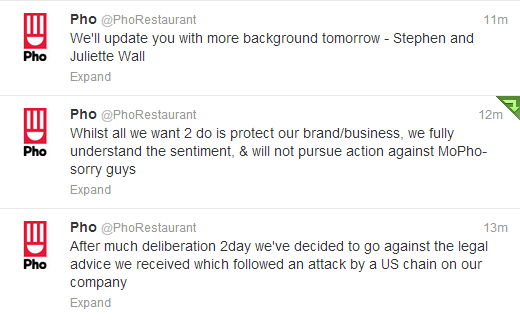 I’m glad that what could have been a nasty protracted legal battle for all parties has been resolved without the need for litigation. Hard as it is to believe, lots of lawyers don’t like litigation and do what we do to try and avoid it!

*Important disclaimer: none of this is legal advice, its my
own personal thoughts from a decade of experience. If you’re in any doubt or
have got yourself in a pickle then consult a paid lawyer.  You can also find lots of useful IP advice at
the UK government Intellectual Property Office website www.ipo.gov.uk
They also have a helpline which, although they can’t give legal advice
is nonetheless very helpful!