The Sanctum Hotel is billed as an “opulent 30 room boutique hotel” located just off Regent Street. Although flashy, it isn’t really opulent, its all fur coat and no knickers. It trades on a theme of rock star glamour and glitz but in reality is a little more Footballer’s wives.  “Faux” is a horrible Gallicism designed to soften the damnation of something being just “fake” but it applies aptly to pretty much everything about The Sanctum. Banquettes are upholstered in a garish gold plush pleather and chairs are the type of burgundy high shine mock croc only previously seen on a hooker’s boots in Pretty Woman. If I were to encapsulate the decor in one phrase it would probably be “Vegas wipe clean”. 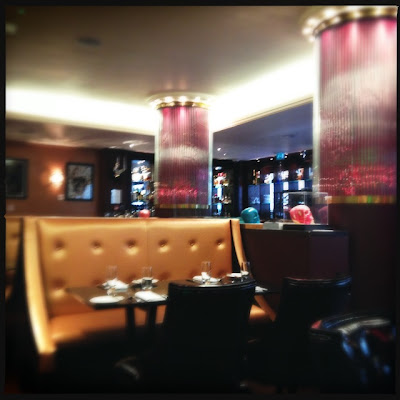 The walls are adorned with every permutation of modern skull art possible from neon light installations to spray painted graffiti numbers, apparently an exhibition of Dan Gold artworks. Each item has a sizeable “For sale” sign and price glued to the wall, in fact in one case the price tag was rather more tenacious than the artwork itself which is absent. The overall impression is one of overpriced stag do.  We were the only poor souls in the restaurant on a rainy Sunday afternoon making the atmosphere even more depressing. 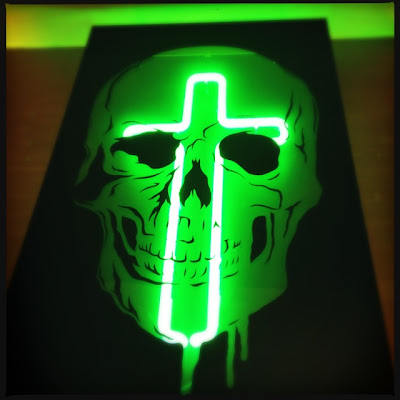 There is something that gets my hackles up about the idea of “Gentleman’s afternoon tea”. Its all a bit Yorkie “not for girls” isn’t it? This sentiment is reinforced by the fact the the laydeeeez alternative is the “High Tea for High Heels”. That said the prospect of sliders and beef Yorkshire puddings appeals to me much more than “mini parmesan crusted fish pie” so any mild feminist indignation is cast aside. I had heard good things about the Gentleman’s Afternoon Tea and found a deal online for two people for £75 instead of £50 each. This seemed pricey still but as it included a whisky and a cigar I thought that to be the reason for the uplift beyond the London £35-40 average price tag. What follows is unfortunately a description of the worst afternoon tea I have ever been served at an arrogantly inflated price. 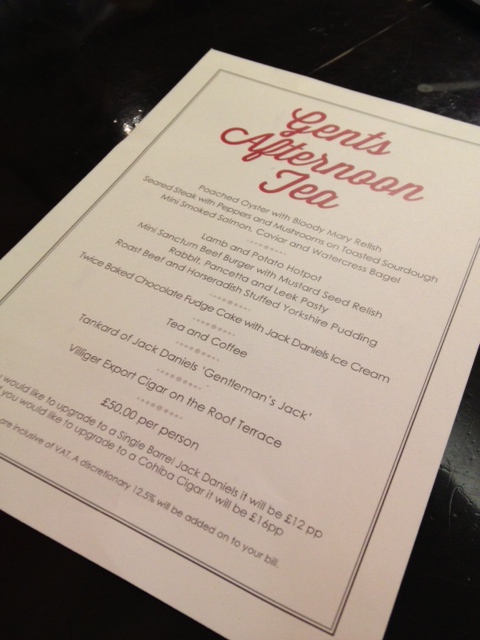 Tea and coffee is “unlimited” but considering the tea options are all bags made by Twinings this really ought to go without saying. My green tea was an accurate representation of Twinings green tea as was the English Breakfast tea.  That’s the best I can say about it.


My main complaint with the menu at Sanctum was that various bits of it sounded fantastic in theory but in reality didn’t ressemble their description in the slightest. For example “seared steak with mushrooms and peppers on sourdough” was actually a slice of cold, wet roast beef on stale wholemeal sliced bread. Yes, you could argue I’m being picky, after all its still a beef sandwich but don’t describe it to sound better than it really is (especially if you’re going to reuse the same sliced beef later on as something else).

The oysters themselves were not bad but the “bloody mary” sauce on them was extremely spicy.

The smoked salmon, watercress and caviar bagel was a good size but the bagel was a bit too doughy and heavy rendering it rather chewy. Although the salmon was well smoked it was just laid in a bare bagel with a sprig of watercress plonked on top. I see from the “girls”  option that their menu has a lemon creme fraiche, smoked salmon bagel; the simple addition of some creme fraiche may well have improved the version that I received immeasurably. 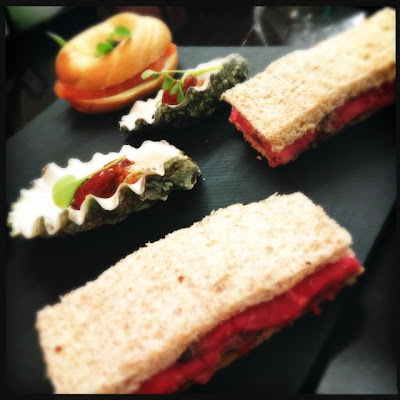 The second platter most closely resembled something you would expect to see in your local Slug & Lettuce as a bargain basement happy hour platter to line those rosé swilling stomachs. The Yorkshire puddings were a dry splodge of batter with a small roll of roast beef inside with the stingiest topping of horseradish I have ever seen (we asked for an extra portion of sauce). Incidentally the beef was the same stuff served as “seared steak” during the first course. The mini slider burgers were ok flavourwise but completely overcooked and the bun wasn’t the freshest. I understand that the restaurant doesn’t usually open on a Sunday for dining and is only there for afternoon tea so if I was being generous I might surmise that the “usual” chef isn’t working on a Sunday. As you can see from the photo its all rather beige….. 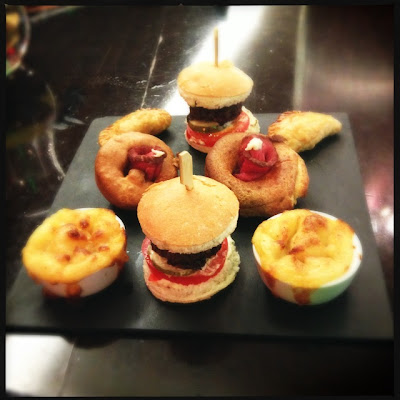 The lamb and potato hotpot was as close to a ‘highlight’ of the experience as you could get in that it was okay. It had a decent cheesy mashed potato topping and well seasoned pink lamb filling. This made it more of a shepherd’s pie than a hotpot and it could have done with a little more gravy but it wasn’t bad.

The “rabbit, pancetta and leek pasty” was dry and stringy at best, and utterly bereft of any sign of pancetta whatsoever in either one and, frankly,  if that was rabbit then you can call me Flopsy and knock me down with a cotton tail. 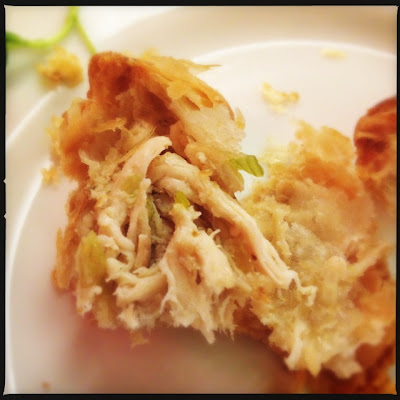 Dessert was an inedible abomination. Billed as “Twice baked chocolate fudge cake with Jack Daniels ice cream” it was actually half of a dried out nut brownie on a completely unnecessary squirt of raspberry sauce accompanied by something purporting to be ice cream. Actually inedible. To add insult to injury it was the half of the brownie that had been cooked at the edge of the pan on two sides leading to extra dry crumbliness. The ice cream had essentially had too much alcohol put in it therefore destining it for an inevitable doom of failing to freeze. The cream had completely split resulting in texturally horrible splurges of grease. I really cannot describe eloquently enough quite how vile it was. 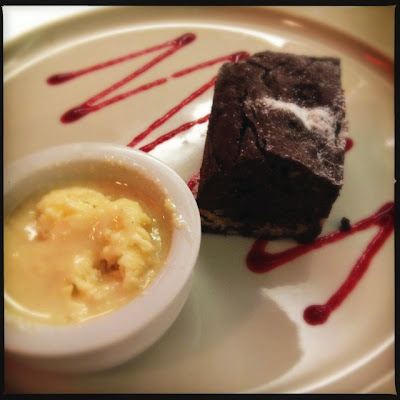 We left it virtually untouched and sprang onto the whisky element of the menu -after all you can surely not go wrong pouring a whisky (either standard JD, a honey version or the Gentleman’s Jack were on offer- although not in a ‘tankard’ as billed). The honeyed option was really good and reminded me of the basis of an Old Fashioned. The cigars were pocketed for another time and we paid up and scarpered.

They say that every cloud has a silver lining and in the case of the Sanctum this was most definitely the service. Our waitress was a ray of sunshine and did her best to make our experience pleasant despite the slurry of dross being ejected from the kitchen hatch. She showed an interest in what we were doing later in the day and loved to talk about food, drink and her home region. I have no idea what Sanctum’s policy is on division of service charge but you can’t hold front of house staff responsible for bad cooking so I only hope that the  12.5% goes directly and entirely to her and is not swallowed into the pockets of a greedy hotelier because she deserves it and they don’t. She was upset to hear that we hadn’t enjoyed our experience (I don’t believe in pretending everything was okay then slating it online later so I was up front about it) and said she would pass on the feedback to the hotel and they would likely be in touch. I’m unsurprised to say that a week later I haven’t heard a thing.

When you think that tea at somewhere that really understands the meaning of the word ‘opulent’ like The Lanesborough or the Goring is around the same price overall when you include a glass of champagne then the Sanctum is little short of a disgrace and I have no compunction about saying so.

We left still feeling hungry and popped round the corner to Yauatcha to top up on a couple of dishes of dim sum. The cocktails there are still fantastic and the food great too so maybe go there instead, or anywhere else actually, just not Sanctum.