Back in the mists of the 1990s, in the days when TV cookery shows were not as prolific in their abundance as they are now, when Ready, Steady, Cook was new and Loyd Grossman confused us all with his Masterchef transatlantic drawl, Nancy Lam exploded onto our screens as the larger than life and eccentric Indonesian chef.

Her restaurant ‘Enak Enak’ (or “Yum Yum”)  actually came before Nancy’s tv career rather than being a spin off from it and underlines the reasons that she was plucked from obscurity to become a tv chef to begin with; it is all founded on excellent cooking skills and genuine passion for food. In its current location since 1988 it is at the slightier less gentrified end of Lavender Hill, it involves a bus or a 10 minute walk from Clapham Junction or from Battersea Park/ Queenstown Road but its worth a trip I promise….

Entering at 7.30 on a Tuesday night, the restaurant was eerily empty as in completely empty. Settling in with a beer and some prawn crackers with a home made dip I was treated to a soundtrack of unmistakeably nineties tunes with a smattering of eighties for good measure but nothing that has seen the charts this side of the millennium. The decor is similarly stuck in time with wicker chairs and vases of dried things. That said I see from her Twitter account that the restaurant is being decorated this week. There is a massive portrait of Nancy brightening up the walls and on the opposite side a plethora of photos of the various guests on her tv show and celebrities who have visited over the years, some yellowing a little but nonetheless quite endearing. I know that makes me a complete hypocrite since I criticised it only a few weeks ago about Mango Tree but here it just added to the family feel of the restaurant. The other thing that added to this sentiment was the number of regulars who appeared over the course of the evening who were all greeted warmly and who made a point of talking to us and telling us which dishes they love and how long they have been coming. Nancy’s family must be doing something right to engender this level of enthusiasm. I hear that the photos also aren’t just from one off visits. Apparently a trip to Nancy’s is a must for the England cricket team when they are down the road at the Oval. 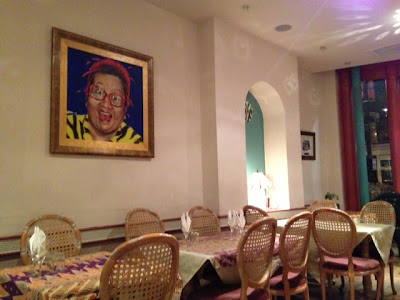 The menu is a blend of various Asian specialities, something I’m usually quite hesitant of (after all if a restaurant claimed to specialise in “French, Spanish and Italian” cuisine this would seem very odd so why any different for Thai/Chinese/Indonesian etc?) As Nancy is known for Indonesian food I tried to steer more in that direction.

P found the menu a little limiting for a vegetarian so I think its fair to say that meat is what Nancy does best. I wanted to get a decent overview of the starters so went for the mixed satay. Consisting of chicken satay, spare ribs, barbecue prawns and achar-achar (indonesian pickles), I can honestly say that every element was utterly delicious. Described as “marinated pork ribs cooked over charcoal with sweet and spicy chilli sauce“, I had been worried whether the sweet chilli sauce would be that of the ubqiuitous orange bottled variety and in many other locations that would have been a valid concern but not here. Slipping off the bone, they were tender but moist and the tangy sauce complemented the rich smoky meat rather than smothering it. The chicken was vying with the pork in the tenderness stakes and the peanut sauce “from scratch” was rich and gloopy with a little Malaysian tang. The prawns had springy, sweet flesh without having gone tough on the charcoal which is a tricky business as those little suckers must take no time at all to cook. The pickles were a great contrast to the meat and rich sauces. 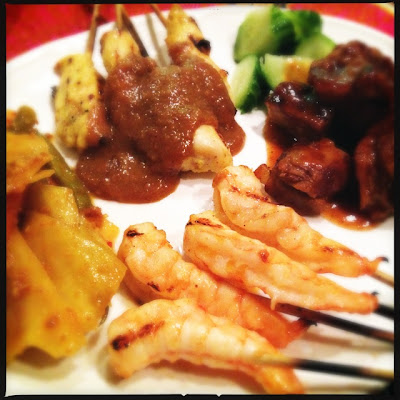 The best bit of all though was the beef rendang. I always forget that a proper rendang should not have a great deal of sauce having cooked down over hours. Aromatic cinnamon and cardamom push through whilst competing with all the other Asian spices and the beef is just fall-aparty on your fork (yes ‘full-aparty’ is a word…) Spicy without sending me over my chilli limit is was beyond delicious. I think it is worth sticking to Nancy’s specialities since whilst the vegetableThai green curry was nice, it wasn’t blow me away nice and probably needed a little more spice. 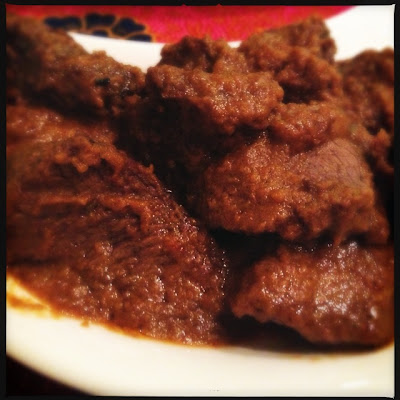 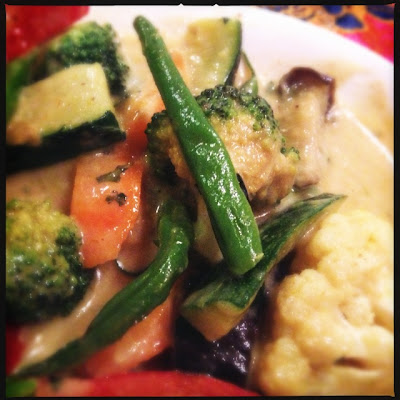 Upon first sight the portions can seem rather small, that said I did leave very full  and couldn’t manage dessert which was a shame as there were things that looked nice.

Nancy’s seemingly long suffering but genial Ghanaian husband Ben was running the kitchen on the night that we visited. I say long suffering because he was roundly berated for coming to talk to one of the regulars and duly sent back down to the kitchen. Nancy’s daughter works as a waitress and behind the bar so it is a truly family business. I can’t write up my meal without a paragraph devoted to Nancy herself. There all sorts of cliches littering the internet; “force of nature” seems to be a consensus and she is very in your face. I can imagine if tourists wandered by they may get a bit of a surprise (unlikely given the location) but if her reputation precedes her then the very loud, chirpy borderline abrupt service is endearing. That said I can’t imagine what would happen if anyone complained about a dish!

The wine list is quite limited and not the most exciting (but as a rule I tend to find this to be the case in many Asian restaurants. I stuck to Singha beer but P ordered the house sauvignon blanc which turned out to be a really pleasant surprise. Not too dry, it was fruity and complemented the dishes better than I would have thought possible. The cocktail list is worth a mention. We reeeally are going back in time here and I was tempted to order just to see if it came with a sparkler and an umbrella. With names like “Luscious Luke” and “Gorgeous Gregory”, they are tropical in content and quite sweet sounding. For example the “Passionate Paulo” consists of “a seductively sweet tart fragrance that oozes passion fruit”.

Although there is a certain air of wistful nostalgia around the restaurant and the tv cameras may have gone away, what is left is a lovely family run, neighbourhood restaurant with a warm welcome and some excellent food with some clearly very dedicated and effusive regulars. Oh and just to top off the 80’s/90’s theme the bill came with After Eights, excellent stuff!