There is such a thing as damning with faint praise and
our experience of Augustine Kitchen was the victim of such by A just
minutes in to our main course when she said with a sigh and a disappointed frown; “oh but I had really wanted to
like this place‘. I couldn’t have put it better myself. I had high hopes. Chef Franck Raymond crossed to the south of the river with a reputation cemented during his time at Mon Plaisir in Covent Garden and a Twitter feed had talked of excellent food and wine suppliers. 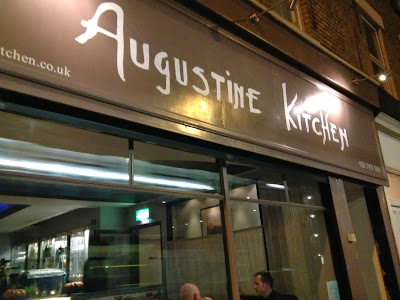 At 7pm on a Saturday night we were the only diners in the main room. By 9pm it
was a third full. At first we felt bad for them as I would love to see a really
good neighbourhood restaurant succeed in this location and if you can’t be busy on a Saturday night just weeks after a reasonably well publicised opening then when can you?  Nearby Buchans has been closed for years and other restaurants near Battersea Bridge seem to come and go like ghosts. “Oh please write them a lovely blog post” A commented looking around and I agreed. Unfortunately the mood
had changed somewhat by half way through our main course.

I started with a cassolette of snails with garlic and parsley butter. What arrived was a very thick, glutinous beige sauce with a strong garlic kick and some little black snails perched delicately on top. The sauce was really very tasty and I enjoyed the dish but it would have been nice to have felt that the snails had been poached in the sauce rather than being a last minute addition. The sauce also wasn’t exactly what I would have described as a garlic and parsley butter but hey ho. 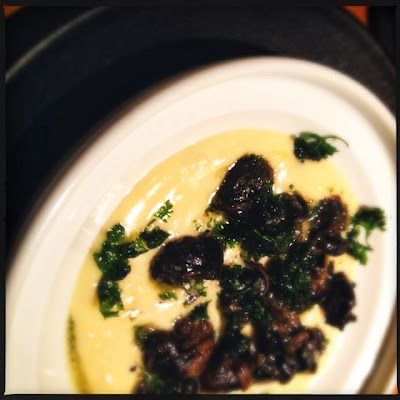 A had a well executed duck terrine with a prune and ginger marmalade. The terrine was very meaty indeed. 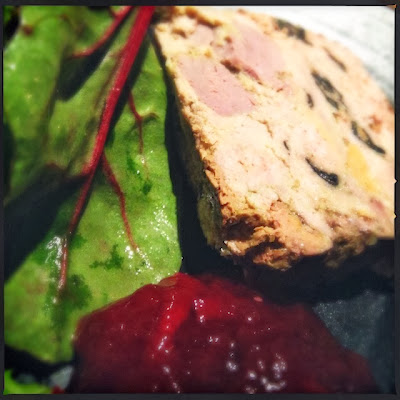 Magret of duck came with a pear poached in red wine and spices and chicon. No carbs on the plate and it was the weekend so a portion of chips was suggested to me and accepted (after all what fool says no to chips?)  The duck was well cooked and served pink but had a very strong flavour to it. I love duck as much as the next man but this had an overly gamey hint, like when a pheasant is hung until just before it rots off the hanging string. 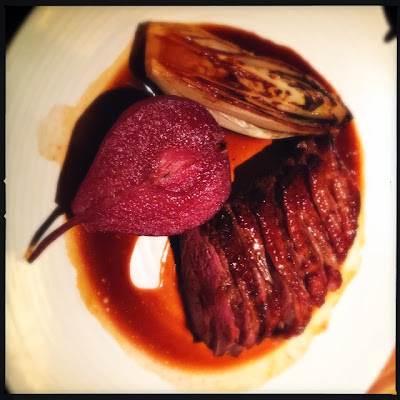 A had steak and chips, the steak being cooked well and meat of good quality (but its no Hawksmoor or Goodman). Perfectly acceptable though. 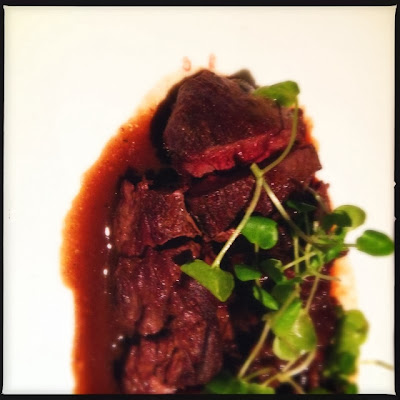 The chips were, to say the least, a disappointment. Rifling through the two metal plant pot things that the chips were served in (are chips ever not served in metal plant pots now by the way?) we were unable to find a single chip that was longer than a 1.5cm. These really were the tiny, scrag end offcuts of a woeful excuse for a potato. Fried to within an inch of their life they were more like those little pointy, salty stick things you could buy for 8p a pack out of the vending machine after swimming lessons in the 80s. 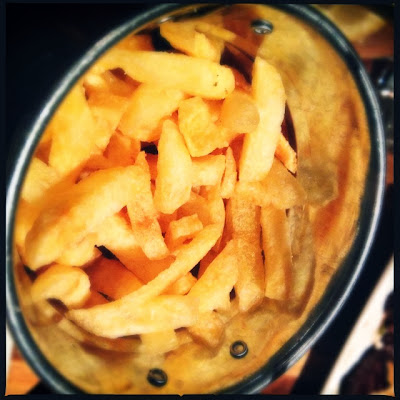 So we did the only sensible thing you could in such a situation and asked for a little pot of mayonnaise. The waiter left. A conference was held, the maitre d’ returned. The response was that “We do not have mayonnaise…………. and we wouldn’t have ketchup either“. OK no mayo, shame but no biggie, but hang on there, why the ketchup comment? What exactly was she getting at with the completely rude and utterly superfluous addition of  “… and we wouldn’t have ketchup either” accompanied by a raised eyebrow and a scarlet lipped smirk?  I didn’t ask for ketchup, I didn’t mention ketchup, I wanted mayonnaise. Furthermore, would it really have been such a crime if I had asked for ketchup, after all they merrily serve steak and (substandard) chips so it would seem like a reasonable condiment to ask for. Or perhaps she thinks herself and her establishment as being above mayonnaise? There’s no other word for it, its just downright bitchy. Being a bitch to your customers is perhaps not an ideal way to garner popularity or future custom, it should be rule 101 in the basic manual to running a restaurant.

There seems to be a polar difference between self perception and reality in this place. You offer 2 course for £9.95 lunches and boast on Twitter about being the cheapest in the postcode but you’re too good for customers who politely ask for mayonnaise? It may have been a condescending attempt to belittle me as a diner but I see it as more of a reflection on them and
their over exalted view of their establishment. Ultimately you’re a little neighbourhood brasserie on the Battersea Bridge Road surrounded by high rise council blocks. Get over yourselves. Oh and finish decorating the women’s loo too. 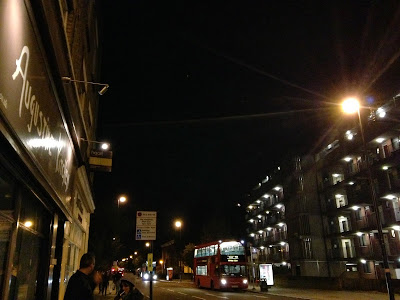 Despite the main course fail, I can never say no to tarte tatin. On the positive side this version was excellent. A
classic French dessert executed to perfection. The apples were buttery and soft throughout held together with their caramel coating. Worth noting though that it was dish of the day so might not always be available. 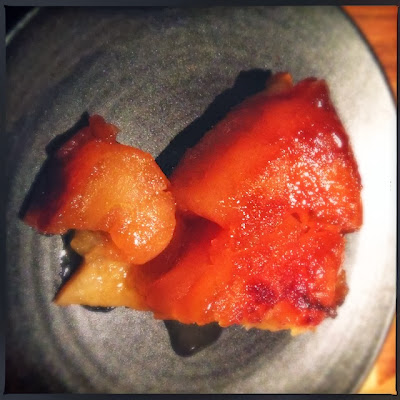 Dark chocolate mousse was less
of a success, more milk chocolate with a central core of whipped cream topped
with dark chocolate shavings and berries. Not bad but not excellent either and another case of not being what was described on the menu. 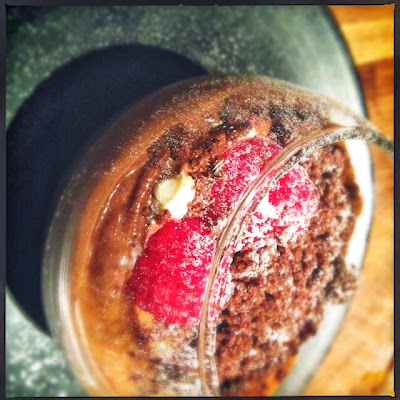 So whilst some of the dishes are excellent, others are very hit and miss. Combine that with running the gamut of the maitre d’s claw sharpening comments and I don’t see any reason to return. Whilst another decent neighbourhood French would have been nice, I’d rather have a steak round the corner at Butcher & Grill or a burger at the Drafthouse, served with a smile and none of the attitude.