When you think of good old fashioned American desserts its often a cherry pie that springs to mind. Or apple, although thats been tainted somewhat by American Pie the movie, but nonetheless its what you dream of when you think of pie; sweet juicy deep filled fruit in a crumbly, buttery crust. So why is it so hard to find good pie in New England?! Rainbow Sweets was recommended to us by a kitchenware shop back in Vermont’s state capital Montpelier as a good stop for lunch and particularly for pies. Located in small town Marshfield on Route 2 somewhere between Montpelier and St Johnsbury it is quite inconspicuous. 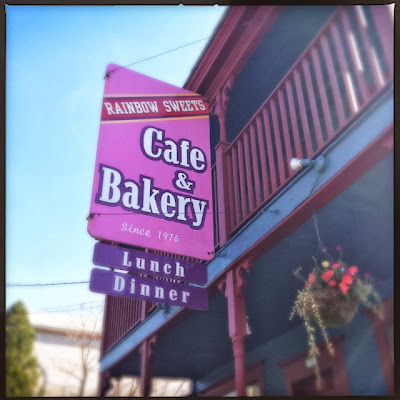 That low-key nature ends the moment that you walk through the door. Its charismatic owner Bill prides himself on not making anything American. “None of those cherry or apple pies” apparently which was, at first, disappointing as we had arrived on a quest for exactly that, a cherry pie to take to dinner as dessert. As we were hustled over to the counter (‘come closer, no even closer still….’) to hear what was fresh out of the giant iron stove for lunch, this didn’t seem like a problem any more. 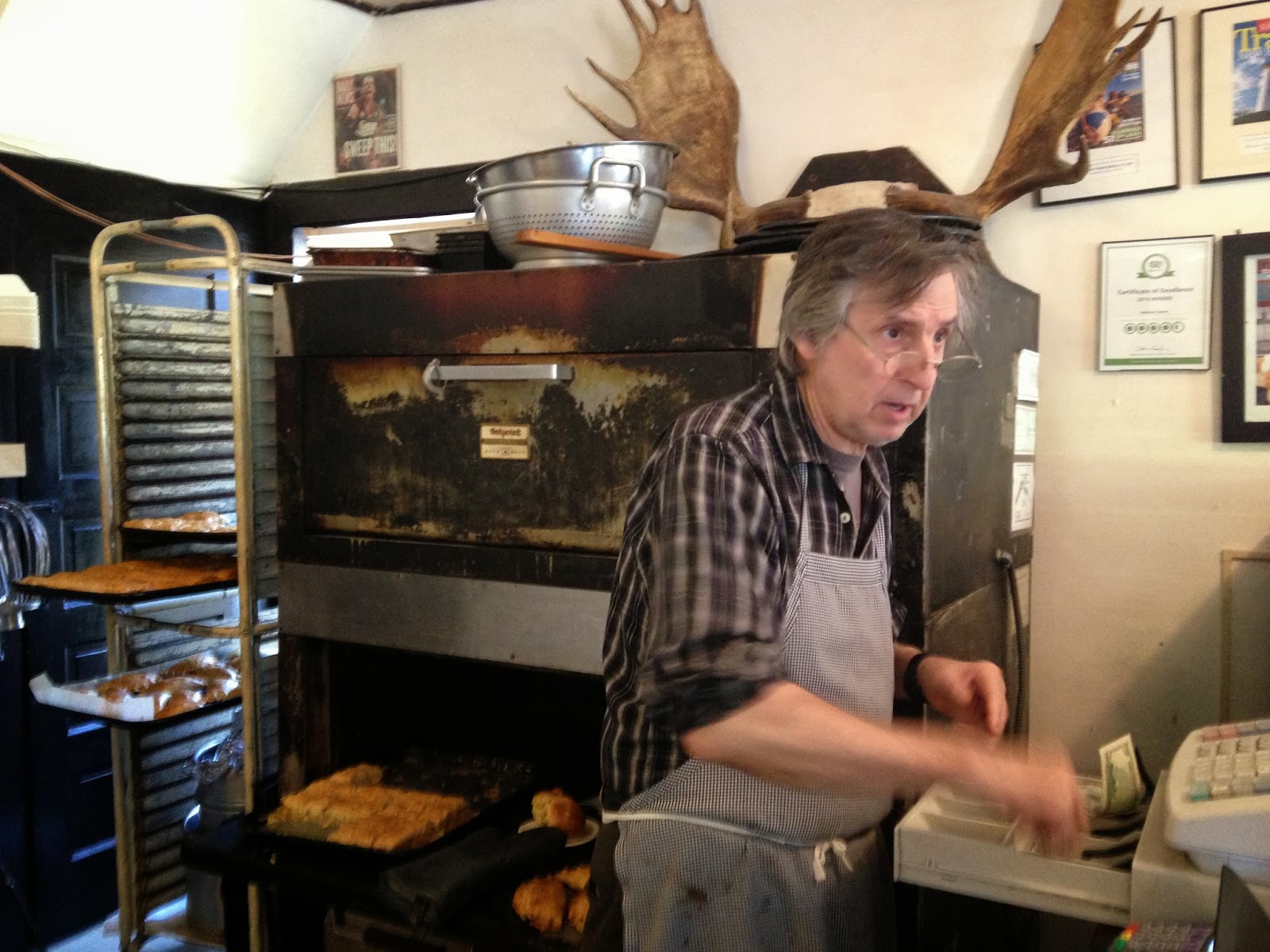 On offer on the day of our visit was spanikopita- greek filo pastry slices and a filling made of “spinach so tender its pubescent, no pre natal…”- Argentinian empanadas of beef or Moroccan b’stilla of cinnamon and clove spiced shredded chicken were the other two savoury options. Both the empanadas and the b’stilla were delicious, encased in perfectly crispy, golder outer shell of pastry and tender inside. Considering that I’m not a rabbit food eater, the accompanying green salad was also excellent, with crumbly feta and dark purple olives adding a salty bite to well dressed salad leaves and tomatoes. 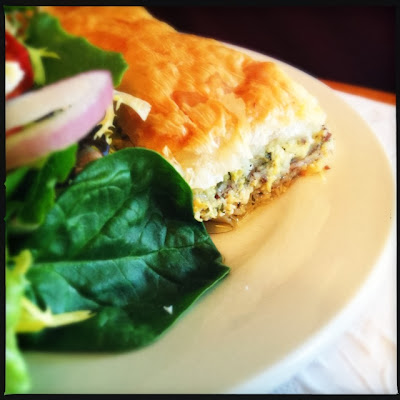 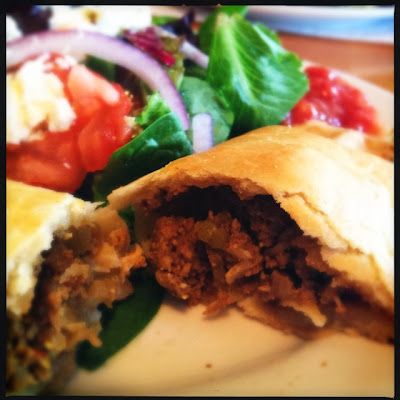 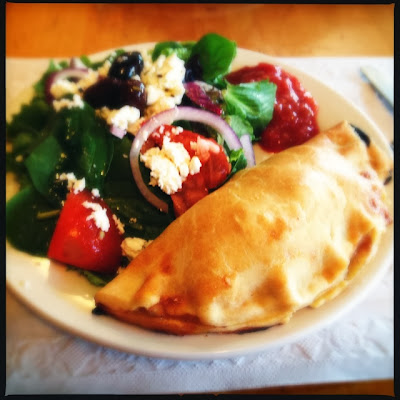 We were recommended (well commanded to have was probably closer to the truth) a pair of ‘Johnny Depps’.  Consisting of two choux profiteroles stuffed with crème patissiere, they are then dipped in caramel and- once hardened- placed on a bed of puff pastry and sweetened whipped cream. Sharing your Johnny Depps is apparently ‘cheating’ and results in very public castigation, we split ours when Bill had his back turned and the other diners promised not to tell. 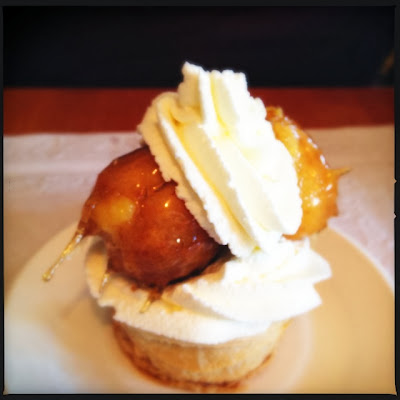 Bill’s jovial and upfront demeanour was infectious amongst the diners and only one miserable looking, skinny girl in running kit failed to crack a smile or join in the banter (what she was doing in a bakery to begin with frankly eluded me). 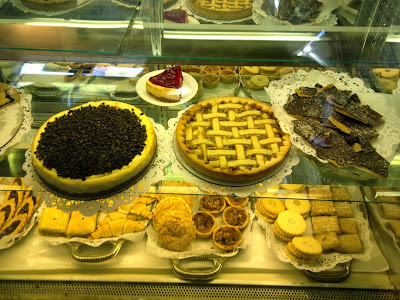 Drinks are predominantly local offerings whether beer or juice. We opted for apple cider which was a dark caramel colour but much lighter in texture than we expected. In apple country ‘cider’ refers to any juice made from apples whereas ‘hard cider’ is the alcoholic version so you can expect to see small children drinking ‘cider’ without any eyebrows being raised. Technically they do do apple pies by the way, just Austrian style with a streusel crumb topping. We took two small ones away with us and they were excellent.

You might think that its just a nice little bakery in a tiny Vermont village but it seems that Rainbow’s fame has spread far and wide. A New York Times article from 1999 praises the Cherry cheese danishes which apparently come out of the oven at 9.15am every Sunday morning and are inevitably sold out by 10am. Indeed, we arrived for an early lunch and were out of luck.    Apparently people drive all the way from Boston to buy a box, a good 2.5hr trip each way.


Bill started out as a builder whilst his wife was a trained pastry chef, perhaps explaining the reasoning behind the distinctly European flavour and style to all the dishes. The tables have turned now however, and it is Bill who oversees the ovens.  If you’re ever anywhere near Montpelier in Vermont, please go, I promise that you won’t regret it.