With the sun blazing as we flew along the deserted US Route 1 hugging the coastline all felt well with the world. Quaint little fishing towns dotted with seasonal scarecrows and halloween decorations. 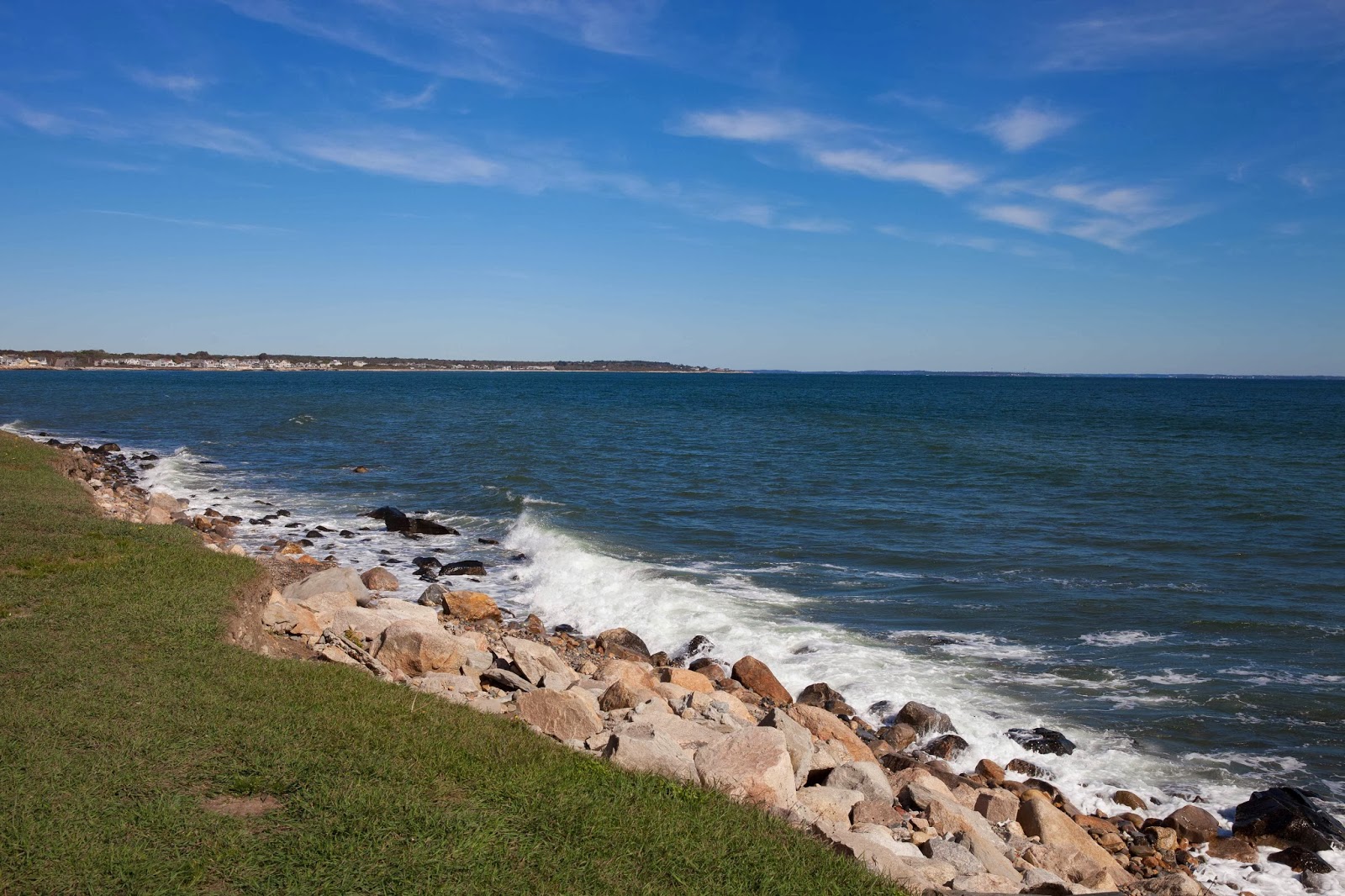 How can you not like this place? See, here’s a picture of a scarecrow with his pumpkin butt cheeks a-pokin’ right out: 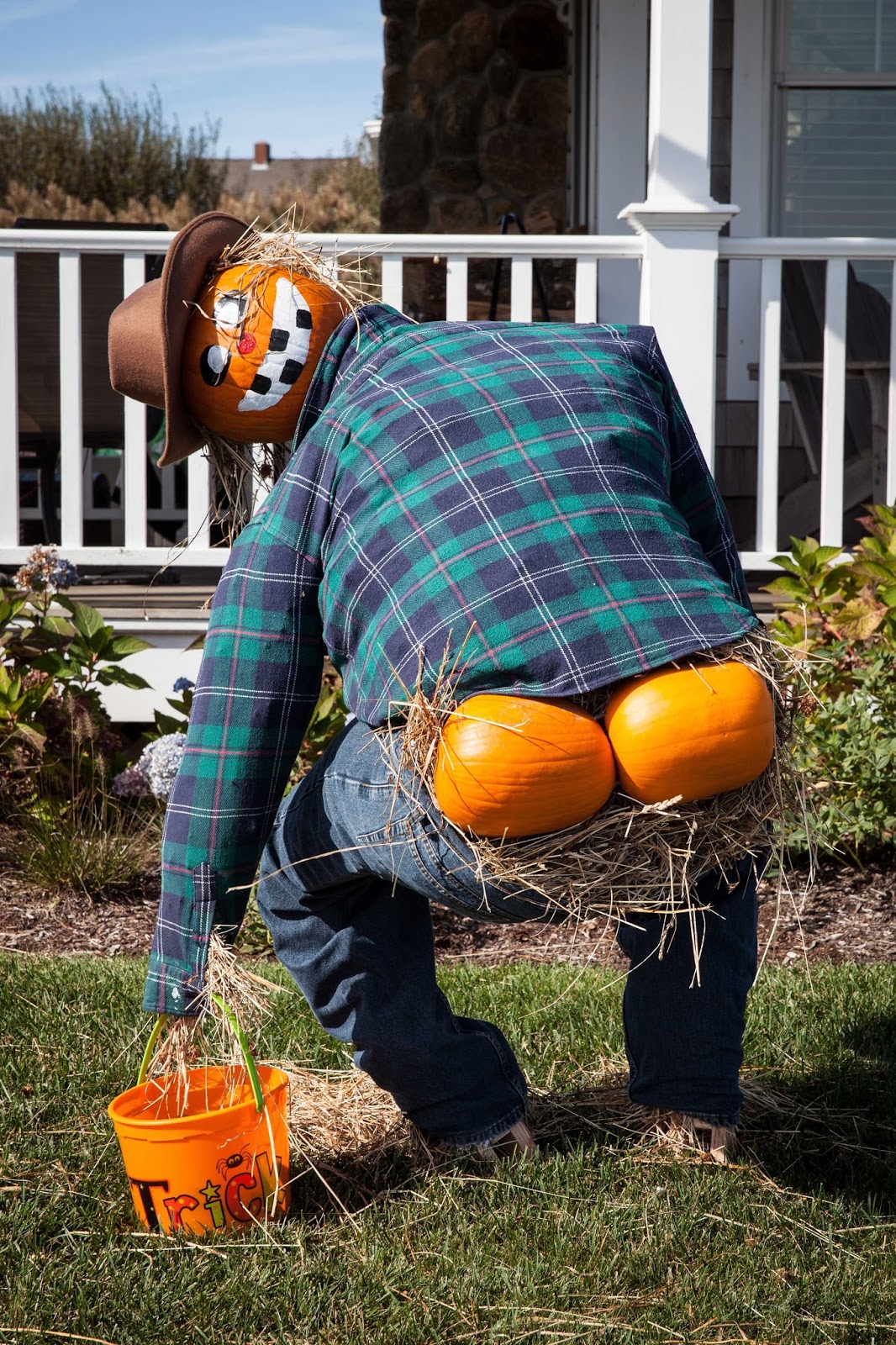 Why it was all so puuuurrrddy it could have come straight out of a film. Oh but hang on, what’s this town I see on the road ahead of me? Mystic. Don’t I know that from somewhere? Yep cheesy as hell (in more ways than one) but one of those things that almost has to be done however much you hide your grimace through a smile; a visit to Mystic Pizza.

Upon walking in to the restaurant, if I hadn’t known about the film I would have done immediately due, perhaps, to the fact that it is being played on a loop on a giant plasma screen tv in the lobby. The walls of the restaurant are plastered with screenshots of a toothy grinned, bouffy haired Julia Roberts staring out at diners as well as the obligatory Americana found in diners and pizza joints. 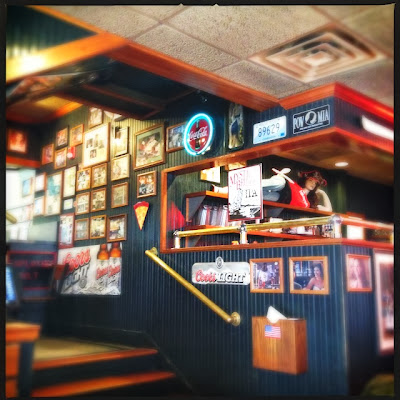 On a week day lunchtime it was busy but still no hassle to get a table. Forgetting for a brief moment that everything is bigger in America, we ordered one small and one large pizza and regretted it pretty much instantaneously when the order arrived. Huge. Enormous. Vast. But good. The dough is not deep, deep pan but is on the doughier side of things than a thin crust. Hand tossed in house before toppings are added we went for two options. Texas chicken barbecue was nothing novel or innovative but a tasty classic. The house special consists of pepperoni, meatball, sausage, green peppers, onions and mushrooms and we added some gorgonzola to sate my blue cheese craving. That combined with a ton of mozzarella gave stretchy, stretchy cheeeeeeeese……. 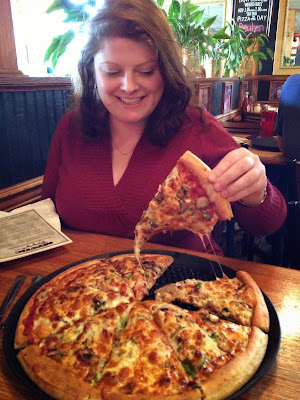 I never fail to be impressed by the refilled-before-you-get-to-your-last-slurp bottomless sodas that you get in the States. It shouldn’t be that impressive but I don’t think I’ve ever been anywhere in the UK that offers them which is unfortunate considering a pint of Coke costs about 6p from a pump. It is inevitably about 3 quid a pint these days. H went for a Mystic Bridge IPA from the Cottrell Brewing Company, a micro brewery founded in 1996. They offer three permanent beers as well as a couple of seasonal specials.  The IPA was pretty light with a lemony fruit hint to it and a decent accompaniment to a sunny pizza lunch. You know you’re on holiday, thats for sure. You can take a detour to the brewery in nearby Pawcatuck on Friday and Saturday afternoons for a free tour and tasting or to “fill your growler” (apparently a growler is a large drinks container in the US, for any Americans reading; this is another term that doesn’t mean the same in the UK; get googling…..) 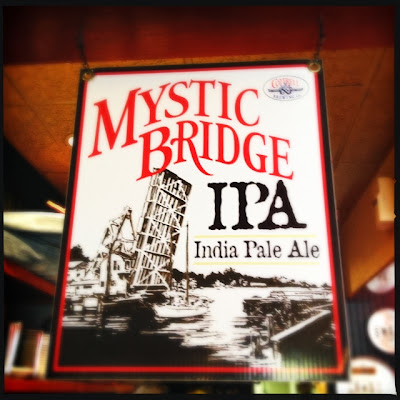 Its not all about pizzas though. They also offer salads, soups and grinders (some kind of sub baguette thing apparently, to me it brings to mind Grindr and sounds totally different to a UK girl). I’m not sure I would use the film’s “Slice of Heaven” slogan to describe my lunch but it was jolly tasty all the same and a reasonable price. 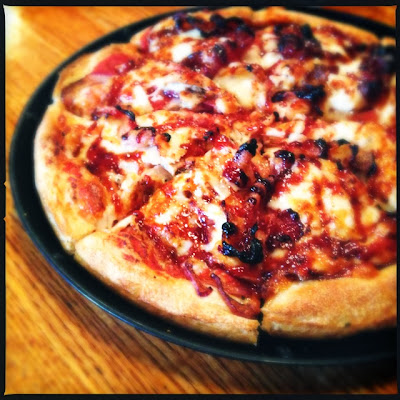 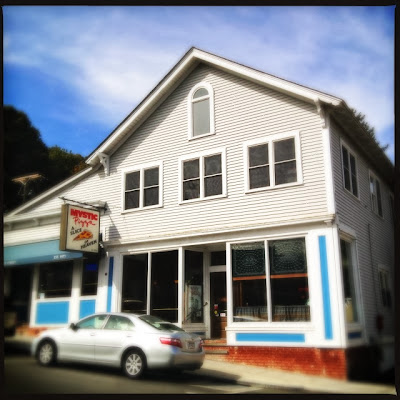 Mystic itself is also a really pretty town for a wander and a great stop off point as you drive along the coast between more major towns. But the road is calling us if we’re to make it to our overnight stop of New Haven. Home to Yale University, its about as close as the US gets to the dreaming spires of Oxbridge. Well, that was the picture that I had in my head but it seems as though New Haven pretty much IS Yale. Its not even big enough to have a branch of Gap for goodness sake. 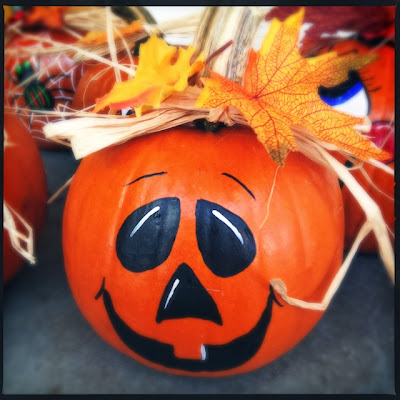 We arrived in New Haven late afternoon with slightly more grand ambitions of a wander round Yale, couple of cocktails then dinner at Box 63   . The online menu had me salivating and I’d fully planned out ordering truffle parmesan fries with a pulled pork sandwich and lobster mac and cheese but not everything goes to plan, even for a control freak like me. Sorry Box 63, you look fabulous but you got usurped.  A couple of minutes from our hotel (The New Haven Hotel – well located, perfectly comfortable and free cheese and wine in the early evening) we came across Owl Shop on College Street. From outside it initially looked like a cafe and then like a shop. It was only when we were on the threshold that the aroma of cigars wafted gently across the sunny evening breeze. Owl Shop transpired to be one of the oldest cigar stores in America. Opened in 1934 by Greek immigrant Joseph St John, it expanded quickly to five outlets.   By 1951 they had merged all the stores into the present day College Street store and even after the death of St John one of the original employees is still with the store now (Joe Lentine) albeit under the management of the store’s second owner Glen Greenberg. The current staff are all lovely and very patient with cigar novices.

Dark inside with wood panelling and acclimatised humidor cabinets containing over 400 varieties of cigar, it is a welcoming location.  A decent cocktail list invites you to stay a while and the heady scent of cigars tempts you to try the wares. As strange as it seems after years of the smoking ban in the UK, smoking cigars is quite acceptable inside in this bar.

I’m no cigar expert but I’d always worked on the basis that Cuban cigars were the best and other countries’ offerings paled into insignificance. How wrong was I ?! Most of the main cigar manufacturers like Davidoff, Partagas and Cohiba all have Venezuelan or Nicaraguan outposts and they are a lot cheaper than the Cuban equivalents. I’m not enough of an afficionado to tell if the price differential is worth it for Cubans but for my level of knowledge a Venezuelan one was good for me. Coupled with an Old Fashioned and it would take a small natural disaster to move my butt. 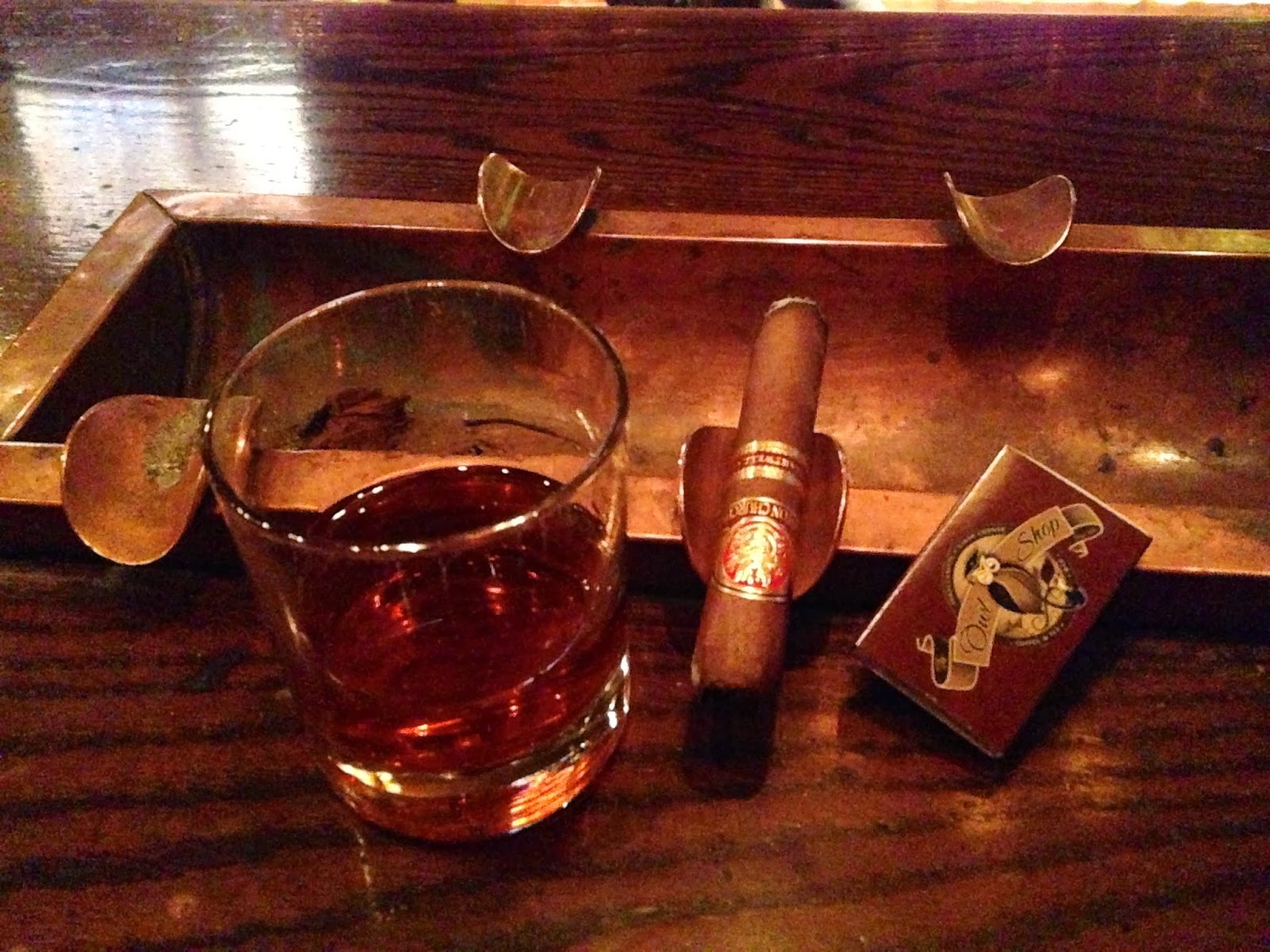 We did still keep meaning to go for dinner honestly but the evening started taking a wiggly winding course through the cocktail menu and before we knew it it was 9.30pm. Owl Shop offers a limited menu of paninis and charcuterie that is more prevalent during the day and sparse at best at night. No problem though, Owl Shop suddenly became the best venue in the world when the waitress actually suggested we go out and get takeaway from Shake Shack and bring it back to eat. As H returned from Shake Shack laden with burgers and wiggly fries, a Blues group with an excellent singer struck up and I don’t think the evening could have been much more perfect.

Breakfast the following day before crossing the state border back up into western Massachusetts? Why cold pizza of course! 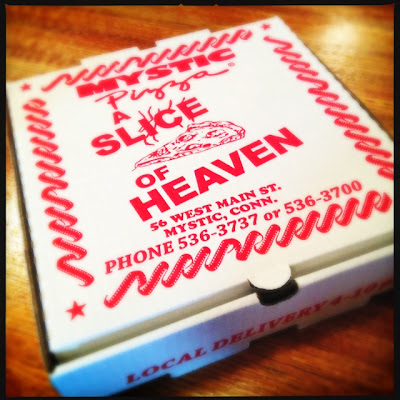