As we zoom towards the end of 2013 and I think about the traditional new year health kick, perversely my head always reviews all the lovely things I’m going to miss until the inevitable point where the diet snaps and some kind of feast ensues. This year my mind keeps wandering back to the US and a plethora of burgers. I haven’t yet paid a visit to either of the new(ish) Five Guys or Shake Shack UK outposts located in Covent Garden – in part perhaps due to my enduring apathy for queuing to be allowed to buy food. A bit of a Google search shortly after their launch revealed a multitude of frankly adverse comment across the internet which I found doubly surprising after visiting both chains in the US. Either the spark of something that makes them adored in the US hasn’t made it over the Atlantic or London has been spoilt on the burger front in recent years. Whichever it is my experience of the modern day American forefathers of burgerdom chains was anything but bad.

As you may have seen in a previous post on here, my baptism by Shake Shack did come in the middle of a whisky and cigar session in downtown New Haven so the first outing needs to perhaps be taken with a pinch of metaphorical salt in that I thought it was all AAAWWWWWESOME. We ordered one SmokeShack and one double ShackBurger. The ShackBurger consists of a burger (or two if you go double) made of a combination of seasoned sirloin and brisket giving it a moist but textured feel. Its then drenched in that oozy, gooey, yellow American cheese,  tomato, lettuce and Shacksauce. The Shacksauce is, of course, a secret recipe but is mayo based with a good dose of mustard in it. The SmokeShack is the same as the ShackBurger but with the addition of applewood smoked bacon and spicy cherry peppers. I had thought I would naturally prefer the SmokeStack, after all its got bacon in it and everything is better with bacon. It was a bit too spicy for me though and the flavour of the peppers was overpowering the meatiness of the burger.

A single was $4.80 and a double $7.40 which seemed like very good value especially compared to London burger prices. Wiggly fries were nice and fluffy on the inside and fried to a perfect, golden crisp on the outer. What’s not to like? To be honest had it still been open when we staggered out of Owl Shop I’m convinced we would have gone back for seconds. 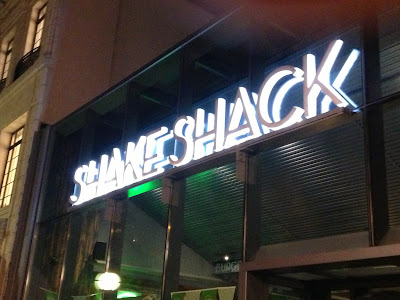 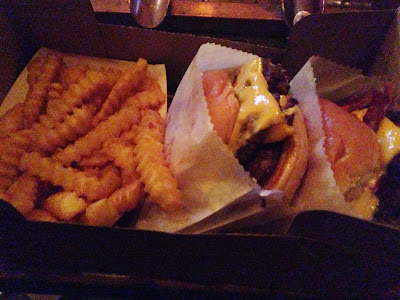 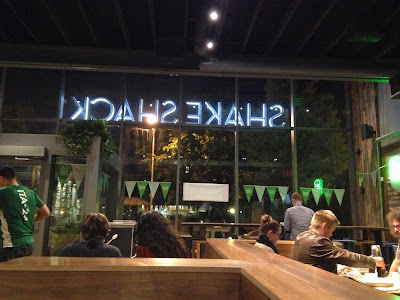 We hit Five Guys in Burlington Vermont on a Saturday night after a brewery visit. Located outside town on the Route 7 Shelburne Road on the outskirts of Burlington, its nestled in an out of town shopping area of the type you’d expect to find a Frankie & Bennies or TFI Friday in the UK. 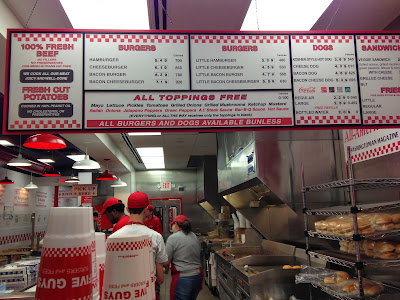 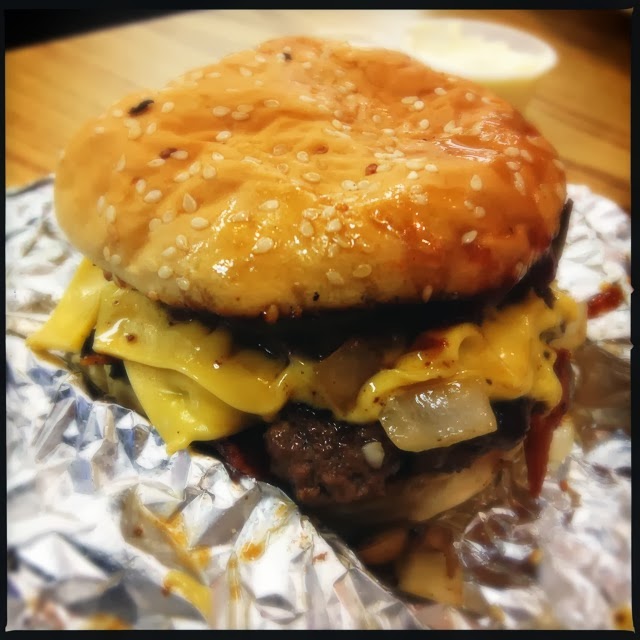 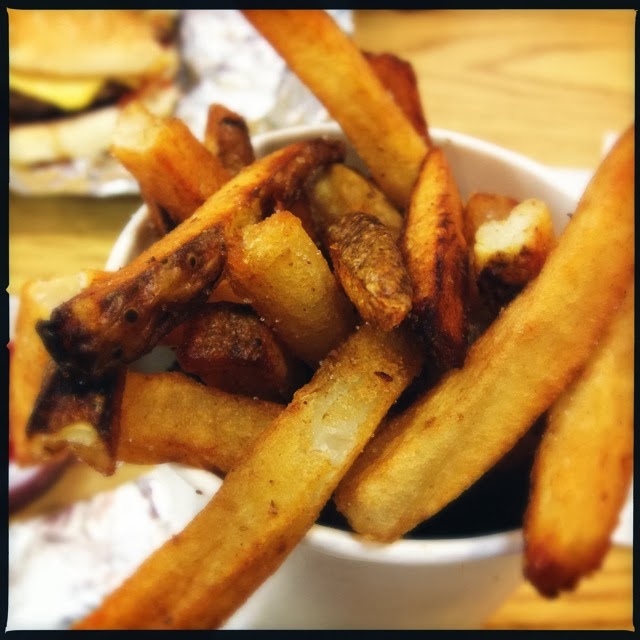 One of the big plus sides of Five Guys is that you can pick as many or as few toppings as like for no additional charge. You know your burger is being cooked to order and there is no fishing out bits of limp lettuce or tepid tomato that you don’t want. I went for grilled onions and mushrooms but you can add all the usual pickles, tomatoes, peppers and sauces. At just over $7 its decent value for what is effectively a double burger. That’s one thing that is worth noting. Five Guys offer either a burger or a little burger. Most of us would assume that a “little burger” is the kids option or at least for ladies on a diet but it is realistically what most of us would consider to be normal. A single large patty whereas the standard is two large patties, all good but huge!


Skin on fries have a great texture but are veering towards too salty. We left about half of them and drank copious quantities to wash away the salt. You’ve also got to be a bit careful if you’ve got a nut allergy as the fries are cooked in peanut oil.


The soda machine is also something of a novelty. You can have all the basics like Sprite, Coke and whatever other drinks the Coca Cola Company offer but then you can also have what I presume is a flavour syrup added which results in crazy combinations like cinnamon Sprite or cherry ginger ale. I’m not sure that this is ultimately a positive contribution to the world of fizzy drinks but its good fun to try out as many stupid drinks as you can.


Due to the level of inebriation preempting our first Shake Shack experience a decision was taken that in the interests of a fair scientific analysis we should find another Shake Shack and sample it sober. This led to our driving round and round the suburbs of Boston on the final day of the trip searching for 49 Boylston Street. Anyone who has ever visited Boston will know that Boylston Street is extremely long and one of the main streets in the city. Home to all the major designer stores and hotels, its almost impossible to miss. So 49, Boylston, in the heart of Theatreland just off Boston Common, surely just the sort of location Danny Meyer would be aiming for. But no. Its 49 Boylston Street Chestnut Hill on the outskirts of Boston just beyond Brookline. Into the sat nav it goes and a 15 minute drive later we arrive. Outside a residential house. No, it turns out that there is a third 49 Boylston Street in Greater Boston. This time in the middle of a shopping mall/parade that is still mid construction. I’m sure it will be a great location in an affluent area when its finished but it does beg the question whether Mr Meyer thought he was getting the downtown address….


Working up an appetite with our map reading skills (and racking up almost a tenner in data roaming charges to find it) we arrived at Shake Shack, Boston. What followed may have possibly been the most yellow meal ever known to man. Admittedly this is our fault for requesting no lettuce or tomato and for ordering yellow drinks but it did make me laugh. 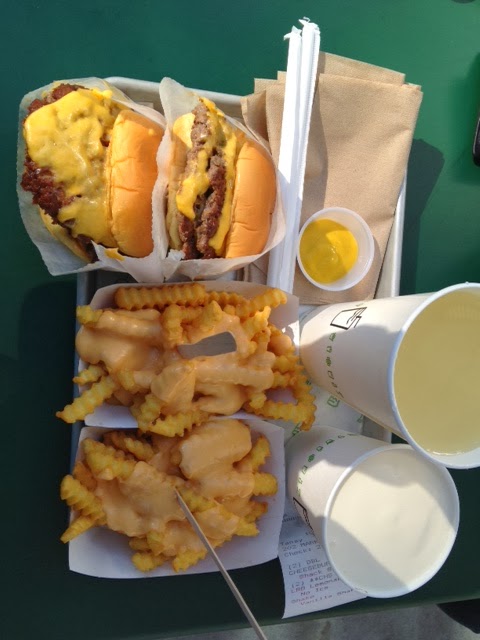 As childish as it is, I love the wiggly fries that are standard at ShakeShack and they are even better with a smothering of cheese sauce.  I still haven’t tried the fabled frozen custard. I’ll leave that for London.

So ultimately whilst both brands have a place and I wouldn’t turn my nose up at them, if I had a choice between the two, Shake Shack wins it. There’s a significant chance that you may find me queuing up in Covent Garden at some point in late January when the diet goes wrong- see you there….