A lot of people have been muttering recently about Tooting being the next Dalston or similar and, as much as this seems like a stretch for Tooting at the moment, there is definitely change afoot. Whilst he didn’t mention Tooting by name,  Alex Proud summed this London phenomenon up in his Telegraph article last week on the “Shoreditichification” of other London boroughs.  Emerging from Tooting Broadway tube you carry on down the road passing all the lovely Southern Indian and Sri Lankan curry houses – which are well worth a visit another time- for a few more minutes in the direction of Colliers Wood.  Its further than you expect.

Let’s be upfront about this. Chicken Shop is the Soho House group jumping on a surfboard and the joining a tide of other street-food-gets-a-home outlets ebbing their way across London on the crest of a casual dining wave. Chicken Shop is a massive cliche of all the current “must haves” of the London restaurant scene at the moment. No reservations? Tick!  Carefully decorated then deconstructed industrial decor? Tick! So dark you can’t properly see what you are eating? Tick! Only offering one main foodstuff in a small range of permutations? Tick! How can it fail?


In addition to the Tooting branch, the first opening still resides in Kentish Town. Expect many more to roll out in a neighbourhood somewhere near you soon.

Yes, its all rather painfully hipsterish from the chipped blue rimmed white enamel plates to the carefully distressed furniture you snag your tights on, to being served wine in the glass tumblers that you used to get water in for school lunches. So why did I like it so much? The chicken is fundamentally just really good. I’ve never been a chicken person. People will regale you endlessly about the joys of the perfect roast chicken on a Sunday and whenever man flu strikes its all about the chicken soup. I’ve always been a bit baffled. The humble chook had never hit that comfort food spot for me. Chicken Shop’s offering was therefore something of a revelation. Succulent, tender chunks of a chicken infused with an intense, savoury, lightly spicy rub that permeates the flesh and makes it impossible to leave any of the skin despite your best intentions.  To steal a rather more insalubrious chicken outlet’s slogan; “Its finger lickin’ good“. Only here it really is.

It is also something of a dream for the indecisive. Decision one; quarter, half or whole. Decision two; smokey or spicy sauce. My experience was that both are on the hot side, the deceptively named “smokey” packed a whopper of a punch that had my eyes watering a little so go sparingly if you’re not a chilli monster. 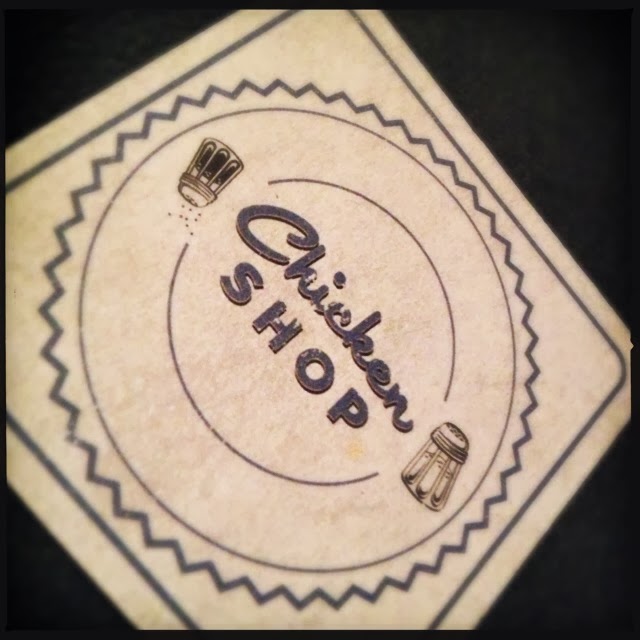 All side orders are £4 each and served in those enamelled bowls. Corn on the cob was a real highlight. Lightly chargrilled and shiny you then have the option of adding lashings of garlic butter poured over the top. Of course you do, as if you wouldn’t. You get three half pieces of corn which, if you’re sharing, leads to an almighty battle over who gets the last bit. Crinkle cut fries are good and coleslaw not too heavy with a sweet bite.  The only thing I didn’t try was the butter lettuce and avocado salad.

So what do you wash all this comfort food down with? On the wine front there are three options each for red, white and rose listed on the menu as House, Decent and Good. This is the first indicator of how unimportant is to the Chicken Shop offering. The second was upon asking the waitress what the wines were I was told only a grape. It took some more digging to find out which particular corner of the planet grew the grape in question. The “Good” red was an Argentian Malbec and the white an Australian Chardonnay. The others were neither memorable nor things that I would contemplate trying. We opted for Malbec and it was a pretty standard offering. Big red fruits, bit of pepper, pretty easy drinking. I can’t  give you any more detail than that though as  I have no idea what sort of Malbec or from exactly where within the country in question as it was served in an enamelled jug . This is more my problem as a wine obsessive than it is their issue, perhaps sticking to a bottle of beer is the best plan.  I did spy a ginger beer flying past my corner on a tray so I’d be tempted by that next time.

In some ways we did rather regret getting a whole chicken between two (I think that its ideal for three) as it meant not enough tummy space for dessert. This was a travesty since, although its a quite basic list of options, they do look good. Apple pie was served to people from an enormous pie dish at the table and you could pick how much you wanted. Lemon cheesecake or chocolate brownie were the other two temptations so in effect all popular bases are covered.

My main complaint is the fact that it is so dark. Unnecessarily so I thought. No photos for that very reason other than of a beer mat that A thoughtfully half hitched from the bar “so you can at least take a picture of something later“. Even the outside isn’t illuminated so you haven’t even got a shot of that. In fact the people walking down the road behind me assumed it was closed it was so dark.


Reading back over everything I’ve written it would be easy to think that I really didn’t like the place. Sure, there were plenty of things that meant it wasn’t a perfect experience but I will be going again and would definitely also be getting regular take out if I lived a little closer. The fat. juicy, flavoursome chicken makes it all worthwhile.

There is only so long that you can eat chicken for, especially when a ravenous queue is filling the standing space around your stool hovering like vultures waiting for you to wipe your mouth with a napkin and sit back with a sigh before performing the international signal summoning the bill. We therefore found ourselves back out in the cold night air at only 8.15pm so cocktails were required. Although Tooting is changing its ways there still aren’t that many places offering decent cocktails so we headed to Graveney & Meadow.

G&M used to be A Bar 2 Far which was an apt name on the basis that it was rough as hell and a night out would definitely have gone too far if you ended up there which thankfully I never did. What Bar 2 Far’s former inebriates and ne’er do wells think of Graveney & Meadow is unclear as they are were not around on the Friday night that I visited. You can create a trendy looking London bar anywhere it seems but you can’t quite take the Tooting out of it as we still had to have our bags searched for concealed weapons (I felt for the poor chap as I think my gym kit probably ought to classified as a weapon).

The standard mismatching furniture is everywhere to be seen and there is something of a sewing theme going on; some of the tables actually are vintage sewing machines. In fact “vintage” was probably the key word at the top of the mood board when the Antic Pubs designers went to town on this one. plenty of exposed brick and antiqued metal ceilings with the remaining walls covered in flowery Cath Kidstonesque fabric which I think had been painted with tea to give it that oldy worldy ‘people smoked lots in here for years before the smoking ban’ look. Sure enough at the corners you could see the bright white fabric poking through from underneath where the decorator’s tea brush had not reached.  The walls to the loos are covered in shoe moulds and bits of tailors pattern’s and equipment and a hotch potch of anything vaguely “East London tailor circa turn of the 20th century”.

G&M isn’t only a pub, its also a tapas restaurant at night (not tried the food yet, I was too stuffed with chicken) and a bakery too. The baked goods are all displayed on a table and you pay for them at the bar. It was quite WI market but is very appealing to the daytime Mum’s coffee morning crowd I expect. After a couple of cocktails I did get tempted by an Ottolenghi style giant meringue. I tried to buy one to take home but it turned out they are “for display only”. That summed things up pretty well for me.