Last October during a road trip around New England my Shake Shack cherry was well and truly popped by visiting both the Boston and New Haven restaurants. To say that I was effusive with praise is maybe an understatement. I was therefore keen to try the newish London outpost despite the bad reviews that proliferate the internet.

Despite my enthusiasm for hot beef and cheese, I’m really, really bad at queuing. I don’t mean in a European, all elbows in a crowd and not knowing how to stand in a straight line ‘bad’ kind of a way but more from an impatient, rolling eyes, stroppy perspective. There was therefore not a cat in hells chance that I was going to be amongst those initial lines snaking their way through Covent Garden when Shake Shack London opened back in August 2013. Does that mean I’m a bit behind the curve? Definitely. Do I care? Definitely not.

It is also not just one queue that you embark on at Shake Shack. You queue to order then once you have your green plastic ordering gadget you queue to be allocated a table then finally once the gadget starts buzzing and flashing like a lost and demented alien you queue yet again to collect your food at a different hatch.  There are nice touches like the fact that a Shake Shack employee carries your tray to your table for you making you feel as though there is a dollop of customer service in the mix but all the above means that its not anything approaching a high end experience. 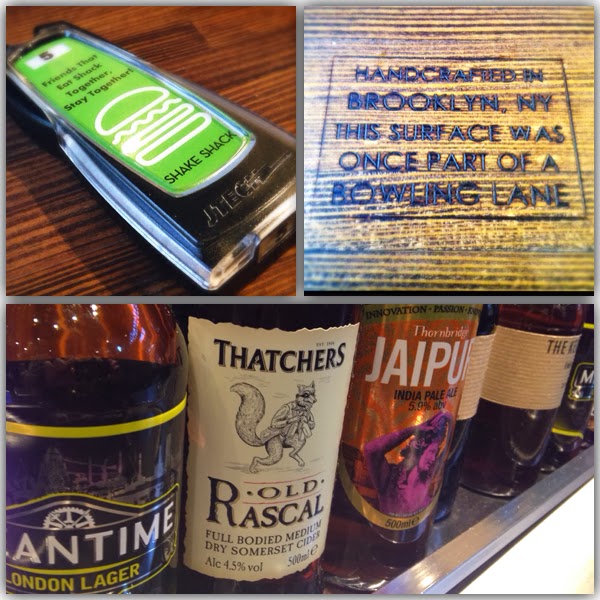 Strange then that there are things Shake Shack do to try and convince you that it is high end. Putting Chassagne Montrachet on the wine list for example although you’d have to be slightly bonkers to order it so I steer clear.


As with most outings my attention veers quickly to booze once I’ve an inkling what I’m eating. Shake Shack is unusual for burger joints in that it even has a wine list at all.  The house wine is a little on the rough side. I’m talking so rough that I couldn’t even finish it which is virtually unheard of. Frog’s Leap Merlot, fizzy on the tongue and with overripe red fruits. I’m pretty confident that this is the wine Miles was talking about in the film Sideways and to misquote him; “I’m not f*@ing drinking this Merlot” either. On the upside, full marks for the plastic cup with funky thumb indent, if you do have to drink your wine out of plastic then this is a pretty good way of doing it.


In all honesty I wish I’d given the wine a miss (and I NEVER say that) and stuck with the Fifty/Fifty; a mix of half iced tea and half homemade lemonade. Really light and refreshing and perfect with a greasy burger. 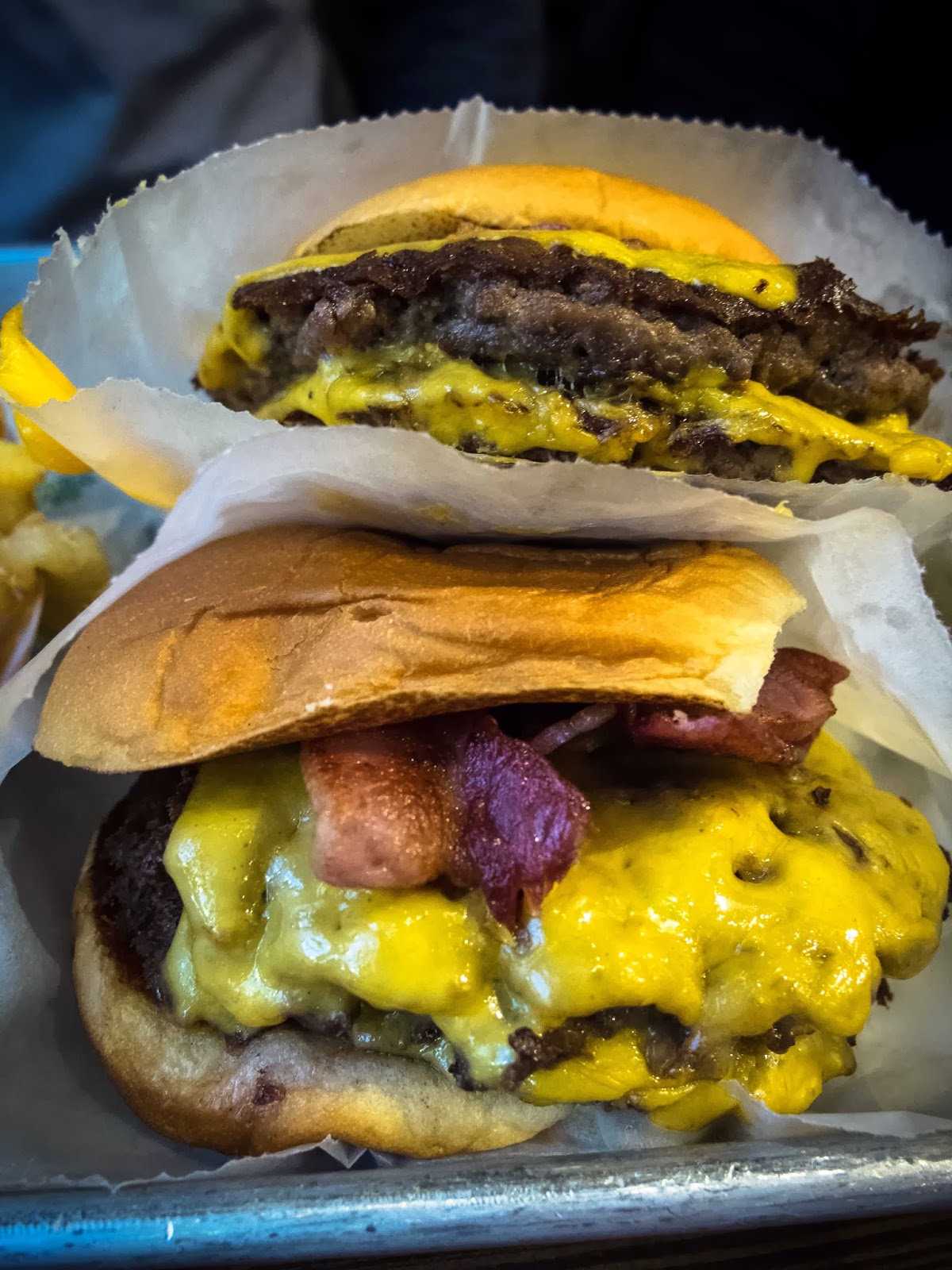 So, what about the all important burger? Very good,  but no prize winning rosettes here I’m afraid. Maybe its because I went for a single compared to the doubles that I enjoyed in the US but I found the actual burger a little drier and crumblier in London and less well seasoned. It is still definitely superior to McDs or Burger King but its not reaching the heights of Meat Liquor or Patty and Bun. I think where the difference lies is that this feels like next level fast food as opposed to being a restaurant.


We decided that it was the bun that was giving it the McDonalds type taste; it is that sweet, bleached flour, springy loaf texture as opposed to the good sort of sweet brioche type burger bun.


Cheese crinkly fries were just as good as those in the US although they were a bit stingier on the cheese sauce front. They still rank as some of my favourite ever burger joint chips though. Crispy, golden but fluffy in the middle.

Each branch has its own local take on “concrete”. Concrete is, in theory, essentially posh McFlurry and by posh I mean very posh. Made with proper ice cream custard instead of the vegetable fat ice cream that most fast food places use, the Union Jack was chocolate frozen custard blended with chunks of St John bakery chocolate brownie and shards of Paul Young dark chocolate and salted caramel. It was utterly delicious. 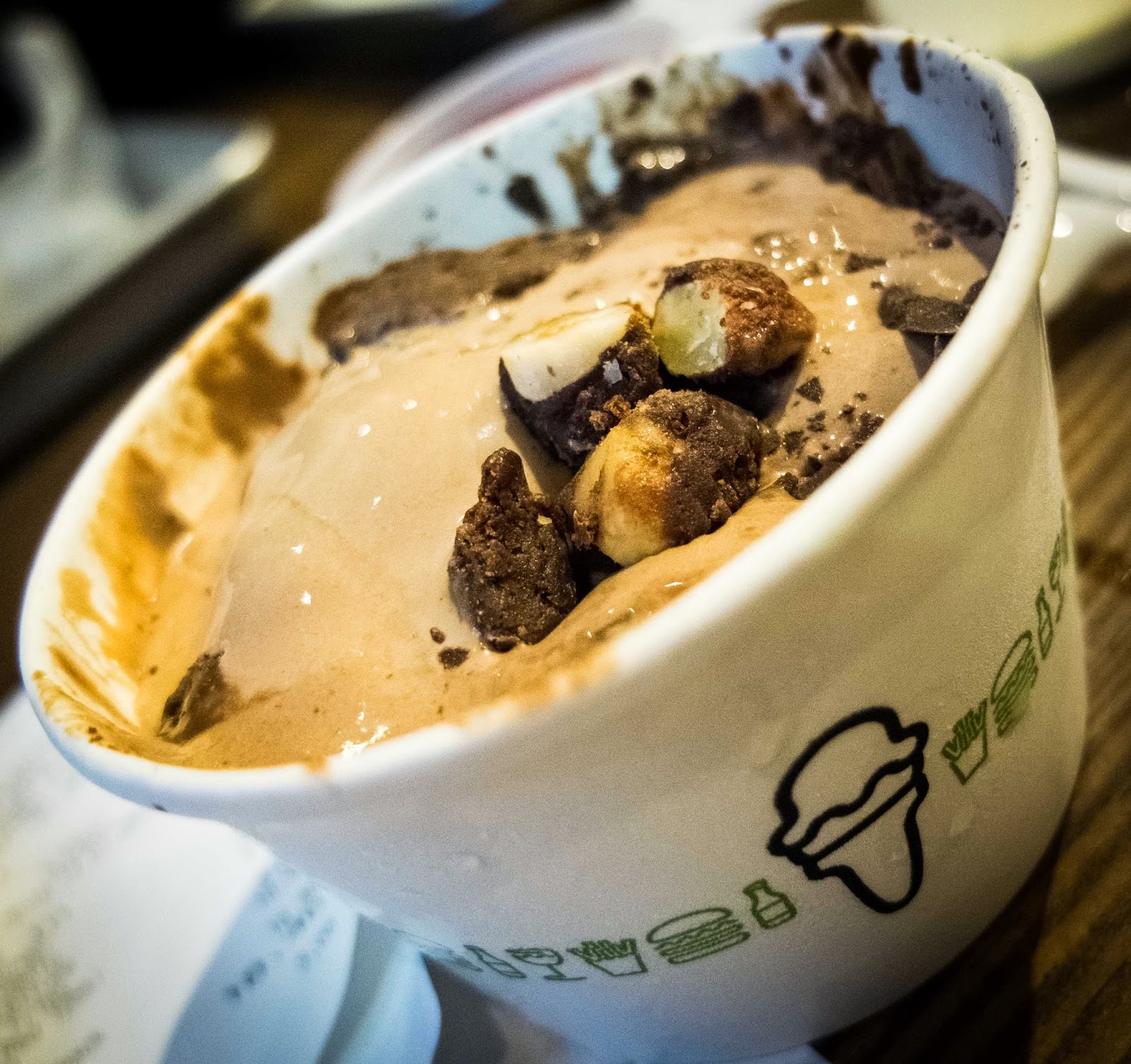 Ultimately though, I think the Union Jack concrete was indicative of where the problem lay for me with this Shake Shack. It’s trying to be all things to all people resulting in a series of contradictions. Yes, its fun to put very high end, high quality ingredients in the food, yes isn’t it terribly amusing to order Chassagne Montrachet with your burger (although a travesty; food & wine matching purists would be spinning at the thought) but ultimately it is still a predominantly open air burger joint in one of the busiest tourist traps in London. I would only ever use it as a pitstop for a refill, I can’t imagine meeting friends for a catch up or going on a date there, it all feels too crowded and rushed for a relaxing dining experience which means that top of the range drinks and ingredients feel a bit wasted.

Its also trying just a little bit too hard. The statement burnt into each table that the wood used was handcrafted in Brooklyn from the surface of a bowling alley. Why did you need to tell me that? It doesn’t make me enjoy my fast food any more. If its a way of shouting about how authentically American and retro you are then why try and be so British in your ingredient list and craft beers? This is where the main difference lies between Shake Shack in the US and over here. In the US it behaves as though it has nothing to prove and just offers good burgers at a good price. I think it got rather over hyped before the London opening and that has affected our perception.

I do get that I’m probably thinking about this too deeply. Would I go again? Yes, if I was passing and hungry but even then I think MeatMarket might just edge it for me for the sake of an extra 50 metre or so walk.


Had Shake Shack opened in London even three years ago we would all probably have been falling over ourselves with joy but London has become so burger savvy that its got to be something really incredible to turn our heads these days. Now I just need to go and try Five Guys.