Flesh and Buns. It sounds rather sordid before you even arrive doesn’t it?  Carnal cuisine. Descending down a staircase beneath a projector screen of manga cartoons you enter through red doors to a buzzy underground room where excess seems to be the order of the day. At one end of the long narrow hangar of a restaurant is a bar with Asahi on tap and row upon row of sake. At the other is the kitchen, open to the floor and populated by an array of generally rather tasty chefs churning out plate upon plate of glistening meat and steaming sweet hirata buns. in between the two sits a long high canteen style table populated by an array of different people. Lots of homesick Japanese girls relishing the type of food rarely seen outside the land of the rising sun, some random rockers with long hair and enough earrings to cause havoc at a Heathrow metal detector, confused looking tourists, groups of gossiping girls and the ubiquitous beardy hipster. In summary, there is something here for everyone. 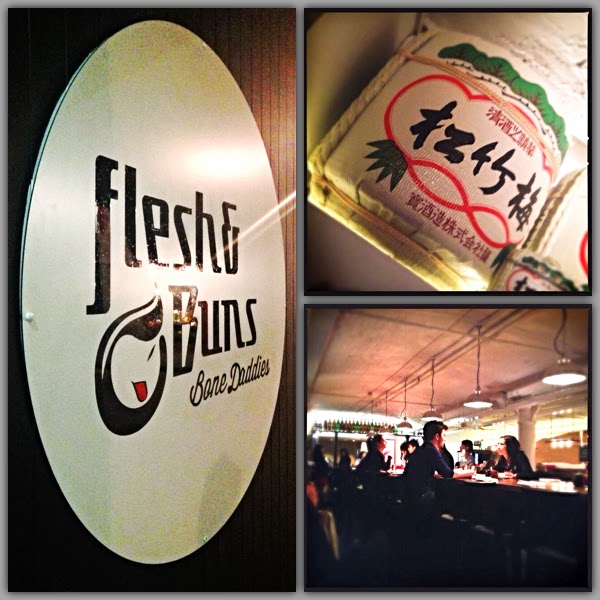 Yes, its street food best eaten with your fingers, yes, the conversation is loud and the atmosphere bustling so no, don’t take your Mum or a business meeting; the lack of table manners required to communicate and eat would likely horrify both. Second or third date however, and this might be your ideal place.

I’ve learnt my lesson the hard way with these quick and dirty street food style places, based on recent experiences at Chicken Shop and Dip & Flip; don’t go for the wine. That’s probably a slightly unreasonable prejudice here as the wine list is more extensive than I expected but I’m going down the sake and cocktail route tonight. I kicked off with ume no yado (or sake blended with yuzu juice to you and me) and bar a brief stray into lychee martini territory, the sake is where I stayed for the rest of the evening. 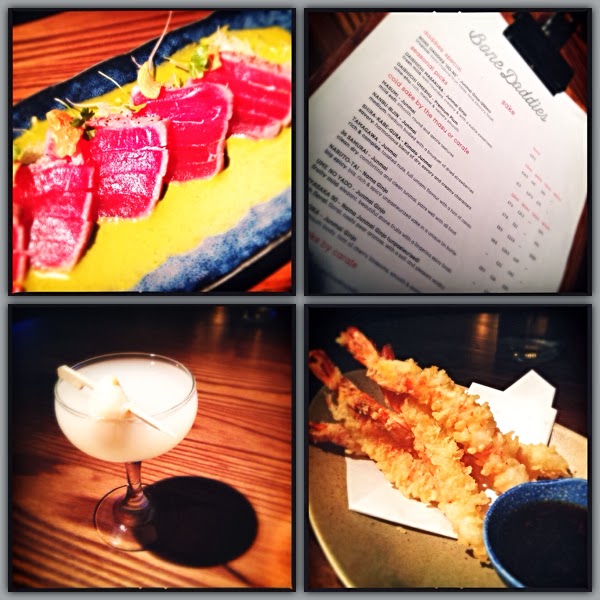 F&B is always destined to be a place where your eyes are bigger than your stomach. Seeing (and smelling) plate upon plate drift past the table en route to hungry tummies, we overdo the ordering. The waitress recommends two or three small plates and one main course. We laugh. One main course seems bonkers so a second one is added. The menu is so good that we could easily have ordered twice as much again. We leave fit to burst. Prawn tempura is not cheap for a starter at £12 but by the time we’d devoured them felt like good value. Five absolutely giant prawns in a light, crispy batter come with a yuzu dressing sharp enough to make your whole face pucker up.

Tuna tataki was seared gently around the edges served with a lurid green jalapeno sauce just the right side of spicy. As tempting as it was to carry on working our way through the small plate section (fried squid with japanese pepper and lime and the grilled asparagus with sweet miso will be definitely be getting eaten on my next visit) but there is the small matter of meat to attend to.


I’m utterly confident that a mushroom has never made me swear out loud before. It was so good it was ridiculous. Deep and smoky shitake meatiness stuffed with a sesame wafu dressing on yakitori sticks. The only time I have ever tasted anything remotely close to this (and even then it wasn’t as good) was in an izakaya on Omoide Yokocho in Tokyo. 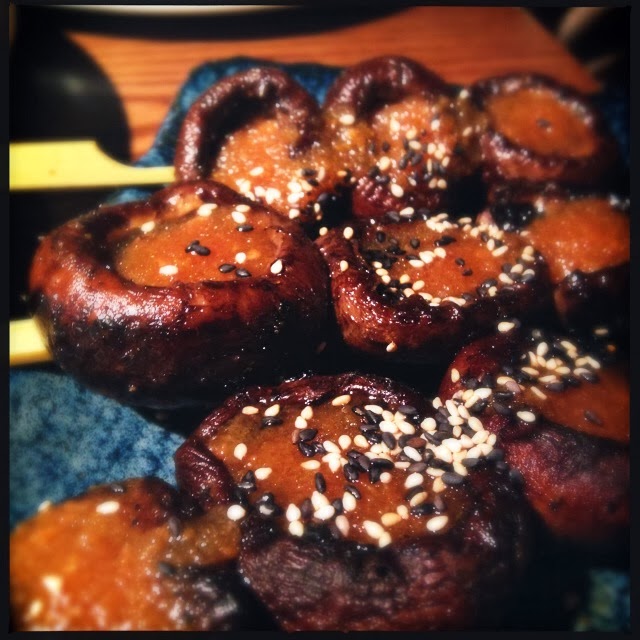 So onto the meat. Roast piglet belly is succulent and juicy with a crispy skin on top cut into the most perfectly straight strips ready to pop into the buns. Served with a sweet mustard miso sauce and super thin slices of pickled apple they are like the best sort of oriental twist on a hog roast. 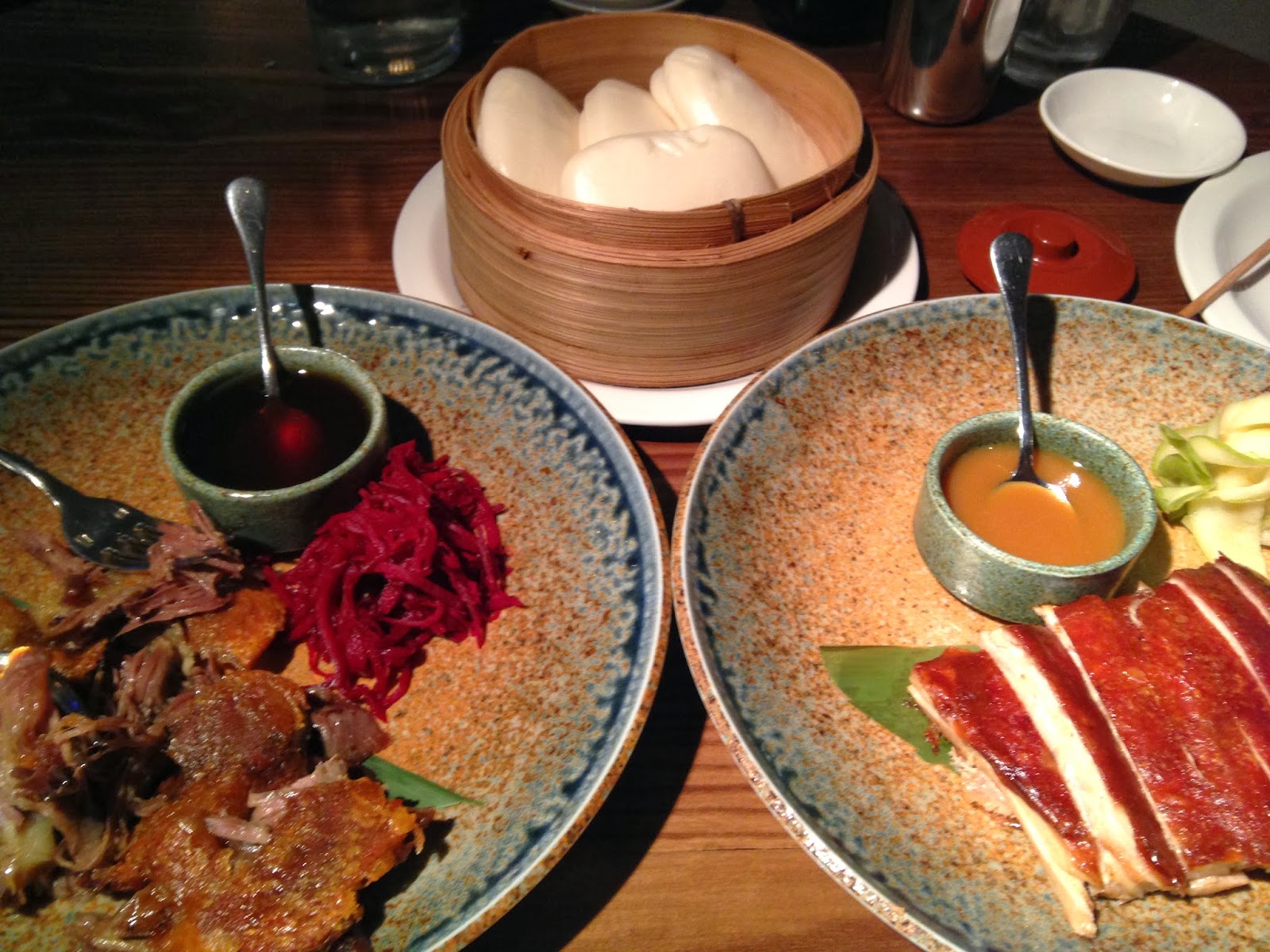 The hirata buns are soft and fluffy and hot enough to burn your fingerprints off.  The salad was completely surplus to requirements the pickled something or other that comes with each “flesh” option is enough to cut through the grease and provide a bit of a tang. Apologies for the fact my only photo of a stuffed bun is one I had rather childishly poked eyes in….. 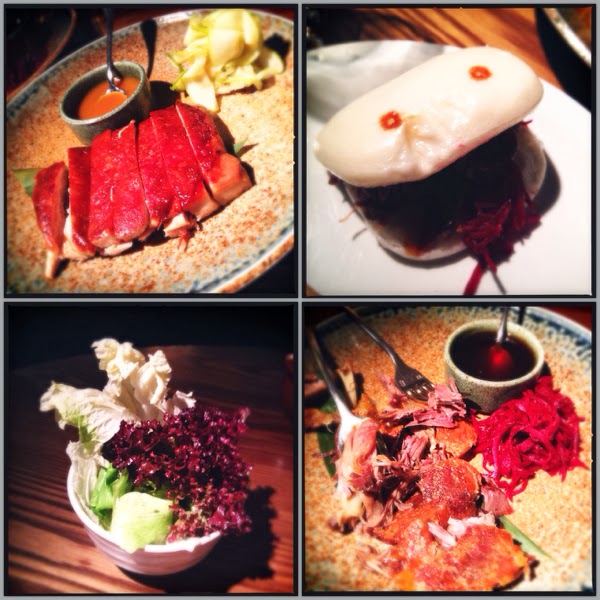 The duck was shredded at the table like at a Chinese and had properly crispy skin. A sour plum soy sauce  and shredded beetroot took it one step beyond the usual cucumber and hoi sin and the hirata buns are waaaaaay superior to the usual floury little pancakes.

Sitting at our table smacking our sticky lips and rubbing swollen bellies, anyone might have thought we were ready to throw in the towel but the problem was that I had heard about the S’mores.

S’mores have been much publicised but with good reason. A charcoal burner is brought to the table with your raw ingredients.  I am the god of hell fire and I bring you….. S’MORES. 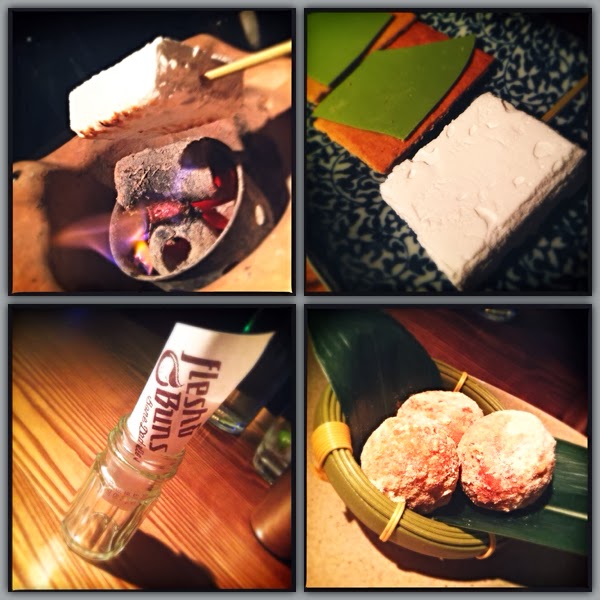 You get a slab of marshmallow on a stick which you toast good old campfire style over a fire pot. Having not done this since I was a kid I had forgotten quite what a fine art it is, hover for too long and it sets fire and you’re huffing and puffing it out, too little and its not melty enough. or as L put it “quite flammable little buggers aren’t they?” Just as its about to drop off the stick or completely incinerarate into charcoal you slap it on a biscuit, top with the green tea chocolate and sandwich with another biscuit.

Kinako donuts are unusual little beasts, quite hard on the outside and more savoury than you expect (although that might be because my teeth were still smarting from the sweetness of the s’mores) the sugar coating is made from finely powdered kinako soya beans mixed with powdered sugar. Filled with a creamy paste they are nonetheless pretty darned good. 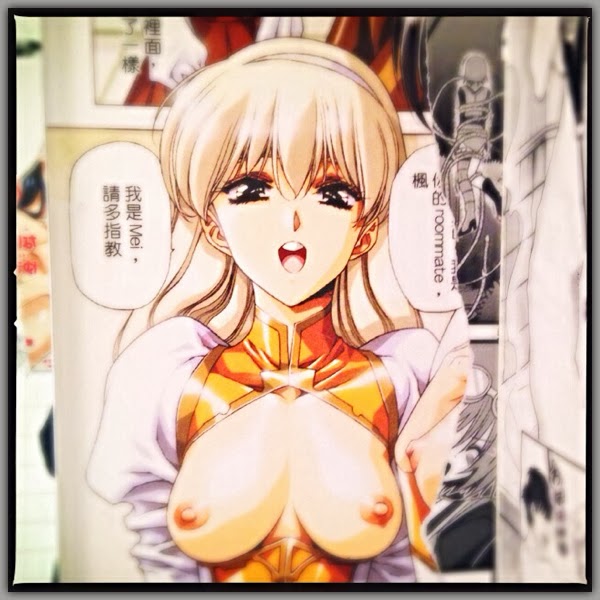 A special mention has to go to the toilets, all decorated with manga cartoons. The photo above is one of the less graphic ones so if you do go to Flesh & Buns (and you absolutely must) make sure you pay them a visit.

I adore Flesh & Buns. It really is a first for London providing a truly accessible mainstream experience with genuine Japanese food that goes beyond the average perception of sushi and ramen as being the totality of all things Japanese, there is so much more (although go to sister restaurant Bone Daddies for great examples of ramen too).

So Flesh & Buns, it’s sticky, its messy, its loud and it makes you groan and exclaim with pleasure, almost carnal after all then.

They are currently offering a flesh, bun and beer offer for £15 on Mondays when you reserve in advance (yes, they take reservations- even better!) so there’s no excuse not to get down there and indulge.