Earlsfield seems to be taking on a bit of a new dynamic. I’m not suggesting that its the next Dalston or Peckham or anything but the food and drink horizon is definitely evolving. A few years ago your options were pretty much Amaranth thai and the now defunct Willie Gunns plus a smattering of chains and pubs. Since then, The Leather Bottle has upped its food game, Ben’s Canteen is moving into the old Willie Gunn site and there are plenty of other small independents thriving. One of those is Roxie’s.


Let’s get the obvious out of the way first shall we? Its got a bloody awful name.  If someone asked me if I fancy a trip to Roxie’s I’d suspect I was on my way to a strip club or at the very least a neon-lit bar where bright blue WKD is on offer for a pound and “laydeez” drink free on a Thursday. It sounds tacky. I know that I’ve probably just offended the owner’s Mum after whom he named it or something but in all honesty it is off putting. It doesn’t make me want to go running to eat there. Which is a shame as the food is really rather good.

The menu has a South African lilt to it with Biltong on the snacks list and Boerewors on the mixed grill but it is a light enough touch to avoid the “theme restaurant” sentiment you get from the likes of Shaka Zulu. Its also not packed to the rafters with homesick Saffas in the way that Chakalaka in Putney used to be. Nonetheless, the South African owners clearly know their target audience as Roxie’s now has three outlets located in Earlsfield, Putney and Fulham thereby neatly triangulating around the main South African population of London (Wimbledon branch to complete the quadrant any time soon guys?)


So, the food. You’re probably not going to love it if you’re a vegetarian. There’s a goats cheese and tomato caprese as a starter and a beetroot risotto main (with goats cheese) but other than that you’re stuffed. That said, as a committed carnivore I have been heard to suggest on more than one occasion that “stuffed” might be the best possible outcome for vegetarians…. 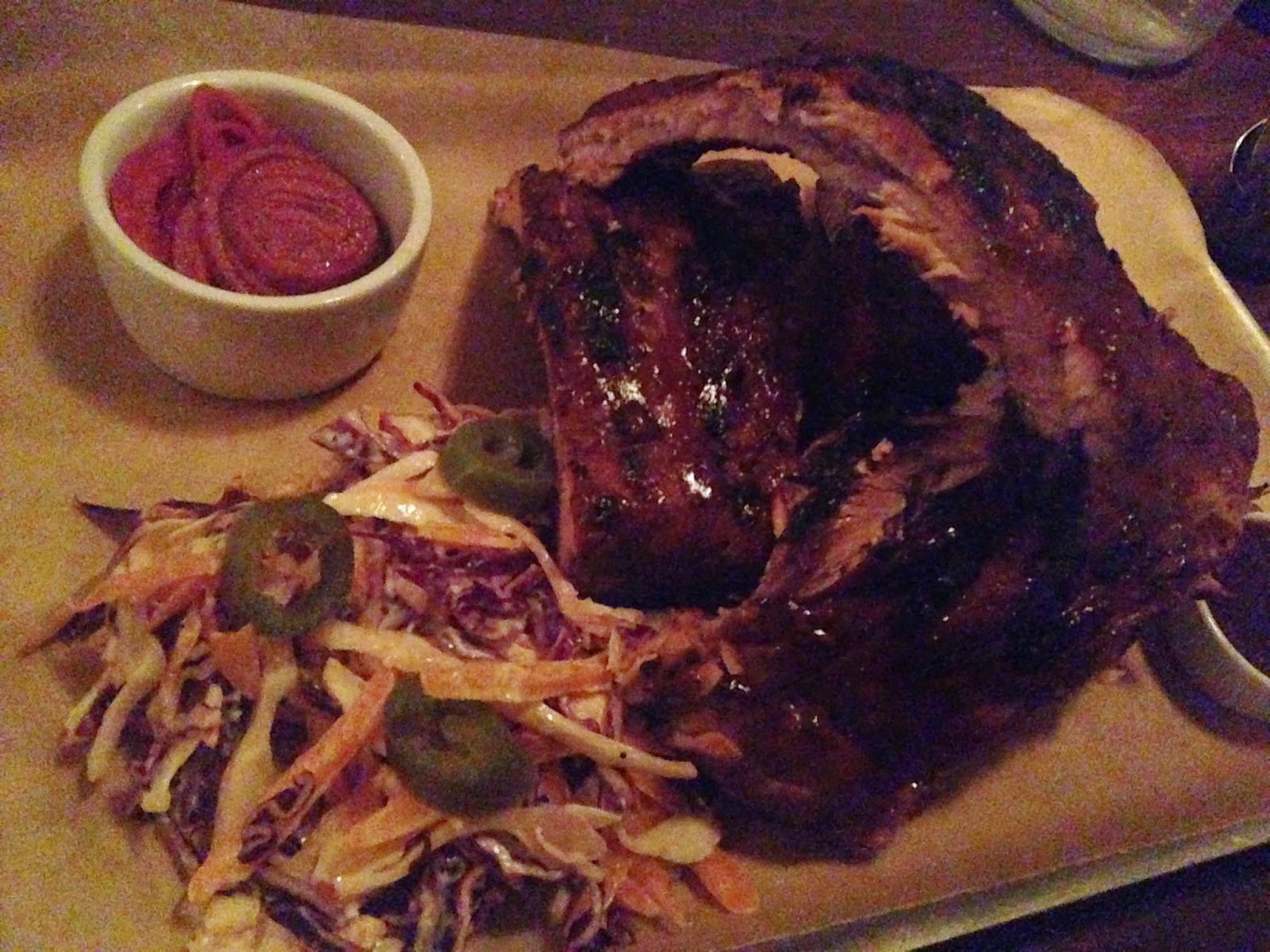 Ribs were smoky and tender and from the gradient of dark colouring on the outside permeating into the inner flesh they had been slow cooked for a long time. The photo doesn’t begin to do them justice but the light was awful. Pickled red onions that accompanied them were really delicious, soft, tangy and juicy with a residual sweetness from the onion- none of that added sticky sweet syrup. The coleslaw was fine but nothing to write home about.


The main event at Roxie’s, however, is all about the steak. In South Africa excellent quality steak is on offer at incredible prices – if you pay more than a tenner for fillet steak and sides you have been robbed. I can therefore understand why your average South African ex-pat in London balks at the idea of £30 upwards for a steak and chips which is pretty much the standard for a decent anywhere these days. The aim of the owners was therefore to source quality meat from a good butcher at a good price. They settled on a butchers in Smithfields market and quite right too as the cuts and quality are beyond reproach.  My fillet was thick and well hung and cooked exactly as I’d ordered it. At £15 for a surf and turf you can’t complain. Yes you did read that right; it would have been £12 for just the steak. The prawns that came with it making up a “surf and turf” were a good size with plenty of them but coated in a rather odd, tangy, green marinade of unidentifiable origin so I might suggest just sticking to the meat.

Speaking of meat, the Boerwors sausage on the mixed grill was excellent. Flavoured with hints of nutmeg and clove it belied its African roots without being overpowering and held its own on the plate alongside the steak. If you’re looking for meat overload the strips sounds good, a mixture of sirloin, fillet and rib eye.

The wine list is extensive enough to please most palates and (sadly for me) not over reliant on South African wines. We opted for a Hartenberg Cabernet Shiraz, not the 2010 as advertised but a slightly young 2011.  It needs a couple more years in bottle to really show its best but it was a great drink with steak and barbecue flavours and not over priced at £30.

In summary, there are very few places that you can get a decent steak in London at the kind of price that Roxie are offering it so this is likely to become a neighbourhood staple for me. Its even worth travelling for. Because it isn’t hipster trendy or with banging music its also a crowd pleaser. Its a great place for a date or a birthday party and equally I know my (quite fussy) Dad would love it. Will I be back? Yes definitely.