I have to start out with an apology. I’m rather conscious that here I am merrily writing about somewhere that has closed down (albeit with a potential replacement in the pipeline). Jolly annoying I know as there is the risk that it might all sound rather yummy and then you can’t go and have it yourself. So there we are; SORRY. But it was such a perfect dining experience that I’m downgrading that apology to a lower case and tiny print ‘sorry’.


I had initially decided against posting this article as the meal itself was a couple of months back now but I’ve been for quite a few meals recently at places that have been the subject of lots of critical acclaim and chatter and in various cases I just wasn’t that wowed and in some I was downright disappointed. It has been months since I had a meal that I thought was mindblowing on every level from quality, quantity and innovation of dishes to perfection of service and the overall experience (other than the eternally perfect Medlar). In fact one of the last occasions that happened was chez Tom Aikens. I was very definitely wowed by the experience there so decided to post it any way as I’m very much hoping that we will see Tom back cooking at the highest level in London again soon.

My wine tasting buddy S has dined at Tom Aikens on a seemingly weekly basis ever since I have known him and cannot say enough good things about the food,  wine and service. I think we may have to put him into therapy now that it has closed its doors. Either that or attach him to an intravenous drip of good German Riesling to ease the pain.  As soon as the news of the closure broke I was in touch like a shot begging to be included on his last pilgrimage. 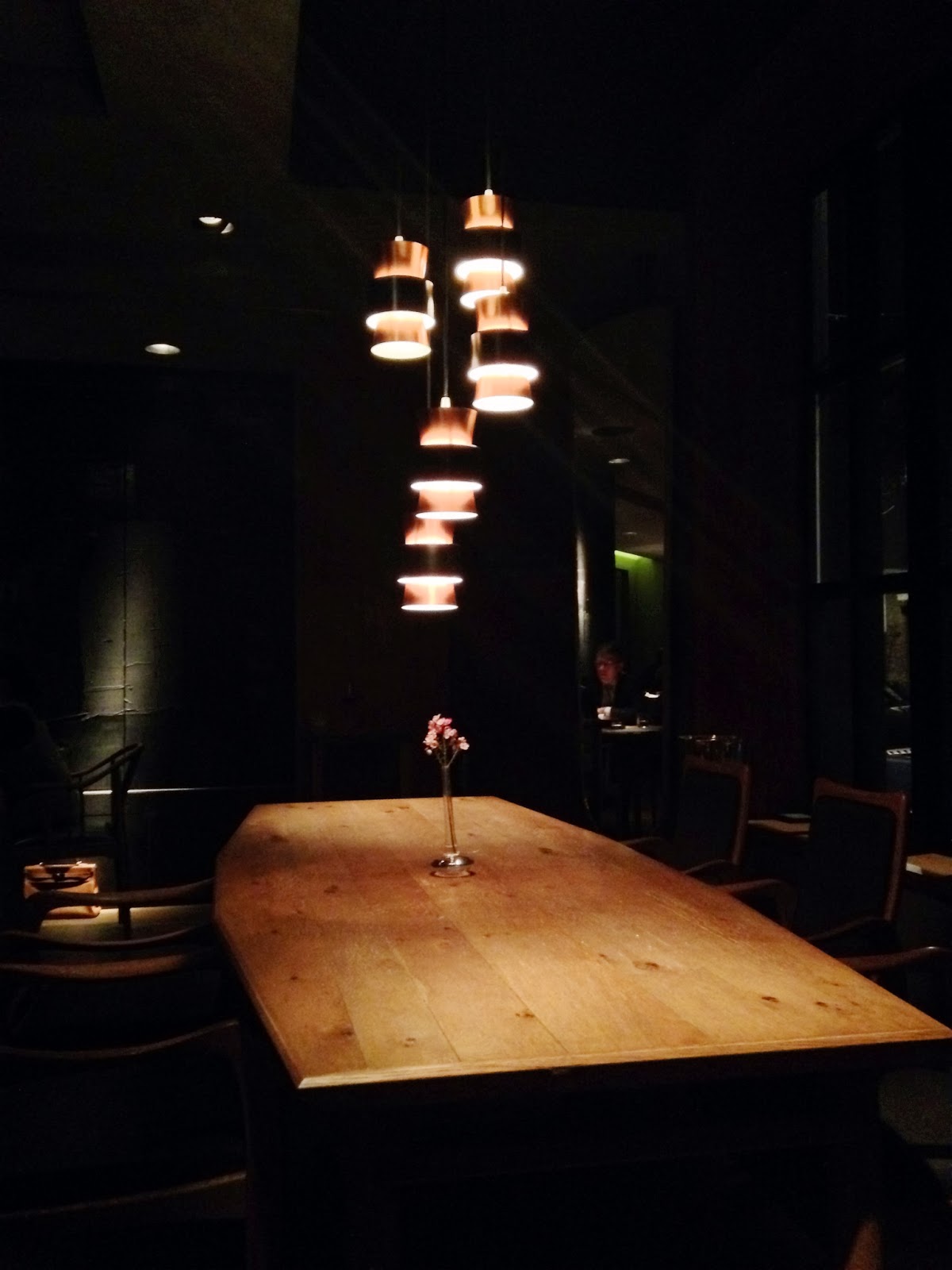 I even got there early which is pretty much unheard of. So early that most tables around me were deserted, see above. They soon all filled up though. I really liked the decor of the restaurant. Not too starchy but still quite slick. Quite dark but with a spotlight above each table making each table feel like its own little bubble. A single flower was placed on each table in a vase with a round bottom that made it rock to and fro like a metronome and convinced me that I was about to spill something. Staff were all lovely but sartorially speaking I did think that the sleeveless jackets and denim shirts were a step too far though (didn’t get a photo of those, they were moving too fast).


Tom Aikens himself is something of a Marmite character. Love him or hate him. If you were to form your opinion solely from the Twitterati then he would probably be pilloried.  Rumours abound of assault in the kitchen, accusing customers of theft and leaving suppliers up the creek without payment. None of it is good.  People who know him personally tell a different story. Who knows. Whilst those things are indeed important, right now as a diner my main concern on the night is how well he and his team can cook and what’s about to go into my tummy.


Canapes included the thinnest slices of translucent gold potato crisp stuck together with frozen foie gras and cepe. Shortbreads with blackberry (bit too desserty for me as a canape),  and horseradish cheesecake rolled in fresh herbs. The bread was exceptional, especially  bacon and onion brioche. Who doesn’t need bacon and onion brioche in their lives? Other breads included polenta bread, rustic buttermilk and cepe bread. You also get pretty spoilt on the butter front. Three options; cepe butter, bacon butter or sea salt butter. Um, all three please. 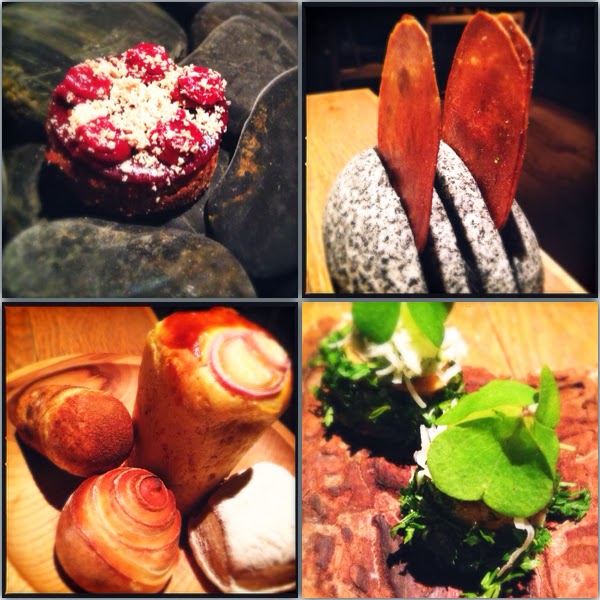 The wine list arrived in the form of an old edition of Hugh Johnson and Jancis Robinson’s World Atlas of Wine with the restaurant’s offerings pasted into the first fifty or so pages of the book. Yes, that many pages, it’s a pretty extensive wine selection. It is the first time that I have seen a restaurant deliberately apply a lower profit margin to wines that are made from unusual grapes or are from lesser known regions which I think is a brilliant idea- anything that persuades people to take a chance on something other than their usual “go to” is fabulous. All the big hitters are there too but I’m not spending too much time poring over the contents tonight as we’re asking sommelier Raphael to go freestyle on us.

Although there was the very tempting option of a tasting menu, I was wisely advised to go a la carte to get a proper big dose of each course. Whilst I do adore a good tasting menu there is something annoying about loving something so much that you’re kicking yourself that you only have a couple of bites of it. I kicked off with venison tartare with smoked beetroot, hazelnut mayonnaise and horseradish snow. If you have read my experience at Restaurant Story you may already know that I’m not a big fan of “snow”. There are only rare occasions when flavoured ice shards can add anything to a savoury dish in my experience. This was also the case with the venison dish, I hardly got the horseradish flavour at all- not that it mattered though, you could just have given me a tub of the hazelnut mayonnaise and I think I could have happily eaten it with a spoon.  I’m desperate to try and recreate it at home, as thick and unctuous as a mayonnaise could possibly be with a tooth cloying richness from the hazelnut oil.  The remaining ingredients were stratospherically good. Silky venison cubed alongside beetroot, the slight tartness acting as the perfect foil to the rich meat and mayonnaise with the leaves bringing a bitter edge. 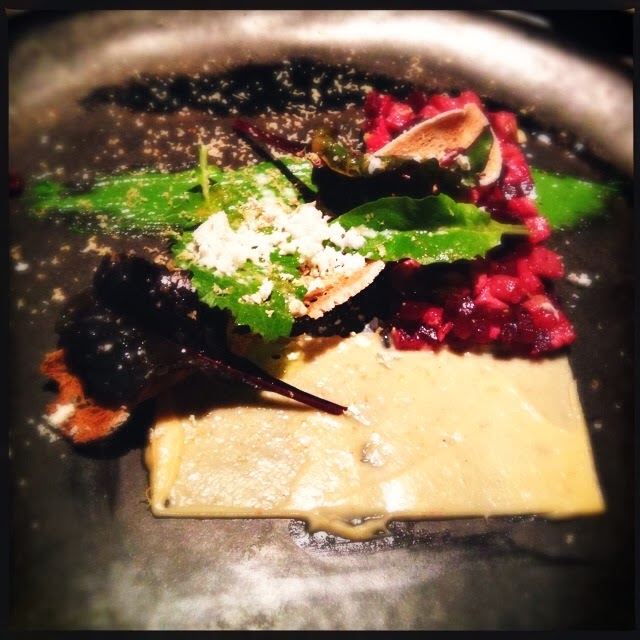 The marinated scallop with chorizo red pepper puree and Iberico ham was a classic combination of flavours- nothing exciting or ground breaking perhaps but perfectly delicious nonetheless.   Deep and smoky with a little acidic bite from the red pepper. 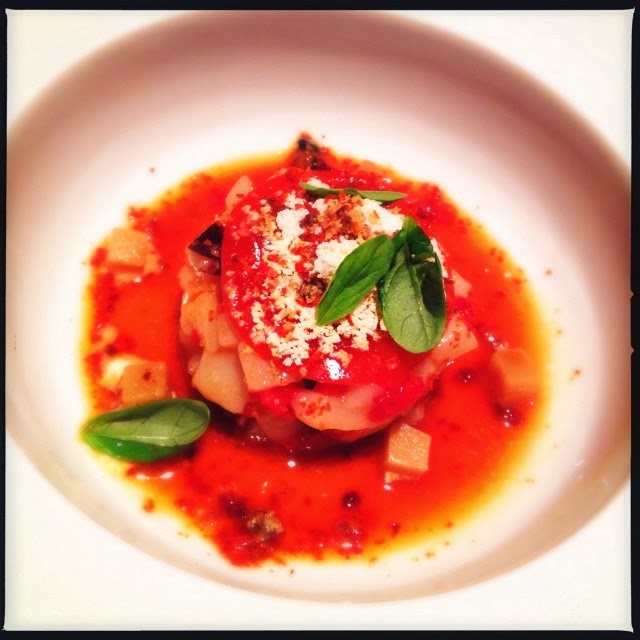 We  entered the wine fray with a Galician  Ribeira Sacra which means “sacred shore” and I can see why based on the wine that it produces. Dry red but with sweet bursting ripe red cherries. I really do believe its true when people say that you can taste the sun and this wine was that philosophy in a bottle. 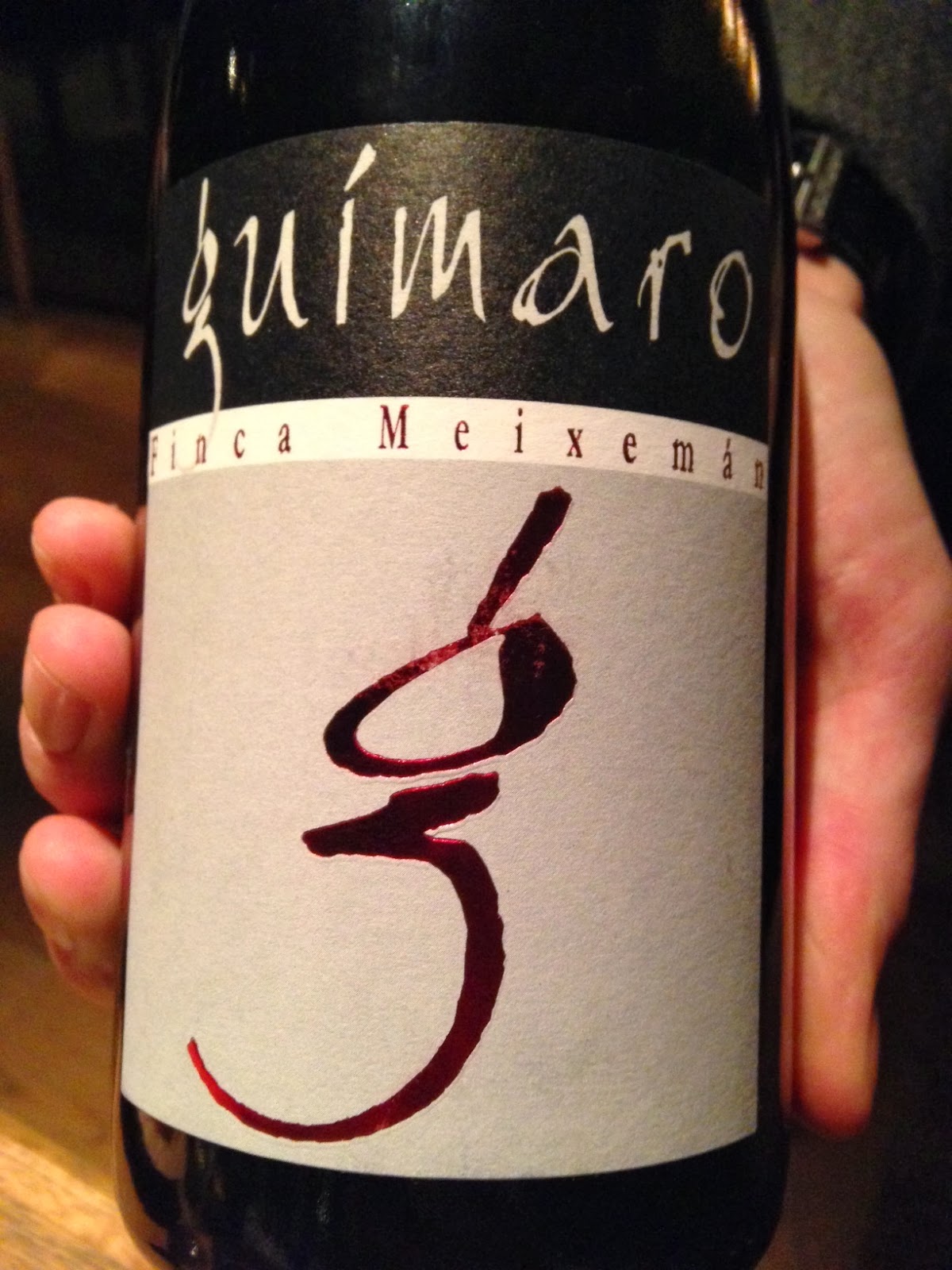 Next up came piglet belly with smoked apple and baked aubergine. As if roast piglet cooked two ways couldn’t get any better it came topped with pork scratchings. It truly was amongst the best pork dishes that I have ever been served. The aubergine had a depth of flavour and smokiness that no baba ganoush has ever managed to reach in my experience.

I’ve just been given (thanks H!) a Super-Aladin hand smoker (post on that soon) so will be trying out smoking apple puree as soon as possible as it was truly a revelation, Sunday roasts will never be the same again. 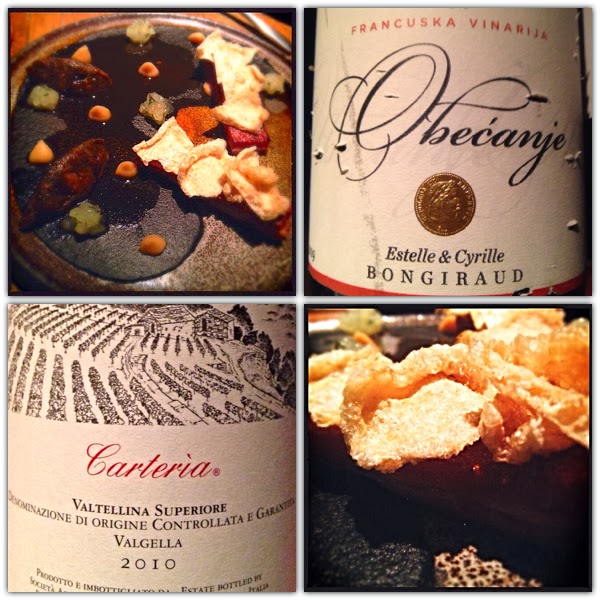 Beef short rib with red cabbage gazpacho, pickled shallot and oyster was extremely tempting but I just can’t bring myself to love oysters. I’ve tried them every which way; raw, deep fried, steamed you name it, they just aren’t for me. That said S said it was lovely and it did look great even though the red cabbage gazpacho was an alarming shade of virulent pink. 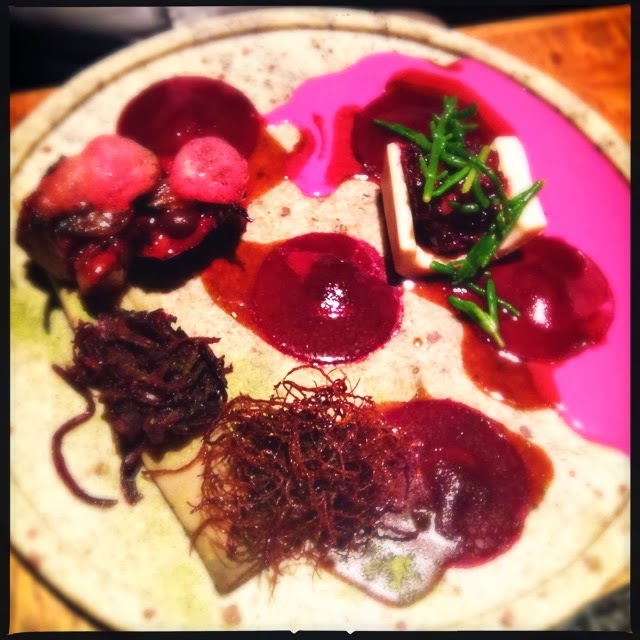 A carmenere was a bit of a curve ball and, like Mr Aikens himself is probably a marmite option. To me it tasted like the smell of a medicine cabinet that has both your Dad’s vintage bottle of Brut or Old Spice in it as well as various sticking plasters and antiseptic wipes. I swapped it out for something a little less risque.


Barely does a restaurant meal go by when I don’t add a cheese course especially if I’ve seen the trolley drifting around the restaurant during my meal. The trolley here didn’t disappoint either, the Epoisses being a particularly gungey, smelly example (this is a good thing I promise). 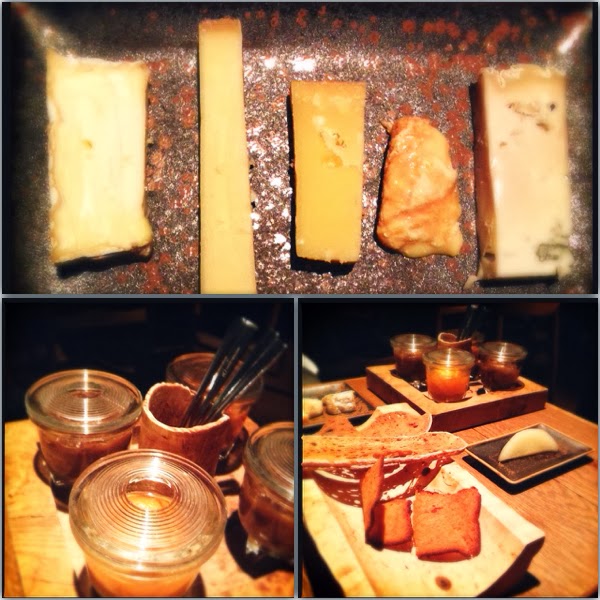 I loved the wafer thin toasts, especially the gingerbread one, unusual perhaps with cheese but worked very well as did a glass of Maury. I’m a big fan of Maury as it has never let me down so far (although I can’t guarantee there aren’t bad ones out there). Sweet and full bodied enough to stand up to both cheese and chocolate but without the viscous stick-to-your-teeth characteristics of chocolate favourite Pedro Ximenez. S went for a glass of Savagnin which was ok I suppose and great for the palate of an aged Riesling connoisseur but by that point of my meal I’m well and truly onto the sweet stuff. 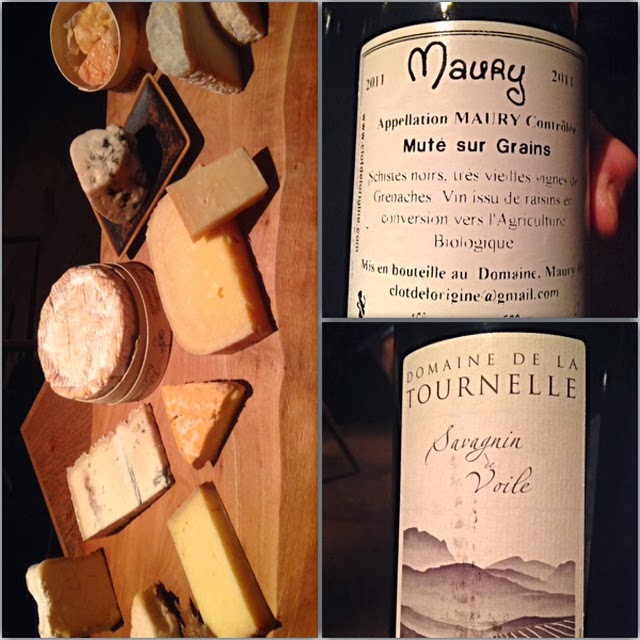 Apple jelly, caramel parfait and apple air comes served on a giant stone egg shaped platter. Its basically apple in every permutation you can think of served with a giant claw like sweet beignet which when combined with the apple air (read ‘foam’) reminds me of the sea shore. For some reason whilst under the influence of a lot of wine I described the overall dish as looking like an alien egg and afterbirth but I promise you, it was utterly heavenly. 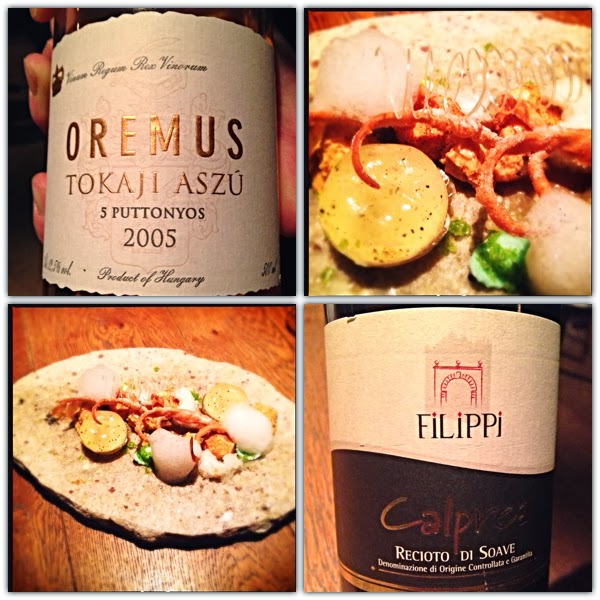 Who can say no to Tokaji? So Oremus 5 Puttonyos isn’t the most original or unusual of wines with dessert but you just can’t go wrong with it.  Honey, apricot, yep you’ve heard it all before but its all good.

Petit fours may be the most Willy Wonkaesque plates of extravagance that I have seen anywhere. An exquisite caramel-filled mini doughnut left me trying not to lick my lips and failing miserably. A vintage metal box revealed shards of nougat and mini bars of chocolate. A separate dish offered up a sticky chocolate tuile and chocolate truffle. 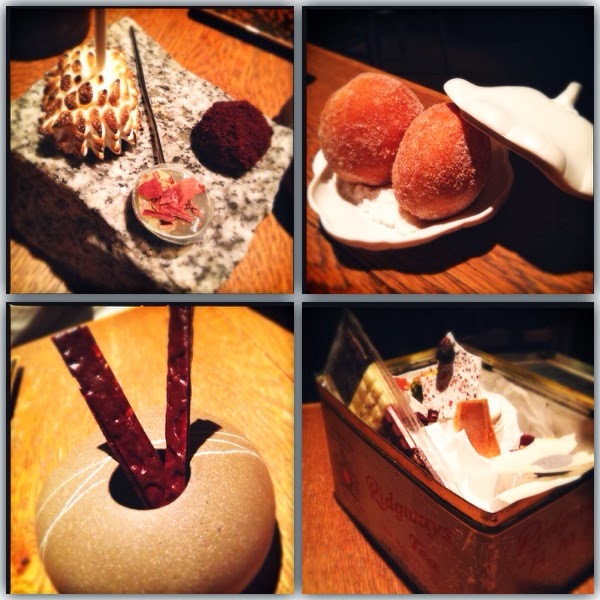 The bill came tucked inside a beautiful leather-bound, antique recipe book, nestled in a page bearing a recipe for Rumpledethumps. I’m not sure how good it would taste, nor did I 100% understand what it is short of being a kind of bubble & squeak but it has the best name ever and that alone makes me want it (minus the references to beetles though). 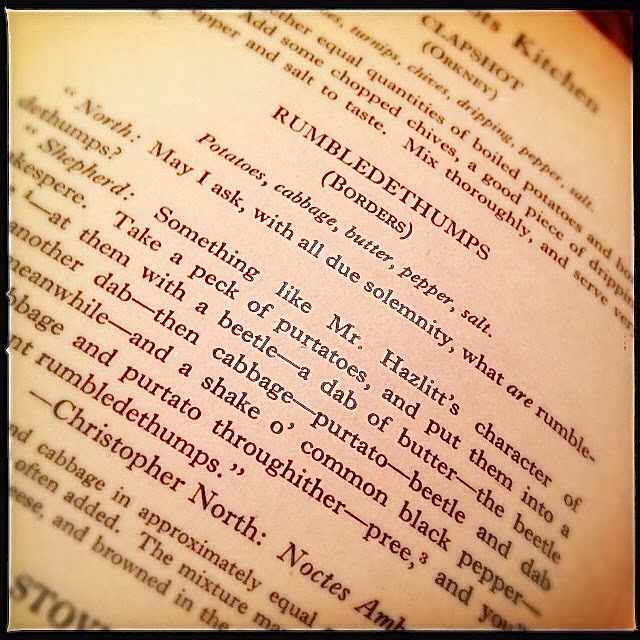 As always with Mr Aikens, the rumour mill continues to grind as to what the future holds. Twitter had its claws on display with noise about potential financial troubles, the internet talked of a possible move stateside to join his brother in New York. Put us out of our misery soon please and tell us we can eat this level of  food closer to home than the other side of the Atlantic!!

It was one of the very best meals that I’ve had in ages and I’m sad that I discovered it only on the cusp of closing. If you haven’t been then I’m truly sorry but fight me to the front of the line if and when his new restaurant opens in the centre of town.