I am pretty sure that unless you have been hiding under a gastronomic stone for the last couple of years you will have heard of Dabbous. Opened in early 2012 to immediate critical acclaim, chef Ollie Dabbous’ first restaurant became virtually instantaneously unbookable.  I sent an email back in May 2013 enquiring as to when I could book a table and received a prompt, polite but firm response notifying me that every table for 2013 was booked but I could lodge an enquiry from September for 2014. Yes, you did read that right; because they don’t operate a 30 or 60 day policy like many places they were booked up for the entirety of 2013. Madness. This sort of hype can be dangerous and catching. After all, surely if its still this full two years after opening it must be amazing, no?

The critical acclaim was added to in 2013 when Dabbous was awarded its first Michelin star. That said, its like no other Michelin location I know of in London. Walls have the now ubiquitous crumbling concrete and plaster, the dining room ressembles the stark, metal gridded set of the recent Donmar staging of Coriolanus, I half expected a naked Tom Hiddlestone to be winched down on a chain between courses (it didn’t happen unfortunately). Tables in the restaurant are packed close together risking bruising from sharp furniture leaving me wondering whether I would summarise Dabbous as painfully hip or painful hips… 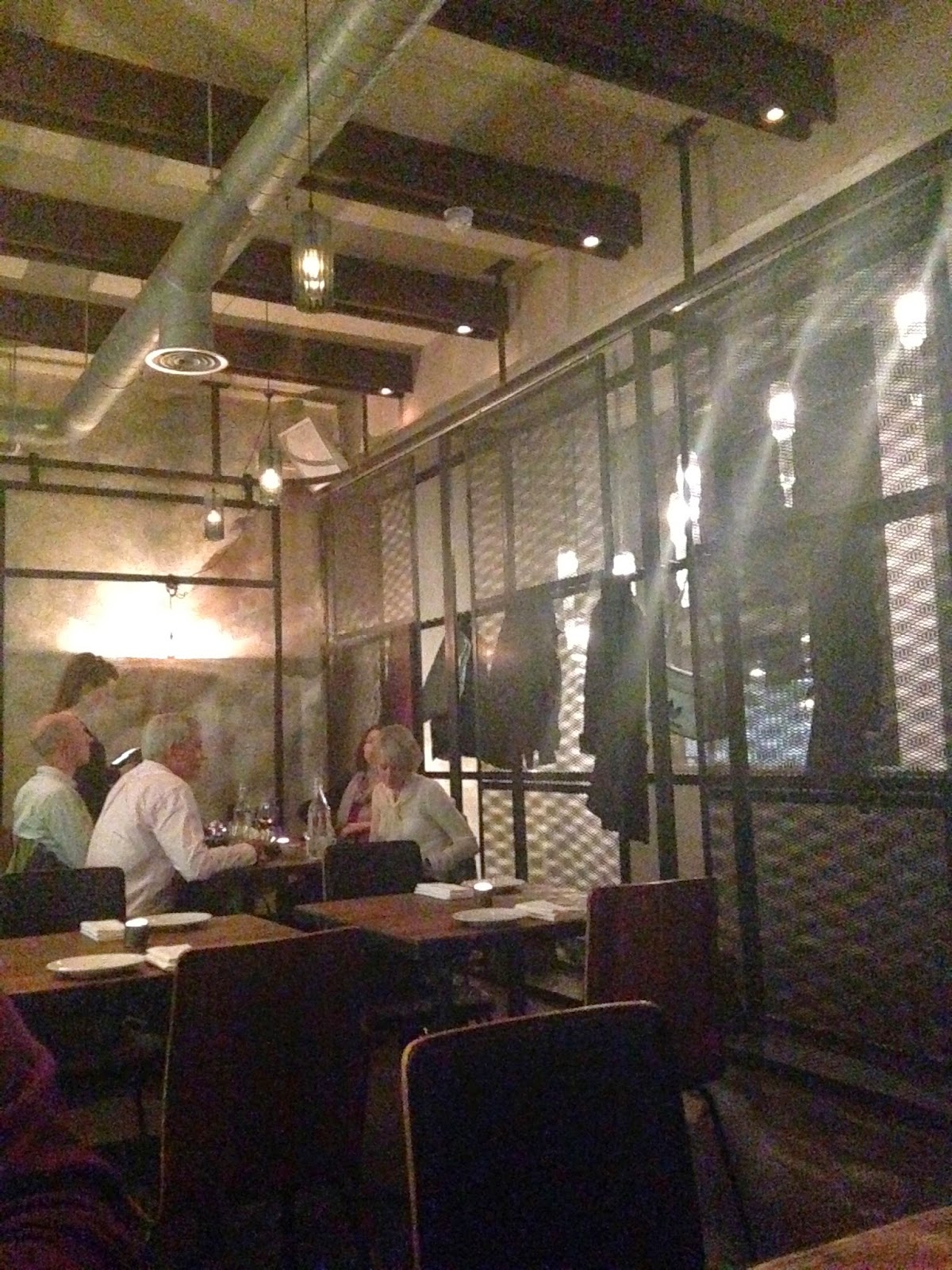 Oskar’s Bar downstairs has an extensive cocktail menu and offers a limited menu. When we arrived it was pretty empty so would be a good way to get a taste of Dabbous without the almost interminable wait for a table. Speaking of tables, after finishing two very well made cocktails we went upstairs with increasingly grumbly tummies, so far so good.


We had been hoping to have a matching wine flight with the menu but couldn’t find one in the list and the sommelier didn’t mention or suggest one despite our prevarication trying to find one wine to match all the dishes, it was only at dessert time that we found it nestled away on the inside back cover which was a bit of a shame.


We settled on an ever reliable JJ Prum Riesling on the basis that its medium dry so works with a wider range of dishes (it was particularly fab with the coddled egg). The wine list is reasonably extensive without being too crazy off the wall. 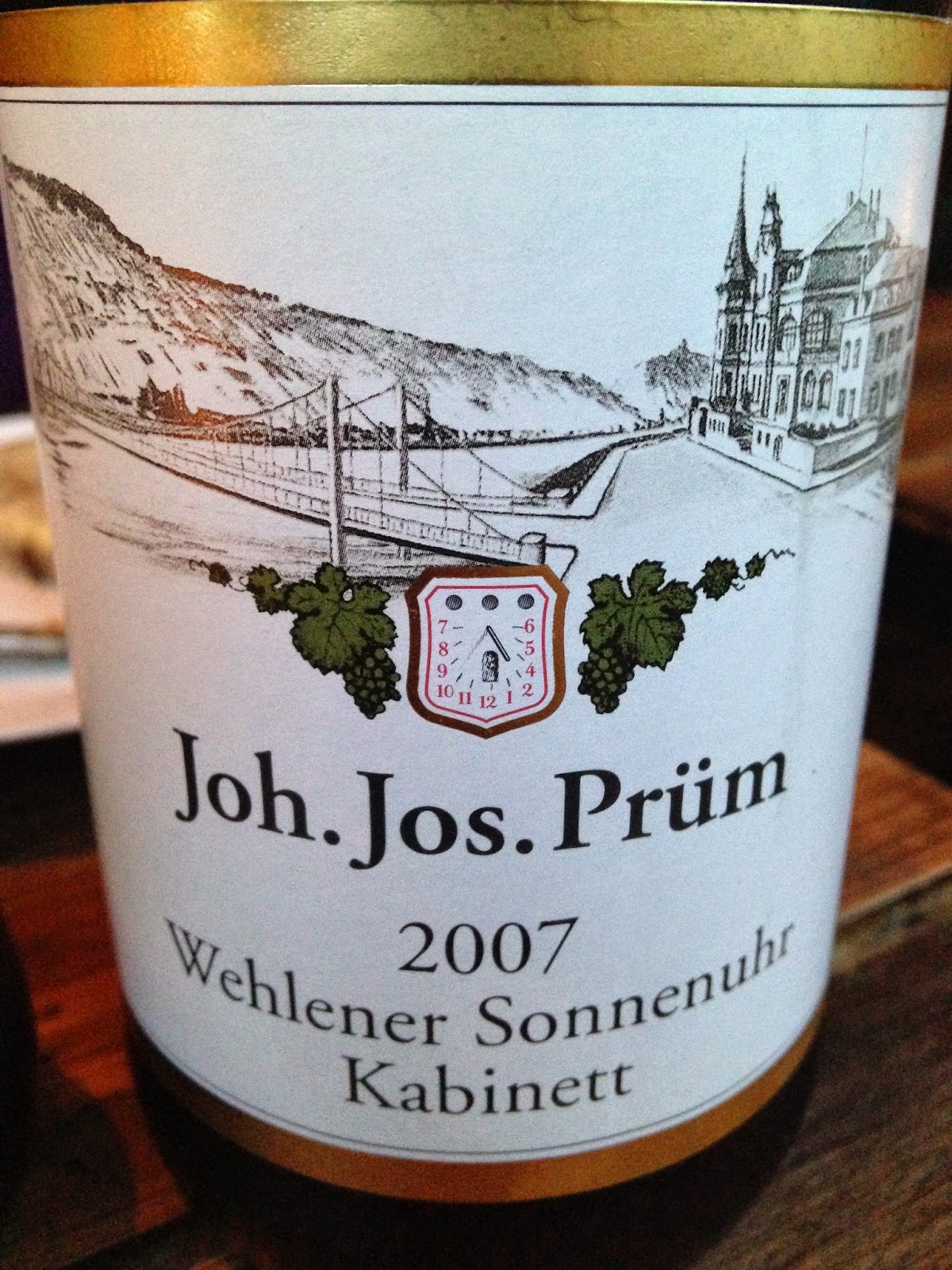 The first course arrived swiftly. Fat, dark green English asparagus spears served with virgin rapeseed oil mayonnaise and crumbled hazelnuts. It was very tasty undoubtedly. It did, however, seem to me that whilst its great to have wonderful ingredients showcased through simple plating and service, there is an argument that it is just asparagus and mayonnaise. Its not exactly highly technical. 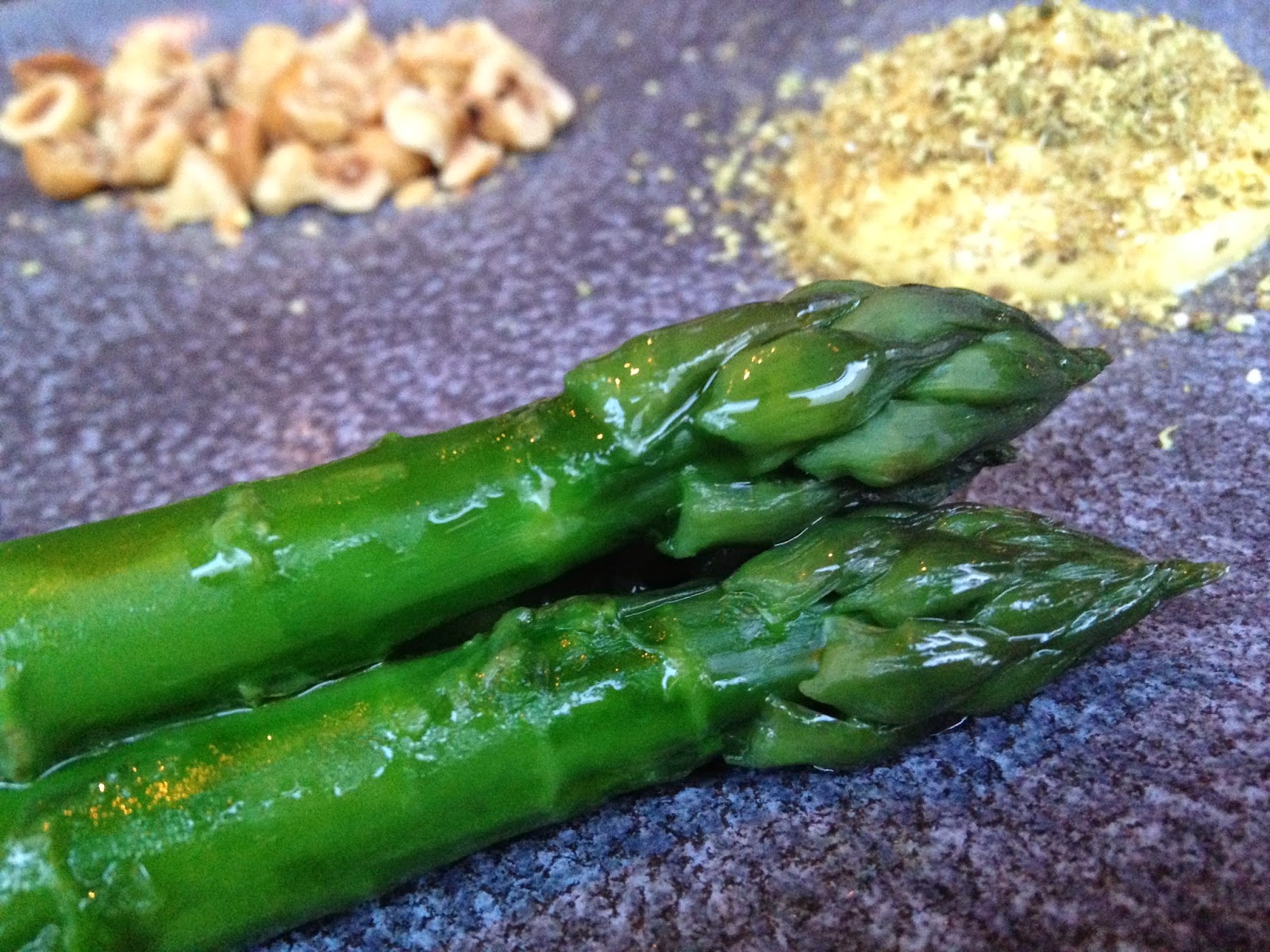 A bowl of avocado, basil and almonds in a chilled osmanthus broth followed. Certainly imaginative and clever in the marriage of flavours and very pretty tasting due to the osmanthus, I can’t help but think that I might have liked it to be warm. 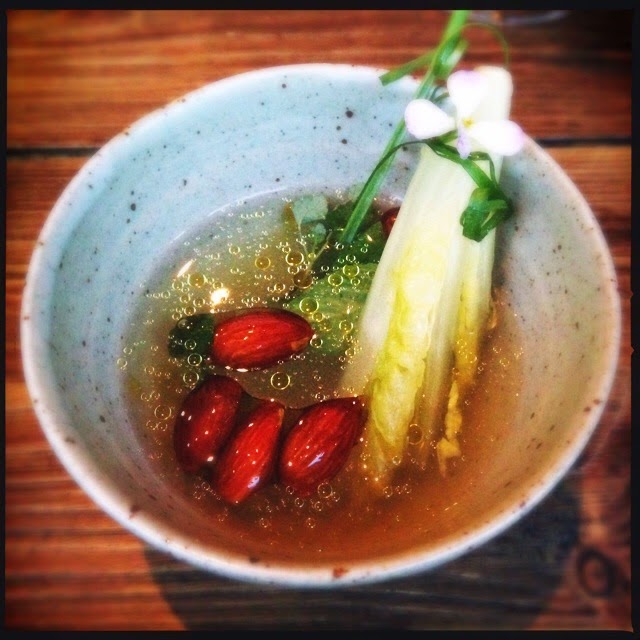 Vulturous, circling serving staff tried to swoop repeatedly on our broth bowls (three in less than two minutes) leading us to sit with our spoons aloft in mid air purely to create a hiatus in an otherwise brisk gallop of a meal. The table next to us asked to slow down, the thumping beat of the music creating a slightly frenetic pace for both service and consumption that was not terribly relaxing.

Just as I wondered if I was staring down the barrel of a tasting menu to rival the “emperor’s new clothes” of Restaurant Story along came the coddled egg with smoked butter.  A thing of such beauty & perfection comes along so rarely; silky smooth and like a warm blanket for my tongue I felt like I could have eaten an ostrich egg sized one but in reality probably couldn’t it was so rich. I can’t begin to properly describe quite how utterly wonderful this course was. 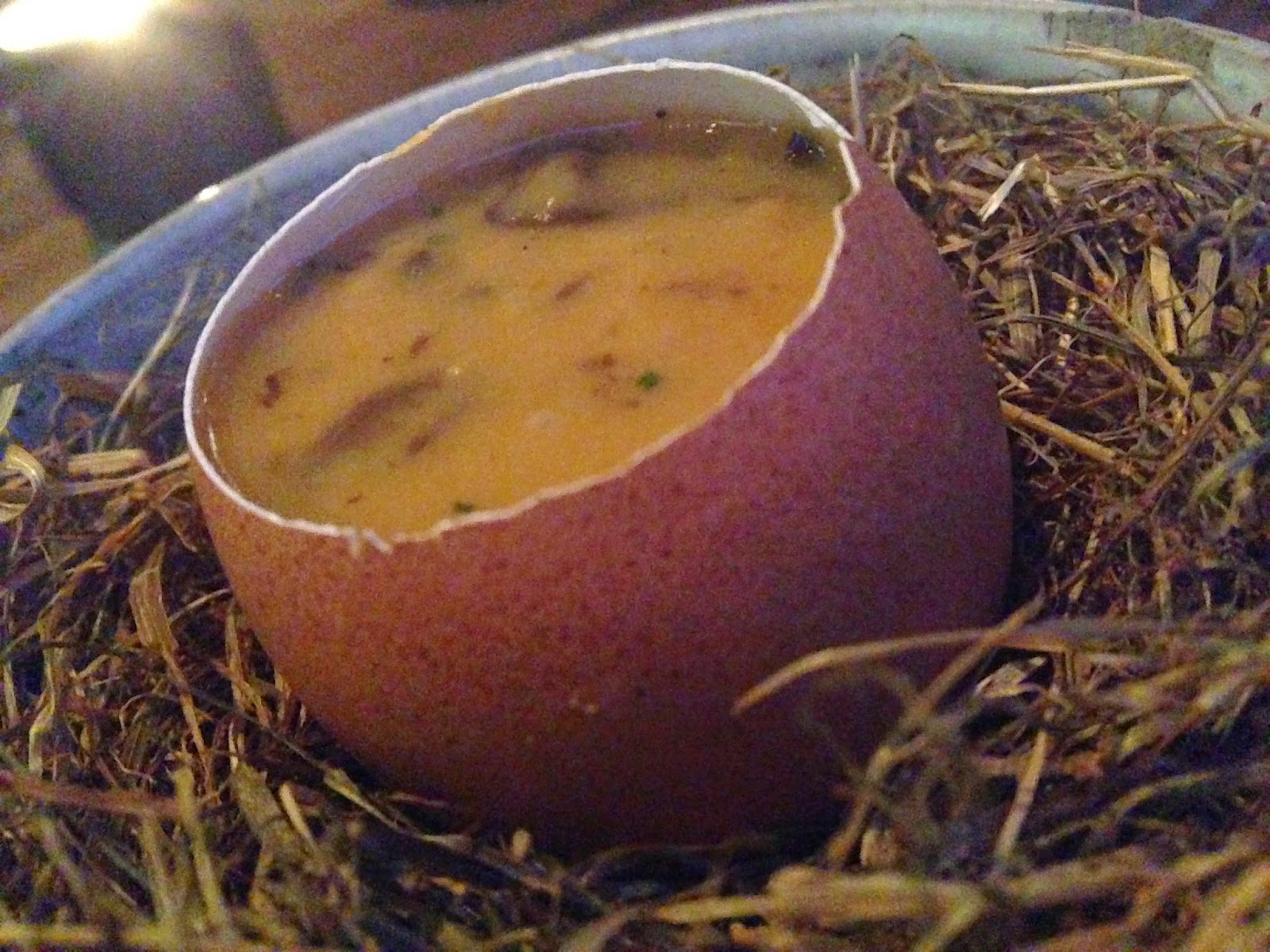 Things carried on in the same inventive and delicious vein with the arrival of barbecued octopus with muscadel grapes.  An explosion of sweet juice from each grape contrasted the char on the outside of the octopus tentacles. Octopus can be a tricky beast but this one was soft and tender without a hint of rubber which must be a bit of an undertaking to barbecue. I could merrily have ploughed on eating portion after portion until I’d munched all eight tentacles but the next course beckoned.

Pulled veal with white asaparagus and summer truffle was tasty and I’d quite happily eat it again but not particularly memorable in comparison with the egg or octopus dishes. 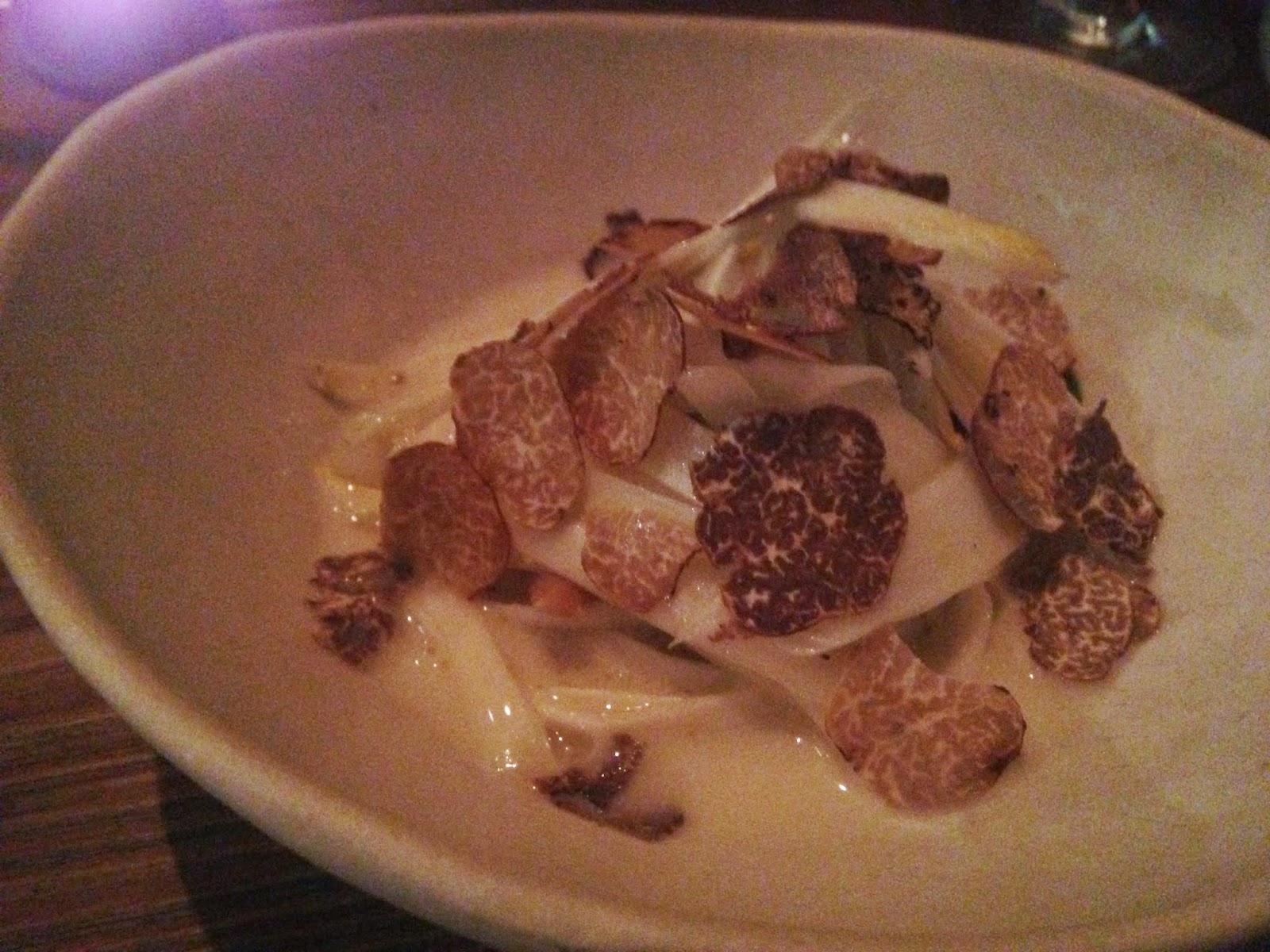 I’m sorry to report that things then derailed slightly. Lovage ice was revolting, not a word I use lightly but completely applicable here. There are some things that are creative and interesting but should never actually be eaten and this is one of them. A blast of very intense, savoury, celery-like flavour but cold and frozen. Let’s move swiftly on. 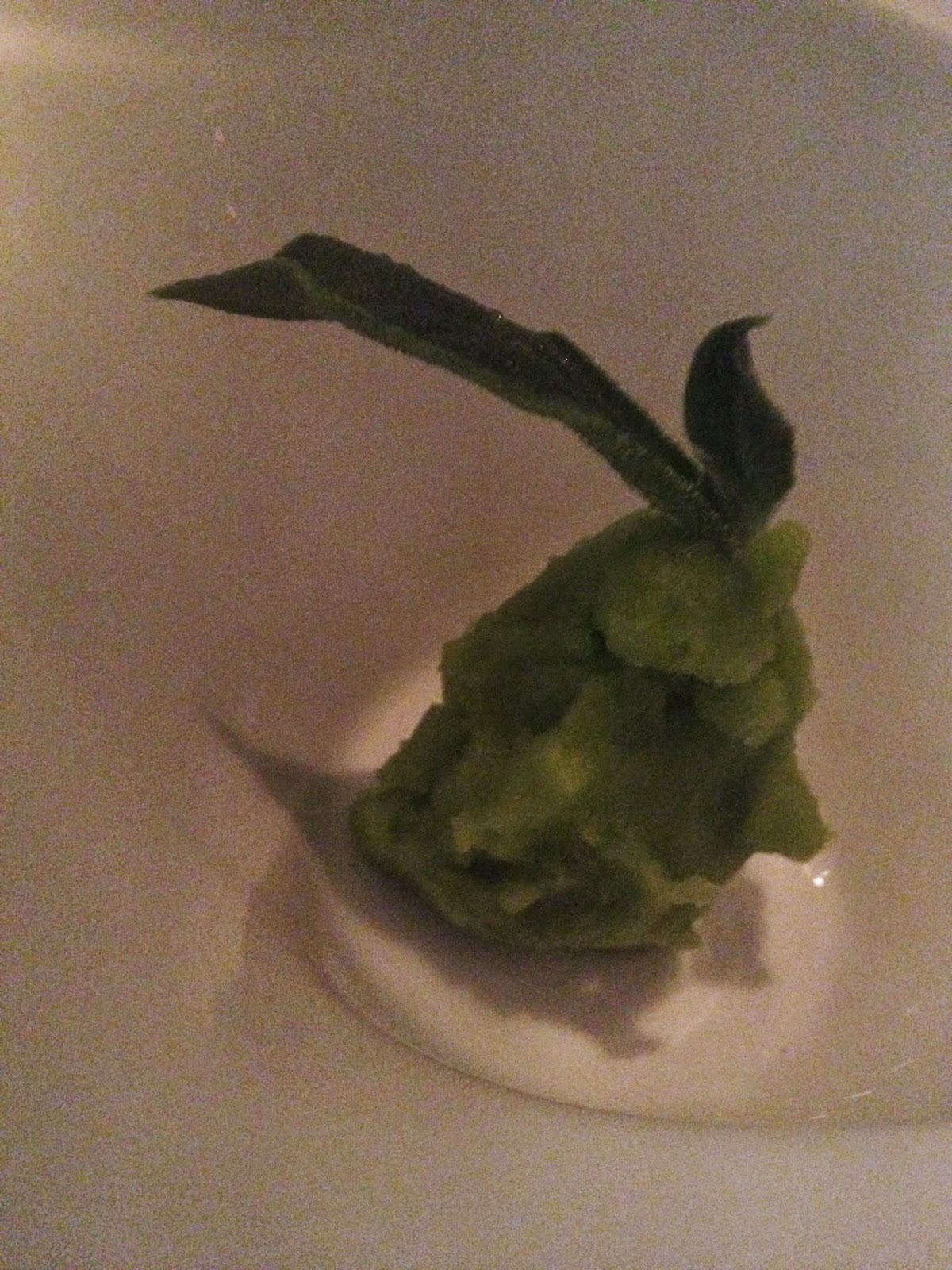 The final course of the tasting menu was listed as “barley flour sponge soaked in red tea with Tahitian vanilla cream”. It was perhaps not as pretty as many of the previous courses but more substantial and a nice eat. Essentially a baba like heavy sponge with sweet Chantilly cream, I’d challenge anyone to object to it but equally it was hard to get too excited about. 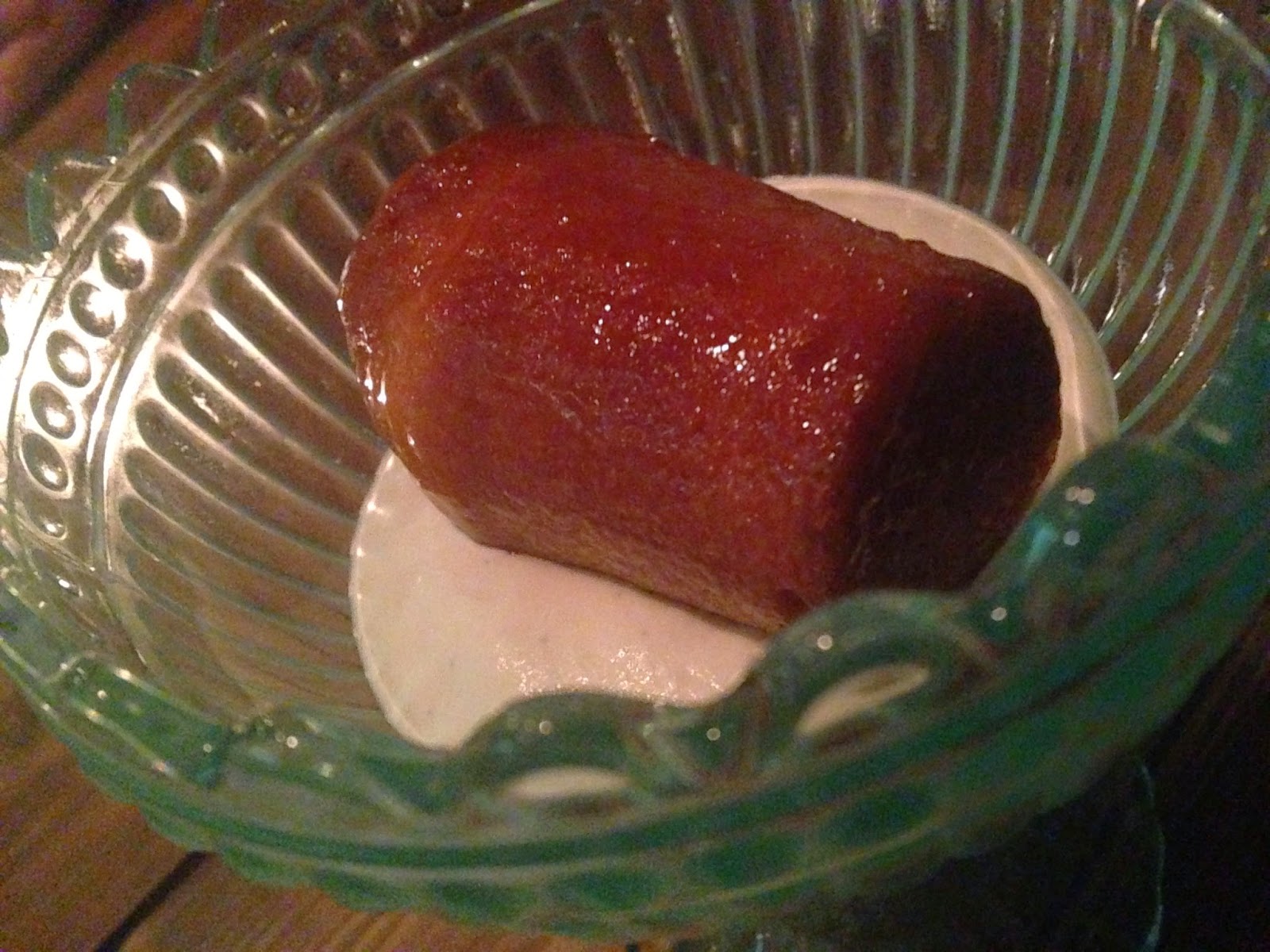 
Where Dabbous is sadly let down is on the service front which I would categorise as lackadaisical with an insouciant air of cool. Male serving staff are all of the bearded and braced variety missing only a Quaker hat but perfectly genial. The girls are all size eight or below and some had that slightly dead-in-the-eyes look that comes from extreme hunger and boredom and exude an air of processing tables swiftly so the annoying people will leave.


Whilst they have a basic knowledge of the dishes being served that doesn’t extend to detail about the ingredients used. My favourite interaction related to some really very delicious tiny waka mono green baby peaches from Japan served at the end of our meal. Or more specifically from Fukishima, a detail volunteered by our waitress. “Are you sure?” was our measured reply bearing in mind irradiated power stations and all that. The response came “well that’s where my boss told me they were from but he might have been joking“. I’m still none the wiser.  Other similar questions around ingredients or dishes were met with rather quizzical looks. Not your average Michelin star service. 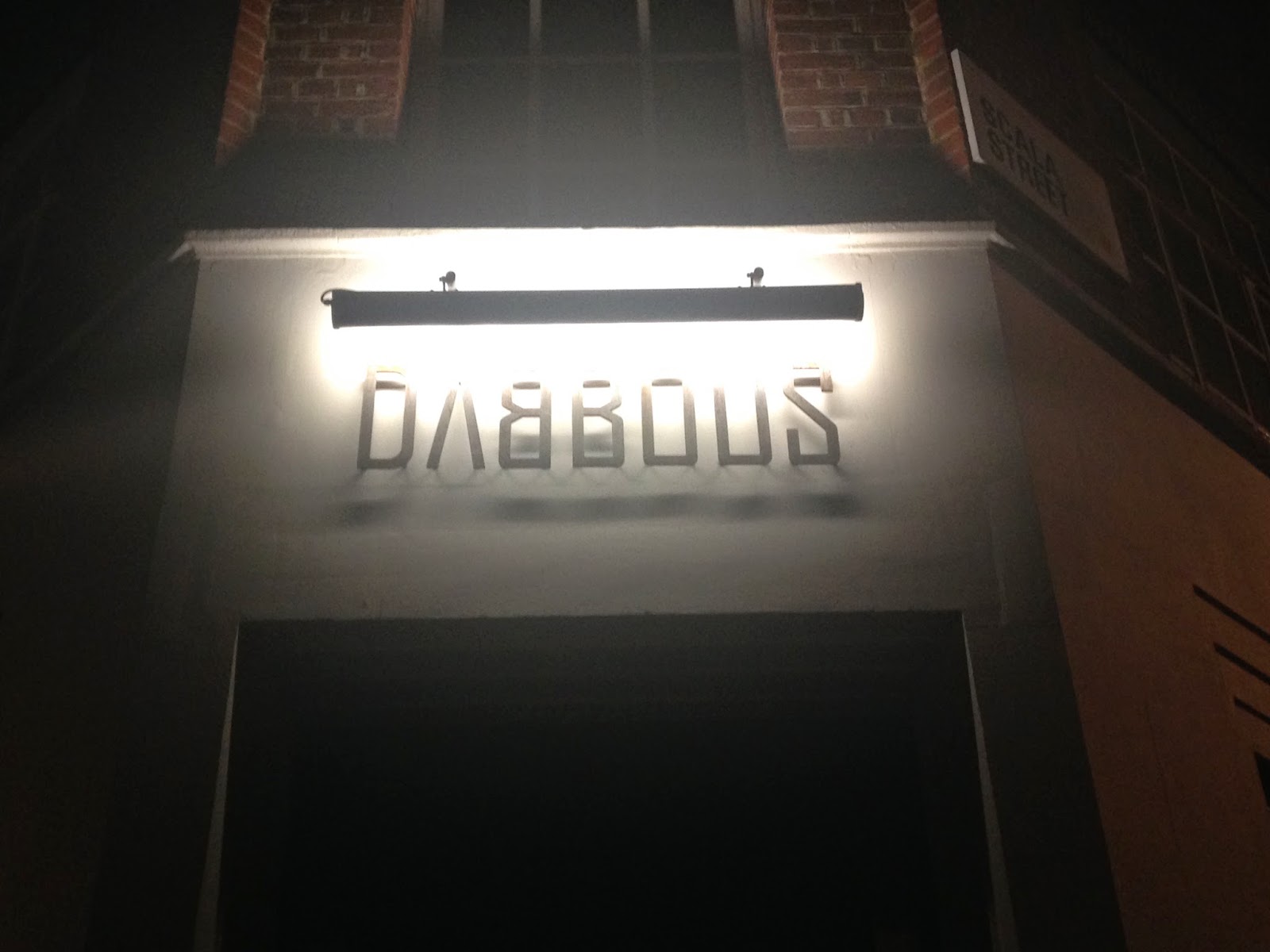 Between the volume of the dance beat based background soundtrack and the proximity of tables  to one another, you will hear everything from your neighbour’s table and they you.  To our left two very amiable chaps were planning a baritone ukelele tribute to Leonard Cohen trio (fabulous idea and initiated a very fun conversation) and to our right a very Eurotrash couple were discussing the ins and outs of their friends’ multiple divorces and transnational custody battles (less fun). The point being that we were so conscious of being able to hear everything they said that our own conversation was very stilted and limited to talk about our meal rather than catching up on our own gossip.

Price wise it is pitched at the right level for the food and the experience at £59 for the tasting menu. A set lunch (£28) and dinner menu (£48) are also on offer for 4 courses.

Dabbous is worth a visit just for those flashes of brilliance found in the coddled egg and the barbecue octopus but other dishes were not so great and its not a relaxing experience or somewhere that I would like to take someone for a special occasion. The egg is on the bar menu along with a rather delicious sounding beef shortrib sandwich so my temptation would be just to pop in for a cocktail and snack combination rather than fighting/ waiting for another booking.