Colombo feels as though its a city on the cusp of change. For years it has had a reputation as somewhere that you don’t stop for long before heading to one of the coasts and, similarly to the much maligned Bangkok, is as a grubby portal to the beaches. I loved Colombo despite the dirt and hustle and bustle. Various areas are in the process of regeneration but its fair to see there are plenty of places in the city that have already up and come and where you can have an excellent meal and a good night out.

Lagoon at the Cinnamon Grand Hotel is a glass box of a restaurant  with a terrace overlooking a small man made lagoon.  The premise is essentially that you visit the fishmonger’s counter, pick your weapon and it can then be cooked one of a multitude of ways. Seer is a fish that you see lots on menus in Sri Lanka – its a member of the mackerel family but is much bigger and essentially more similar to tuna in terms of size of steak and meaty texture. 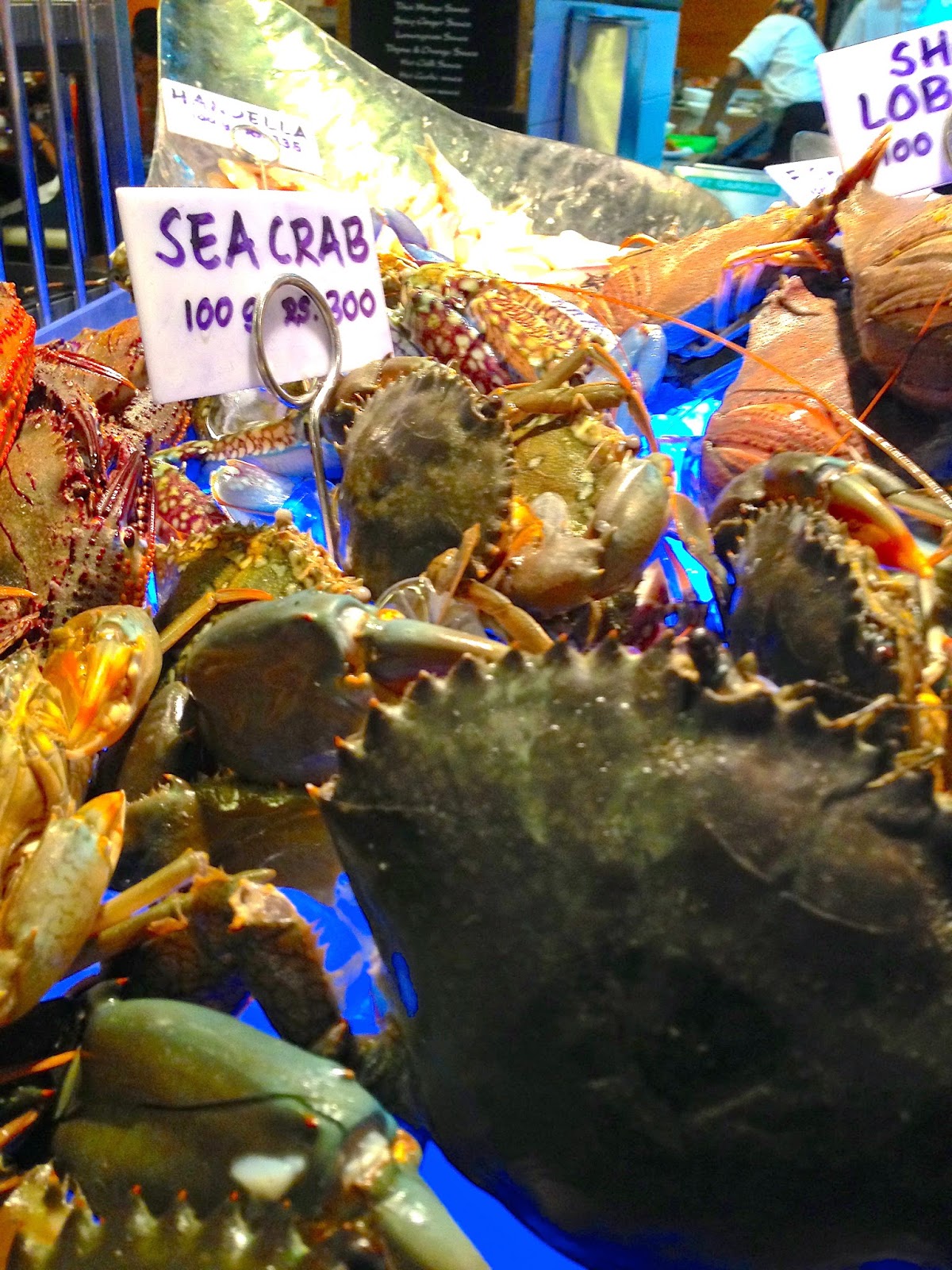 We ordered an array of food cooked in different styles to share. Cuttlefish in white curry sauce (a delicate creamy sauce – the Sri Lankan version of a korma you might say) was particularly good, fried crab claw cakes had a ginger tang were one of my favourites too.


Giant river prawns were covered in a spicy crumb and grilled before being drizzled in butter.
King prawns were in a spiced tomato and onion garlic sauce and fair blew my head off. 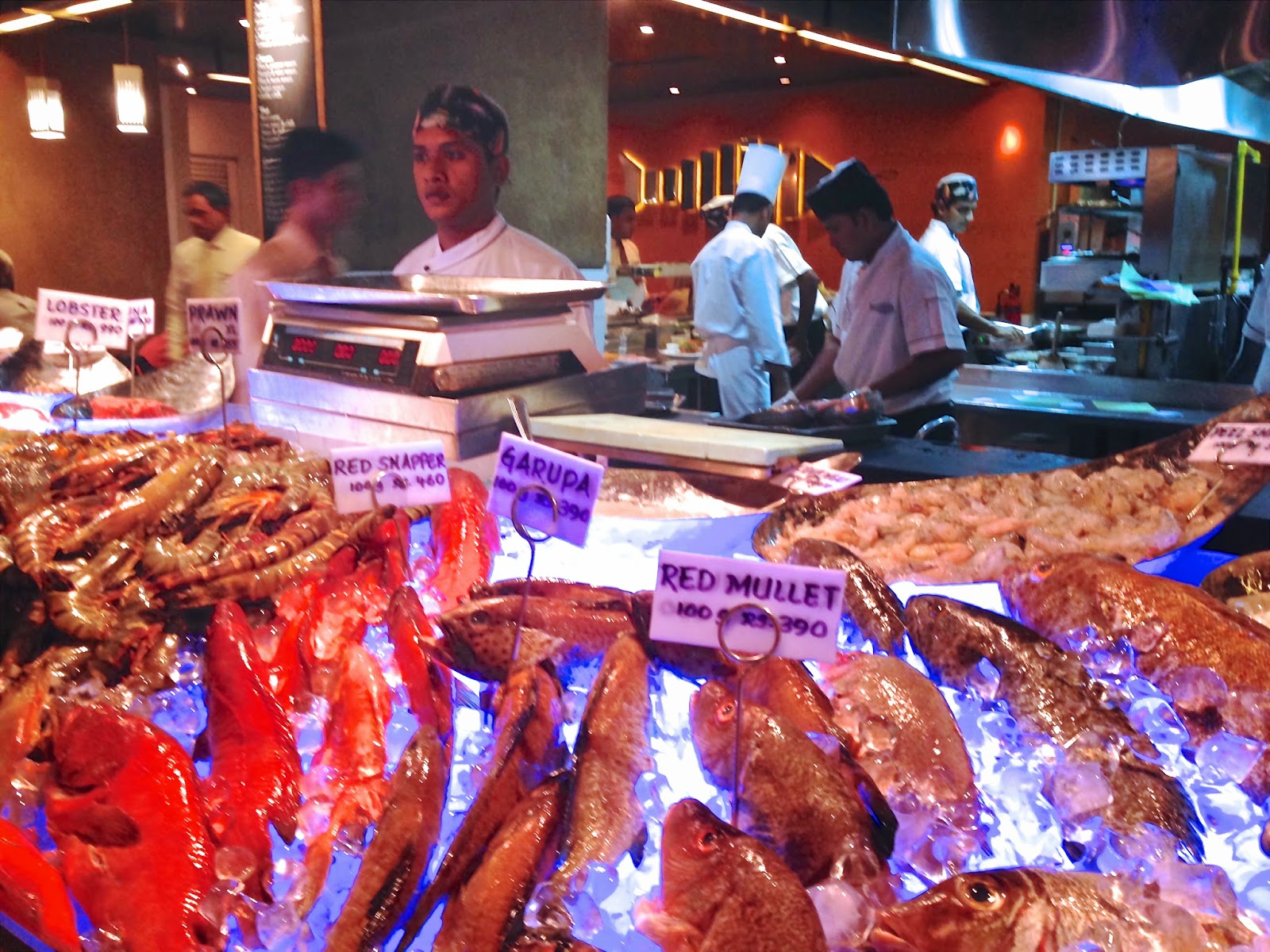 It is very much a hotel restaurant and ensures there is something for everyone. You can have your seafood with sweet and sour sauce or breaded with ketchup if you prefer- we just tried to go for the more local options. 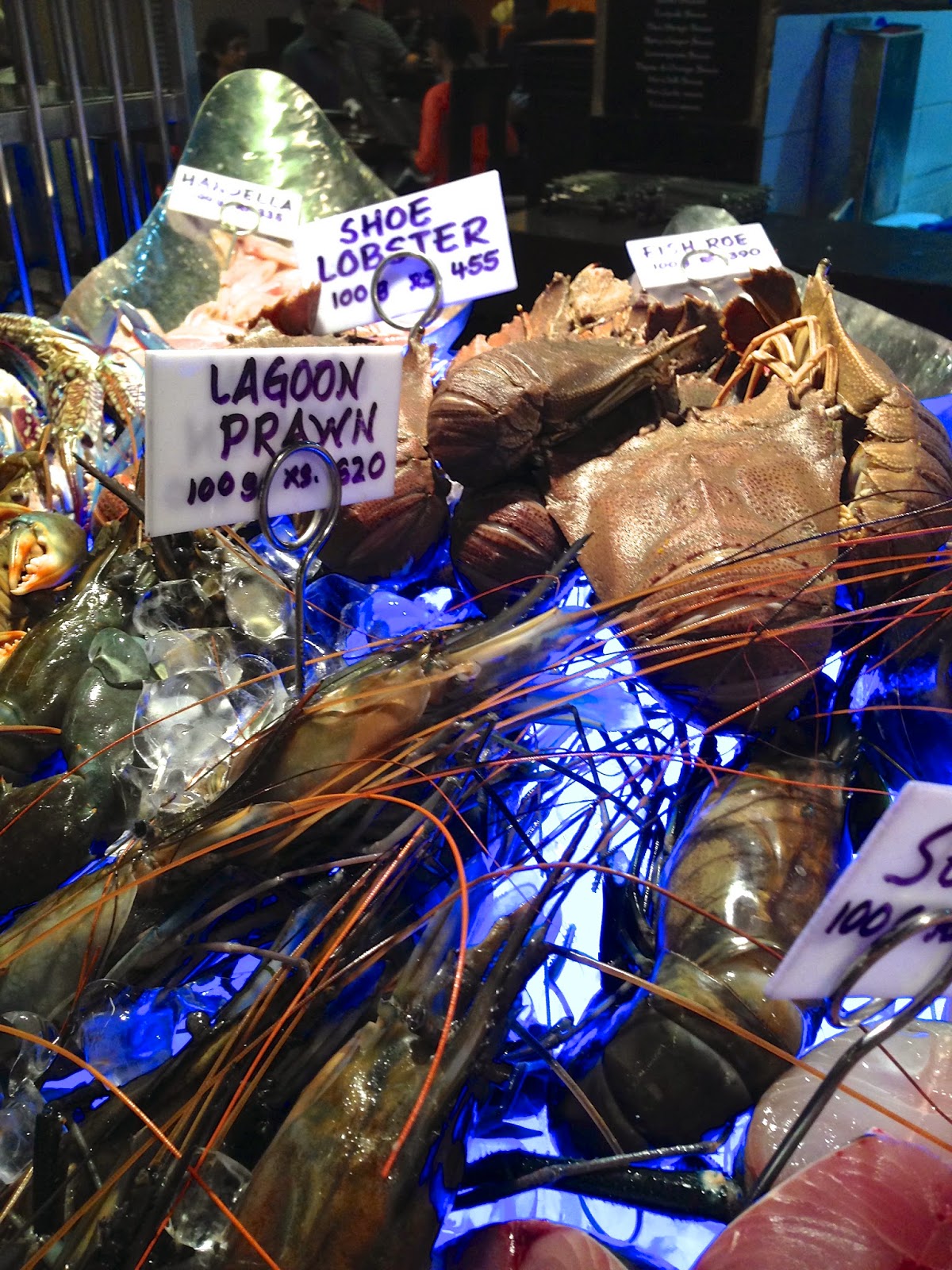 At the other end of the price spectrum is Beach Wadiya.  A 10 minute tuk tuk drive out of town it lies on Marine Drive opposite KFC but is well worth the journey. Sitting right on the beach front with the waves lapping the shore you feel instantaneously a world away from the humid hustle and bustle of Colombo town. 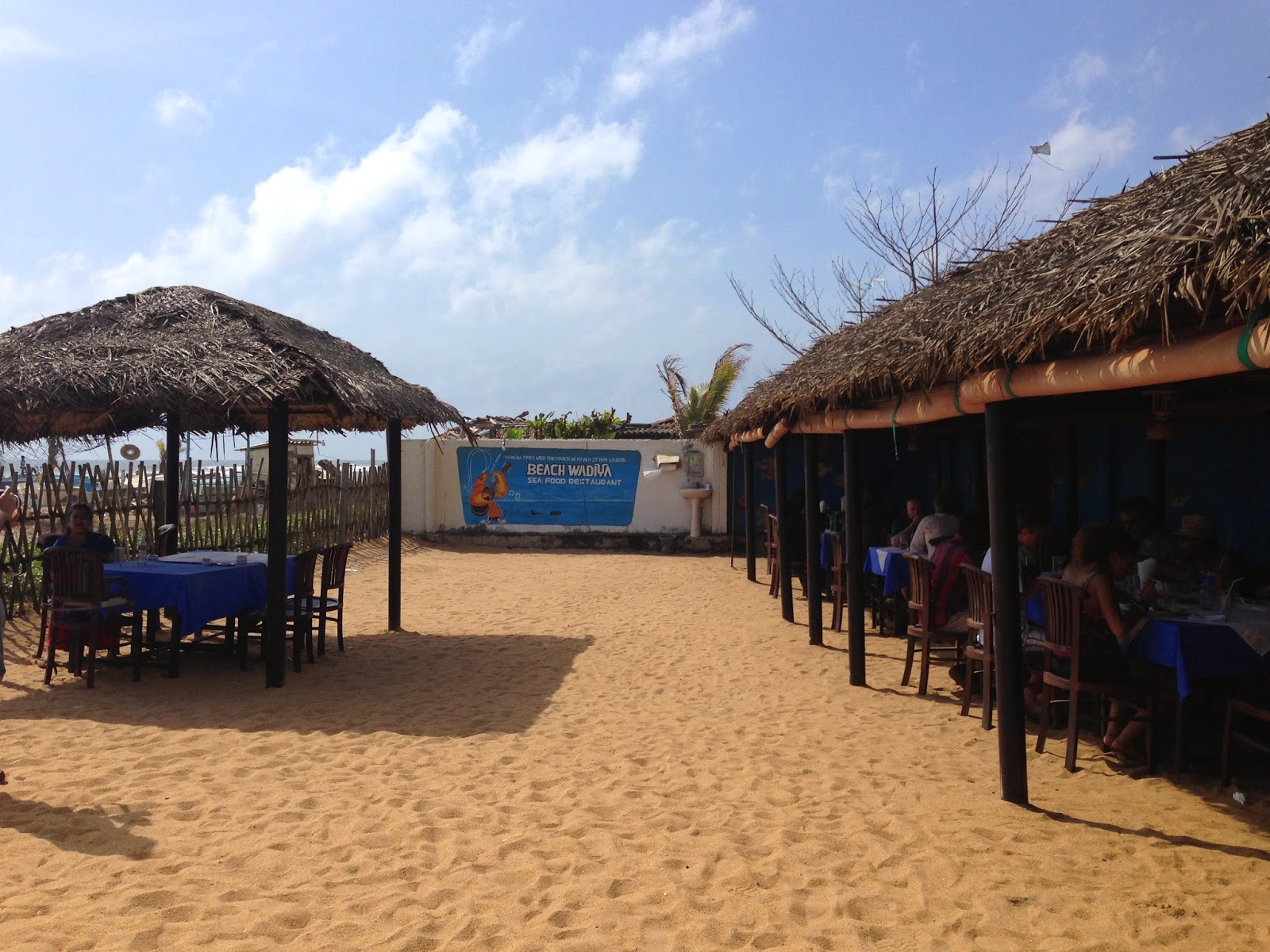 It has an unparalleled reputation and the walls are plastered in photos of the great and the good with manager Olwyn.  Despite being well into his seventies, he sits there day and night surveying his territory and its guests. Princess Anne is reported to have deemed it her favourite place in Sri Lanka and amongst her favourite restaurants ever. 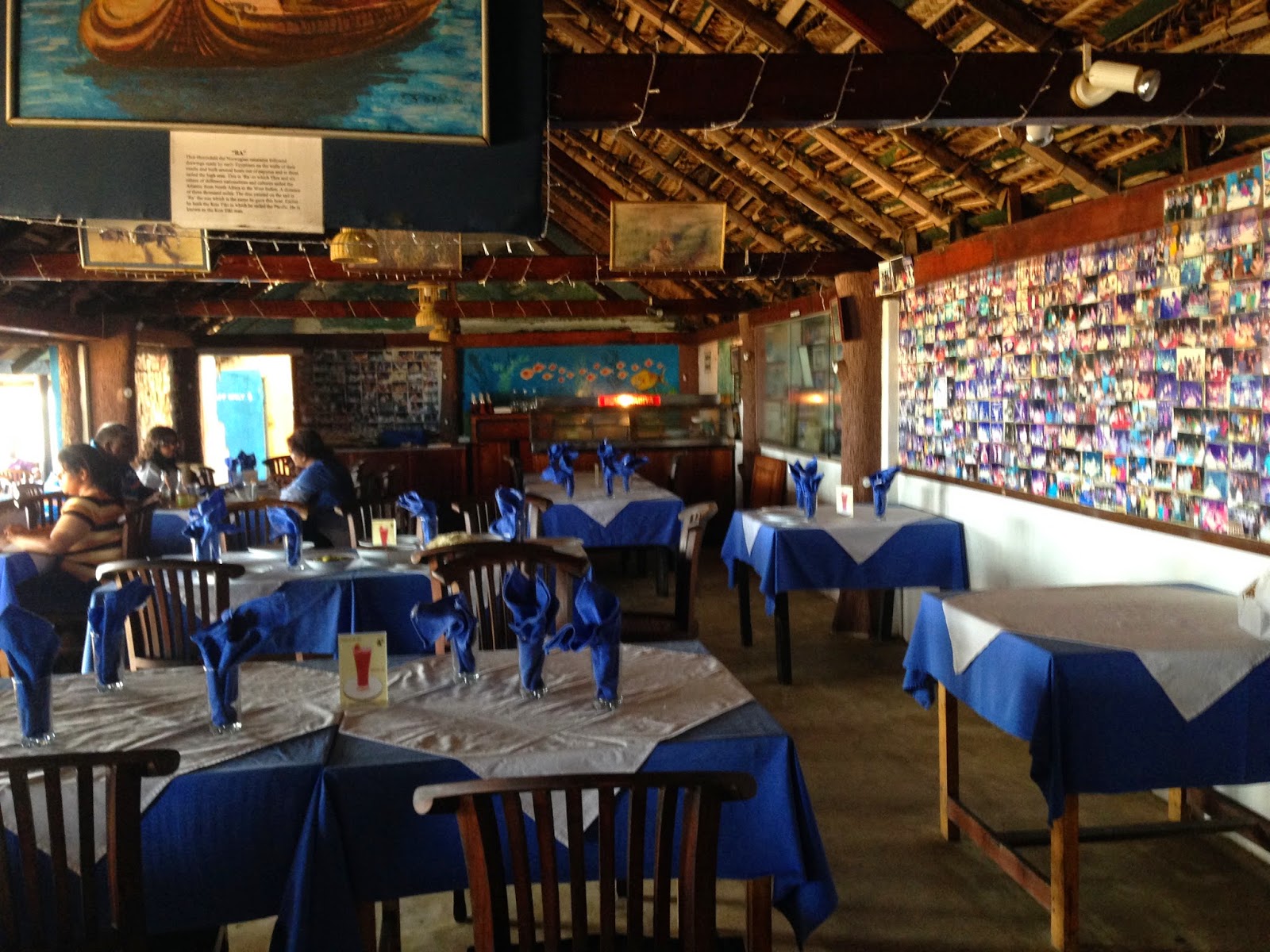 This was by far and away my favourite place in Colombo and a must visit as far as I am concerned. A large plate of king prawns grilled with garlic is around £3. The cuttlefish come in at around the same price and are cooked to order from the fishcounter

I ate there twice and never left with a bill over about £12 for everything including beers. Watch out getting back to the mainroad for a tuk tuk home after all that beer though! 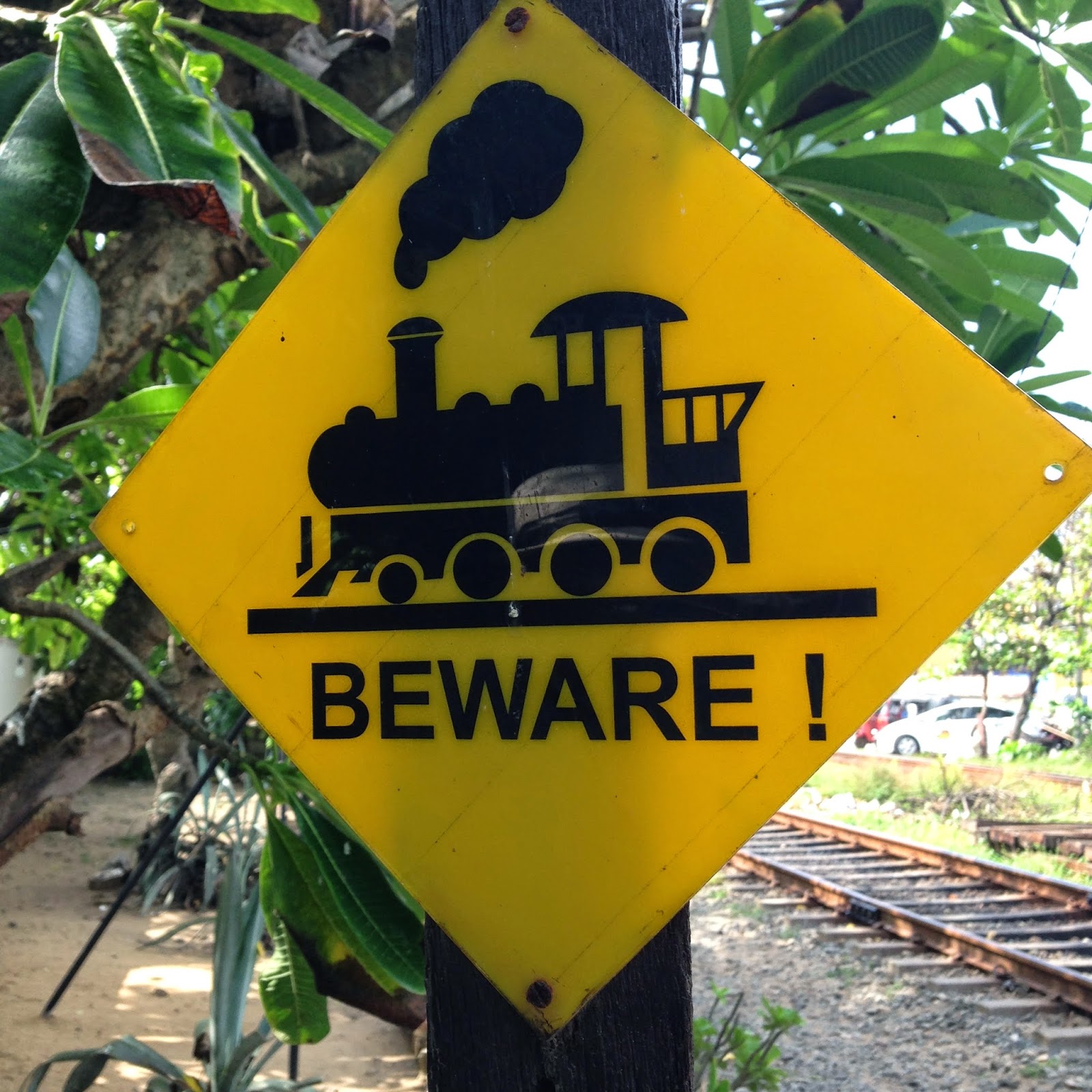 Curry Leaf at the HIlton turned out to be a pleasant surprise. I’m always a bit dubious of hotel restaurants especially ones that offer buffets. For a fixed price of 2750 rupees (£13) you get to select all the fish and seafood you like to be cooked to your preference and delivered to your table. Outside are various little streetfood stalls offering made to order portions of kottu, stringhoppers and roti. It was a briliant way to get a crash course into Sri Lankan cuisine before ordering the things I liked best at other restaurants during the trip.


One of the most popular places around is the fantastically named  “Ministry of Crab“. Co-owned by two international Sri Lankan cricket players, Mahela Jayawardene and Kumar Sangakkara (which makes them Gods in these parts where the first question any taxi driver asks you is “do you like cricket?”) the price tags are designed to match. The smallest crab size starts at 3000 rupees (around £15) which is megabucks by Sri Lankan standards. Mainly for that reason I decided to give it a miss. It is located in the Dutch Courtyard though which is a renovated colonial area with shops and bars etc in it and the heartland of an up and coming modern Sri Lankan scene and worth a visit even if you don’t eat at Ministry.

I wish I had been able to spend more time in the city to explore its burgeoning street food scene but the rest of the country awaited me. Hopefully this whistlestop tour gives you a taste of Sri Lanka though.