We were supposed to be meeting at the Savoy for drinks at 6.30pm. I got caught up in the shops. Then he got delayed at work. Then there was no 3G. I passed the time by ambling around Selfridges food and beauty halls buying things I shouldn’t have with my arms getting ever wearier with each bag added to the fray then I remembered the new “Le Chalet” bar on the roof. He agreed to hotfoot it from the City and I prepared to settle in with a cocktail list. 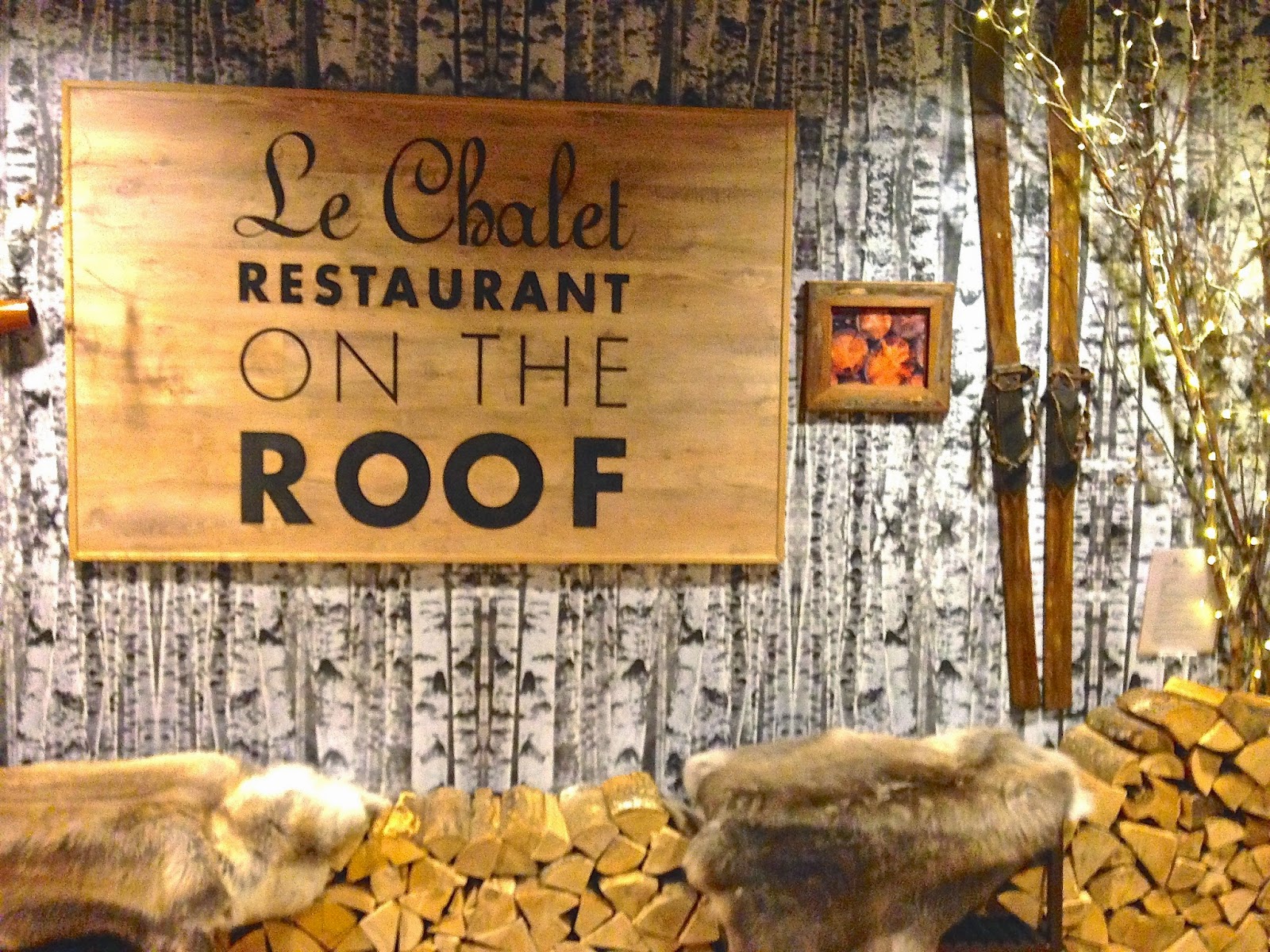 There is a lift near the main entrance dedicated to getting to the fifth floor and when you emerge its to a Narnia like tunnel of trees and fairy lights. 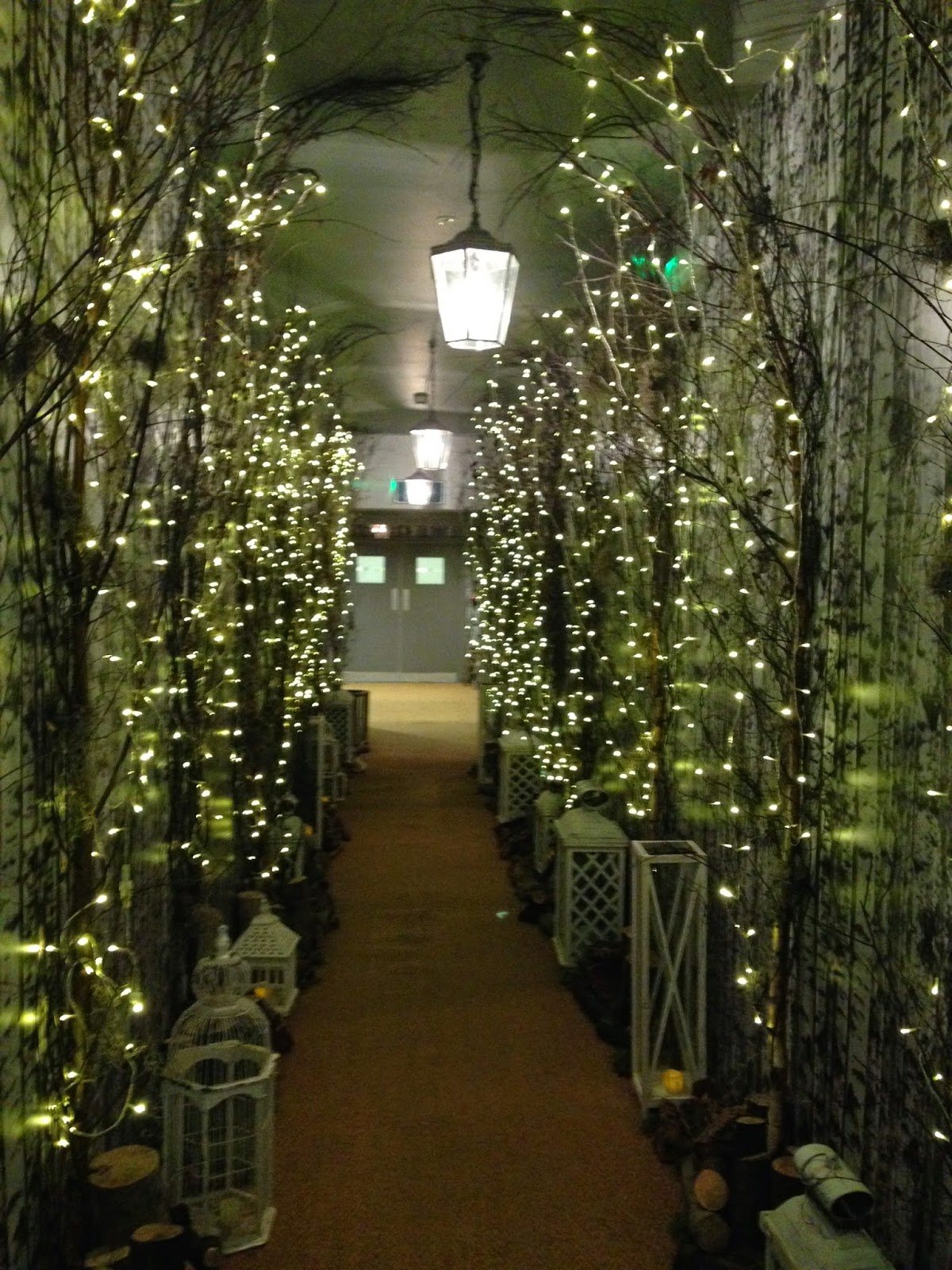 A honeycomb Old Fashioned was exactly what I needed post-shopping. The bar staff make them properly; swirling in a bit of whisky then a bit of ice then a bit more whisky until the glass is full. If I’m honest I couldn’t identify any distinct honey flavour but didn’t care as it hit the spot magnificently. At the moment its still fairly warm so with the heaters and flames so I was in dire need of a cold drink but the alcoholic hot chocolates look obscenely good and I can’t wait to drink one outside on the roof another time.  How good does a Cuban sound- Rum, Cinnamon & Chocolate? Or Hazelnut almond liqueur, dark chocolate and hot chocolate.

The dining area is decked out in fairy lights, lanterns and mini alpine trees all adding to the low lit glow. 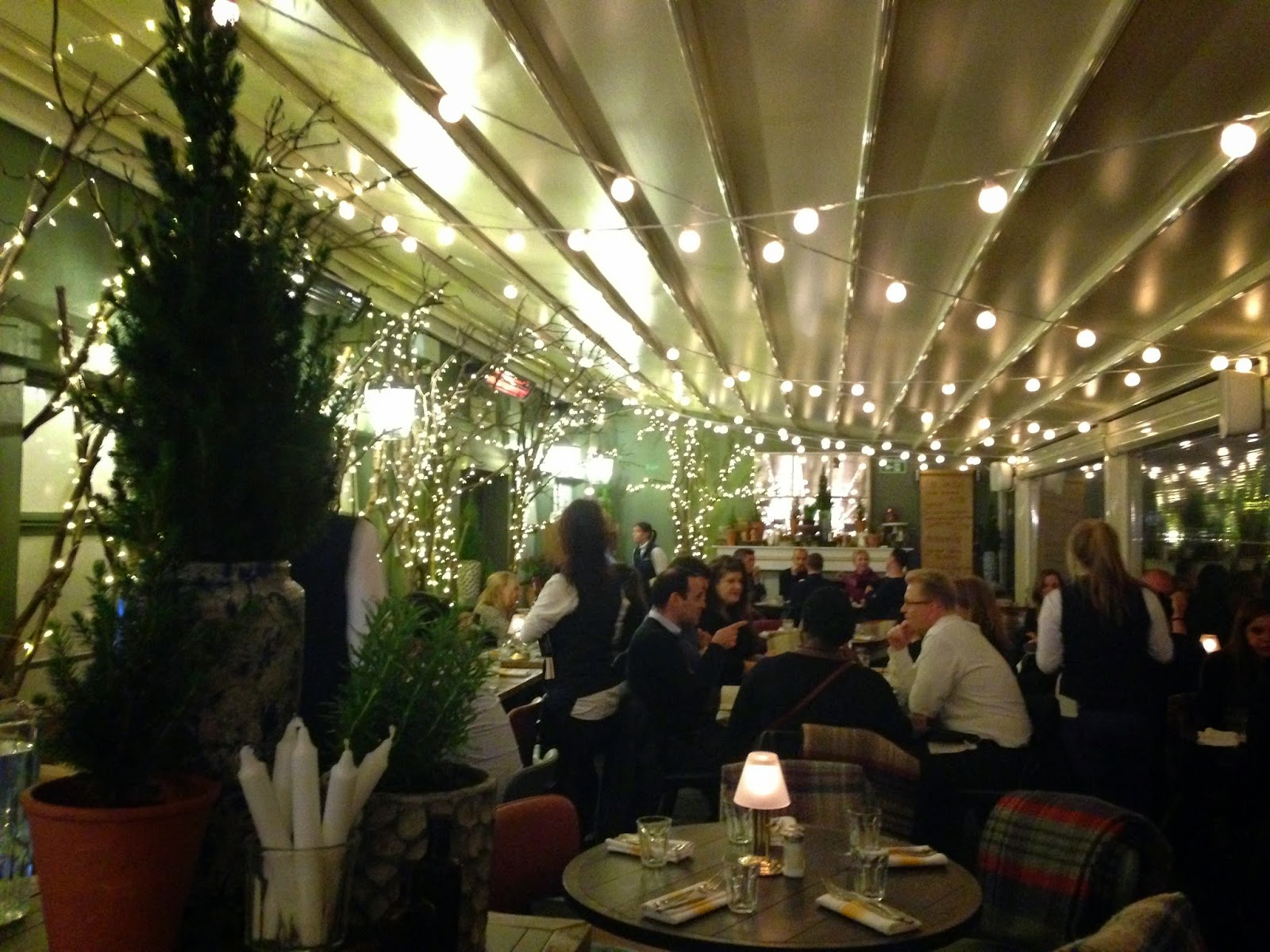 Granted, the name is far from imaginative but I suppose you know what you’re getting. Yes, there’s also a strong risk that Arabella and Jasper will be knocking back hot chocolate and braying about apres ski in Courcheval/St Anton/Klosters and the time that Squibby once skiied down a black run topless after one too many schnapps. Yes, its also a bit early for Alpine scenes but come Christmas it will be fabulous, I promise – stop fighting it and go with it, you just need to get into the mood.

Run by the people from Q Grill in Camden, the kitchen offers a varied menu both in terms of style of food and prices- mains range from £13-40. It is a bit of an exercise in crowdpleasing with some dishes veering from the theme (not sure how ‘Alpine chalet’ a  but I’d expect that Selfridges get a good deal of input into making sure it fits every demographic. 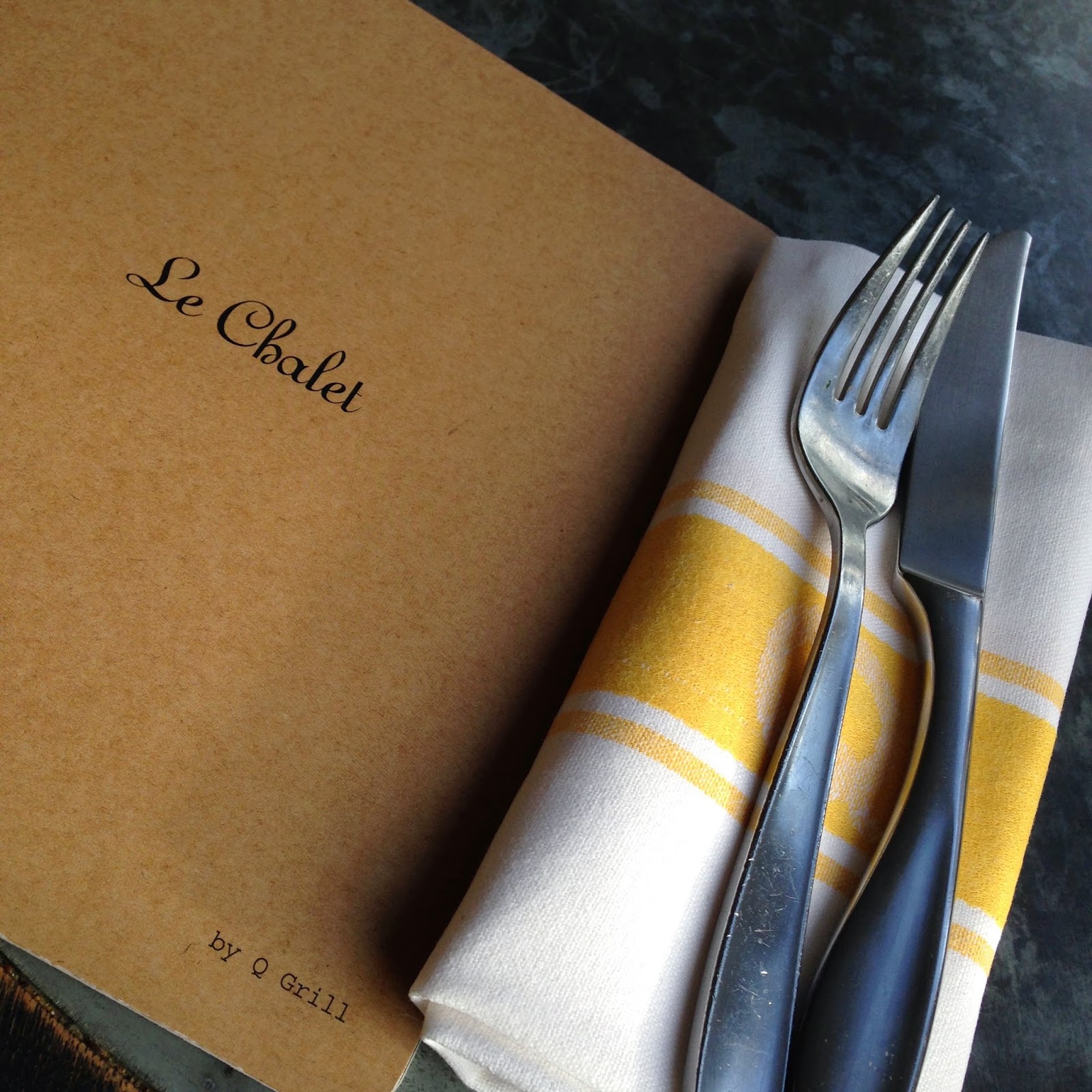 Barked Shortrib with caramelised parsnip mash was a no brainer sitting squarely in the mid price bracket at £19. I’m not entirely sure what made the shortrib “barked” but whatever it is I hereby decree that all shortrib from henceforth and forever more should be “barked” because it tasted bloody delicious. As delicate and prone to falling apart as Kerry Katona on a reality tv show, its held together only by a charred outer crust and something unidentifably sticky but sweet. Just to make you feel like you’re not a complete carniverous neanderthal there’s also a sprig of something green and utterly superfluous, excellent. 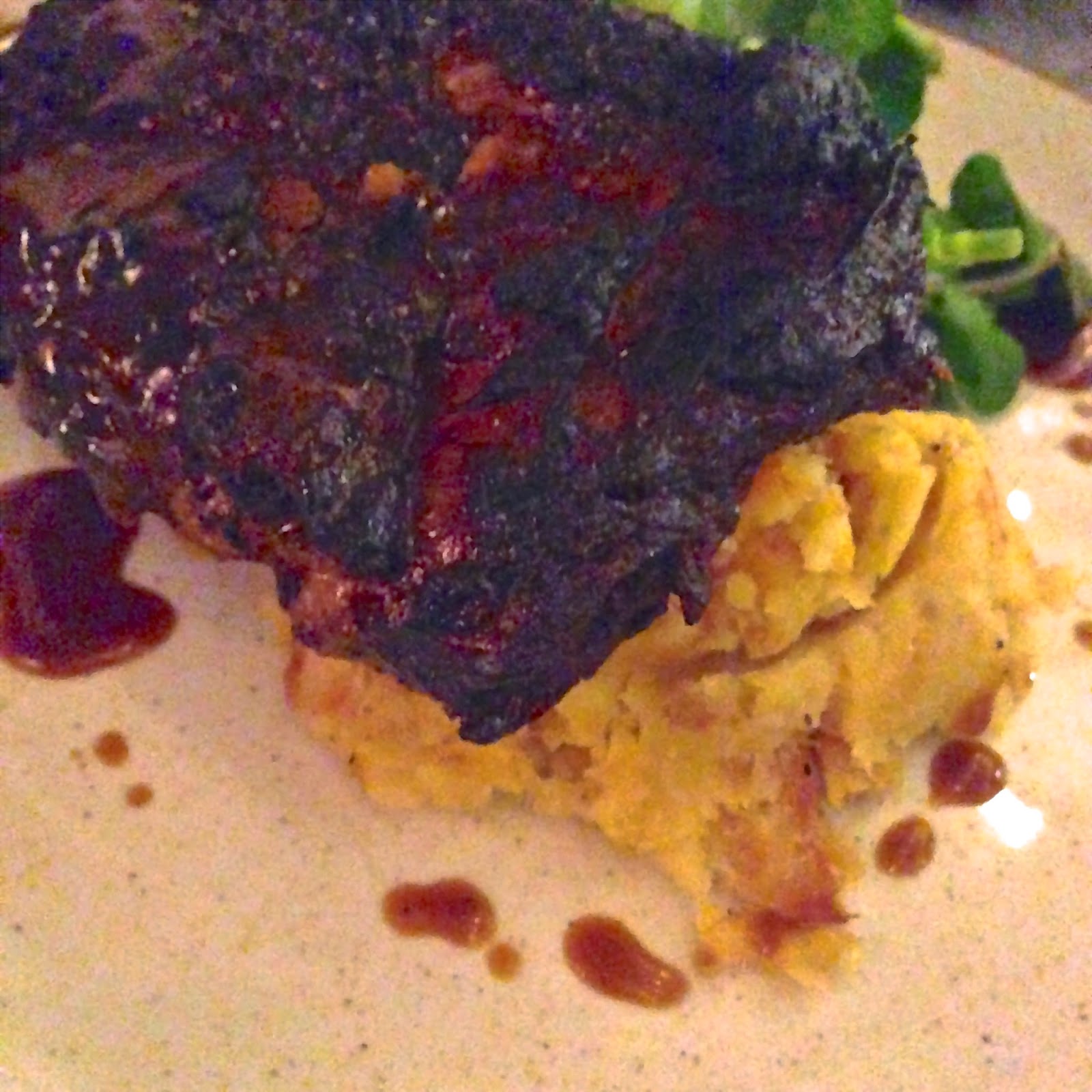 Buttermilk chicken schnitzel was an absolute triumph. Hammered thin, coated in a light, crisp coating it still managed to be really succulent. The accompanying blue cheese fondue was one of nicest things I’ve eaten in ages; smooth and creamy with a subtle blue cheese tang – not in the least bit overpowering. 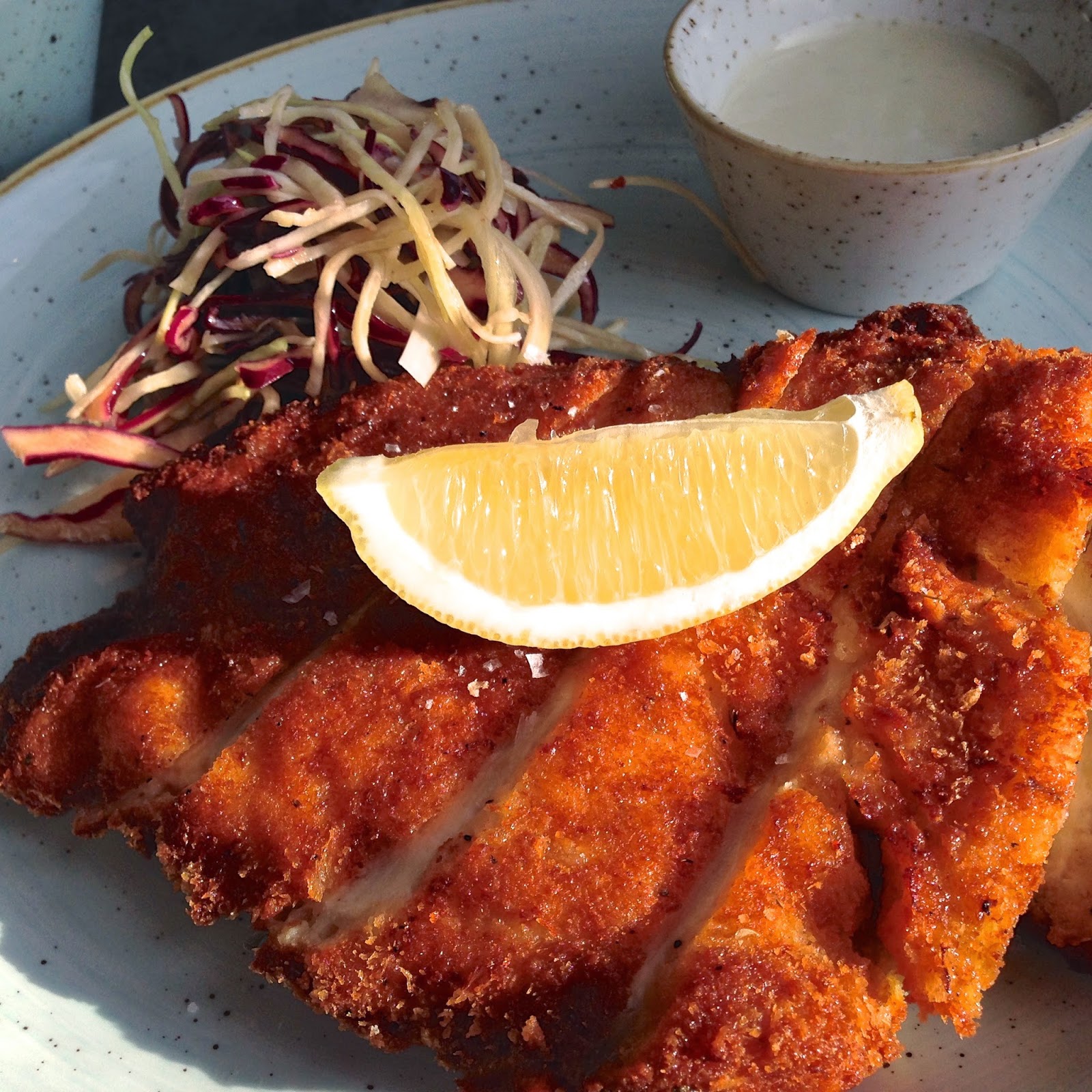 A side order of broccoli and chilli may not have been the most exciting dish Ive eaten this year but it was great with the schnitzel and made me feel a modicum towards healthy. 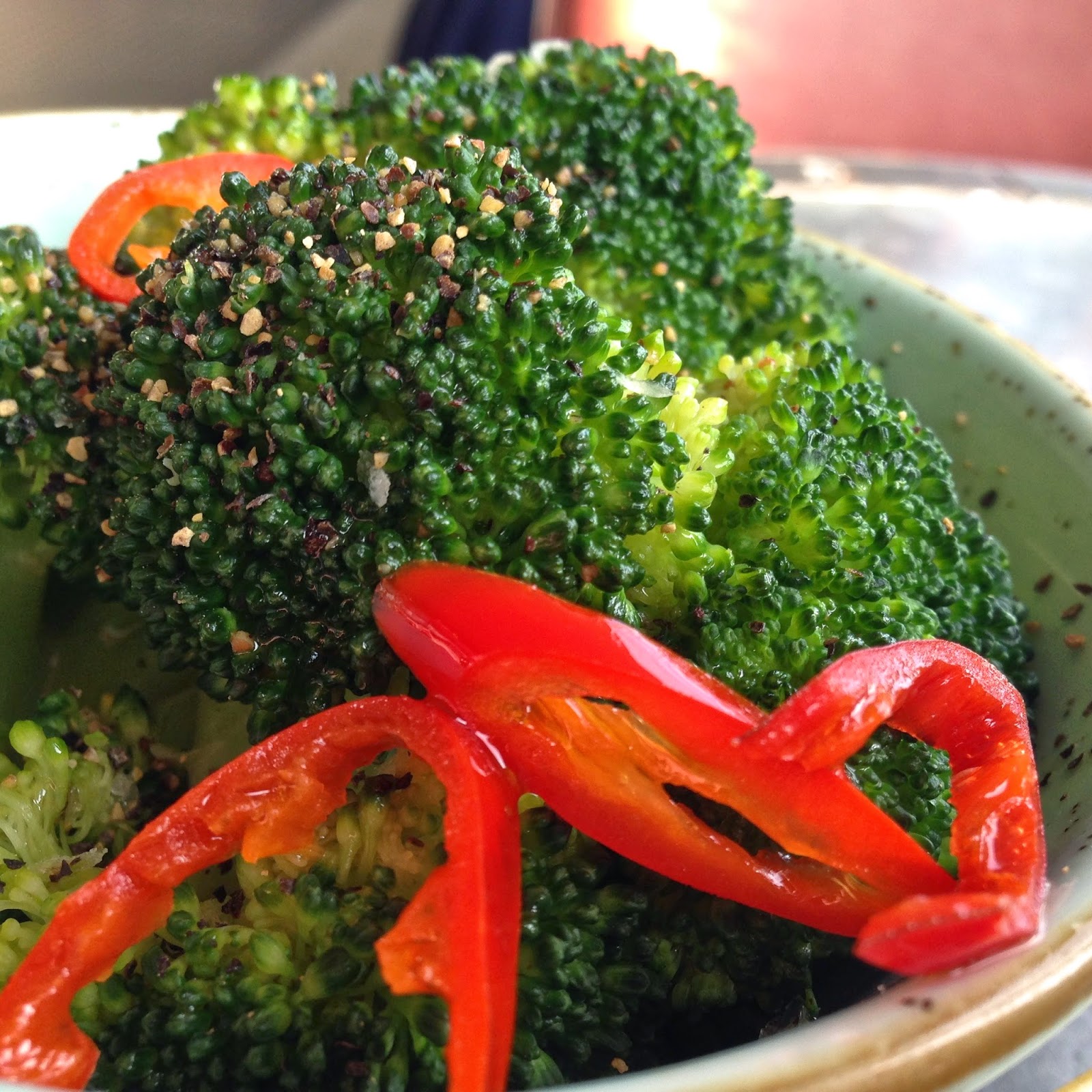 Dessert was skipped in favour of a bag of macarons and chocolates that I’d accidentally acquired from Pierre Herme, Pierre Marcolini and Artisan du Chocolat downstairs in the foodhall (so many good things in one place!) but the fabulous sounding “Apple Struesel with Lashings of Custard” did make my mouth water. “Egg Nog Snow Egg” still has me baffled…

There was some confusion over the wine, I thought I’d ordered a Chilean Cab Sauv and wasn’t paying attention properly and before I knew it the Waterford version from Stellenbosch had been poured. At £60 a bottle its overpriced but a cook hearty cab sauv rich in ripe blackcurrants.

If you’re a cigar fiend they also have a decent humidor and lots of outdoor seating and blankets to enjoy it.  Like all the rooftop pop up restaurants, it won’t be around forever is bound to get busier towards Christmas so get down there as soon as possible.

Would I go back? Yes definitely, I’ve been dreaming of the food all week since I ate there!


Highlights: the location (helped by the fireworks, granted) and that Schnitzel and blue cheese fondue


Summary:  The overall effect is even cheesier than my blue cheese fondue but its a lot of fun. Go and do it.


I eat out far too much for my own good and as a result its pretty rare that I get fixated on a dish but that schnitzel and blue fondue kept sticking in my mind so I found myself back there only a week later mid shopping trip begging for a table for one. It was just as good the second time and even better when accompanied by boozy hot chocolate. Its gone up half a point as a result….