I love how the restaurant world evolves so quickly in London. A few years ago options  for Korean restaurants would have been limited to the occasional local place run by Koreans for other Koreans with any public comment on their cuisine likely to involve manifestly unfair references to eating dog. I’m not a fan of the proliferation of start-of-the-year “food trends for 2015” articles littering the internet but you have to admit that a lot of them have hit the nail on the head with a nod to the continued explosion of last year’s Korean theme.

Granted, a lot of focus has been on fried chicken and kimchi pickled vegetables but Jinjuu is so much more than that.  Billed as a Korean fusion restaurant and also described as being home to a ‘celebrity chef’ I have to admit I wondered what I was letting myself in for. Fusion can be very hit and miss and quite frequently restaurants that rely on PR about “celebrity chefs” focus on that fact because the food ain’t up to much. In this case I was very wrong.

Chef Judy Joo is not someone I was previously familiar with but I like her story, as a desk chained lawyer it inspires me. Starting out as an engineer before becoming a Morgan Stanley trader, sensibly she quit to work at Saveur magazine and become classically trained. A move back to London lead to her working for Gordon Ramsay and for Time Out before involvement with the restaurant at the Playboy Club which, bar various Iron Chef interludes, brings us right up to the present.

A UK tv show “Korean food made simple” is imminent on the Food Network so if Ms Joo is not yet a household name its likely she soon will be. If she can show me how to make food half as good as what I ate on my first visit to Jinjuu I will be watching…..

The interior is classy, the bar upstairs is dark and sleek perfect for dalliances in dark corners over cocktails whereas the restaurant area downstairs has booths and tables all with a view of the kitchen where flames leap from hissing hot woks. In summary a hybrid of Hakkasan meets Flesh & Buns. 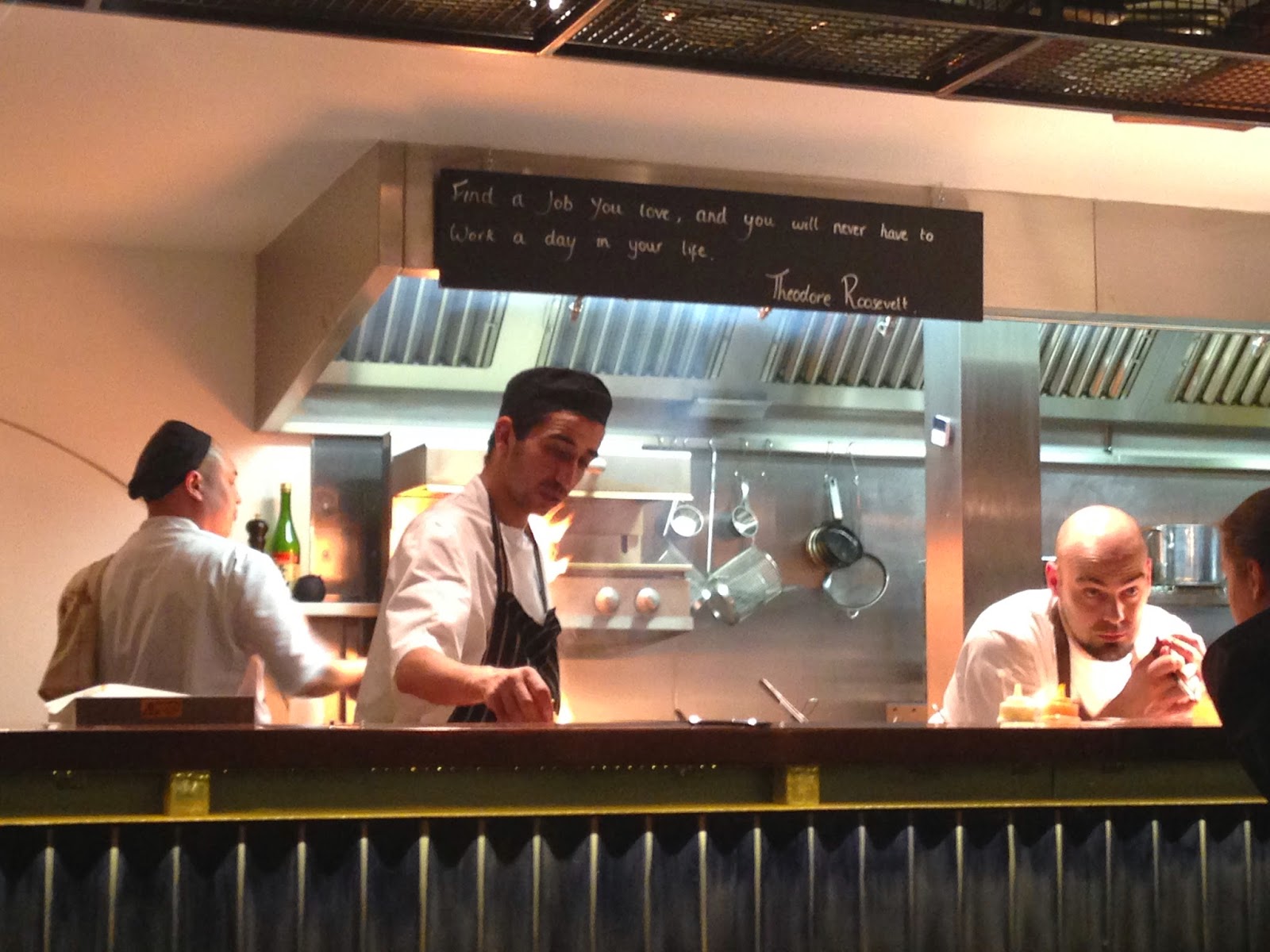 Posters of androgynous K-pop pretties adorn the walls of the loos with a matching soundtrack to accompany ablutions. That and a door covered in Korean Spam adverts because… well just because I guess. 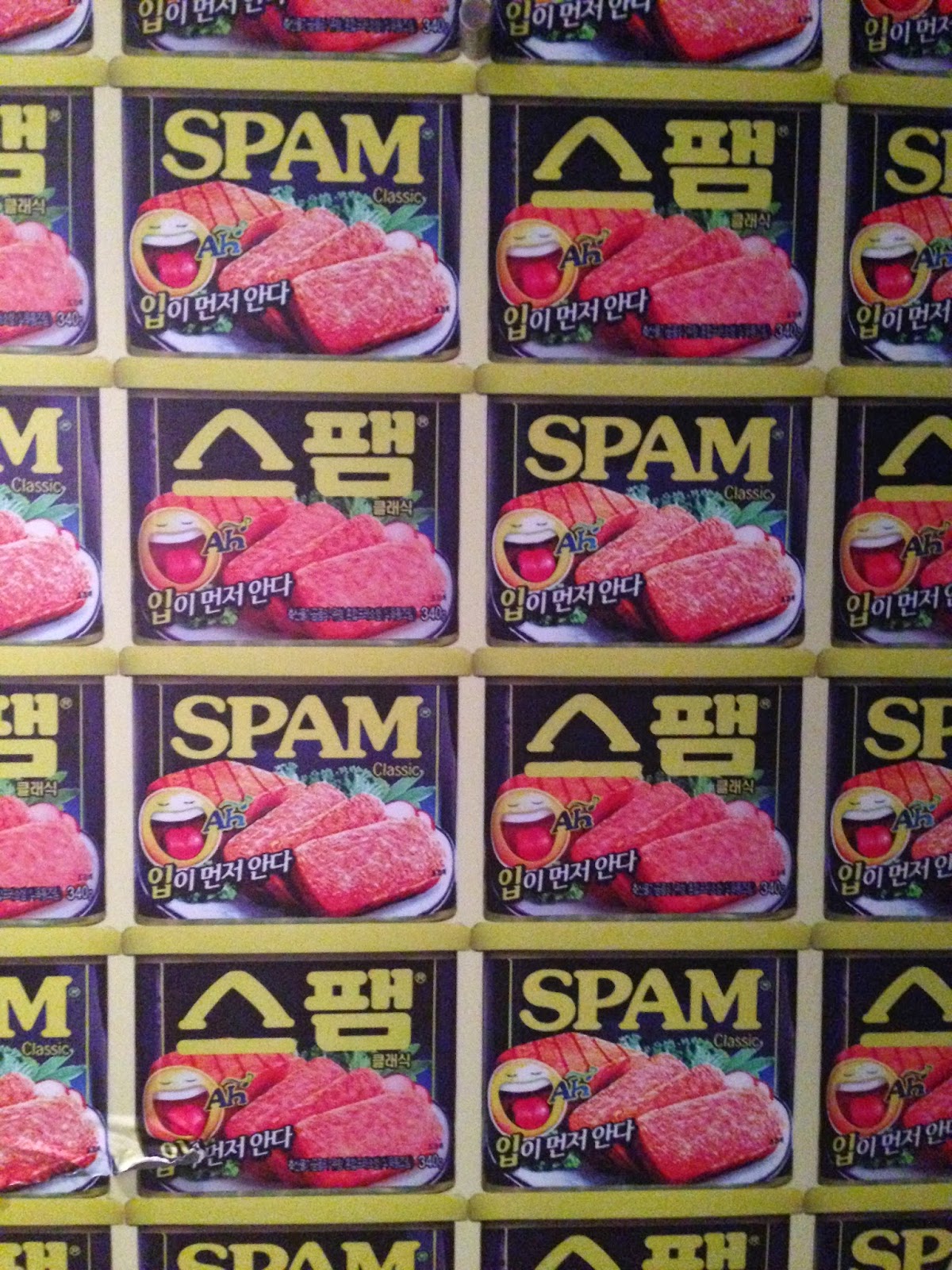 Although Judy Joo is the name in all the press releases (and by all accounts is presently qite hands on in the kitchen – she was there when we ate) the man with his hands firmly on the tiller is Head Chef Andrew Hales who’s background includes stints with the Rouxs and the Pont de la Tour before a role as head cheef at the Playboy Club which last placing all three keys chefs have in common.

Enough about the facilities though and onto the food. Edamame were perhaps the most perfect specimens I’ve ever tried. Covered in a dusting of spices (some kind of fish sauce and garlic definitely featured in the mix) they were both fiery and juicy in equal measure and infinitely munchable whilst poring over the menu. The portion is also enormous and most of them came home in a tub and were just as good cold in front of the tv later on. 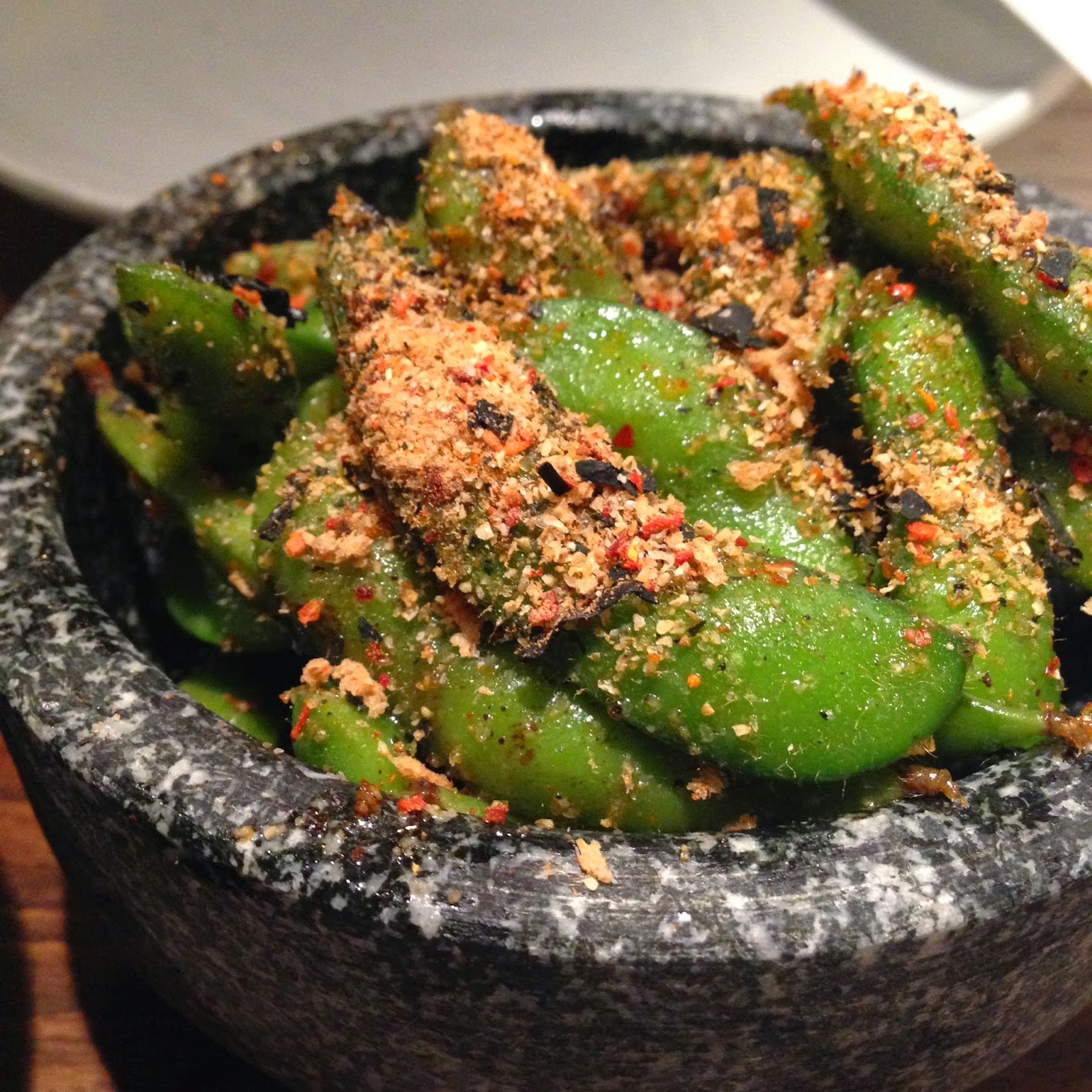 The menu is divided between small plates known as “Anju” designed as snacks to accompany drinks and larger main courses. You could order a small plate or two each before a main or pile in and all share a selection.

Sae-woo pops (£7.50) are deep-fried minced prawn balls on a stick with a fiery gojuchang mayonnaise to dip. They come to the table piping hot with a crisp shell on the outside giving way to a springy prawn rich filling. If your visit is anything like mine you will be hard pushed to see a single table not adorned with a sputnik of sticks bearing these treats. 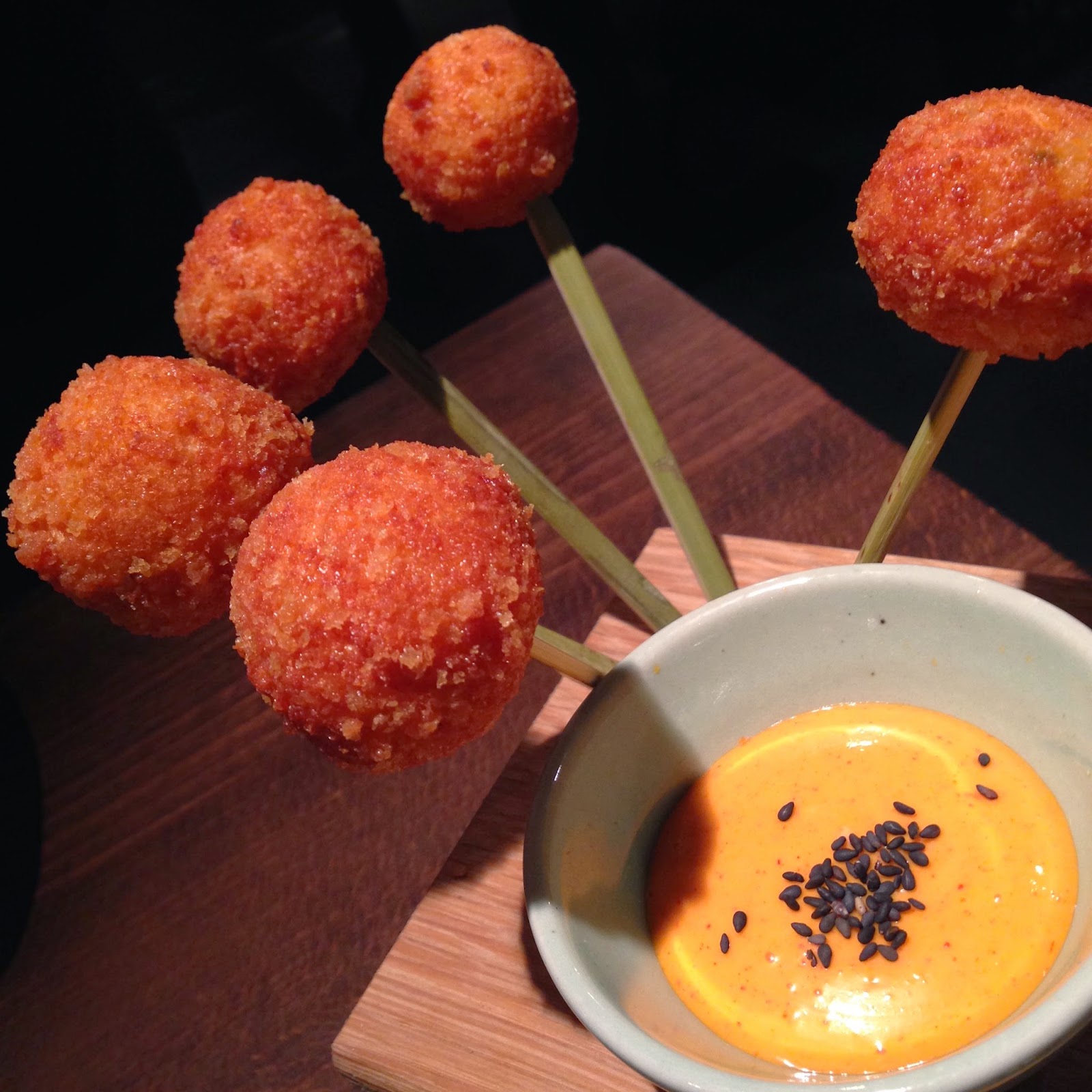 Mandoo steamed beef and pork dumplings were good, packed with meat although the skins were not quite as thin and were a little tougher than a good dim sum. 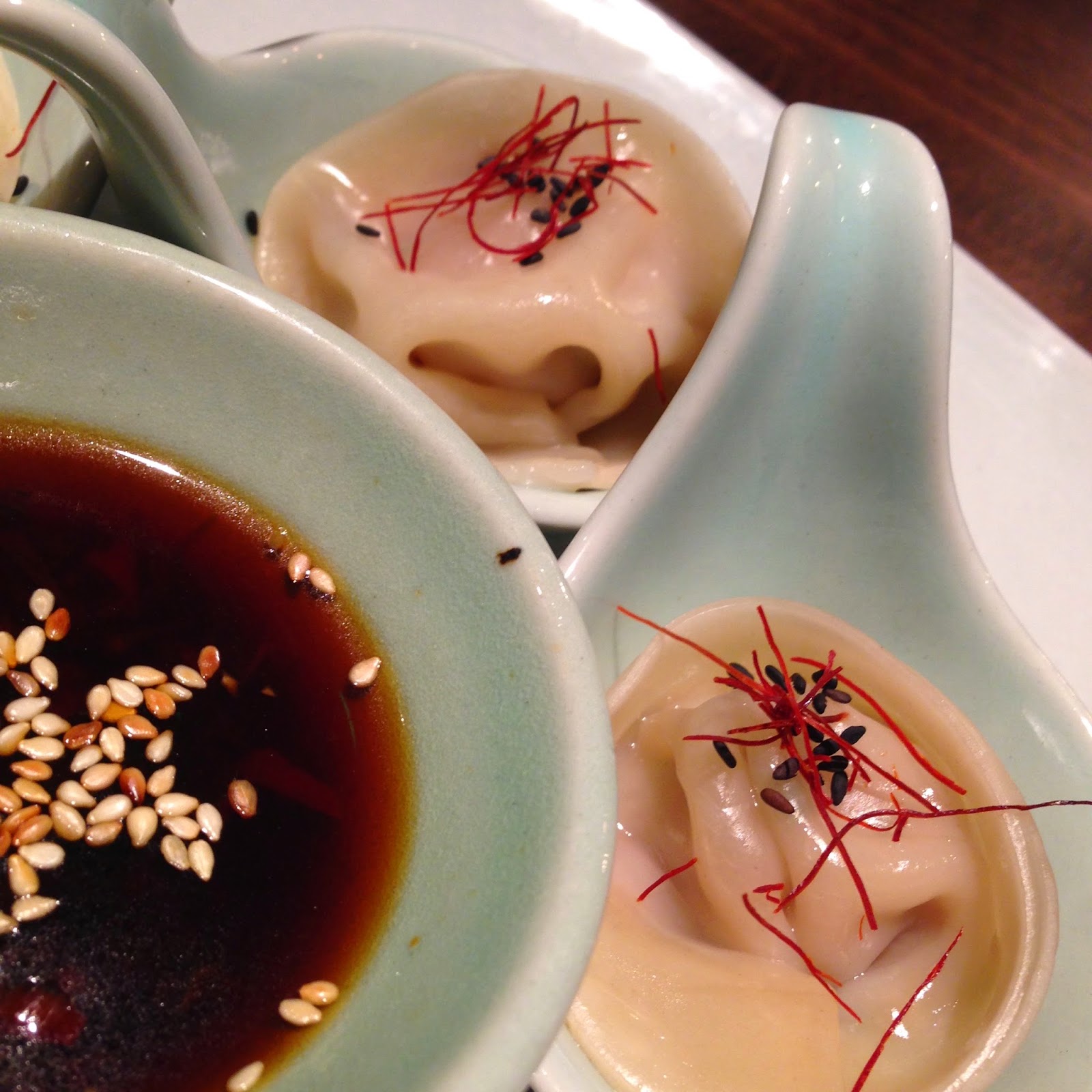 Fried chicken sliders were just ridiculously delicious. Fried flavoursome thigh chicken meat is tender and juicy with an explosively crispy coating. Sweet, sticky gojuchang red sauce and black soy with mayo all keep it moist and put you in peril of a drizzle down your chin. A mini brioche bun is almost into perfection territory; scratch that- it is perfect! I even ate the lettuce because pulling it out would have risked losing some of that precious sauce and that’s saying something. 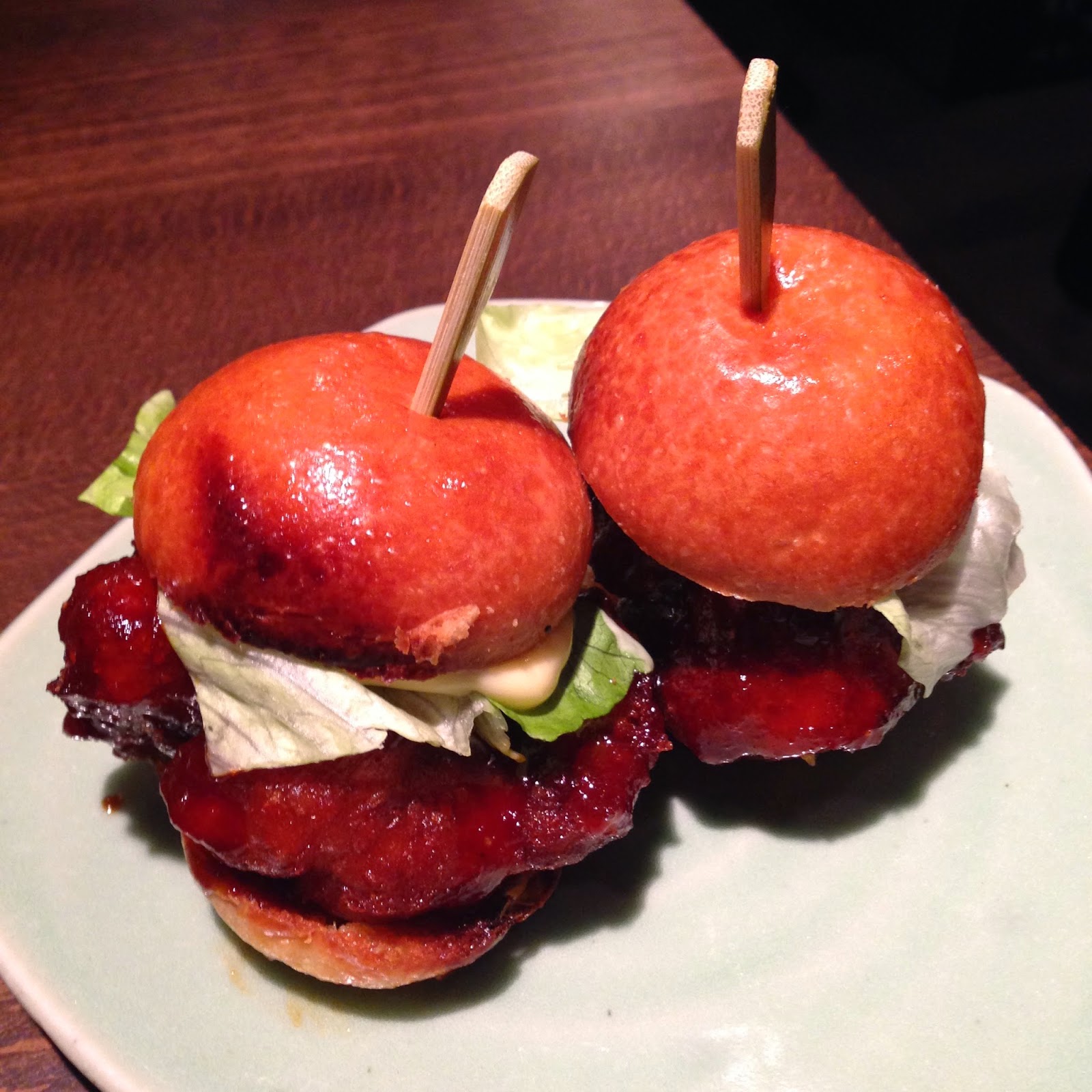 After the sliders it was impossible not to try a portion of the fried chicken. A choice of either thigh or wing makes up the options.  For larger groups you can plump for an entire chicken deep fried whole. The sauce served with the fried chicken is little short of the crack of the sauce world. I kept finding myself pouring more and more on my plate and frankly only just stopped short of needing physical restraint from pouring it onto a spoon and lapping it up like a pussy cat.

The highest praise possible is that both of us simultaneously developed criminal tendancies and contemplated snaffling it away in our handbags.  A plate of radish cubes with black sesame seeds act as an effective palate cleanser after all that grease. 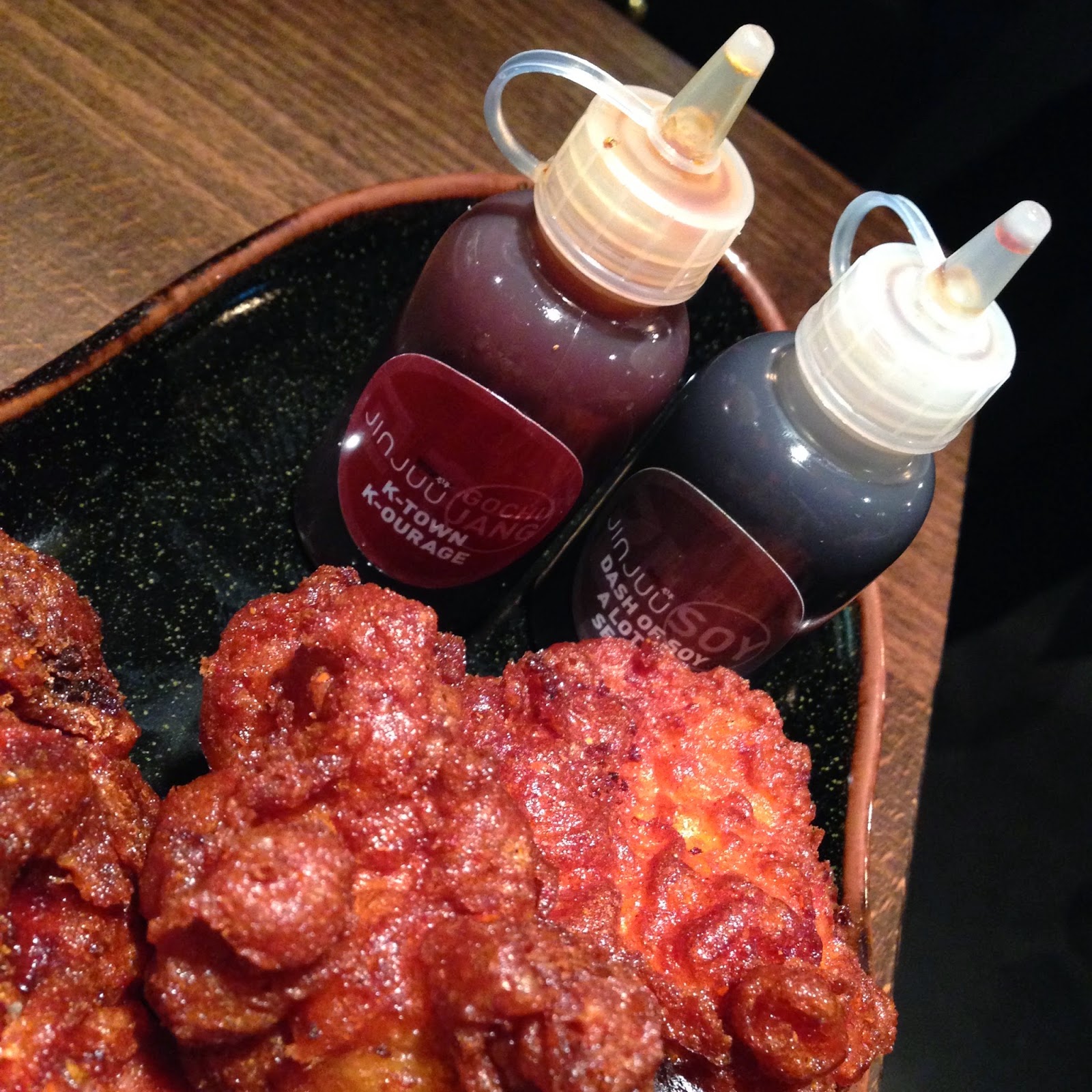 A main course of glazed short rib beef was served the traditional way in cubes with lettuce leaves to heap with meat, kimchi, spiced radish and toasted seaweed. More of that sauce might have made its way into the parcels too. Alongside the beef are chargrilled vegetables and garlic chips which add another flavour and texture dimension.


The only thing that made me sad was that it was USDA beef; we have very good cows in the UK you know Judy! 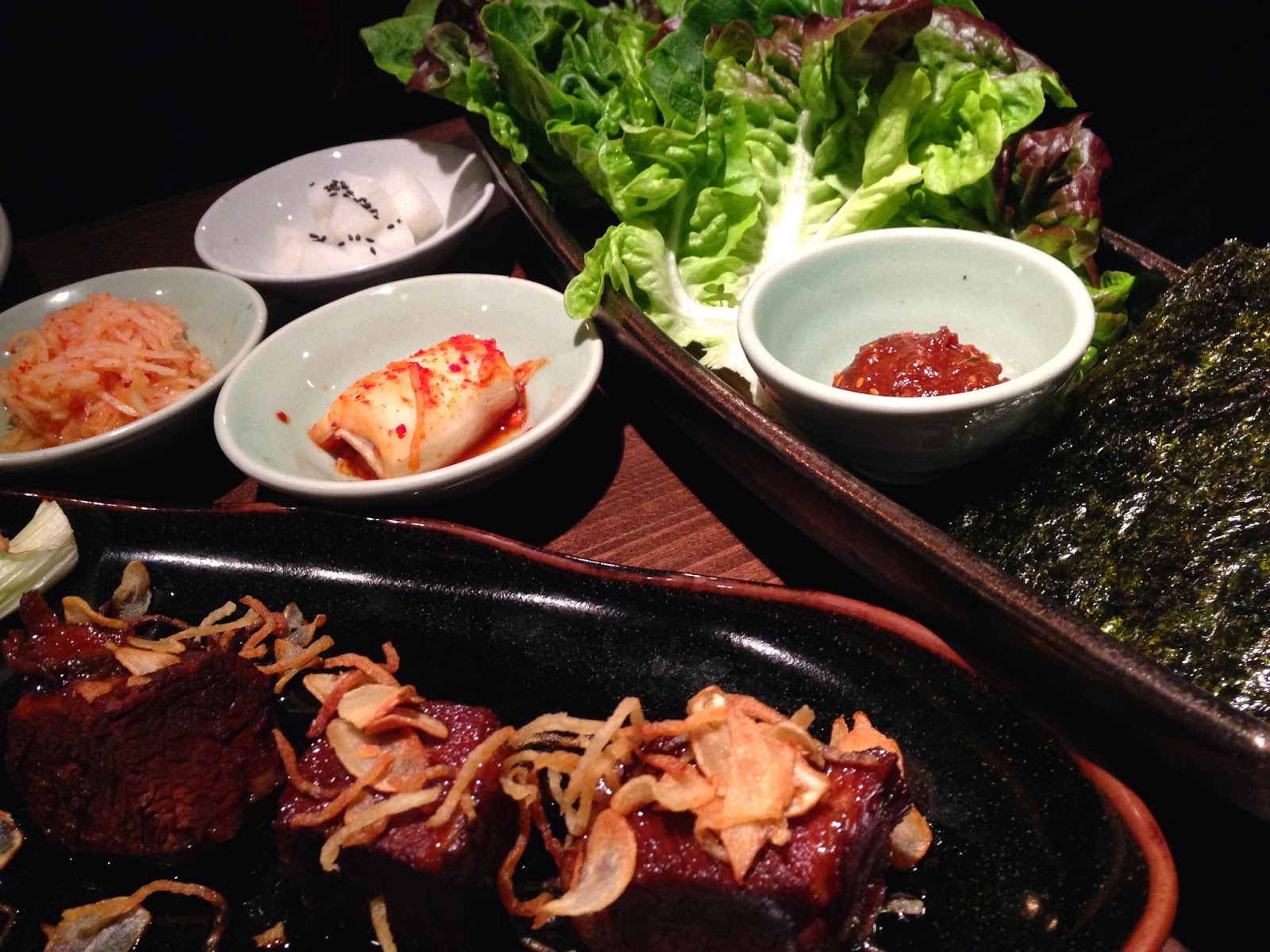 Whilst the wine list isn’t bad, it also didnt thrill me so I’d recommend cocktails as the way to go, especially as all the staff seem very empassioned by them! I tried a Lychee Lover; lychee liqueur, champagne   – possibly the prettiest smelling cocktail you could ever try, almost wearable as a perfume. Gun Bae!

My pictures do not do the desserts justice. Quite often in Asian restaurants desserts are very much an afterthought but here they are just as perfect as the savoury food. Not surprising as the restaurant has a dedicated patisserie chef in the form of Jaime Garbutt who has just as impressive a pedigree as the other chefs having worked in various classic restaurants of the non-Asian variety such as Petrus and Ottolenghi. Its fair to say that they aren’t Asian desserts but desserts with an Asian twist.

A yuzu pudding cake was served with sesame tuile biscuit and coconut ice cream. Yuzu is apparently called Yuja in Korea but its the same delicious citrus flavour (I always think its somewhere between lime and grapefruit). The sesame tuile was quite strongly flavoured though so a little more yuzu would be great. 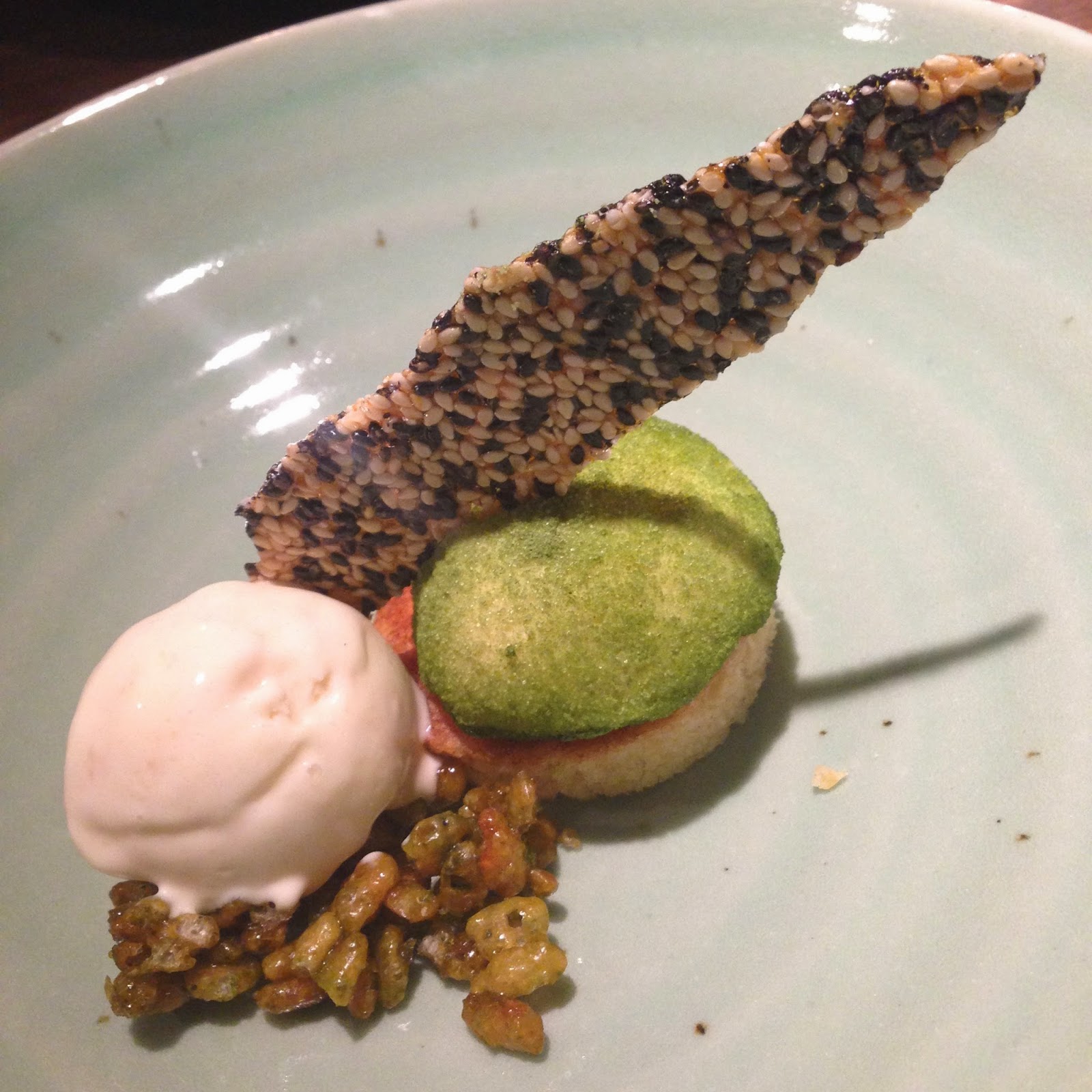 The  next dessert was essentially a very fancy version of a Snickers bar. A heavy, creamy peanut parfait is served alongside an oddly (but not unpleasantly) chewy doughnut thing filled with sweet sesame and salted caramel. A rich, thick chocolate ganache and lashings of crunched caramel crumbs balance it all out texture wise. 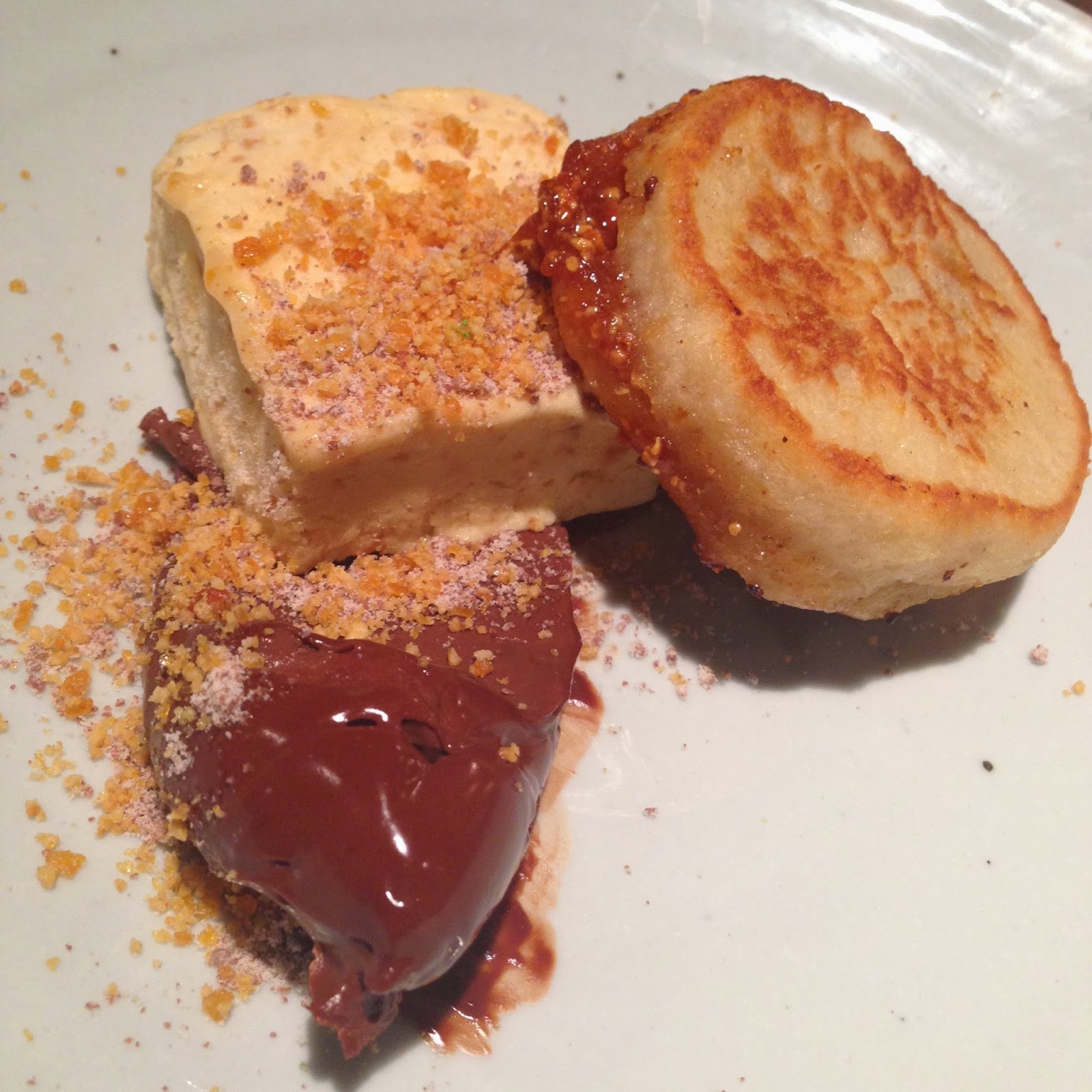 
Would I go again? In a flash! I tried booking for 4 days later but they were already full. In good news though apparently they are soon to introduce lunchtime take away so we can keep getting a fix of that food without going through reservation hell.


Summary: Proper Korean meets Soho cool but you for once you can book!

8/10  Would have been 9 but I’m taking a mark off for the annoying habit of the card machine asking you to add a gratuity when service has already been included. Its a pet hate and I’ve mentioned it before but it feels a little grabby and deceptive. That’s my only negative.