Waking up on a Sunday to a gloriously sunny (and unseasonably warm) Paris morning and it would be churlish to do anything other than go for a long stroll through the streets of the Left Bank. Meandering up to the Musée Rodin to do a bit of ‘thinking’ followed by a roam along Rue du Bac gazing into the windows of all those wonderful patisseries 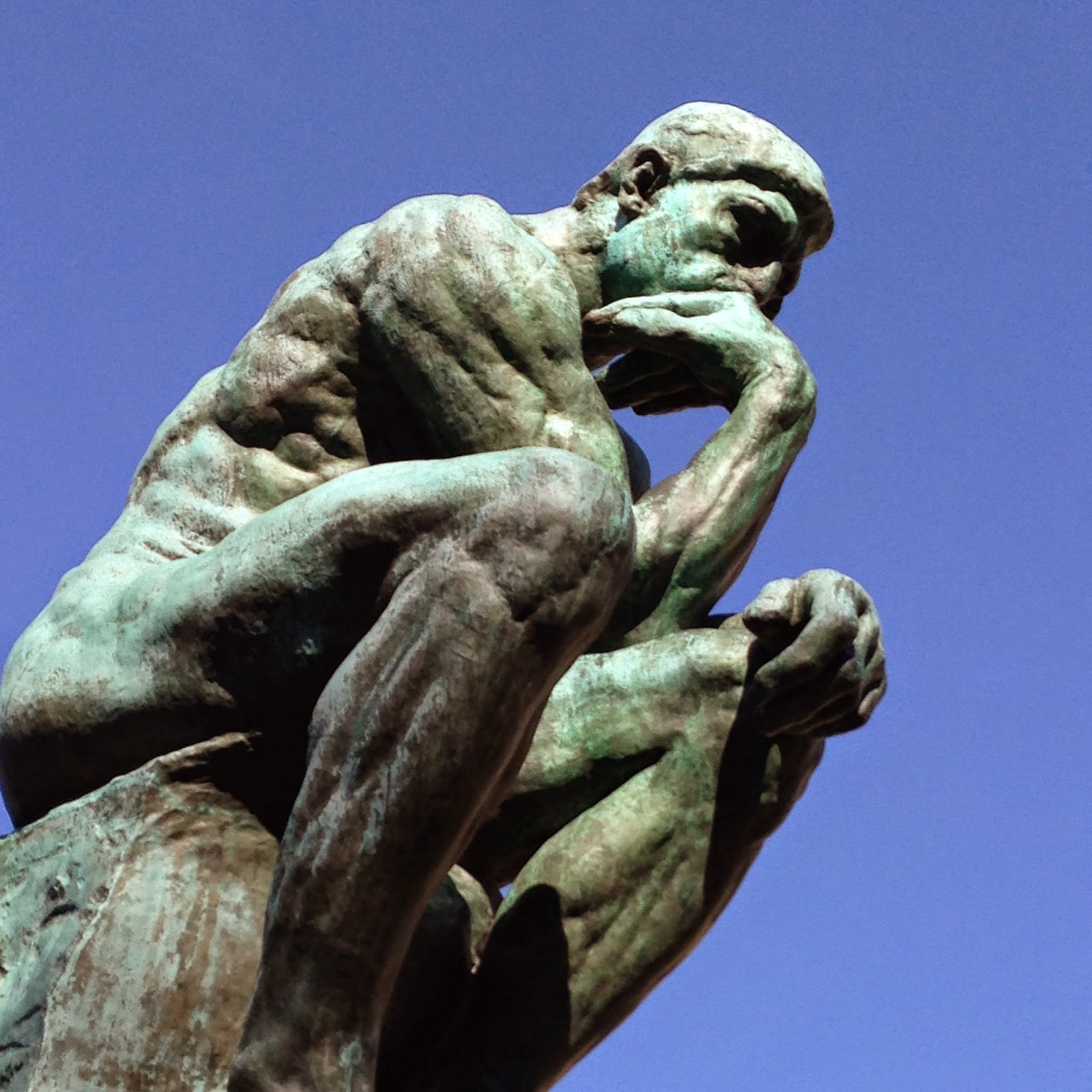 Several hours and a labyrinth of St Germain streets later and we had built up quite an appetite which brought us to the door of Paris institution Brasserie Lipp. 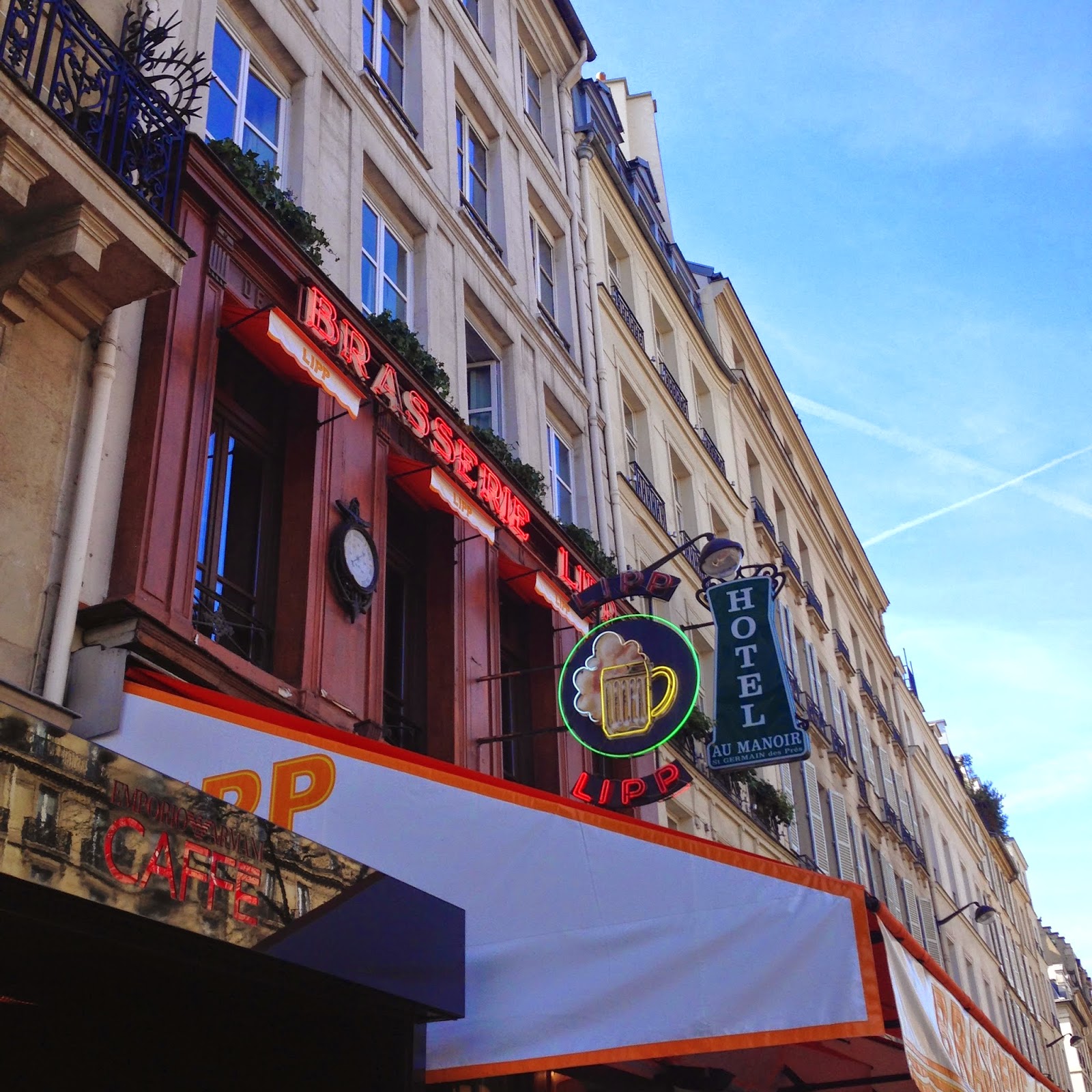 Notorious as the place for Paris’ artistic and political intelligensia to see and be seen, at first glance you can imagine that it has changed little since its inception in 1880 despite its purchase in 2002 by French Restaurant group Bertrand.  Painted tiles and notices to clients in classic unmistakably French font dot the walls. 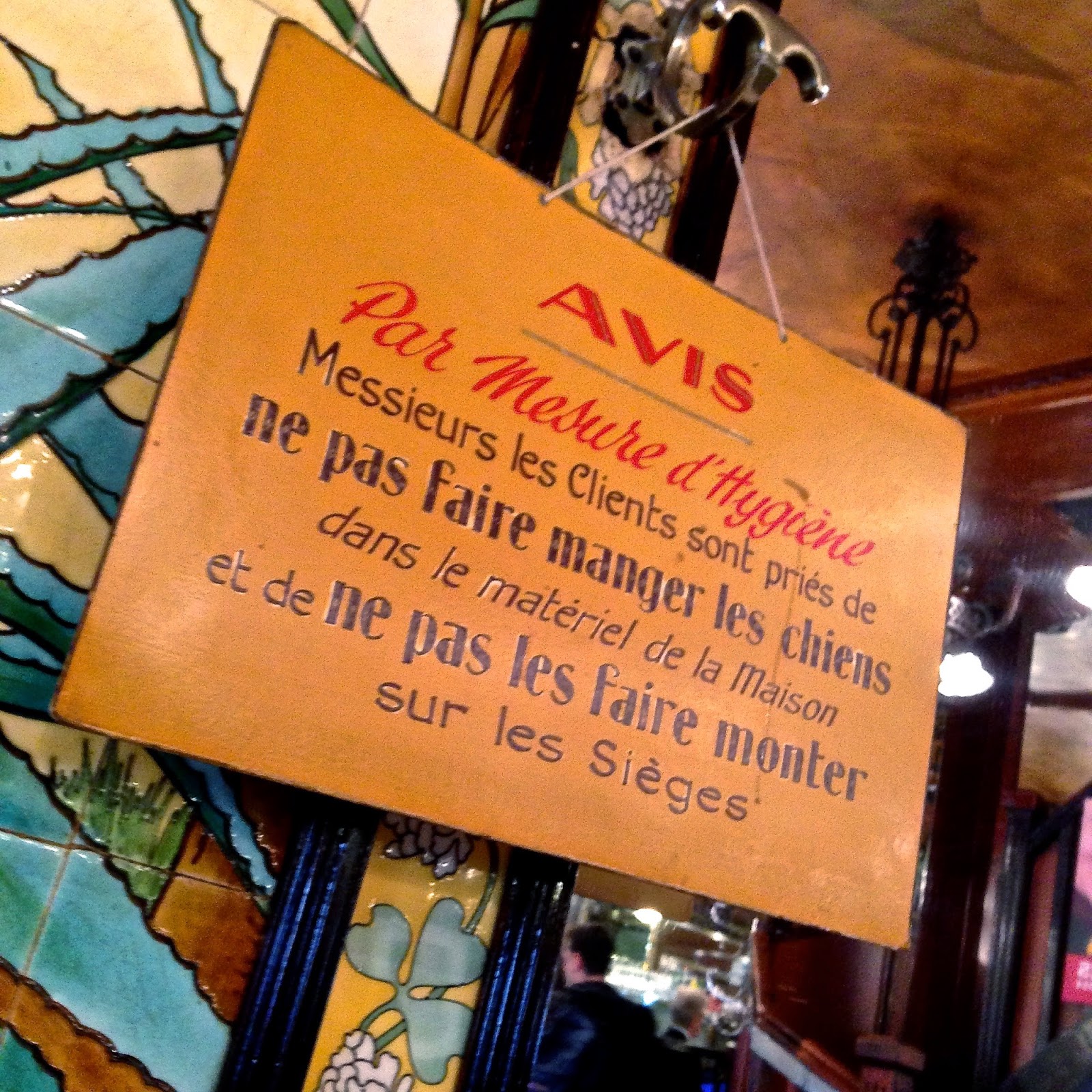 All eyes are on the door as the next people wander in and your rank as a diner can be measured by where you are sat and how effusively the maitre d’ and waiters kiss you on arrival.  Although a lot of the customers are elderly and well groomed, even on a Sunday, the room was smattered with tourists and as we were leaving Roman Abramovic and Dasha Zhukova were being ushered through so if its good enough for an oligarch….. 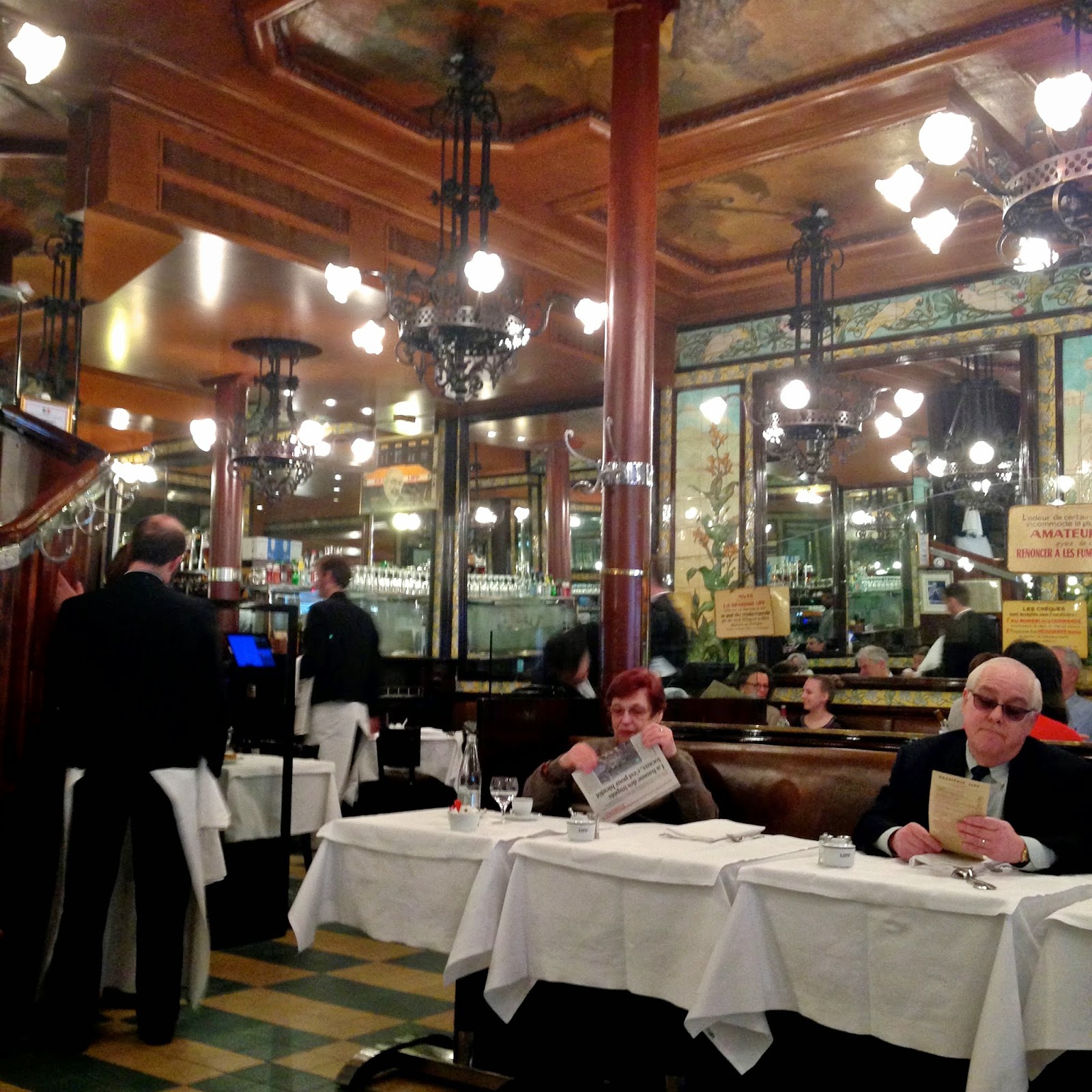 To a degree its a big cliche but its a fun snapshot into Parisian old school society without a stupid price tag. After all, anywhere where the menu has to point out in big red letters that salad is not a meal and that 500 Euro notes are not taken must have an intriguing clientele. I’m not sure whether it says more about me or them but I genuinely had no idea such a thing as a 500 Euro note existed let alone that its prevalent enough to require routine refusal. 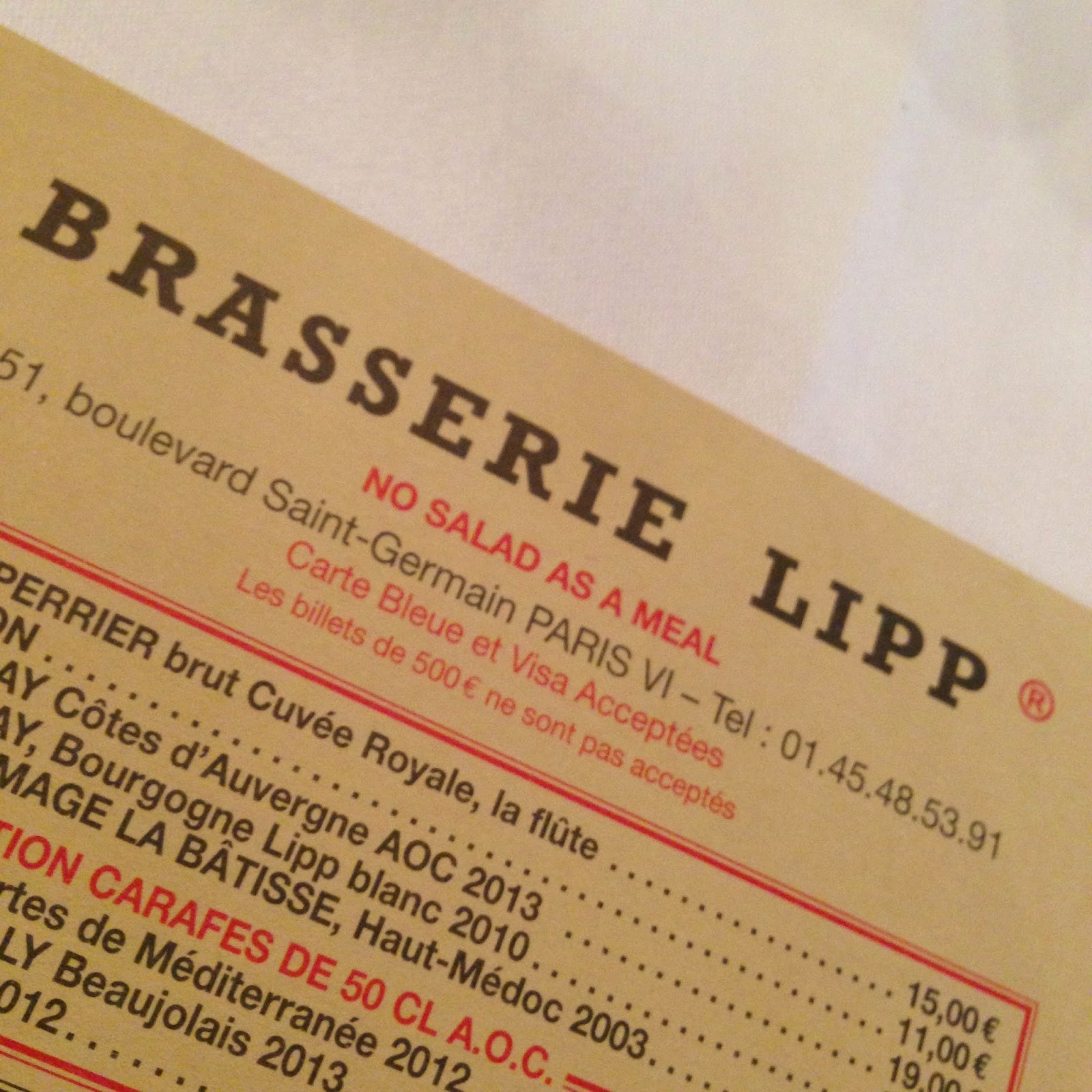 Still, there are plenty of places I could name in London where its all about being seen and the food is, frankly, a secondary consideration so I was intrigued to see if its the same at Lipp.

Although snails are only listed by the dozen on the menu, you can have a half dozen with plenty of baguette to mop up the garlicky ooze of butter. Let’s be honest- and sounding a bit of a philistine I’m sure- few people really differentiate between the quality of the snails, its all about that lurid green butter. 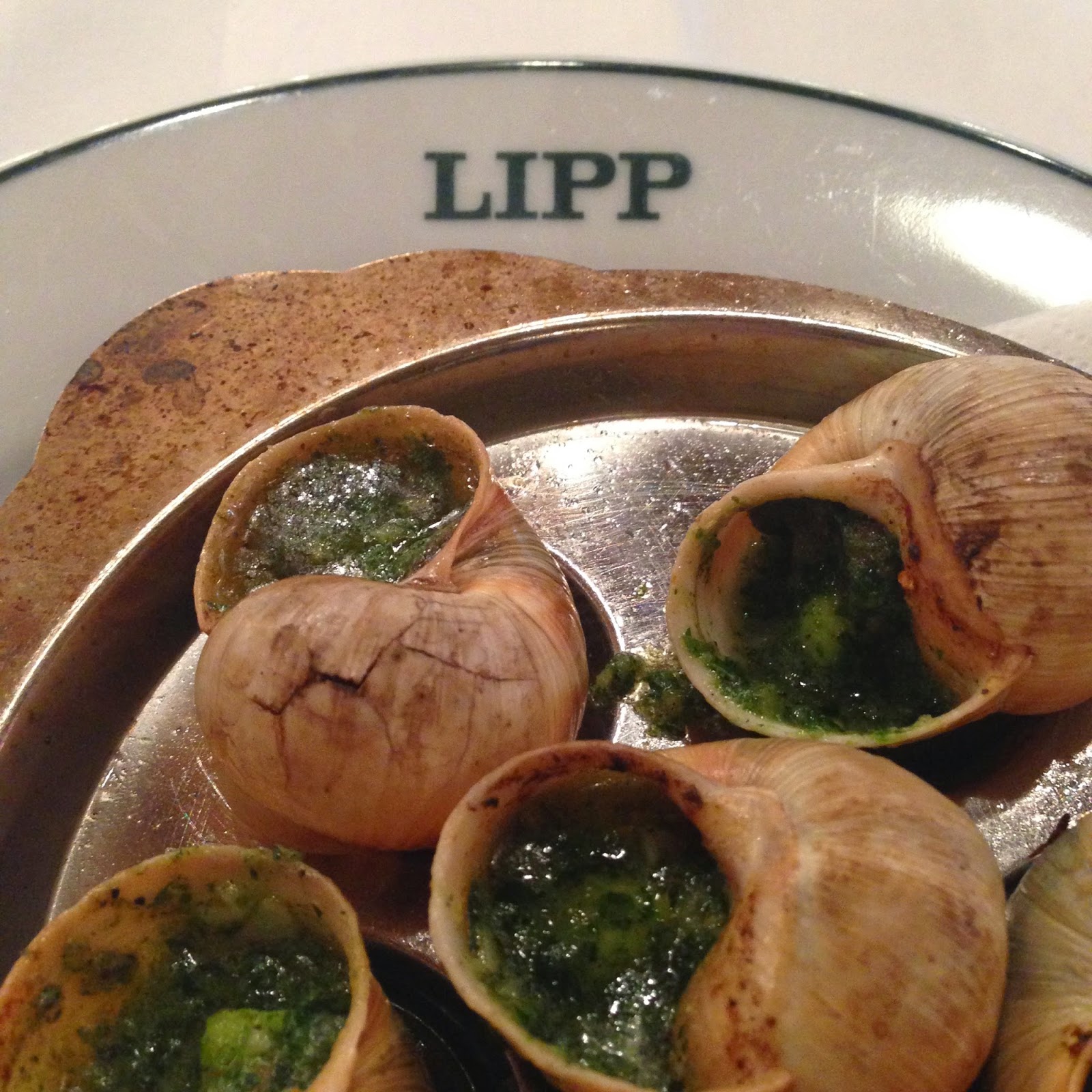 Carrying on with the classics I went for the steak tartare. For me it was a little overly finely chopped as it was more like a steak purée but the flavour was great. Capers, onions and egg already mixed in. The thinnest of allumette fries liberally dusted in salt completed the dish. 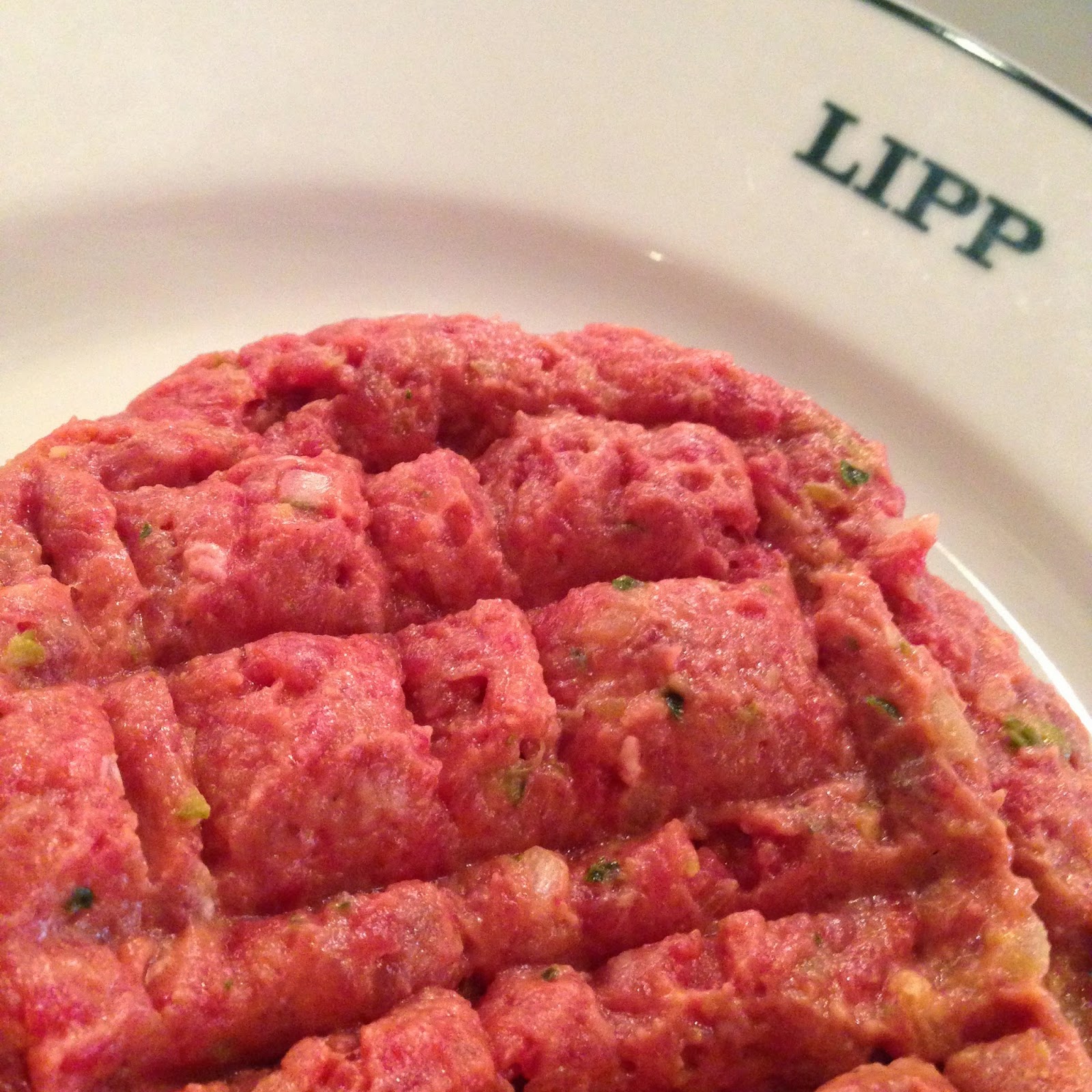 My love affair with the tarte tartin started about 25 years ago on a childhood holiday on the French Atlantic coast. The English version of the menu had translated it as “apple tart’ and I had expected something like the apple pie I was used to at home. What arrived was an iron skillet containing a steaming, golden dish with the most beautiful caramelised apples roasted down until just barely holding their form for long enough to make it into your mouth before dissolving into a sweet, citric burst.

This one was served with sour cream which is just a little wrong to my sweet palate. 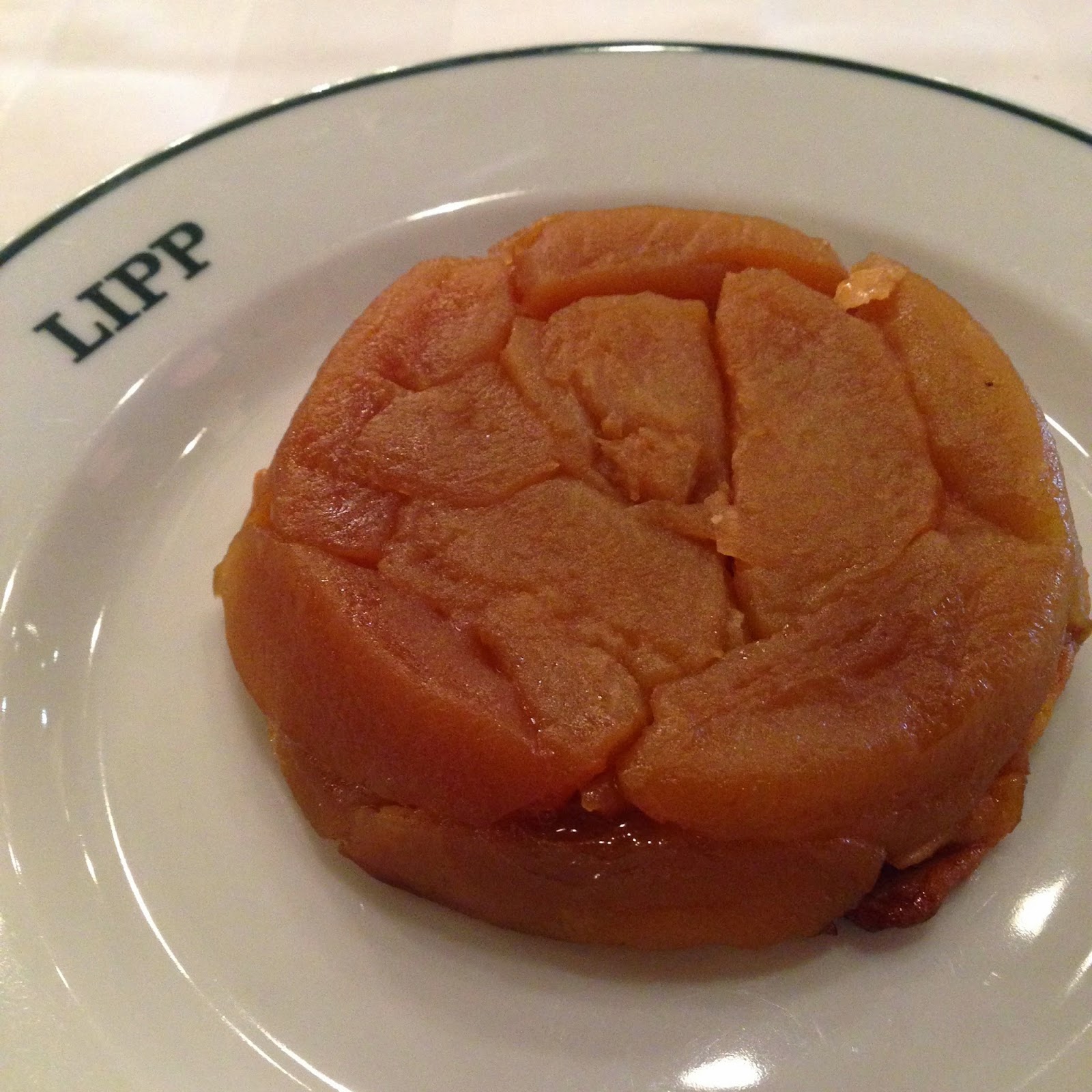 A Parisian lunch would not be lunch without coffee and like everything else Chez Lipp its branded to the hilt! 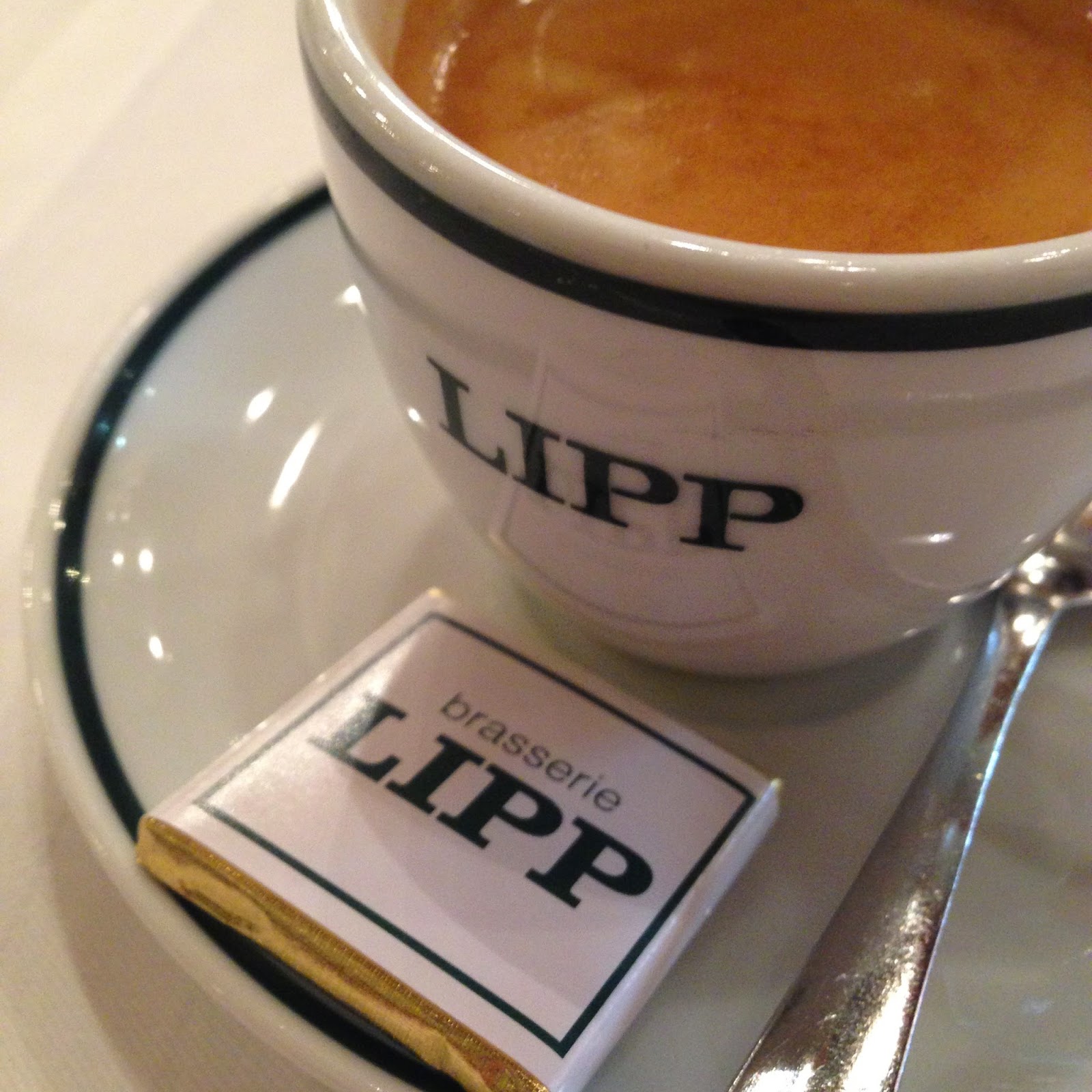 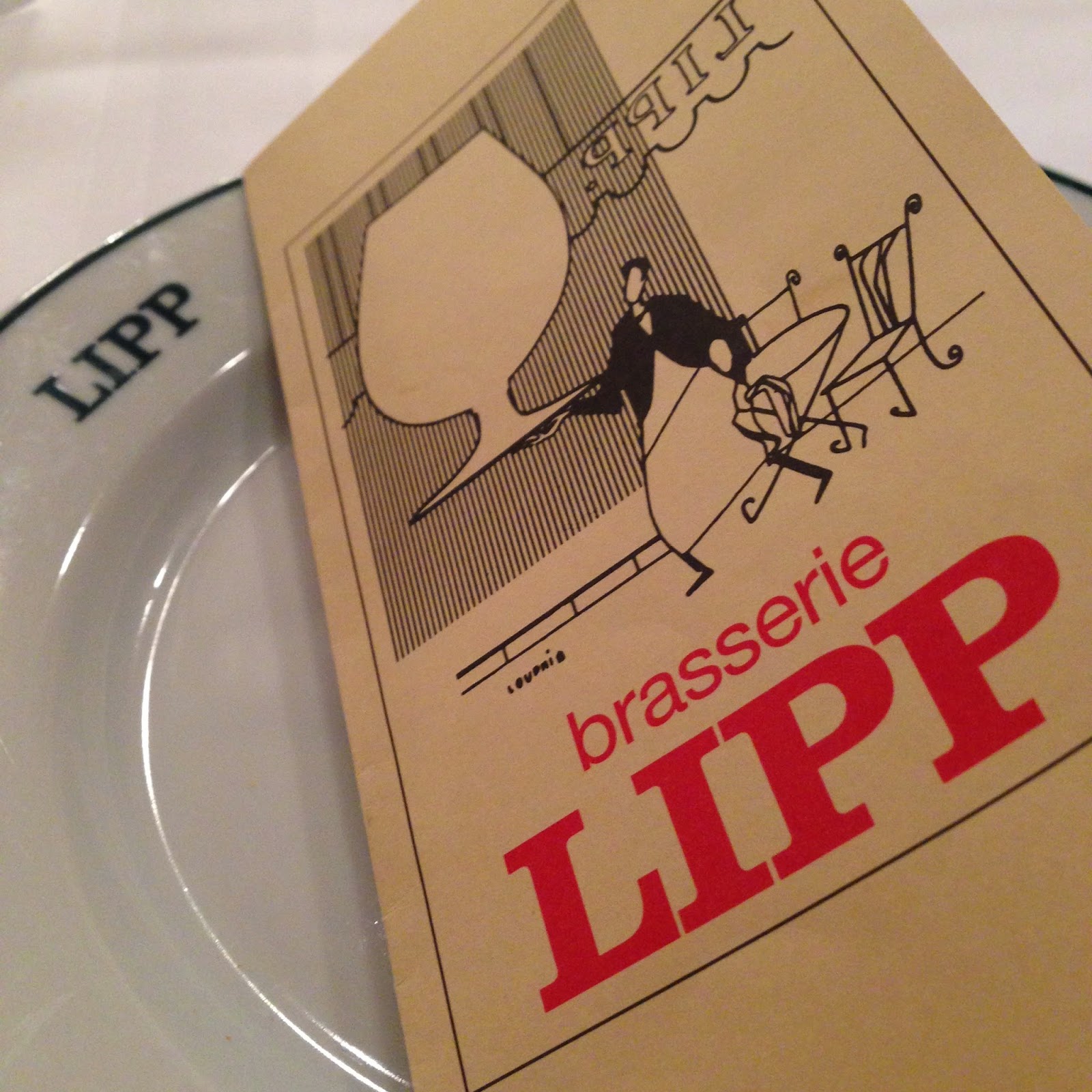 In summary: Its maybe a little pricier than some other brasseries but you know you will get reliably good French classics with people watching opportunities second only to a copy of Paris-Match.


Would I go again? If I was in the St Germain area then yes definitely but there are so many classic Parisian brasseries to try and so few trips to Paris sadly that I would probably spread the love in future.