I made a decision a while ago that I was going to be less negative on this website. Despite people clearly preferring reading an article when I get the semantic daggers out (the website stats are testament to this), the places I am writing about are the result of someone’s hard work, hopes and dreams and who I am I to trample all over that? It was all going so well until I had the misfortune to need a quick supper in Borough one Saturday late afternoon. 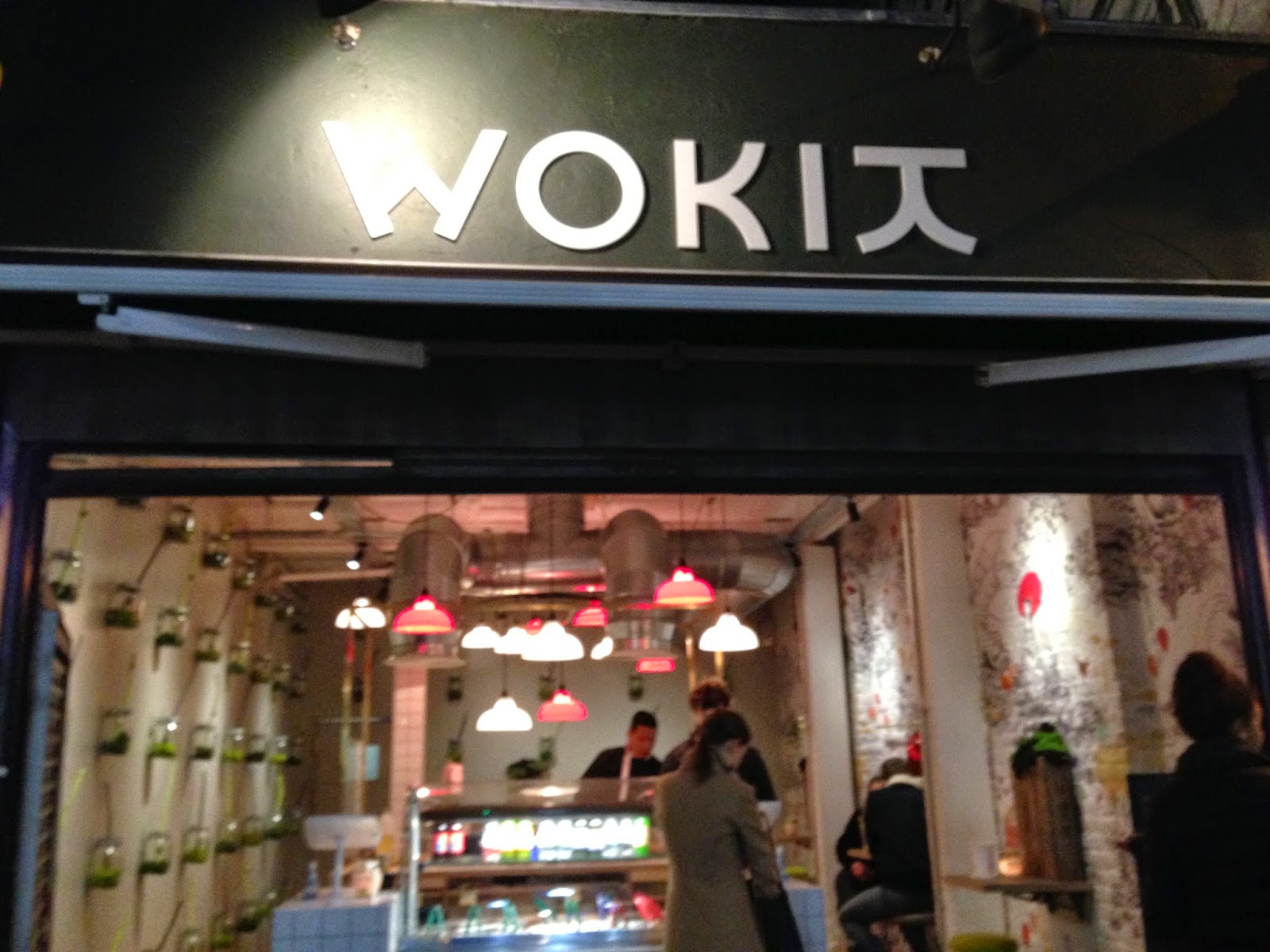 Everyone knows that Borough Market is home to some of the best food that London has to offer right? Especially tourists who flock there in huge numbers expecting everything to match up to scenes from Bridget Jones’ Diary or the Trip Advisor reviews – I particularly loved a recent one penned by Ted in California who proclaimed it “without a doubt the best market in Great Britain” – granted it’s good but I do question how many others Ted might have visited to make such a sweeping statement.

So its a bit bloody annoying when someone takes a lease on a unit right in front of the market and sells what is, frankly, very average food at hyper inflated prices with a “concept”. 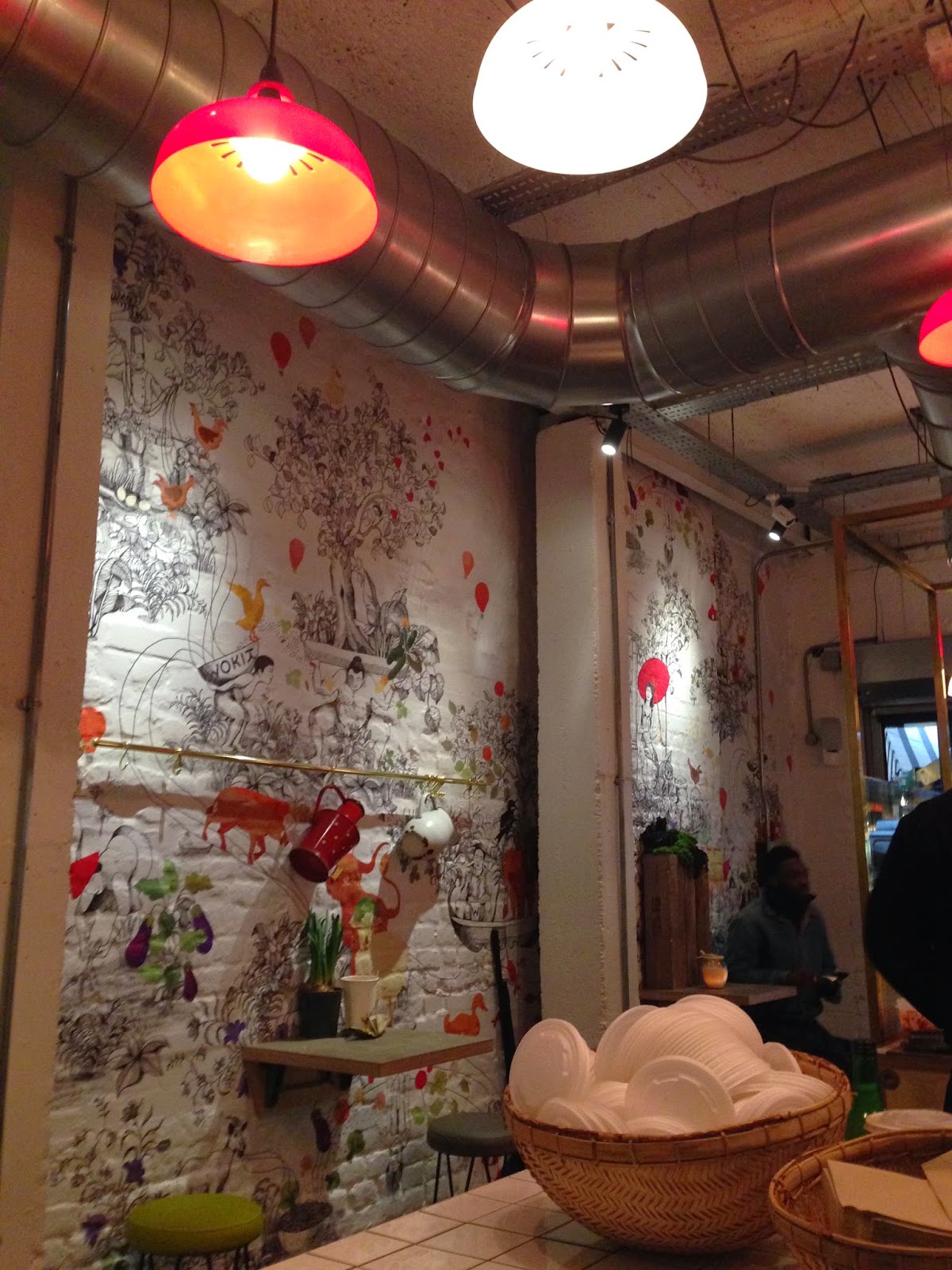 The model at Wokit is, in theory, a decent and well-meaning one. A fresh stir fry using organic vegetables from neighbouring market trader, Ted’s Veg, served within only a couple of minutes to eat in or take away. You pick your protein, pick your carbs and pick your sauce. Standard veg such as bean sprouts, cabbage and carrots are included and you can pay a supplement for extras. Here is where things start to annoy me. £4 for the basic noodle or rice mix. Not bad value. Add in a protein at £3 and start adding the sort of vegetables you would expect to see in a stir fry and the prices start shooting up at an alarming rate. 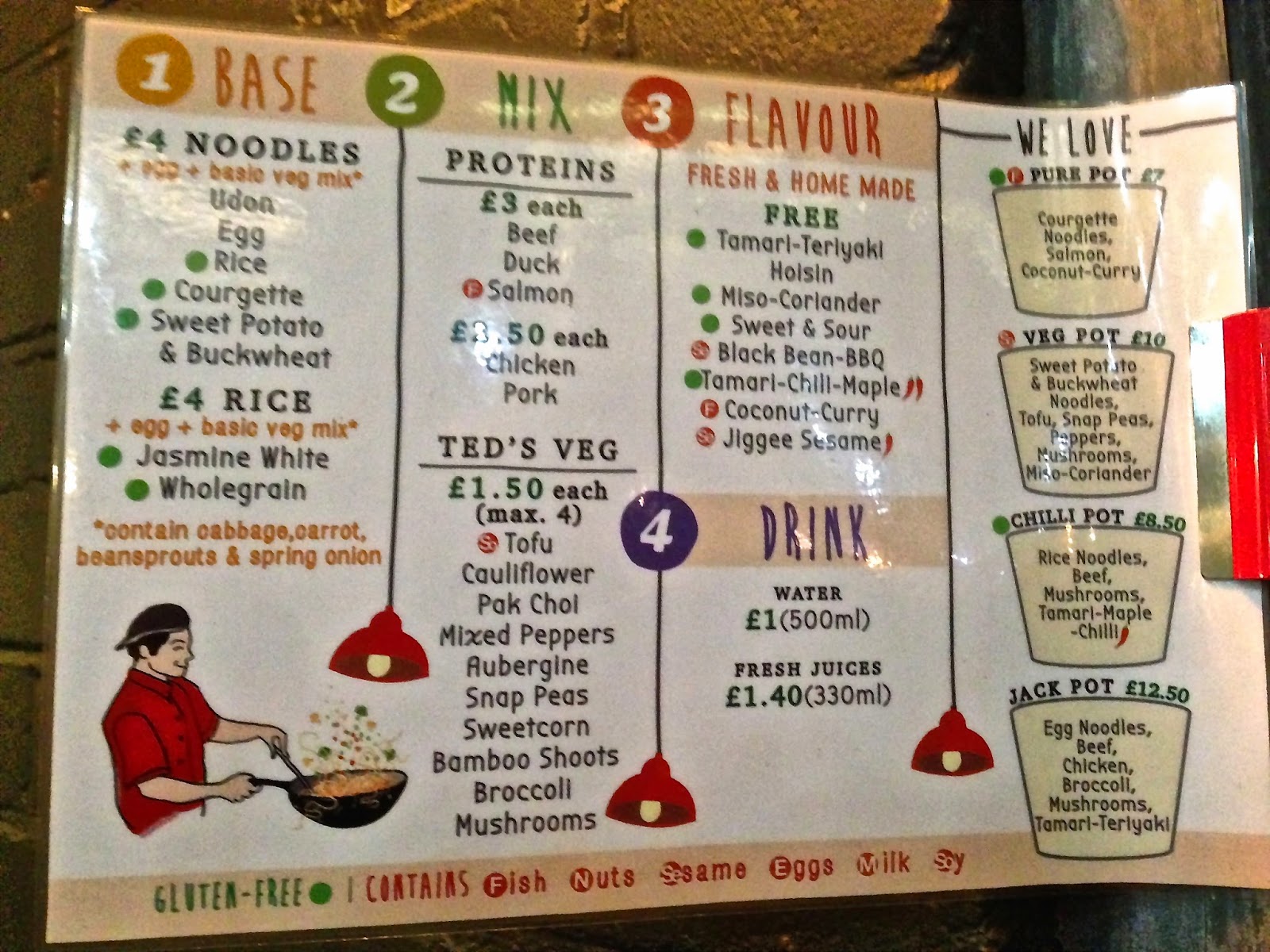 So basically if you have one protein with standard noodles and a sauce its a minimum of £8. Getting something approaching what you might sling into a stir fry at home (handful of mange tout, couple of peppers) will cost you in the region of £12 upwards. Throw in some fancy apple juice because they don’t sell many “normal” drinks and you’ve peaked £15 to sit on a stool in what is little more than a shed (albeit a very prettily decorated one) and eat fast food.


An objection to paying £12 for a stir fry may sound ridiculously hypocritical coming from someone who has willingly forked out (pun intended) in excess of £300 for lunch but here is where my food philosophy holds firm: 1) It’s not about cost, its about value. A meal can be £3 or £300 but if its excellent quality and cooked well, that’s what matters. 2) It’s also about the experience. I have been made to feel like a million dollars in a neighbourhood pizza joint and like something iffy on the sole of a shoe in Michelin star restaurants and, regardless of how good the food is, trust me, it clouds your judgement. 3) if you ever find yourself questioning any of the above whilst still in the establishment or at any point afterwards then its an automatic fail.


Therefore, applying my own rules, I would not object to paying upwards of a tenner for a really nice stir fry served with a smile. That’s not what I got when I visited Wokit one early Saturday evening though, oh no.


At the till I was met by a skinny jeaned, beanie wearing chap who was most definitely more disgruntled by my interrupting his conversation with a mate than he was interested in taking my order. Order finally placed for stirfry and a bottle of juice and I had the temerity to ask for a cup to put the juice in. Apparently that was a crazy-assed request as most people just swig the juice from the bottle. I attempted compromise and suggested a straw. Nope, no straws. No cups either apparently unless you count the giant ones that the food is served from so I sat there with three inches of juice in the bottom of a cup the size of which has only previously been seen used for drinks by a borderline-diabetic chugging Dr Pepper in a Texas branch of Taco Bell.

Because the meats are already cooked before the stirfrying begins they do not have the opportunity to take on the flavours or moisture of the sauce meaning that you end up with rather bland chunks of dry meat proliferating the paper cup. Yes, its fresh but the result is not very flavoursome. The sauces are nothing novel and bear startling resemblance to those found in most takeaways (without the MSG granted). 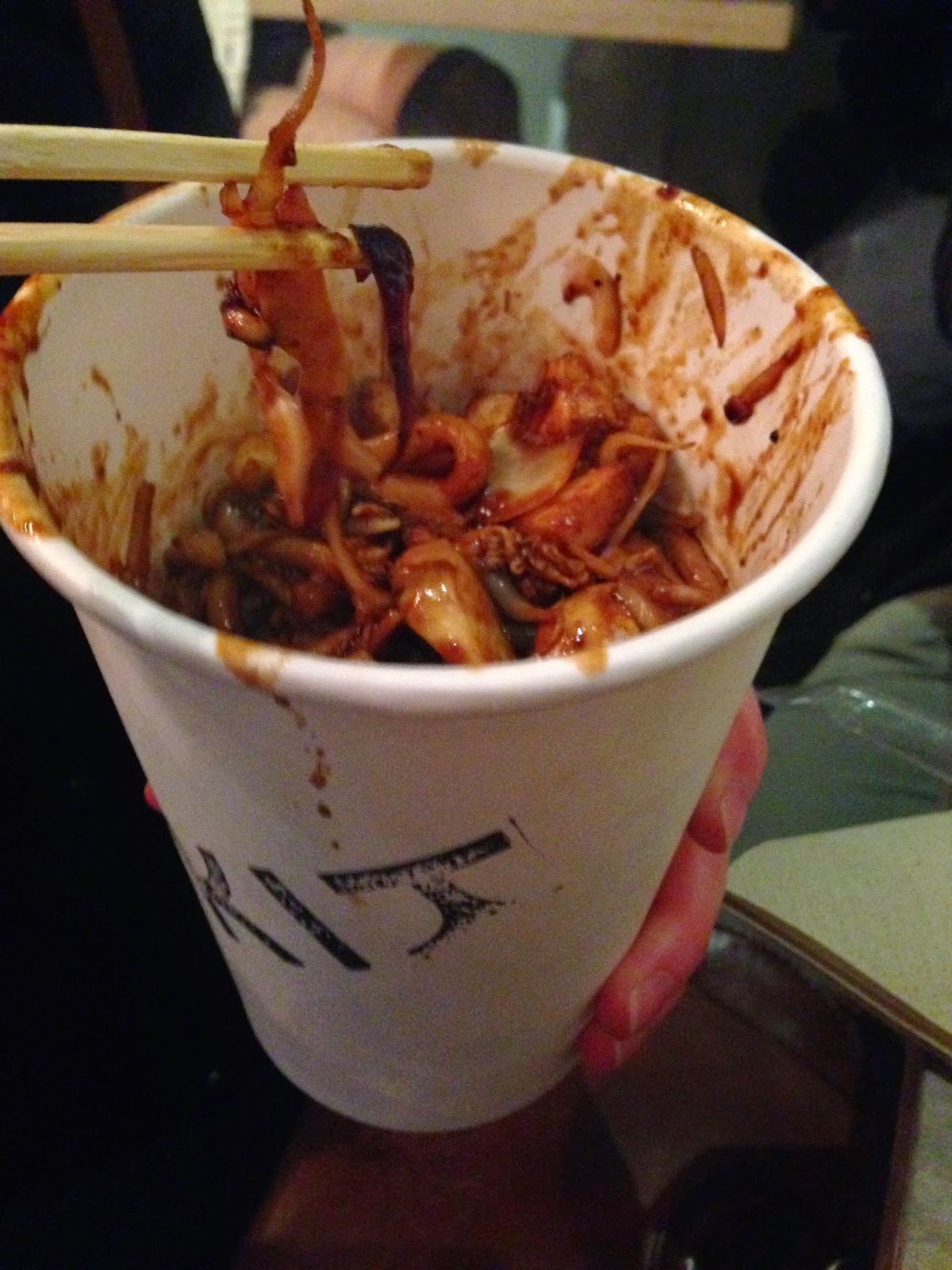 My sweet and sour pork was almost fluorescent yellow and very, very sweet. I ate less than half. Being positive (and I am trying, honestly!) the vegetables were very fresh. 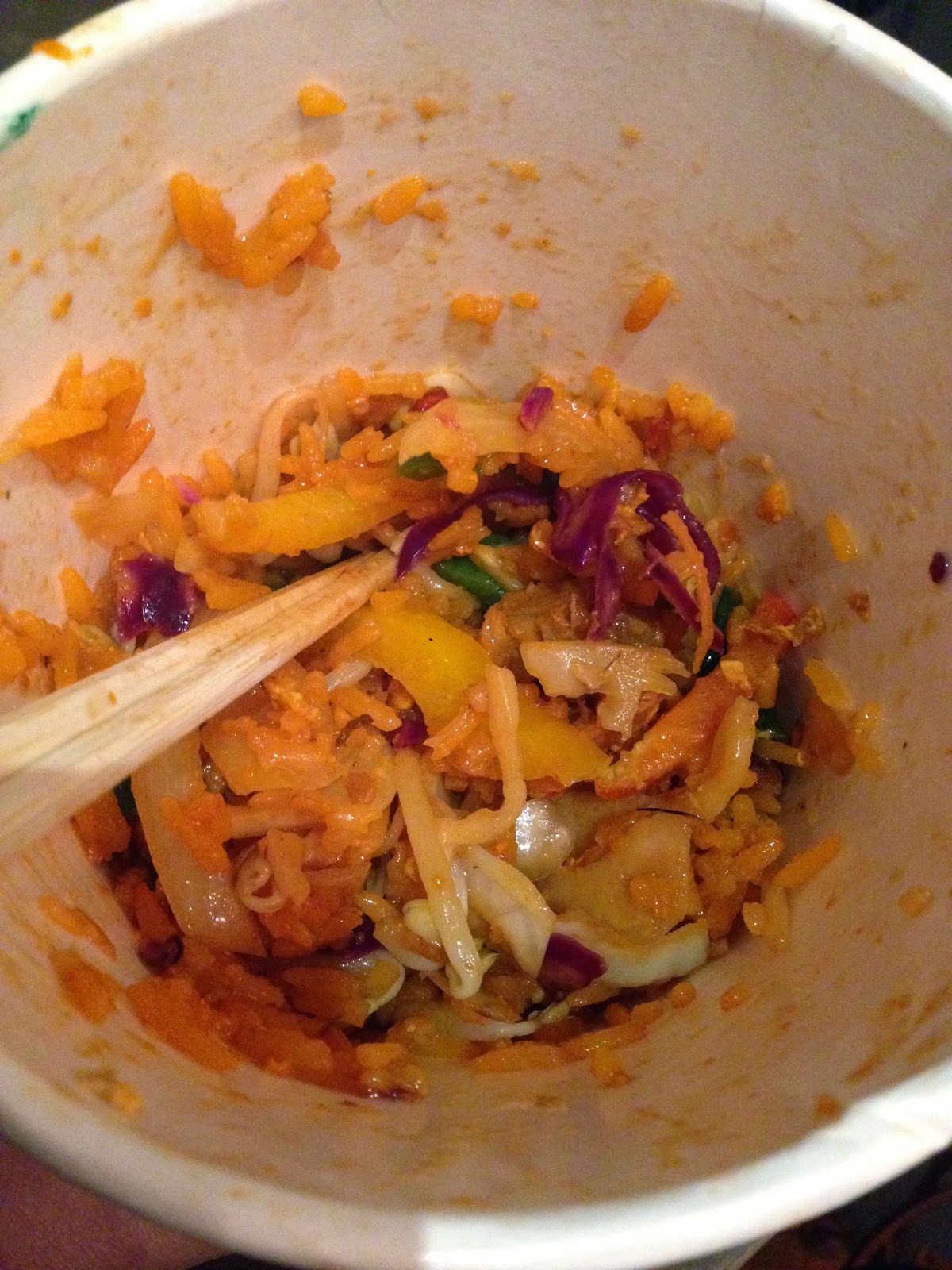 Wokit is an example of an exercise in marketing and “concept” over execution. The website is a perfect reflection of this less savoury side to the London restaurant scene right now where food and service take second place.


Their website is a case in point. Cartoon cows and smiling sheep proclaim their ethos to be “fun”, “sustainable”, “wholesome”, “community”,  What does “Community” even mean as a description of an eatery? (as much as I hate the word ‘eatery’, I can’t bring myself to call this place a restaurant). The website gives plenty of air time to the “social media consultant”, the “brand identity designer” and the “creative director” but if you click on the one picture of the “wokstar” chefs on the team page you get very little information and are taken back to the brand identity designer’s personal homepage.  Despite the emphasis put on the ingredients there is no real information given about them. Where did those chunks of rather dry pork come from (i.e. which poor pig died in vain). If you’re going to harp on about sustainable/ local/ wholesome blah blah, then I’d rather know what makes the ingredients special than the fact that the brand identity designer will also design wedding invites for you. To be honest it smacks of a group of hipster mates hyping themselves up and hoping it catches on as the next big thing regardless of the food being any good.

I don’t care how worthy, entrepreneurial, shiny and happy the whole exercise is designed to be, if it tastes god awful and the service is terrible then its a failure in my eyes, end of.

There are areas in London where there are very few good places to eat. In those areas you accept that the trade off for convenience is less exciting food. This could not be further from the case in Borough. Take twenty steps in any direction and you are tripping over brilliant food and exciting cooking. That is why I believe that its an absolute liberty to serve up this tosh. Please take those twenty steps and find somewhere else to eat, I beg you.

Highlights: The pretty flowers on the wall.
In summary: Opportunistic
Would I go back: Hell, no.